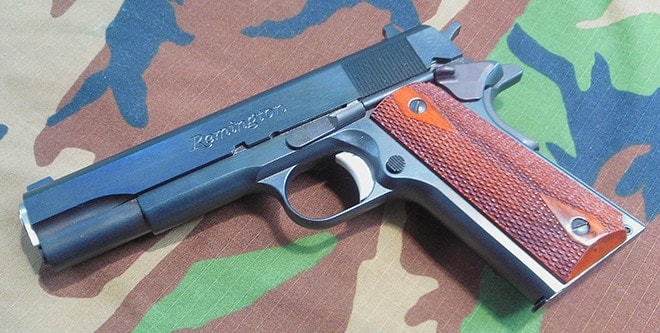 Remington’s R1 is a no-frills design that stays true to the original (more or less). (Photo: Francis Borek)

Think of Remington, and what pops into your mind? Chances are it’s not something good. Perhaps it’s the controversy over the Model 700’s trigger design? Maybe it’s disappointment over the Bushmaster ACR? Or it could be anger over the closure of the Marlin factory and the precipitous decline in quality?

It cannot be argued that many of the Freedom Group’s decisions have proven to be quite contentious (and garnered a seemingly unending string of bad press). Yet there is a beacon of hope for the company, a design Remington flirted with during one of mankind’s darkest hours that, like a phoenix, could prove to be a (partial) rebirth of the brand.

Remington is no stranger to John Browning’s masterpiece handgun, the 1911 pistol, and their R1 1911 handgun in .45 ACP is a testament to this.

During the First World War, the US Army adopted the 1911 design from Colt after a very lengthy trial program, but the Navy and Marine Corps weren’t too impressed and decided to stick with revolvers. However they could plainly see that the future of side arms lay in self-loading pistols and both branches began to put out feelers. To the amazement of the Marine Corps, renowned gun designer John Pedersen whipped up a self-loader chambered in .45 ACP. It used a “hesitation-locked” system and would become the basis of the successful Model 51 series of pistols. 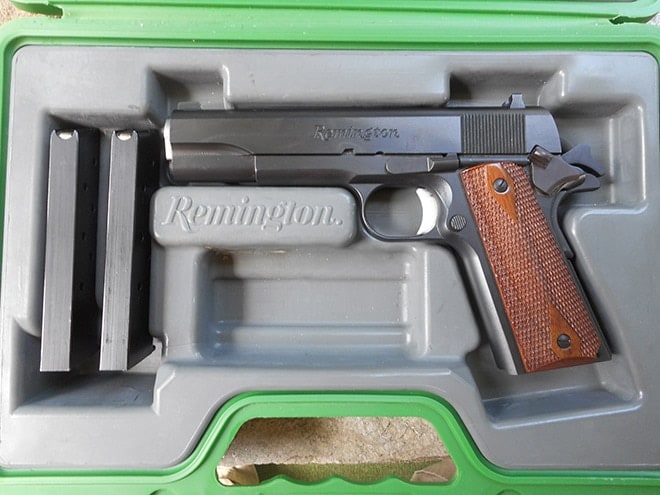 What you get inside big green box is a R1, two 8-round mags, and manual. Not shown is the bushing wrench. (Photo: Francis Borek)

Both the Navy and Marine Corps were suitably impressed with Pedersen’s design, and placed a contract with Remington in 1917. Soon after however, the United States declared war on the Central Powers and the contract was cancelled before any could be built. Remington was instead contracted to build the M1917 rifle for the Army and, in a fit of irony, also received a contract to produce M1911 pistols.

Post-war, Remington produced the Model 51 in a variety of calibers as a compact pistol up until the start of World War Two. Though there exist World War Two-era M1911A1 pistols with the Remington name, these were produced by the unrelated Remington-Rand Typewriter Company. This company was spun off decades before and Remington themselves wouldn’t produce another 1911 until earlier this decade

With the 100-year anniversary of John Browning’s now timeless design approaching, Remington introduced their line of 1911s in 2010, dubbed the R1 1911, to cash in on the craze. A variety of designs have since been offered including tactical models with threaded barrels and VZ grips, long slide variants, officer’s models, and commemorative editions, all in a variety of finishes and calibers. Even the slides and frames vary, with more expensive variants featuring forged frames, with less-expensive variants having cast frames.

The variant reviewed here is the basic ‘USGI’ model — a no-frills, full sized, blued 1911 with wood grips and chambered in .45 ACP and priced as a more budget friendly 1911.

It isn’t too obvious at first glance, but there are casting lines on the frame and rough marks that haven’t been fully polished out. (Photo: Francis Borek)

This Remington R1, like many basic 1911s, has an appearance reminiscent of a surplus USGI pistol but does not accurately mimic one. The sights are large, white three-dot sights that offer good visibility and durability over precision accuracy. The finish is bluing that appears to be more black, but is durable and has stood up to repeated use. Rollmarks are tasteful with the pistol’s name on the right side near the muzzle, and a large company name on the left. Despite this, it is tasteful rather than the ugly billboard rollmarks seen on many 1911s these days.

The trigger is aluminum and, rather oddly, a short trigger. Though present on the 1911A1, short triggers have fallen out of favor with most shooters. The mainspring housing is flat, steel, and has vertical serrations. There is a tiny notch in the top of the chamber to act as a loaded chamber indicator. The barrel bushing is, strangely enough, stainless. The double-diamond grips appear to be wood. The key word is ‘appear’ and they are so heavily varnished that it’s easy to mistake them for plastic. Overall however the R1 succeeds in giving off the appearance of an old-school, USGI 1911 save for a few quirks. 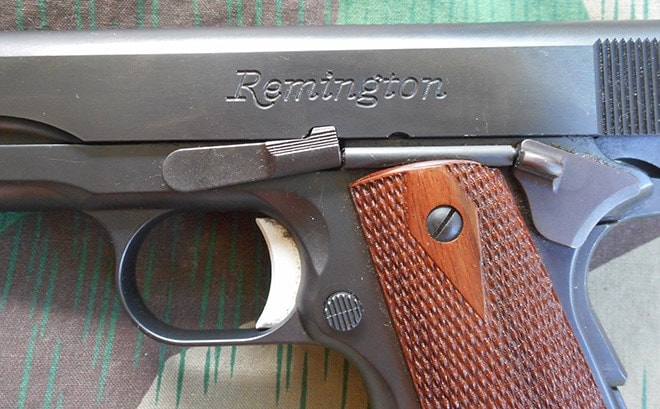 On the shooting range, the sight picture is a bit “bulky.” The sights are large and easy to pick up, but will hinder precision. However this pistol isn’t really marketed or offered as a precision target piece. The ergonomics are what you would expect from a 1911, that is to say “really good.” One of the reasons why JMB’s design has endured through the years are those ergonomics and the R1 1911 does nothing to change them.

The safety on the R1 is easy enough to hit, though rather strangely it is the early variant of the safety. This was replaced with a much larger variant on the M1911A1, so it’s a little odd to see it here. Replaced because of complaints that it wasn’t easy to manipulate, I had no issues here. The double diamond grips also offer enough traction to manage the recoil of the .45 ACP, even after lengthy shooting session and sweaty hands. The slide is also easy and smooth to manipulate, not like several other 1911s in it’s price range. 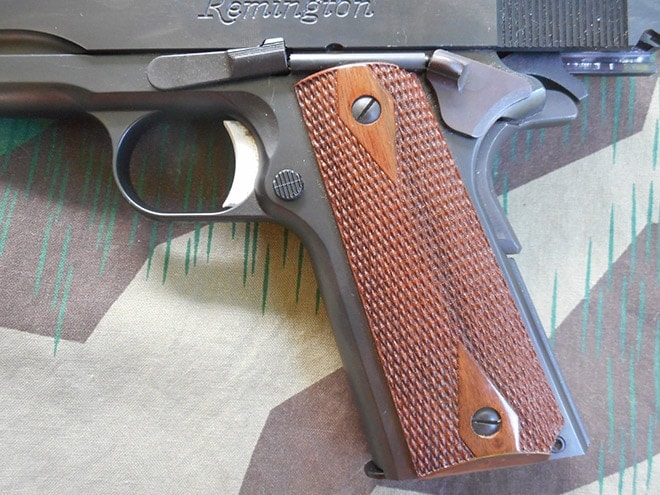 Closeup of the short trigger, safety, and over varnished grips. (Photo: Francis Borek)

The trigger is… kind of strange. I expect a nice, clean break with 1911 triggers. Yet this one is a tiny bit mushy, though that could be from the Series 80 safety. On the way to the break, there is a tiny bit of travel to get there before it finally breaks around 6-7 lbs. I found that the trigger reset is also short and rapid fire strings are quite fun with the R1. Not a great trigger by any means and certainly there are trigger snobs furiously typing up how their $2000 Ed Brown has a better one. But one has to remember that this gun was purchased for $629 and was not marketed as a slicked up competition or custom piece. For the price, this gun works.

With Federal 230 grain FMJ, I managed to bring in a five round 2 inch group, standing, two-handed, at 10-yards. CCI Blazer 230 grain FMJ brought in the same group, while Tulammo steel cased 230 gr FMJ brought in 3 inches. For me, that’s perfectly acceptable. 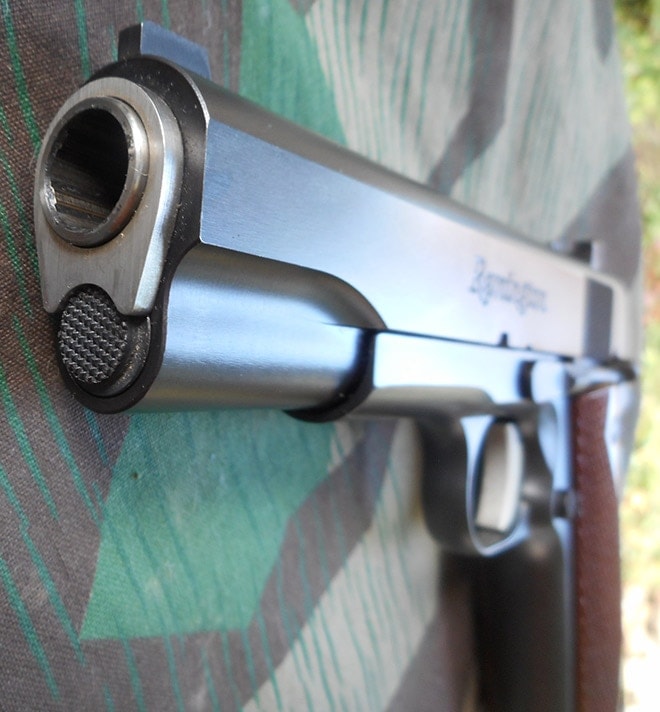 A stainless bushing is a rather uncommon sight in budget 1911s. (Photo: Francis Borek)

Despite this, the R1 1911 is a step in the right direction. It is a nice, affordable 1911 that will give many shooters plenty of service for whatever they choose to use it. Though Remington’s more recent forays into the handgun world have shown to be a bit of a disappointment, their R1 1911 keeps chugging along. Although they tried to modernize John Pedersen’s famous Model 51, they simply couldn’t, but when they kept to John Browning’s original design, it works. Simply put, the R1 1911 is an affordable and reliable option in the world of 1911s.