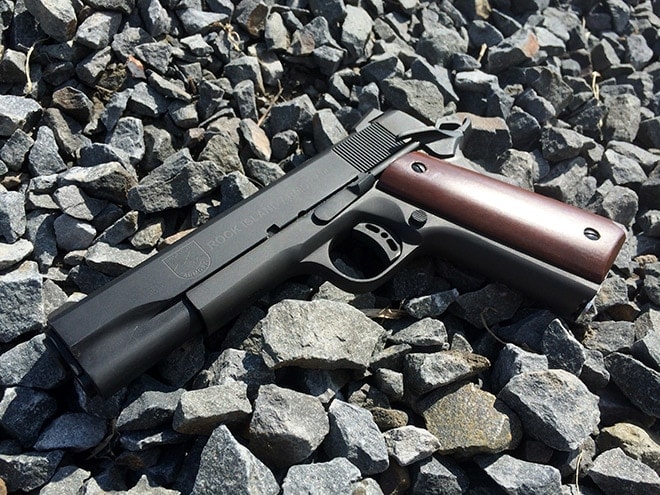 Would you believe that a Rock Island Armory 1911 has claimed a competitive shooting national title? It has — back in 2013, Mike Seeklander won the inaugural IDPA Back Up Gun Nationals (SSP Division) with a RIA 3″ 1911 in 9mm.

Armscor, the parent company of Rock Island Armory, originates from the Philippines, and has had guns on the U.S. market for some time. The Rock Island Armory brand was acquired by Armscor in the 1980’s shortly after Armscor Precision International opened its first office in the United States. Since then, they have run with it and grown the brand into what it is today. Rock Island Armory is one of the largest producers of 1911 frames in the world, manufacturing frames under contract for several other firearms manufacturers. More recently they have moved some manufacturing to the United States and have been updating their branding, coupled with a renewed push to increase their presence on retailer’s shelves. In 2015, Armscor/RIA inked a deal to be in all Cabela’s stores across the United States.

My introduction to RIA was about five years ago, well before their big push to get into the market, with a single-stack, 9mm RIA 1911-A1 Tactical. The reason I went 9mm instead of the more traditional .45 ACP is that 9mm is cheaper that .45 ACP. It is also better suited to the “shooting games” that I wanted to use this gun for, essentially club level IDPA and Steel Challenge matches with an occasional class sprinkled in to keep things fresh. I was well aware that 9mm and 1911’s don’t always get along, but for the guns intended purpose it was an acceptable risk to take.

Out of the Box 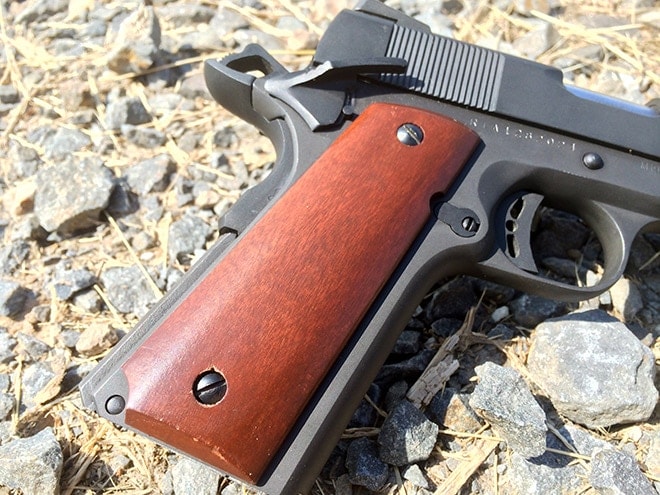 When you open the padded hard plastic case that the Rock Island Armory Tactical comes in what you find is a gun parkerized from muzzle to main spring housing, including the sights. While the sights are acceptably large and more useable than the traditional GI style sights, the parkerized finish does not lend itself to picking up the sights quickly or tracking the sights during recoil if shooting against anything but a very light colored background (i.e. white or light grey).

The grips are a smooth wood, which aesthetically look fitting on the pistol, but functionally provide very little purchase to anchor the gun in the shooter’s grip. There is a much appreciated beavertail grip safety to prevent hammer bite and an ambidextrous safety which the left handed shooters can appreciate. Looking a little closer you will see that there is a beveled mag well, full length guide rod and crowned muzzle.

One magazine is included with the gun, which in this case was a 9 round stainless steel unit from Metalform. Metalform magazines are generally regarded as good magazines for 9mm 1911s, but it would be nice if two magazines were included instead of just the one. 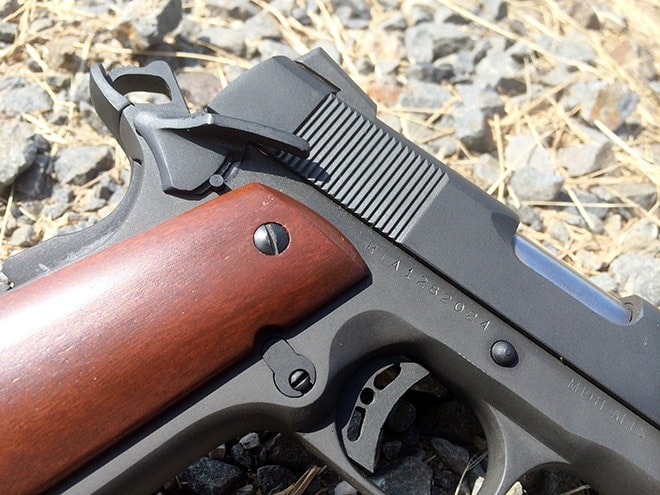 The most loved attribute of a 1911 style handgun for a lot of people is the single action trigger. A well-tuned 1911 trigger is really like no other, with no take up and crisp, clean, relatively light break. I wouldn’t call the RIA Tactical’s trigger “well-tuned”, but it isn’t bad either. Being a series 70 gun the trigger press isn’t cluttered by having to disengage a firing pin safety, but there is still some slack on the front end of the trigger press. While not perfectly clean and crisp, it is good enough for what it is. The trigger is not going to compromise anyone’s ability to shoot the gun well. It certainly did not hurt my ability to post decent group sizes at 25 yards from a standing, unsupported shooting position. Getting hits on an IDPA -0 zone (8″ circle) is easy work from 25 yards. I did not shoot the gun off a rest, because to me that is not a practical application. I am more interested in how well the gun can be shot unaided, versus sitting on a rest.

The trigger doesn’t slow the gun down any either, but the sights do put the brakes on. With the parkerized sights there isn’t enough definition in the sight picture to make acquiring and tracking the sights an easy task at speed. For close range targets that don’t require much sight reference it is acceptable, but for those middle distance targets, or an obscured target at closer range that requires a little extra precision, they start to slow the process down. It is probably only costing a couple tenths of a second here and there, but over the course of a match, that can turn into a few seconds pretty easily. Fortunately, new sights are an easy fix and one that you almost expect on factory guns these days.

Even though there are some fit and finish issues that could be done better, like the sights, in all honesty things like that are easy to fix at the end user level. The real question is how reliable is the gun, especially since it is a 9mm. You would think that if some of the small details aren’t quite perfect that it could be a sign of larger problems looming. 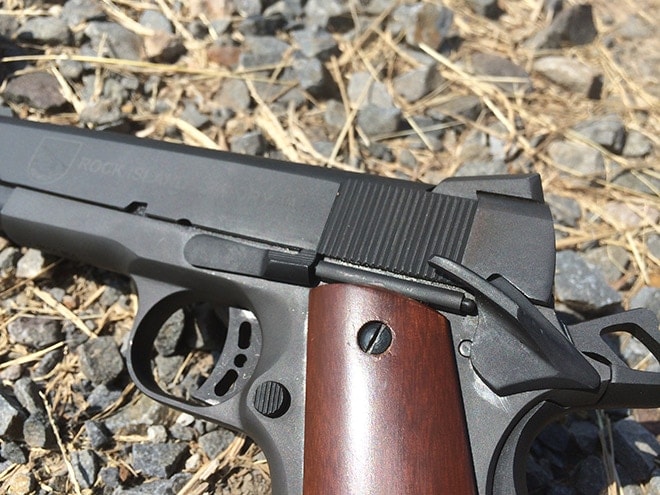 Initially the Rock Island Armory Tactical had consistent failure to eject (aka: stovepipe) malfunctions, at a rate of about 1 every 150 rounds. Upon inspecting the fit of the extractor, it was determined that it was a little on the loose side. In my experience extractors on 9mm 1911s have to run pretty tight. A little tweaking on the extractor to add some tension and the stove pipe issues have not reappeared.

In the past six months, the handgun has had a touch over 1,000 rounds put through it, with a little over half  being Wolf Polyformance ammunition. After all, if I am going to buy and shoot a gun on a budget, why not feed it cheap ammo too. In that same time frame, the gun has malfunctioned once. A round nose-dived into the feed ramp and failed to feed on day two of a class after about 500 rounds from the previous day and no cleaning or lubrication added since before the class. That has been the only malfunction in the past 1,000 rounds. While not a huge accomplishment, it is noteworthy for a 1911 that cost less than $500 and, other than a little tweak to the extractor, is as it was from the factory.

I think what the RIA Tactical 1911 in 9mm has going for it is the price point, the fact that it is a 1911, and the reliability is “good enough” with the understanding that some minor tweaks might have to be made. Value for the dollar, at least in 1911 terms, is good. You get a decent gun with some nice features for a comparatively low price, as long as you compare it to other 1911s. Finding another 1911 with the same set of features in same price range would be a difficult task for most.