Rock Island Armory is best known for their budget oriented 1911s. It is hard to go in any gun store and not see an RIA 1911 for sale. There also happens to be a few other RIA guns out there, including two versions of essentially the same .38 caliber revolver, the M200 which is the 4” barreled “service” model and a 2” version specifically geared towards concealed carry. 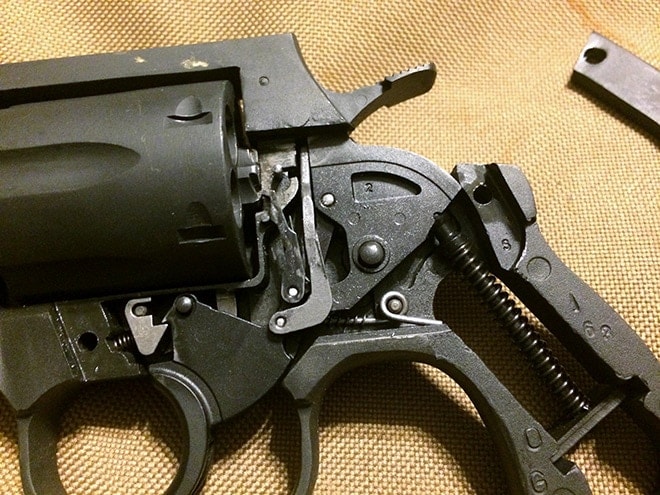 The M200 and its smaller sibling the M206 are both six round revolvers and share functional similarities with Colt’s revolver offerings with the cylinder latch that retracts to the rear to open and internal components that function similar to some of Colt’s later revolver designs with a transfer bar safety and coil main spring. There are rumors that Colt sold the tooling and design to RIA to build these revolvers, but as far as I can tell, those are just rumors.

Rock Island Armory has been in the revolver business for quite some time actually, dating back to the 1970’s with their 100 series of revolvers. In the mid 80’s RIA began producing the 200 series of revolvers, so they have been around for a while, just not very well known in the United States. 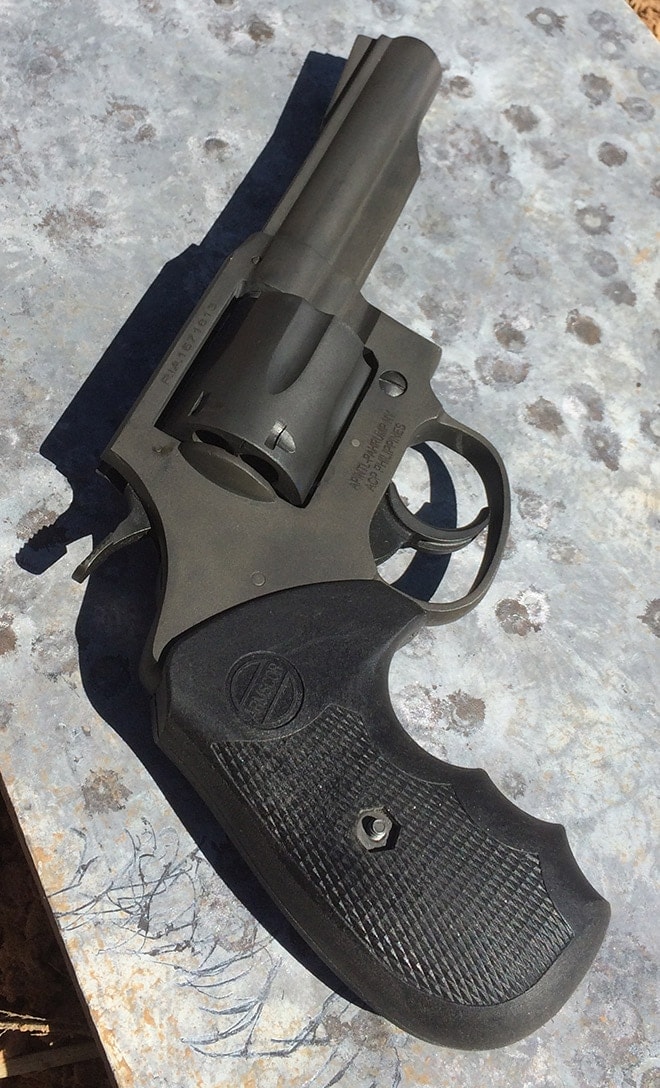 Other than the barrel length and different grips, the M200 and the M206 are the same gun. Not being someone afraid to carry a full size gun, I opted for the M200 with its 4” barrel and larger grips. Like the RIA 1911s, the M200 is also budget priced. It can be snagged for a touch over $200, or if you do your shopping around, it might be possible to find one for just under $200. The price point is evident in the gun as well.

The finish is very similar to most of the RIA 1911’s with the dull, parkerized olive drab sort of color. It’s far from the classic bluing or stainless finishes on most other revolvers, but it seems durable, albeit maybe a little less attractive. There are machining marks and mold lines visible on certain parts of the firearm — nothing that affects function, but certainly affects the form. The sights are very basic, about as basic as I expect from RIA guns, with a fixed front sight and fixed rear sight notch in the top strap. Even though the sights are rudimentary, I did not have as much trouble as I anticipated tracking the sights at speed or under recoil. The grips, or stocks, are made of a hard plastic and functional, my only issue being that the left grip panel impeded the use of a speed loader.

Upon further inspection of the M200, I found it locked up fairly tight and had barely acceptable timing from the factory. The trigger was a little “hitchy” on the return stroke, but that smoothed over time. On two of the chambers the M200 was barely locking up prior to the hammer dropping when using a very slow and deliberate DA trigger press. I felt the timing was not so deficient to cause an unsafe firing condition, but certainly warranted careful observation over time. The firearm came enclosed in a hard plastic box with foam lining, similar to the RIA 1911s, and all the usual manuals and promotional materials. About what one would expect for a $200 revolver. 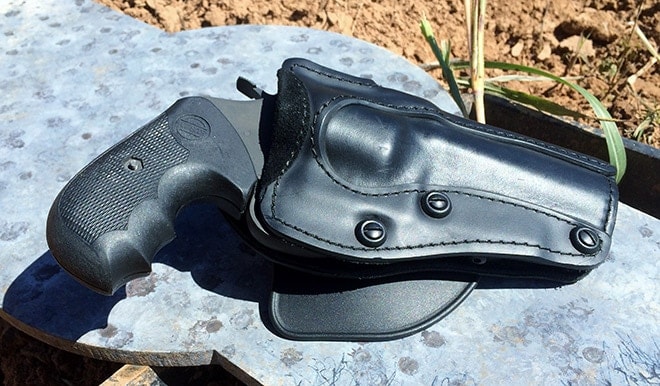 On the range, the RIA M200 performed well enough for what it is. The accuracy was not spectacular, but not horrible either. I could routinely get hits on a large steel popper target at 50 yards, from the holster. On paper, the gun groups better with some loads than others. With Monarch 158gr SJHP it shoots high and to the left. With Magtech 158gr FMJ it shoots closer to point of aim at extended ranges. I also tried 110gr Hornady Critical Defense and it also shot close to point of aim out to 50 yards. Rock Island Armory says that the M200 can hand a “limited” diet of +p .38 Special, but I erred on the side of caution and did not cross that bridge. I am satisfied using non +p loads, but others may not be.

The Monarch 158gr SJHP also had issues with fired cases sticking in the chambers of the cylinder when I would go to eject them. Initially I thought this might be a fault of the revolver, the chambers appeared fairly rough inside, but when I switched to Magtech ammunition the issue resolved itself. Revolvers are not generally thought of as “ammunition sensitive”, but overall I was getting better performance both in terms of accuracy and function during the reload with the Magtech ammunition. 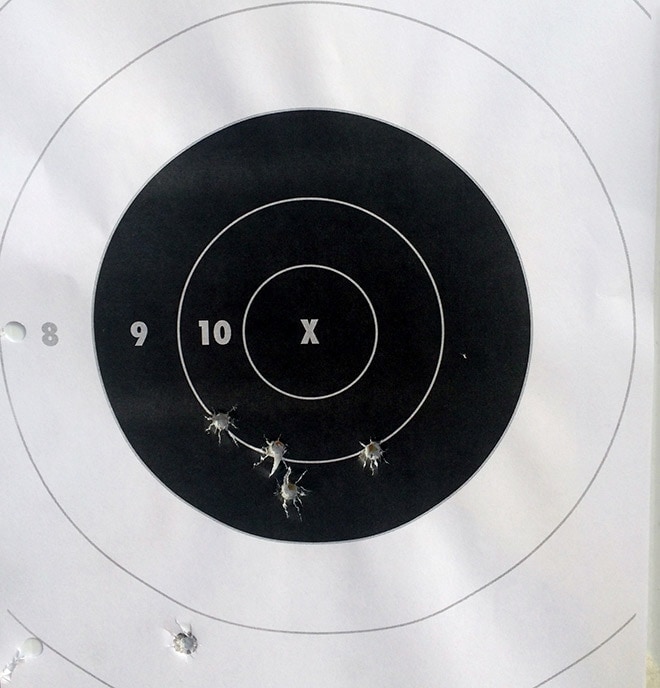 Over the course of testing, I fired a total of 575 rounds through the RIA M200. I periodically checked the status of the timing throughout testing it remained unchanged. I am still curious how long it will take for the timing to degrade enough to require attention. For now, I am satisfied, but I admit to not having very high expectations for a $200 revolver. I did not experience any function or durability issues over the course of the testing period. The trigger settled in overtime and smoothed up considerably, which facilitated a higher level of shooting. The finish did wear in areas where it might be expected. On sharp edges and high points of the firearm that came into contact with the kydex holster I was using. Over the few months that I have had the gun, I did not experience any rust issues, despite living in a humid, southern environment.

So is it worth the $200? First, what do we expect from a $200 gun? For me, it essentially has to shoot relatively straight, not break, and not blow up. The RIA M200 accomplished that, at least so far. This is not a revolver that I would try to win a serious competition with — it is also not a revolver I would recommend as a carry gun unless very carefully vetted with copious amounts of reliable shooting first, in which case you might as well spend some of that ammo budget on a slightly better gun. It is a gun that I think would be good for playing around with a .38 caliber revolvers if you were new to them and wanted a cheap introduction. It is well suited to learn the basic manual of arms for a revolver, and maybe shoot casual, club level competitions. If I had to sum the RIA M200 up in a single phrase it would be, just enough and nothing more. There is enough manufacturing effort put into the gun so that it will work, but don’t expect any extra trimmings.