Acceptance of vital-sized groupings from a rifle is fast becoming a thing of the past as more and more shooters become interested in ultimate accuracy. However, custom, high quality, long range rifles are cost prohibitive to the tune of many thousands of dollars, keeping them out of the price range of the majority of shooters.

Ruger hopes to rekindle these shooters long range aspirations at a very reasonable price point with their Precision Rifle and we took it to the range to see if it delivers. 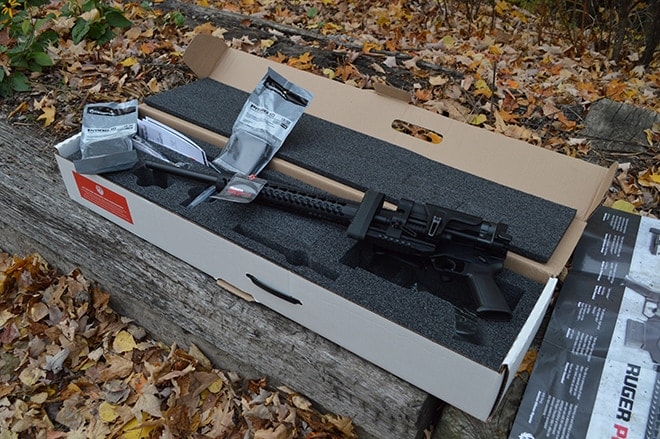 The medium contour barrels feature recessed crowns, 5/8”x24 threading and come capped with a thread protector. Barrels can be replaced using AR tools and a headspace gauge. The 45° safety selector is reversible. The “lower” is machined from aerospace grade aluminum and hard coat anodized while the “upper” is precision CNC machined from 4140 chrome moly steel. 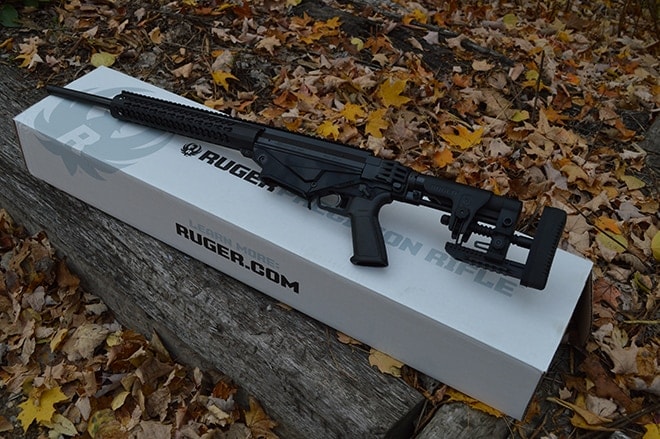 Each rifle comes with two 10-round Magpul PMAGS, weighs between 9.7 and 11 pounds sans optics and accessories depending on caliber, and wears a folding, fully adjustable buttstock. Suggested retail price on the Precision is $1399 for all chamberings, though real world prices are expected to be significantly lower. 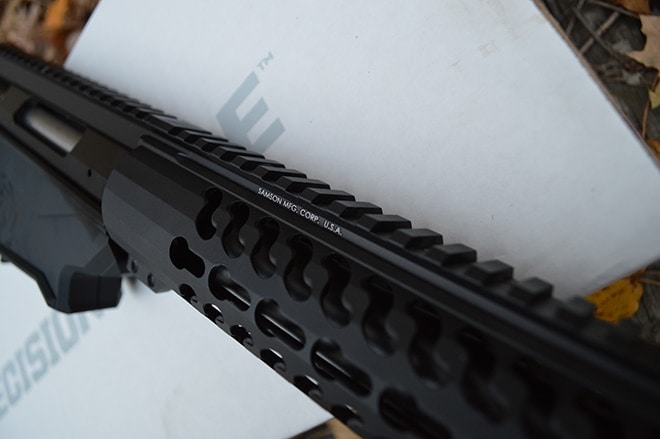 The Precision comes with an attractive and practical freefloat Samson Evolution Keymod handguard. Though any AR handguard can be substituted, it’s hard to imagine why. The 20 MOA picatinny rail secured with four screws offers all the elevation and optics adjustments needed for extreme ranges. Any great customizable rifle needs an adjustable trigger and this one has Ruger’s Marksman trigger, externally adjustable from 2.25 to 5 pounds and quickly set with a wrench cleverly stored in the bolt shroud. 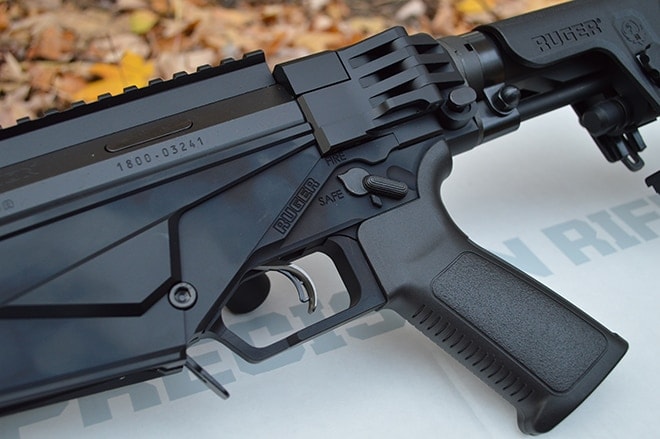 In a move to maximize accuracy, Ruger features what they call an “inline recoil path” meaning that undesirable recoil vibrations travel directly from the rear of the receiver to the buttstock, rather than unevenly around the barrel through a bedding system. One of the more innovative features is the multi-magazine interface, allowing not only the use of included PMAGs, but the majority of both side and rear latching magazines, including M110, SR25, DPMS, Magpul-style, AICS, and even some M-14 magazines. 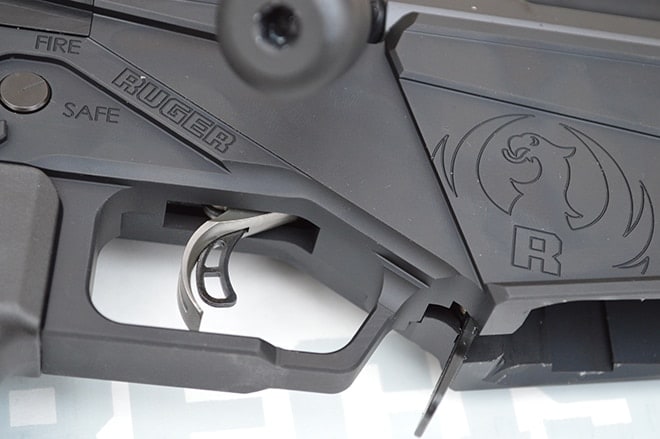 Sometimes the smallest features win the day. For instance, the contoured mag well front makes both an easy forward brace and dresses up the rifle’s looks. Even the branding is classy, with the engraved logo angled on the mag well and clean block lettering at the comb and above the trigger.

One of the most noticeable and our favorite feature is the Precision’s MSR stock, adjustable in about any direction a long range shooter could want. The left-folding stock hinge attaches to an AR style buffer tube, thus naturally accepting any AR stock, though as I mentioned before I don’t know who would want to change it. A bottom picatinny rail for monopods, quality rubber buttpad and QD sling points finish off the MSR stock. Interestingly, Ruger’s design almost turns the buttstock into an extension of the receiver, as the bolt travels rearward into the extension tube. 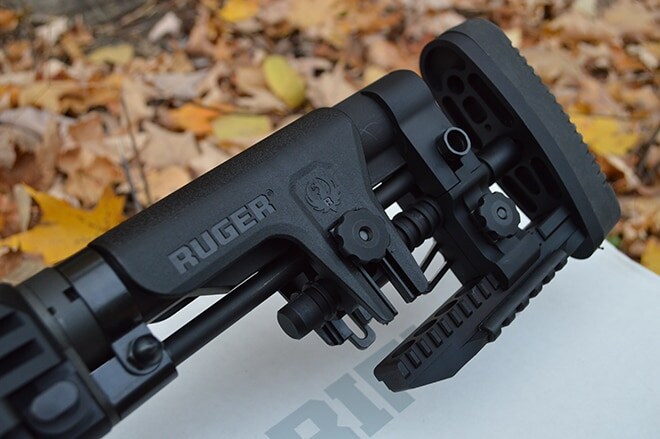 Though many argue the 6.5 Creedmoor is the better long range caliber, we chose a test rifle chambered for the venerable .308. The .308’s cold hammer forged chrome-moly barrel measures 20” putting the folded rifle’s length at 30.5” with overall length between 38.25” and 41.75.” With the fully adjustable butt stock, length of pull can be tweaked from 12” to 15” and the comb height is quickly set over almost an inch of travel to each individual shooter. Though the stocks adjustments are made quickly with flip cam levers, they are neither cheap nor weak, and the stock easily held up to hundreds of rounds of shooting between the adjustments of multiple shooters. Even the cant of the buttpad can be adjusted. 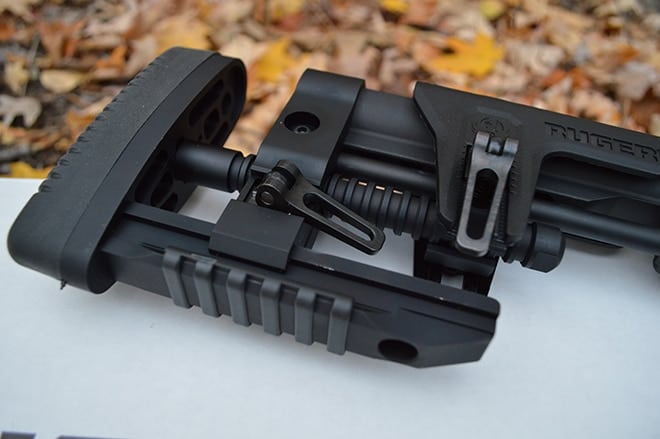 The three-lug bolt with dual locking cams is uber-smooth and reliable. The oversized target bolt handle and 70° throw are easy to manipulate even with gloves, and the bolt action platform makes it the most dependable action on the range. The rifle tears down quickly for a field strip, with the bolt exiting rearward upon folding the stock. (Here is a nice Ruger disassembly video) The bolt itself is simple to disassemble with a little practice, and the trigger wrench is found there as well. Trigger pull is exceptional, with ours breaking clean just under 3# out of the box, leaving plenty of external adjustment range. We all know good triggers are one of the keys to long range success and Ruger provides all the keys you need in the Precision Rifle. 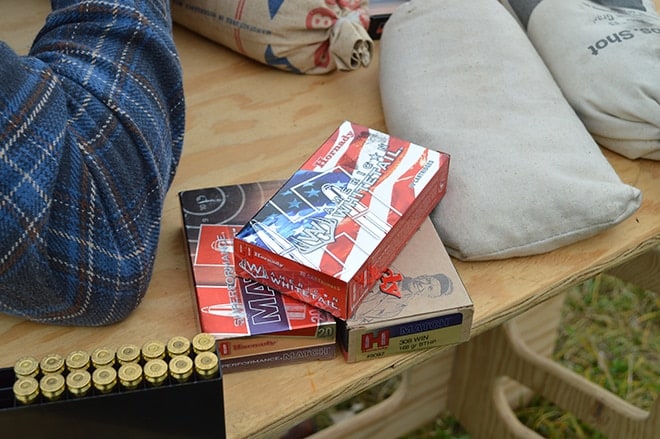 Our accuracy testing was done with Hornady Match 168 gr BTHP, Hornady Superformance Match 168 gr A-Max, and Winchester Match 168 gr BTHP. We also shot for practicality with the hunting specific Winchester Deer Season Extreme Point polymer tip and Hornady American Whitetail Interlock, both in 150 grain. We mounted the new Nikon ProStaff 7 4-16×42 in Nikon mounts. With a 30mm tube, side focus, spring loaded zero-reset turrets and see thru BDC aiming points, this scope excels not only for hunting but worked well at long ranges. While target-only shooters may prefer a fine-crosshair target-specific optic, we’re going for dual purpose with our Precision. 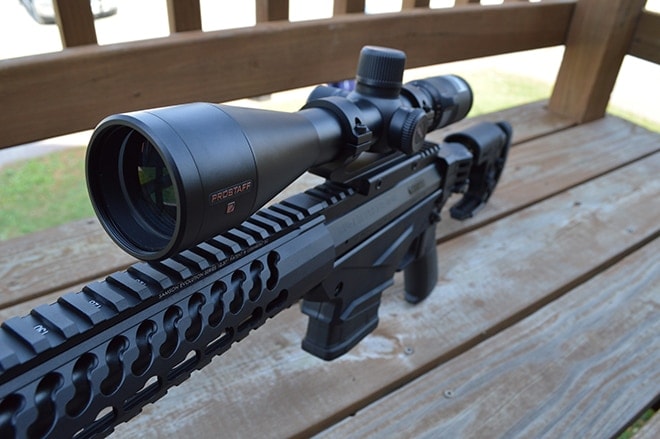 Sight in was a snap with the Nikon 7, and then it was off to the races on the 550 yard range. Accuracy testing was done using both the GripPod front bipod device and sans pod from sandbags. Results were similar and dependant on shooter preference. The .308 with its 1:10” 5R rifling loved the 168 A-Max from Hornady, closely followed by the Match offerings from Winchester We came up with 100 yard 5-shot groups at true sub-moa even with the hunting ammo. With the match ammo, 300 yard average 5-shots groups at 1.95” and 500 yard 5-shots averaging just over 3” in a moderate crosswind on a 45 degree day. The best 500 yard 5-shot group on the day measured just a fraction over 2.25 inches. Care to join the fun? Ruger’s CEO Michael Fifer rang a 16” gong at 1,600 yards with his 6.5 Creedmoor and he challenges Ruger Precision Rifle shooters to knock him off the leader board here. 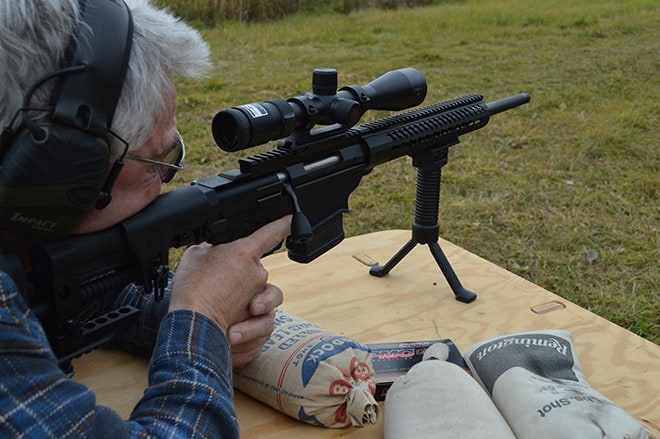 The Ruger Precision is a working person’s long range dream with the Nikon 7 and GripPod. (Photo: Kristin Alberts)

I have no doubt that this rifle is a better shooter than the majority of its trigger pullers can be, author included. This rifle really pounds down the four-inch metal gongs on the range with ease from ranges of 100 yards to 550 yards. We have no doubt its capable reach is well beyond that. The greatest test? Finding a range long enough to really give this rifle a workout. 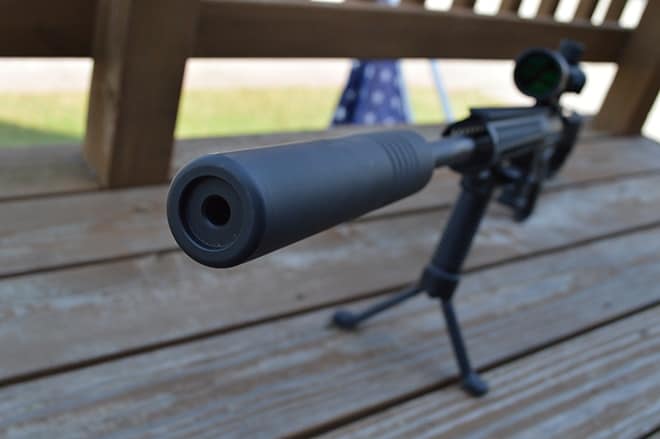 Barrel threaded lends itself to .308 suppressors and other muzzle devices. (Photo: Kristin Alberts)

The threaded barrel quickly allows use of muzzle devices, including compensators and suppressors. We enjoyed adding a Yankee Hill Machine Phantom suppressor. While that sacrifices some ballistic performance, the YHM sure increased the already high baddassery but also quieted the rifle and tamed the already managed recoil. While the Ruger Precision is certainly a rifle built for long range target shooting, it’s not even out of line as a superb hunting gun. With the optic and bipod, our .308 weighed almost 12-pounds. Sure, you wouldn’t tote it along in the woods, but it will have a nice rest in my deer stand this fall and would be right at home targeting 1,000 yard prairie dogs on a bench out west. 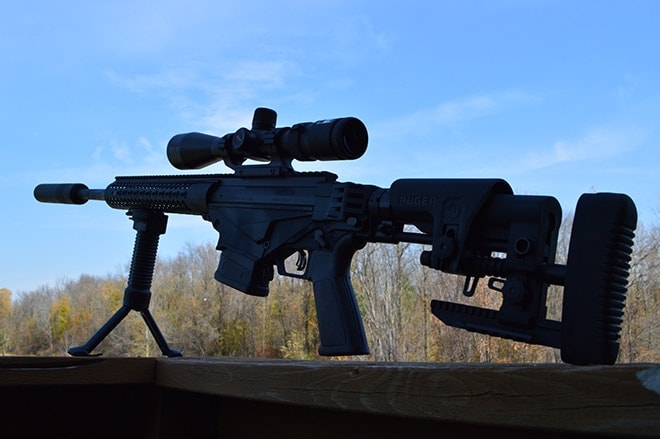 This Ruger is a true long range machine for around $1200. (Photo: Kristin Alberts)

Sometimes things are too good to be true. Think Publisher’s Clearing House, fat free gelato, or the treasure of Oak Island. But an American made, high quality, dependable, customizable long range rifle for around $1,200? This is the real deal. The Ruger Precision lives up to all the promises of accuracy, capability, quality and good looks and would be hard to beat by its competition at twice the price. Be good, boys and girls. Santa came early this year.