The .327 Federal Magnum chambering entered the market with little fanfare more than a decade ago and is just now coming into its own with a full complement of serious guns.  From Henry’s Big Boy line to multiple Ruger revolvers, the stout little round is barking its praises.  Seeing that potential and success, the folks at Sturm, Ruger, Co have added yet another to its lineup — long-awaited, full size GP100.  Has the wait been worth it? Guns.com finds out.

With previous Ruger .327 Fed Mag models in the SP101, LCR, LCRx, and Single Seven, it was only a matter of time until the chambering found the GP100, which is at the top of Ruger’s DA/SA line of revolvers.  Offered in both 4.2- and 6-inch models, the GP100’s show off a hefty stainless steel build with a satin finish. 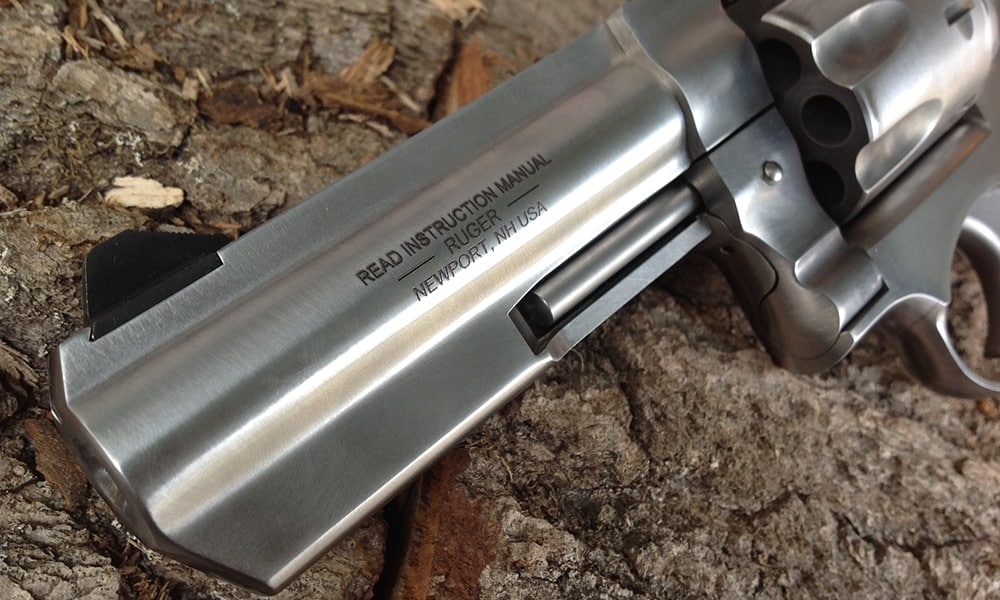 Our test GP100 came with a four inch barrel, though the company also offers a long-awaited six inch version. Both feature a full-length shroud as well. (Photo: Kristin Alberts/Guns.com) 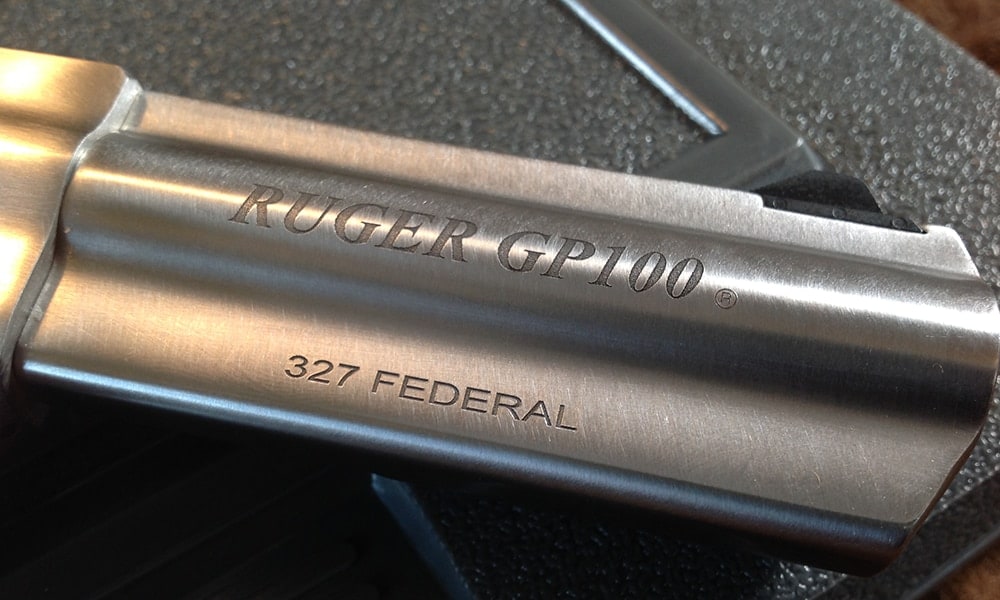 Detail of the GP100’s right-sided barrel engraving, which is clean and modern. (Photo: Kristin Alberts/Guns.com)

The 1/16 inch twist barrel is topped with a ramp front and adjustable rear sights.  Our shorter barreled version measures 9.5 inches overall and weighs 40 ounces empty, even with the full shroud.  A transfer bar safety protects against accidental discharge. The triple-locking cylinder, which engages into the front, rear, and bottom of the frame, assures both cylinder alignment and Ruger’s durability.  The factory Hogue Monogrip wraps the frame while adding serious comfort. The wheelgun comes in Ruger’s gray hard plastic case and is stamped Newport, NH, USA. Regardless of barrel length, the new GP100 in .327 retails for $899 with online retailers already listing the wheelgun for $650. 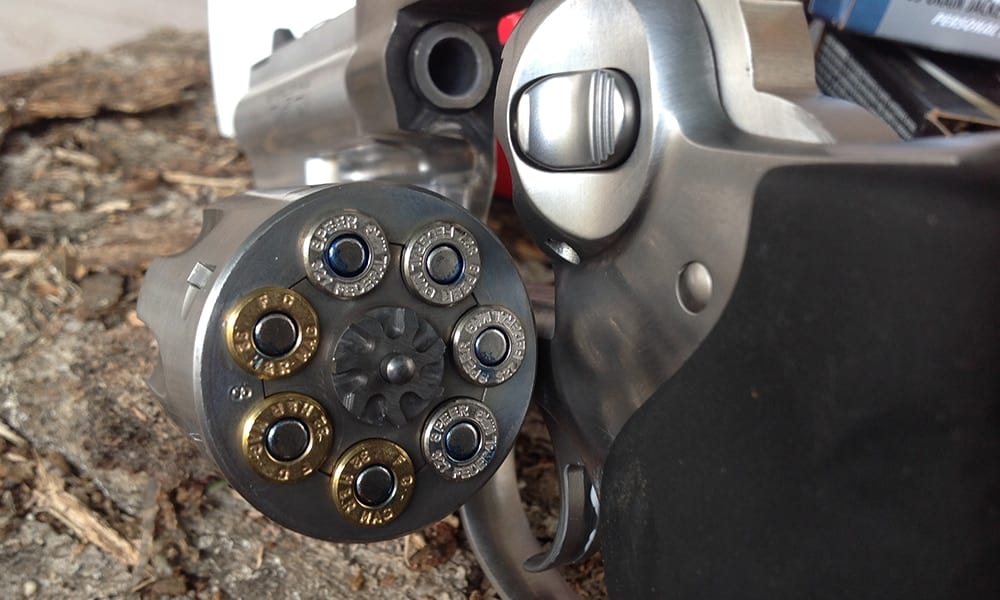 Not only is the .327 Fed Mag a stout defensive round, pushing the .357 Mag’s ballistics with considerably less felt recoil, it is also an option for smaller game hunting, backup protection in the woods, and just an all around enjoyable range master.  Another benefit is capacity — the GP100 holds seven rounds of .327 to only six rounds of .357.  Will one more round make that big of a difference?  Maybe, maybe not.  Yet it never hurts to have more firepower with less recoil.  Just as you can fire .38SPL from the .357, .32 aficionados can also feed the lighter recoiling .32 H&R Magnum.

At just over 3 pounds loaded, the GP100 has more than enough weight to negate the already manageable recoil of the .327, while still maintaining good balance in the hand and on the hip.  The rear sight is easily adjustable for both windage and elevation.  The white outline rear is easy enough to align on target, but could be slightly more prominent for faster acquisition.  Hogue grips coming standard is a boon for accurate shooting.  Coming from a shooter with smaller hands, I can testify that this gun fits me just as well as it does the fellas with larger paws. The GP100 is controllable, a joy to shoot, and a confidence builder not only as a sidearm, but as a knockdown caliber as well. 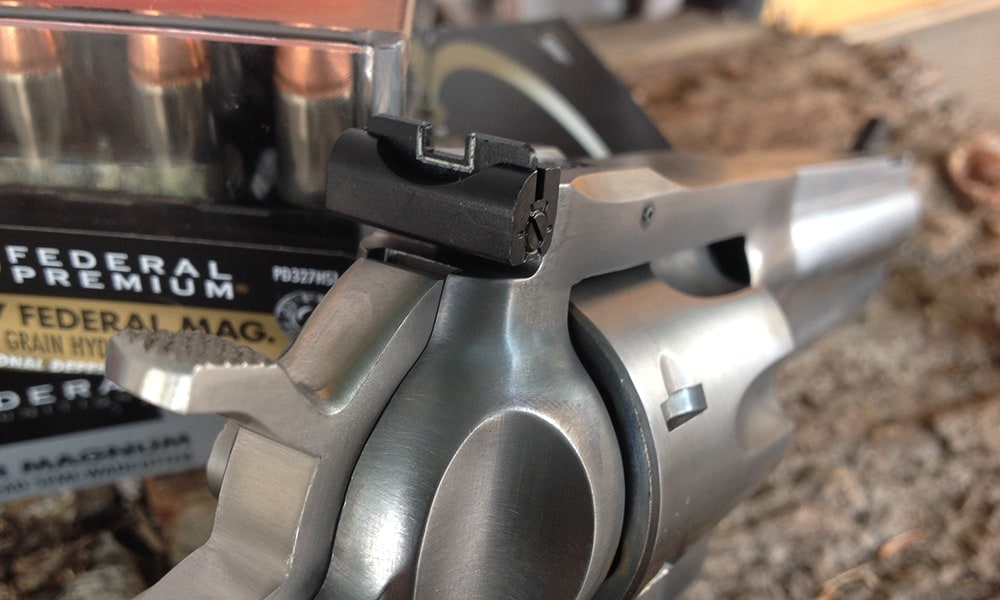 The fully adjustable rear sight on the Ruger GP100 is excellent for accuracy, though we’d like to see a slightly more prominent white outline. (Photo: Kristin Alberts/Guns.com)

Recoil is practically non-existent in a weightier handgun like the GP100.  Fired single action, the trigger broke repeatedly at just over 4-1/2 pounds, crisp and clean which allowed for accurate shooting.  In double action, the pull is obviously extended, but equally smooth in it’s weightiness and easy enough to learn to shoot well quickly.  From the bench, we were shooting repeatable three shot, three-to-three-and-a-half inch groups offhand at 25 yards.  Rapid fire at defense distances was equally as pleasing. 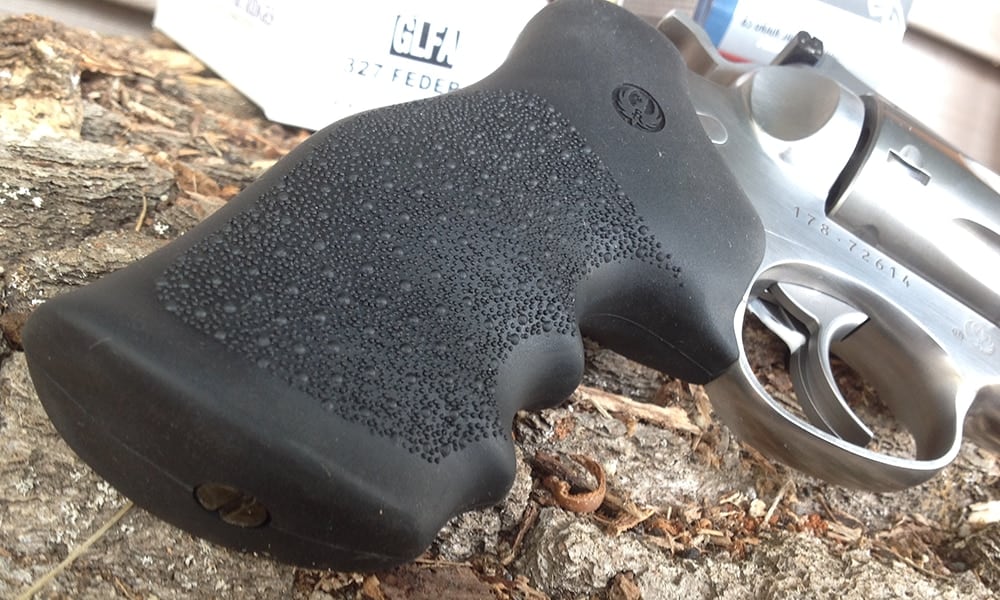 Not only does the GP100 look good, but is a pleasure to shoot, due in large part to the factory Hogue Overmolded grips which fit smaller hands just as well as they do larger paws. (Photo: Kristin Alberts/Guns.com)

We fired a mix of factory premium ammunition, which before you gnash your teeth, is in fact readily available on store shelves:  American Eagle 85 and 100 grain JSP’s, Speer Gold Dot 100grn JHP, Federal Premium 85grn Hydra Shok JHP, and Great Lakes 100 grn RNFP.  There’s much more bark than bite in terms of noise over recoil.  When shooting the .32 H&R in Federal Premium Personal Defense in 85grn JHP and 95grn SWC, there’s certainly less velocity, but also less report, while still maintaining excellent accuracy and nearly identical point of impact.  Caliber versatility is as interesting in the GP100 in .327/.32H&R Magnum as it is in the .357/.38 Special.  Regardless of your chambering favor, though, the fact remains that the Ruger GP100 just plain fits and is not just attractive, but capable.

With very similar outward appearances in the 4-inch barreled .327 Federal revolver market, we’d be remiss not to consider whether the GP is worth more money than it’s older, albeit smaller brother, the SP.  There is only one close competitor, Ruger’s own SP101 which is considerably lighter at 29.5 ounces, and only a six-round capacity, the GP100 ultimately throws down the trump card.  A larger, rugged frame with room for an additional round in the cylinder, upgraded grips, and all done in an attractive, well-balanced package for just over a hundred dollars more.  The SP101 wears a fiber optic front that some will prefer over the GP100’s ramp front, but not I.  The biggest benefit to the SP101 is as a crossover carry wheelgun.  Its lighter weight and smaller frame and grips make it a bit more concealable but not quite as much fun on the range as the GP100.  They’re both fine guns that more than do justice to the .327 Fed Mag chambering, but after getting my hands on both, the GP100 was an easy choice for my purposes as a woods sidearm, plinker, and backup carry tool. 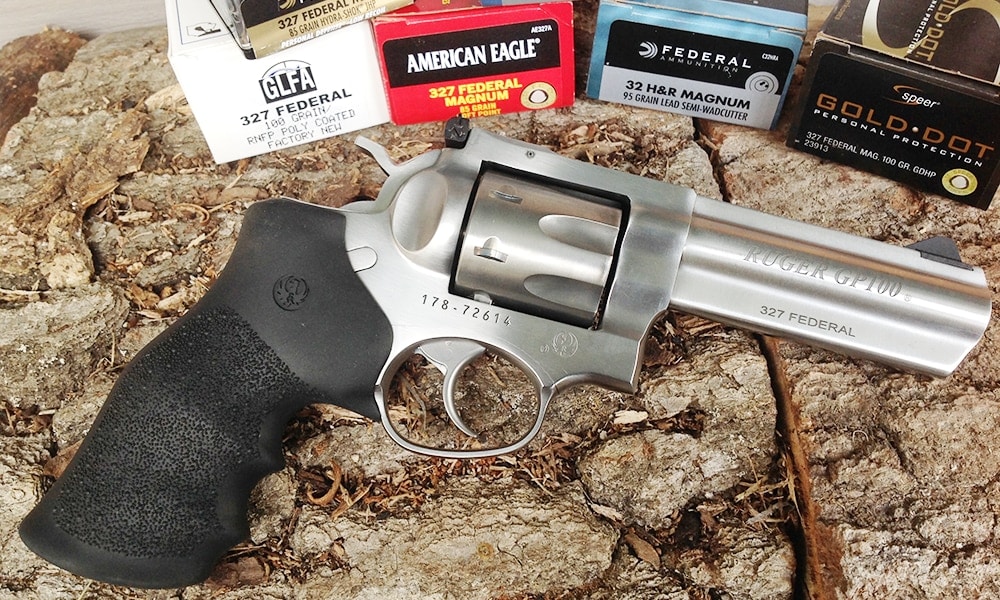 The new Ruger GP100 in .327 Federal Magnum is the first true full-frame revolver in the caliber, and at the end of the day, it has been a long-awaited win.  While the LCR family covers the carry market with some rollover into the SP101, and the Single Sevens are capable single action plinksters and hunters, the GP100 is Ruger’s ace in the hole.  In our 4 inch barreled model, not only could it moonlight as a carry gun, but excels as a woodsman’s sidearm, a small-game and varmint slayer, and darn enjoyable all-around shooter.