Note: Models manufactured before June 1, 2017 may be subjected to recall. Check with manufacturer.

Ruger, long the king of all things rimfire, has upped their game once more. The beloved Mark series of semi-auto long rifle pistols, around for many decades, had one flaw: it was a pain to dis- and reassemble.  Times have changed and the new-for-2017 Mark IV, with its one-button takedown, may just be the perfect rimfire pistol.

What is the New Mark IV?

It’s hard to imagine any shooter who has never heard-of or fired one of the Ruger semi-auto rimfire pistols, be it the original Standard or Marks I through III.  Those early guns shot with accuracy and reliability, fit well in the hand, and lasted for generations; but they took either considerable practice or star-crossed luck for full disassembly and successful re-assembly.  The Mark IV promises to make a good thing great by addressing this shortcoming head-on. 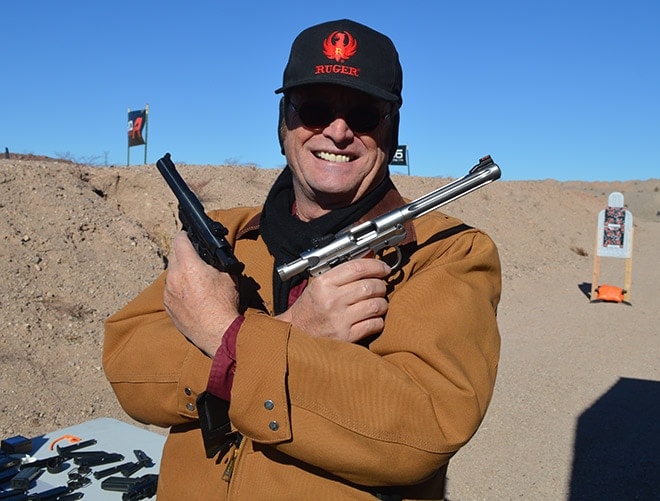 We had the pleasure of meeting the mastermind behind the new semi-automatic Mark IV, designer Dave Anderson, who is credited with evolving the simple, why-didn’t-they-think-of-that-sooner one button takedown system. A recessed button at the rear of the frame allows the upper receiver to tip up and off the grip frame without the use of any tools.  It’s so simple, in fact, it can even be done one-handed.  No more prying out the mag either; instead, the new design incorporates a left-side push-button release that springs the mag free from the gun with authority. 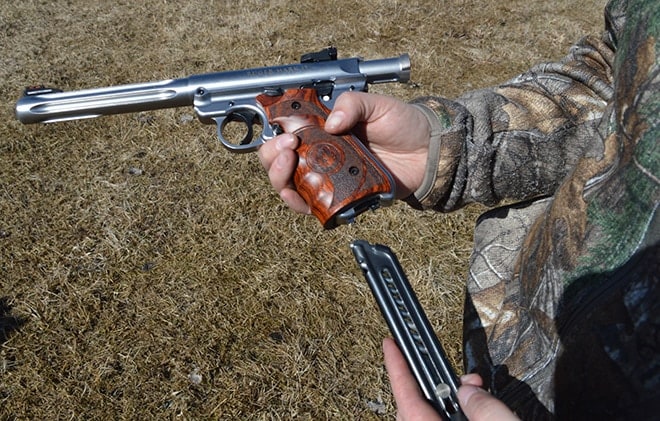 The drop free mag “shoots” out from the magwell. Be prepared to catch it—beats having to pull the mag free on the older models. (Photo: Kristin Alberts)

Love it or hate it, the new series has a magazine disconnect safety, meaning once the mag drops free, the pistol cannot be fired.  In a nice move, the ambidextrous manual safety locks the sear and can be converted to left-side only with an included washer.  A newly contoured ejection port and easier-to-grasp bolt ears improve reliable operation. Ruger also claims that the internal cylindrical bolt construction of the Mark pistols ensures permanent sight to barrel alignment and greater accuracy than conventional moving slide designs. 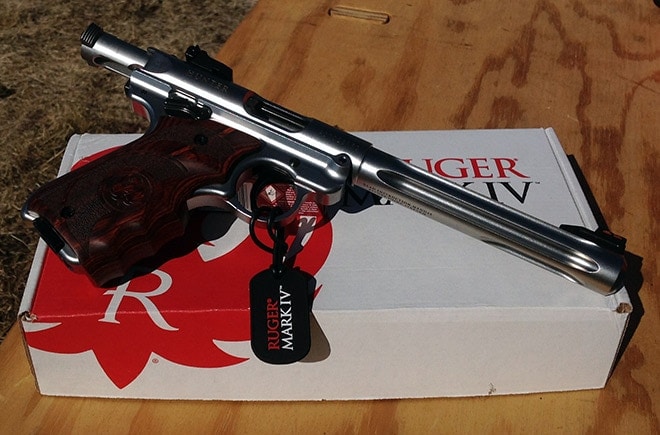 The Mark IV comes packed in a white Ruger-branded cardboard box with two 10-round mags, a gun lock, and paperwork.  The best part?  The new Mark IV is made in the USA in Prescott, Arizona. 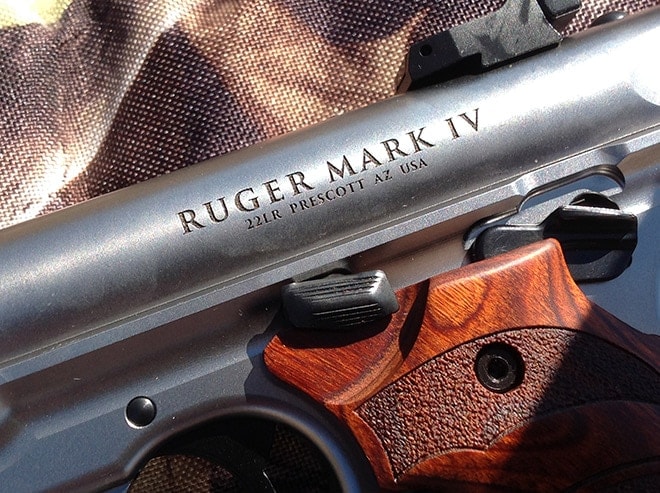 To further improve upon the line of desirable Mark IVs, Ruger did not just release one standard model.  No sirree.  In fact, they modernized the line with four model offerings, suitable for plinkers to hardcore target shooters to hunters: Target, Hunter, Lite, and Competition. 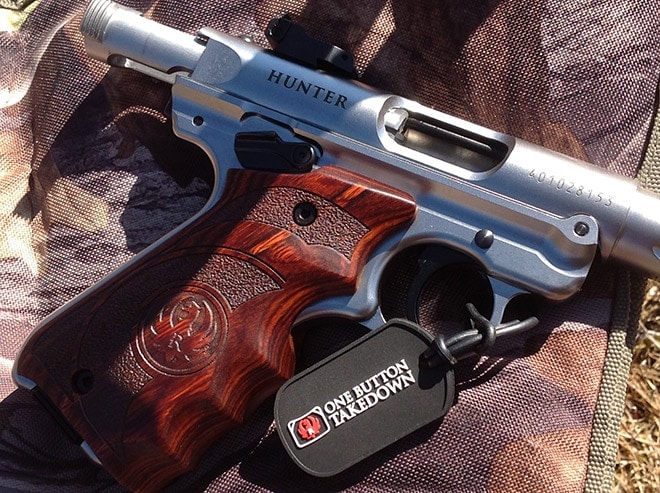 The Target most resembles the old standard, but with a heavier barrel and an MSRP of $529 for blued and $689 for stainless.  Two models of the Hunter are now on the market, with the sole difference being the grip style and running $769 to $799. The Lite is a 22/45 Mark IV that is both ultra light, threaded, with suppressor-ready sights, and a picatinny rail for optics mounting. MSRP on the Lite is $559. Lastly, the Competition is a slab-sided signature series edition of 1,000 bearing the engraved autograph of William B Ruger and carrying a collector price tag of $1065 at Davidson’s Gallery of Guns.  There’s also a full complement of accessories, from mags and loaders to Ruger-branded holsters, scope bases, and alternate types of sights. 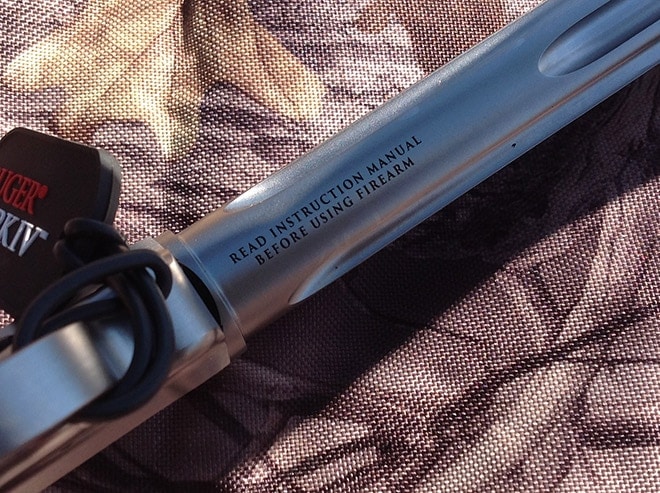 The only safety messaging on the firearm. (Photo: Kristin Alberts)

Our test pistol is the Mark IV Hunter with its attractive finger groove grips.  The accurate sighting system on the Hunter models include not only an adjustable rear sight and fiber optic front, but it is also drilled and tapped for either Weaver or Picatinny rails.  The one-piece, precision CNC machined grip frame wears wood laminate which wraps around the front. 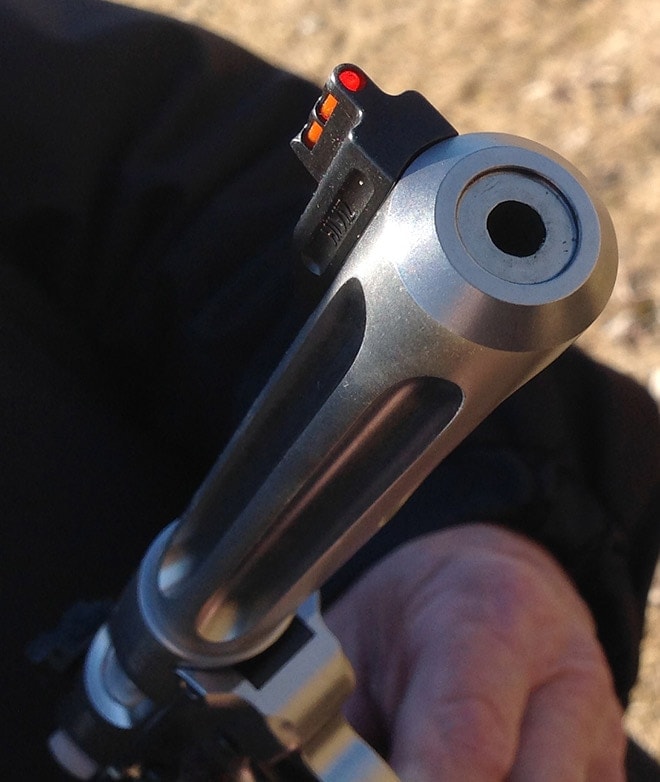 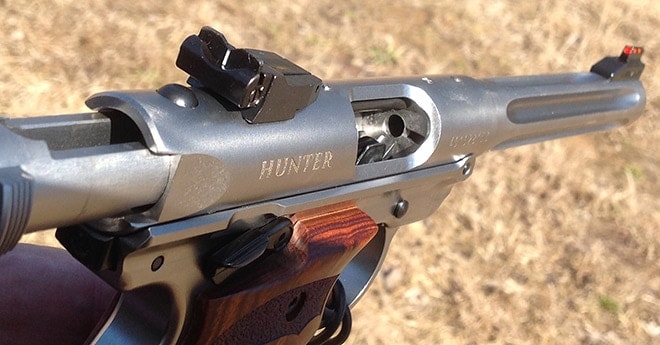 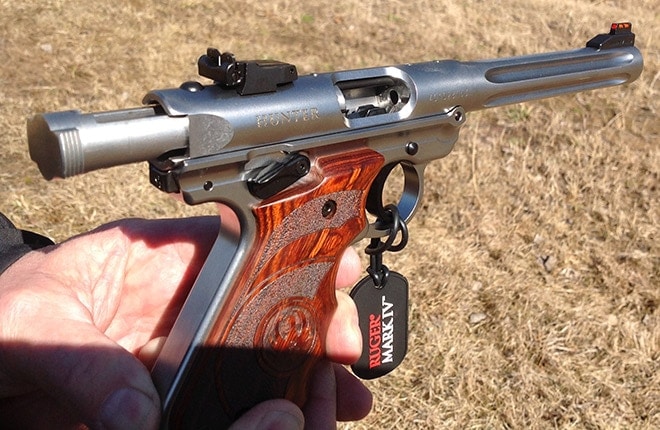 The satin stainless construction of the gun sets it apart in looks, while the 6.88 inch fluted stainless bull barrel adds to both appearance, accuracy, and performance. The right-hand twist rate of 1:16 is ideal for a pistol this size. With an overall length just over 11 inches and a height of 5.5 inches, the Hunter weighs in at 44.2 ounces making it ideally weighted for accuracy potential and balance, while remaining light enough for all-day carry in the woods. 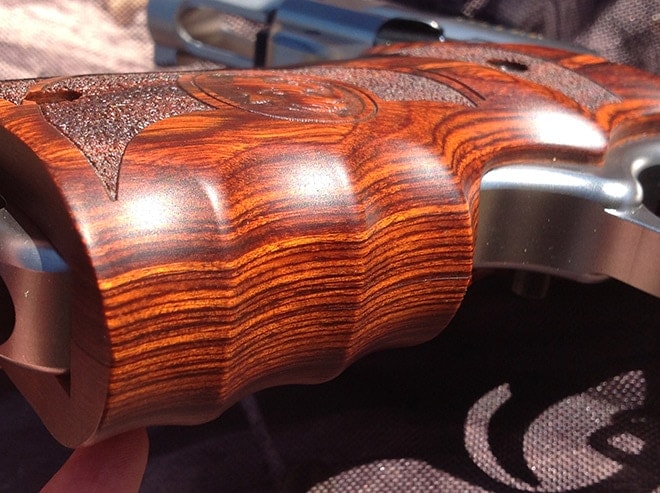 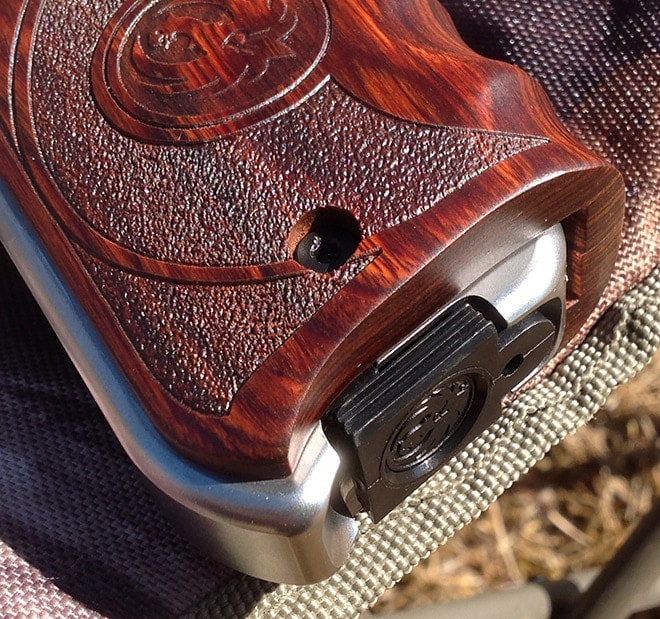 Magwell detail with Ruger-branded mag. A nice touch on the Mark IV is the drop-free mag release. No more prying on the mag base. (Photo: Kristin Alberts) 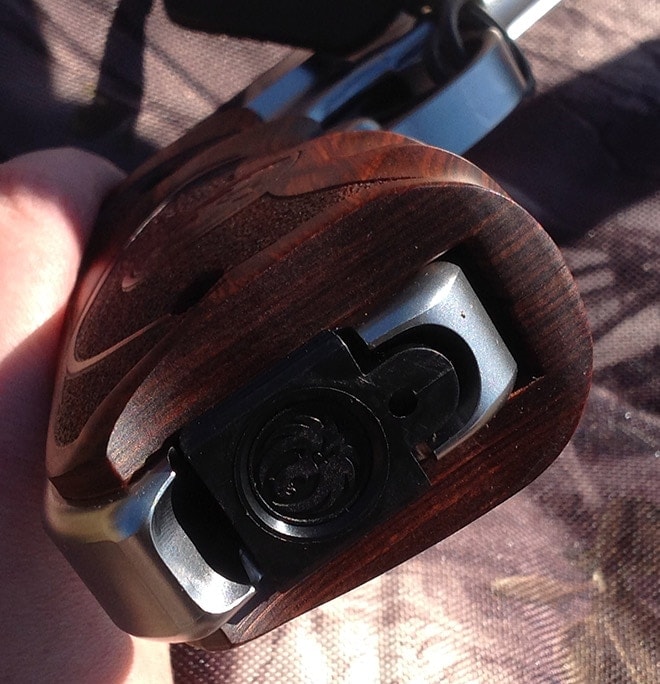 Wraparound grips fit close, but no not impeded access to the mag. (Photo: Kristin Alberts)

We shot a variety of ammo, including Federal Match Hunter, Winchester bulk, and Browning BPR hunting rounds.  The Hunter made quick work of every round, with zero malfunctions.  In the hand, the Hunter balances very well with its complement of beefy finger groove grips and fluted heavy barrel.  Accuracy potential is aided significantly by the much improved irons.  The dovetail fully adjustable rear sight wears a white center line for quick and easy acquisition and alignment of the front HIVIZ red fiber optic.  Partner the Mark IV Hunter with Federal’s new-for-2017 Hunter Match 40gr HP ammunition and you have a rimfire combination that can’t be beat in the woods or fields. 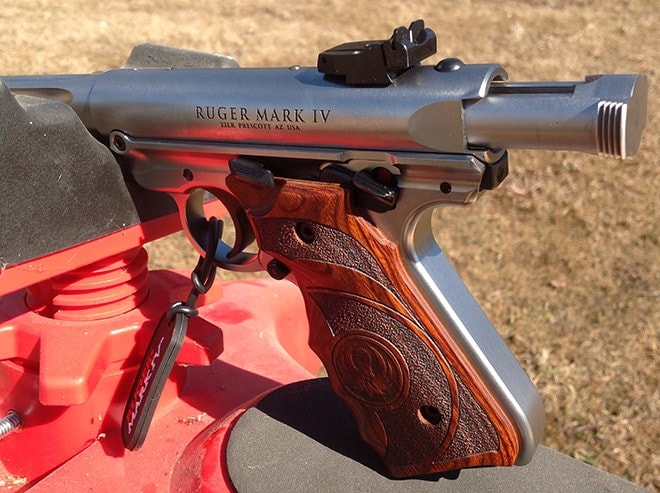 The black button at the rear of the frame provides the simplest takedown in the industry. (Photo: Kristin Alberts)

Best of all, the one-button takedown makes quick field stripping a snap, or a full bench tear down and chamber to muzzle scrub.  There’s no excuse to neglect maintenance on the Mark IV, meaning no reason not to take it afield every chance you get. 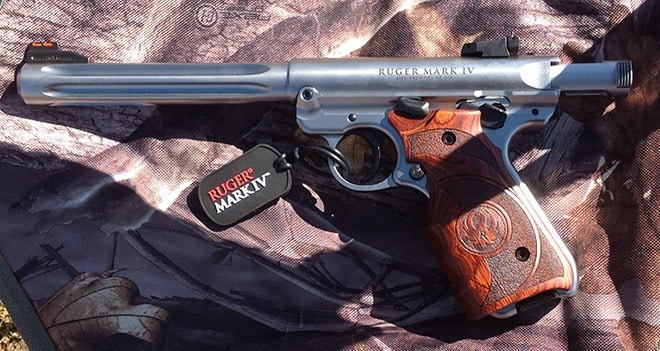 The Ruger Mark IV Hunter has an MSRP of $769 to $799 depending on the grip. (Photo: Kristin Alberts)

After much ado and many decades, it turns out you can teach an old dog new tricks.  The new Mark IV breaks down so much easier, along with other improvements and models that make it hard to resist, even for those who already own one of Ruger’s predecessors.  While the initial Standard pistol was passed down from grandparents to grandchildren today — this writer included — so will the new Mark IV, built with the same quality and even greater features, live on for generations to come.