Savage Arms has always found a way to wow the market with affordable, myriad options in rifles. What’s new for 2018 is actually two-fold: 16 new additions to the 110 lineup, including the Predator model, and second, and most special for the company, the AccuFit stock system. Guns.com finds out if the setup lives up to its potential.

Though there were plenty of new offerings not only from Savage, but also from parent company Vista Outdoor holdings, it was the AccuFit stock system that drew the most attention during Industry Day on the Range during this year’s SHOT Show. The AccuFit stock is actually a series of interchangeable inserts that allow the shooter to customize both length of pull and comb height.  The result is a gun that is essentially custom fit to that user.

Our 110 Predator came with five comb adapters and four spacers for LOP adjustment. Swapping is done simply by removing the rubber buttpad. The comb adjusters snap into place, while the LOP spacers attach using different length provided screws. The AccuFit system is already available on at least ten models, and we fully expect it to make its way to many more.

As if AccuFit is not enough of an upgrade, many of Savage’s new rifles — our Predator included — make use of what the company calls AccuStock. That aluminum rail system integrated into the stock replaces custom stock bedding to provide three-dimensional support for the action and barrel, theoretically improving accuracy.

The Predator is a hunter through and through, built for long range accuracy. What sets the 110 Predator apart from other models is the Realtree Max-1 camouflage, the heavy contour 22-inch fluted barrel, and the suppressor ready threaded muzzle. An oversized bolt is reminiscent of what one would find on target rifles and allows for rapid cycling in the field.  The adjustable Accutrigger is so nice that it has quickly become a must on Savage rifles.

At 8.69 pounds sans optic or ammo, the Predator model is one most at home on the bench or the sticks, which is exactly where you’d find most predator hunter set up.  The detachable steel box magazine holds four rounds, in our case, of .223. The matte black finish on the carbon steel receiver as well as the barrel make an ideal, unassuming hunting companion where concealment is the name of the game.  In a thoughtful move, the 110 comes with two-piece Weaver-style bases for optics mounting. 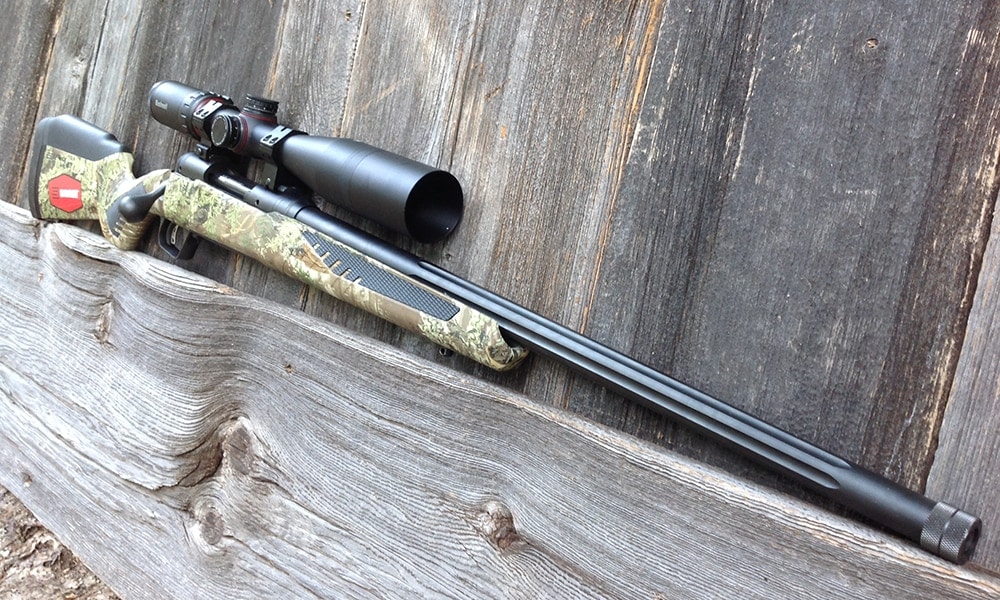 The 110 Predator is all business in the field, with its heavy fluted barrel that is threaded for suppressors or other muzzle devices. (Photo: Kristin Alberts/Guns.com) 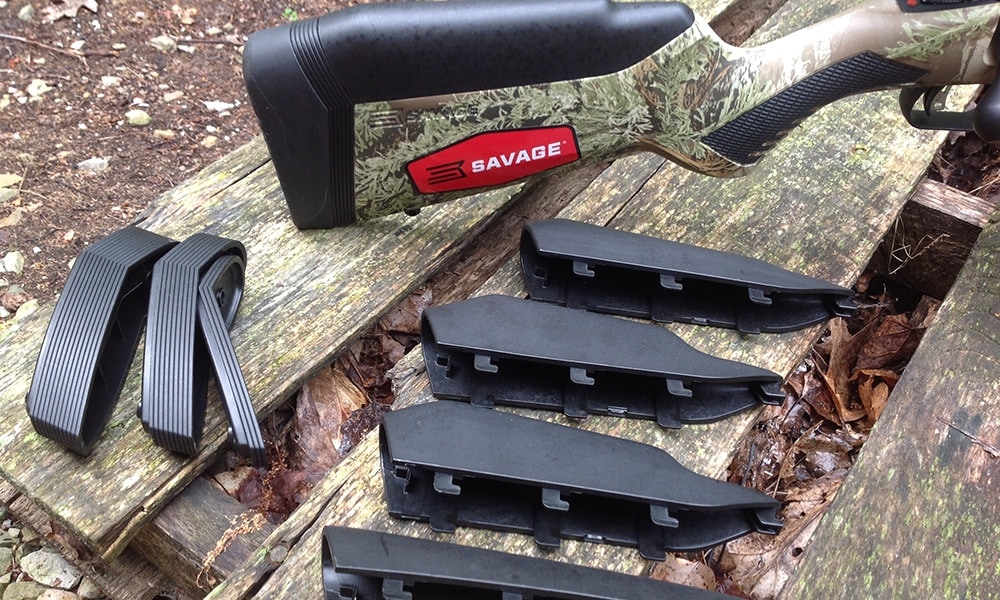 Savage advertises “the 110 Predator provides the fit, function and accuracy of a custom rifle — right out of the box.” With an MSRP of $899, and real-world prices lower still, only a good amount of range and field time can prove that claim.

For accuracy and testing purposes, we were able to get our hands on one of partner-company Bushnell’s new Nitro scopes. Part of a soon-to-launch family of three lines: Forge, Prime, and Nitro, our test optic has the power and reticle to match predator hunting situations. Our Nitro 4-12×44 is a first focal plane (FFP) optic with a 30mm tube and Deploy MIL reticle.  We mounted the scope in Weaver’s high Skeleton rings and quickly had the rifle dialed in for business.

Though the 110 Predator comes in a great selection of calibers: .204 Ruger, .223 Rem, .22-250 Rem, .243 Win, 6.5 Creedmoor, and .260 Rem, our test gun came in the capable .223. With a fine mix of ammo, we headed to the range for sight in in advance of a prairie dog hunting adventure. We zeroed the reticle at 100 yards, and the Deploy reticle design allowed us to map out our hold from there on out to over 300 yards, meaning with a rangefinder, we’ll be ready for varmints out West.

The AccuFit stock system of interchangeable inserts is beneficial not only for youth or smaller-framed shooters who may grow with the gun, but more importantly, for any shooter seeking a custom fit. When wearing bulky hunting clothing, perhaps it’s nice to remove a LOP spacer. Or when using high rings for optic mountings, this is easy enough to add a comb riser to get the eye in line with the scope. That worked perfectly, as the high Weaver skeleton rings we opted to use to accommodate the scope would have been uncomfortably high without the elevated comb piece in place.

In addition to the AccuFit inserts, our 110 Predator also makes use of Savage’s AccuStock. That means the rifle includes a full aluminum rail that runs the length of the polymer stock and essentially cradles the action, attaching at three different points and providing three-dimensional support. This replaces the single aluminum bedding block used in many other composite stocked rifles, which have a single point of attachment and downward pressure. 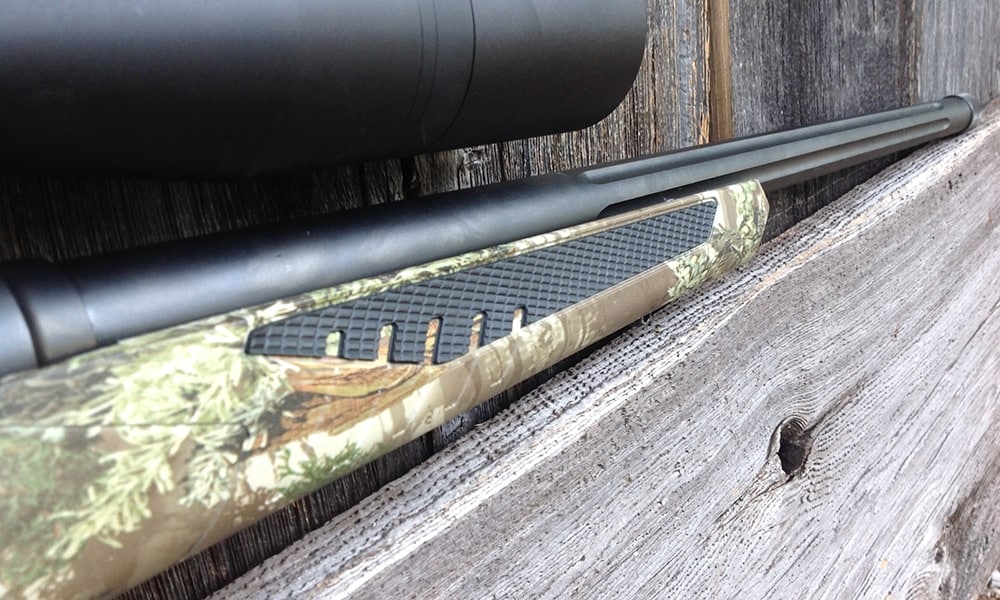 The AccuFit comb inserts snap into place with three tabs on either side and one forward, all locked in with the chosen LOP spacer and screws through the soft rubber buttpad. (Photo: Kristin Alberts/Guns.com) 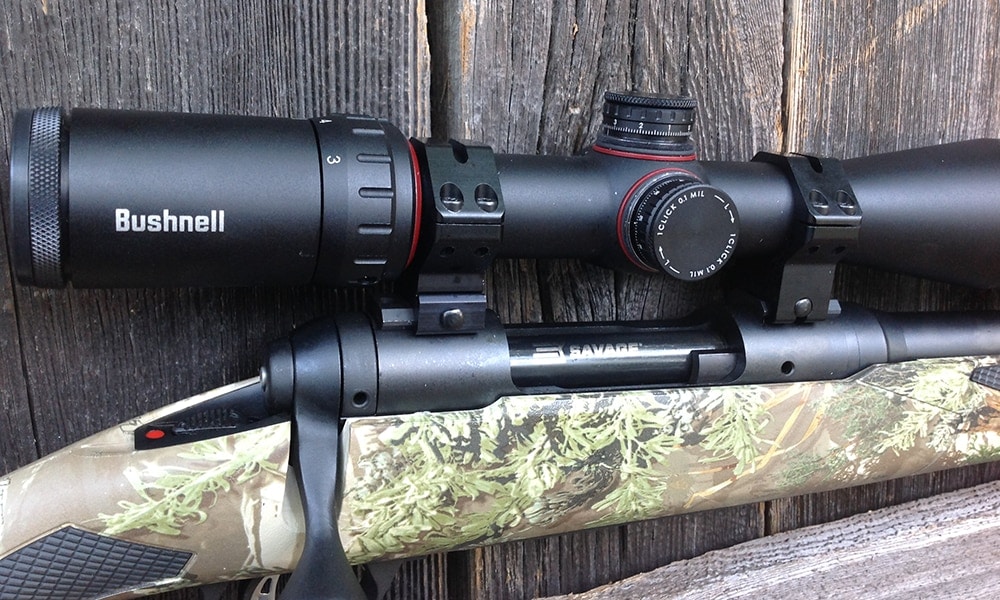 As we’ve come to expect, the Accutrigger performed admirably, breaking out of the box at just under 3.5 pounds on our Lyman Digital pull gauge. The soft-grip inserts are excellent for additional purchase in adverse conditions, while the Realtree Max-1 camouflage on a gun like the Predator excels in those western varmint terrains.  Loaded up with a scope and ammo, our setup was pushing 10 pounds, which is weighty for carrying all day, but excels on the bench or sticks while still being maneuverable enough to get out on the move.

We fired a variety of .223 hunting ammo, including Hornady American Gunner 55grn HP, Hornady Varmint Express 55grn VMax, Sig Sauer 40grn Varmint & Predator, Browning BXV 50grn, and Nosler Ballistic Tip 60grn.  Accuracy from the bench was all we expected, with the best three-shot 100 yard group at an impressive 0.49 inches with Hornady Varmint Express and repeatable groups well under MOA with each brand of ammunition.

In fact, the majority of our 200-yard groups held at or under MOA. Though we worked without a suppressor this time around, having the threaded and capped barrel keeps those options open for both muted hunting and range work. The oversized bolt handle is easy to actuate with plenty of clearance with optics. The only thing we would seek in the future is a higher capacity magazine for those prairie dog hunts or higher volume shoots, though the well-built steel magazine is a nice touch on a quality rifle.

Living Up to the Hype

The name of the game on the new line of Savage is “Accu”, with the AccuFit adjustment system, AccuStock aluminum bedding rail, and the adjustable Accutrigger, the end result is above average accuracy and performance.  Savage’s new AccuFit stock lives up to its hype, as we found ourselves making use of the both comb and LOP adjustments. With accuracy, looks, function, and features, not only was the Savage 110 Predator a success on the range, but good enough to make the cut as one of my two rifles for a varmint hunt out west in the near future.  If that’s not a ringing endorsement, I don’t know what is.