At SHOT Show 2017, Savage displayed a number of new rifles. Among them were several new B Series (as in bolt action) rimfires. Guns.com was provided a B17 FV SR, chambered in 17 HMR, for review.

Savage used modern materials and classic lines to create the stock. Its slightly textured, black synthetic construction is sculpted with grip-friendly grooves in the right places. The raised, non-adjustable comb helps insure a secure cheek weld. In a nod to tradition, an indent circling the butt gives the appearance that it has a shoulder pad. The receiver and barrel are blued. 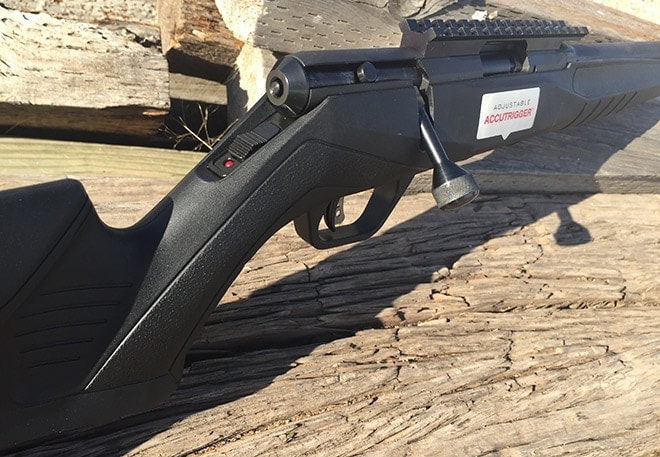 A rail and threaded barrel define the FV SR model of the B17 series. (Photo: Team HB)

There are several models of the B17 new in the company’s offerings for 2017. The FV SR includes a picatinny rail and threaded barrel. Wood and stainless finishes are also available, as is a rail-less, non-threaded version.

The B17 weighs in at six pounds. It has a 16.25-inch barrel and an overall length of 35.25 inches. The barrel has a 1-in-9 twist. Included with the rifle is one 10 round rotary magazine, which feels and operates very much like a standard Ruger 10/22 magazine. 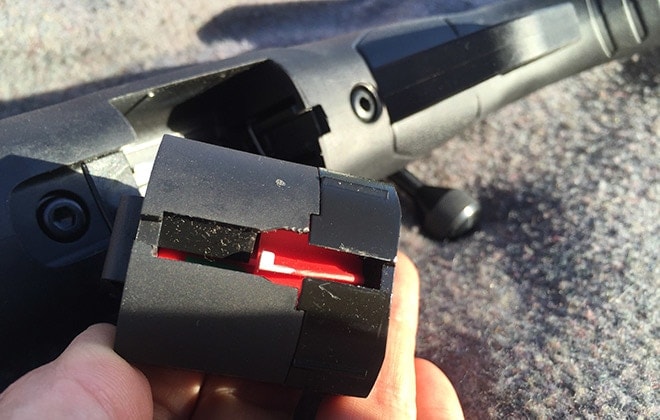 No complaints about the 10-round rotary magazine. Extras can be obtained for around $20. (Photo: Team HB)

Savage has established a good track record of including high-end features on reasonably priced rifles, and this one is no exception. In addition to the threaded barrel, it has the company’s branded Acu-Trigger, a user-adjustable single stage model with a safety block. This being the third Savage rifle I’ve reviewed that features the Acu-Trigger, I’m not shy about saying its quality is on par with custom triggers that cost almost as much as this rifle itself. 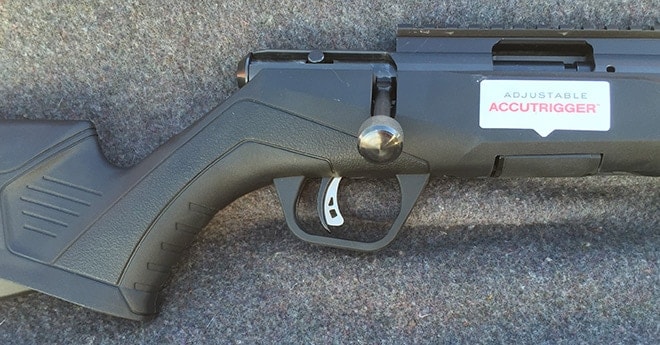 The Acu-Trigger, a feature our review team has grown to love. (Photo: Team HB)

There are sling studs at each end of the stock, the forward one of which we replaced with a little bipod by Blackhawk, called the Sportster. At $66.45 for the 6 to 9 inch model, this bipod performed as well as any of the big ones. Were I to buy a Sportster for my own use, I’d black out the shiny brass washer that’s visible from the front and potentially scary to game or varmints.

What’s lacking on this rifle is iron sights. Perhaps in keeping with industry predictions of an explosion of optical device options, Savage offers this rifle with a rail, or drilled and tapped for scope rings. This is my only real complaint — wish it had both.

The Savage logo is tastefully stamped on the grip cap. (Photo: Team HB)

Bushnell, a partner company under the Vista Outdoor umbrella, along with Savage and Blackhawk ponied up the fanciest scope I’ve ever seen on a rimfire, more than compensating for the lack of irons. The 3-12x 40mm optic turned this little rifle into something capable of reaching out and touching quarry from quite a distance. A generous field of view, still 10 feet at 100 yards on full power, make this scope/rifle combo a real threat to the local coyote population.

Instead of coyotes, we were satisfied to plink the 6 inch, and then the 3 inch steel gongs at the local range from 100 yards. Once the scope was dialed in, even the 3 inch gong was an easy mark. 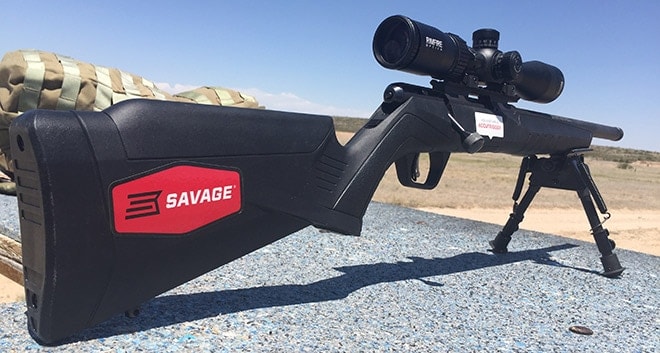 Shooting the B17 with a high-quality optic proved to be fun and rewarding. It’s extremely accurate. (Photo: Team HB)

A wrinkle in the plan occurred when mounting the scope. Factory instructions recommend medium height rings, a set of which were supplied by Weaver. A small protrusion on the bottom of the scope prevented it from clearing the rail by a very small distance, approximately 1/32 inch, nevertheless it did require high rings for secure mounting. This is a caveat to note for anyone seeking to recreate this setup.

A Sportster bipod, by Blackhawk, is a great addition to this rifle for field and bench use. (Photo: Team HB)

Consistently hitting 3 inch targets at 100 yards with a rimfire is made easy not only by a good optic, but also quality ammunition. In this test, we ran three different loads through the rifle, first at 25 and then 50 yards for a final accuracy test. As this year’s weather would have it, our efforts at perfect testing were foiled at times by wind, but groups were comparatively consistent regardless. 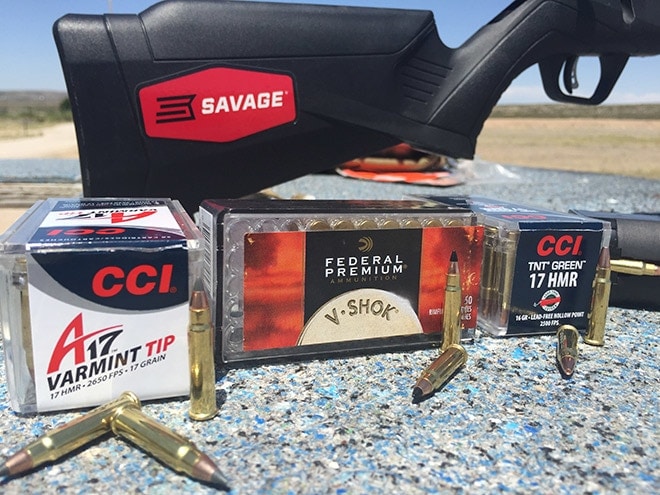 CCI’s 17 grain A17 Varmint Tip load is what we expected to be the best performer, since R&D resources were invested to optimize this load specifically for the B17 series. It did group well, but not as well as Federal Premium 17-grain V-Shok, with a Hornady V-Max polymer tip. That load was extremely accurate with five rounds producing a single ragged hole with an expert shooter firing from 50 yards. Bringing up the rear was CCI’s TNT Green, a lead-free 16 grain load. TNT Green had been the top performer back when we tested its 22 Winchester Magnum version in the Kel Tec CMR rifle. 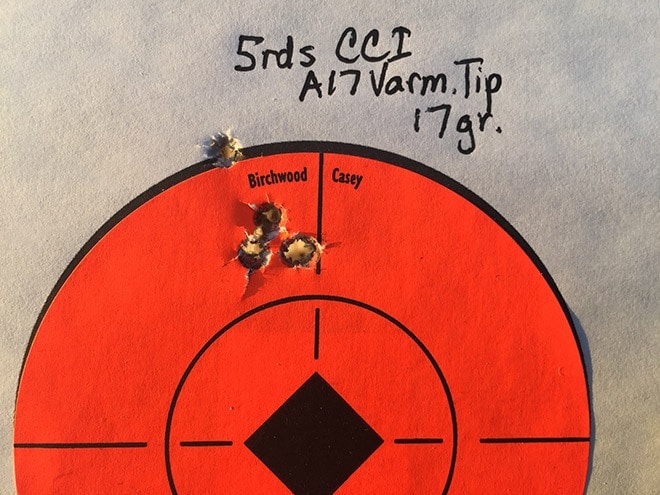 Five rounds CCI 17 grain A17 Varmint Tip. Though optimized specifically for this weapon, and performing well, it was not our tightest group. (Photo: Team HB)

All three brands’ best groups were formed when the rifle was fitted with a Gemtech suppressor. Results were the same in terms of ranking without the suppressor. This bolstered our confidence that, despite the wind moving the target at times, the ammunition ranking is correct. 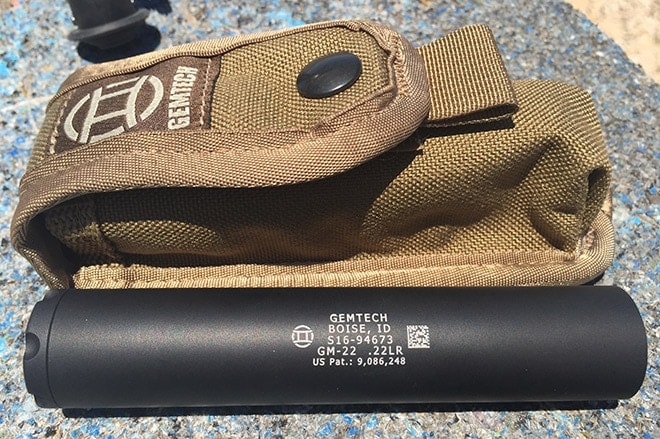 This Gemtech suppressor paired well with the B17. (Photo: Team HB)

Every rifle is different, and another may not get these same results. All three of these loads performed accurately enough for hunting of all but small rodents, where distances beyond 50 yards would make the TNT Green’s pattern a guessing game. 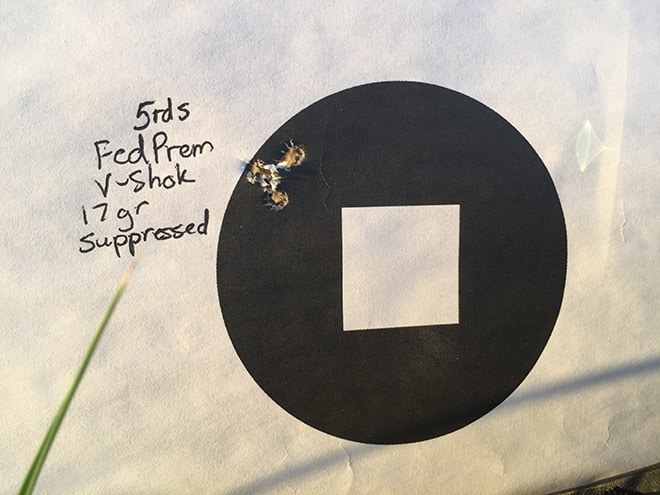 The nicely knurled bolt handle gives a positive grip for cycling ammunition. Not one problem was encountered with feeding or ejection of ammo. Seating and removing the mag is an intuitive process, though seating does require a firm press when the mag is full and bolt closed. 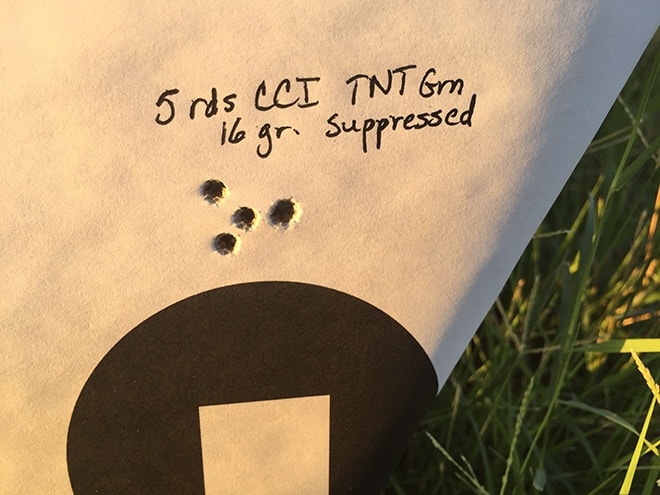 CCI’s TNT Green lead-free 16 grain load, suppressed. Our ammo comparisons—not exactly apples to apples since one isn’t the suppressed version. We had a flyer on that one, thanks to the wind. (Photo: Team HB)

Savage put their thumb-operated ambidextrous safety on the stock just behind the bolt. Unlike their centerfire rifles, this one has only “on” and “off” positions, with the ready state clearly indicated by a red dot under the safety switch. 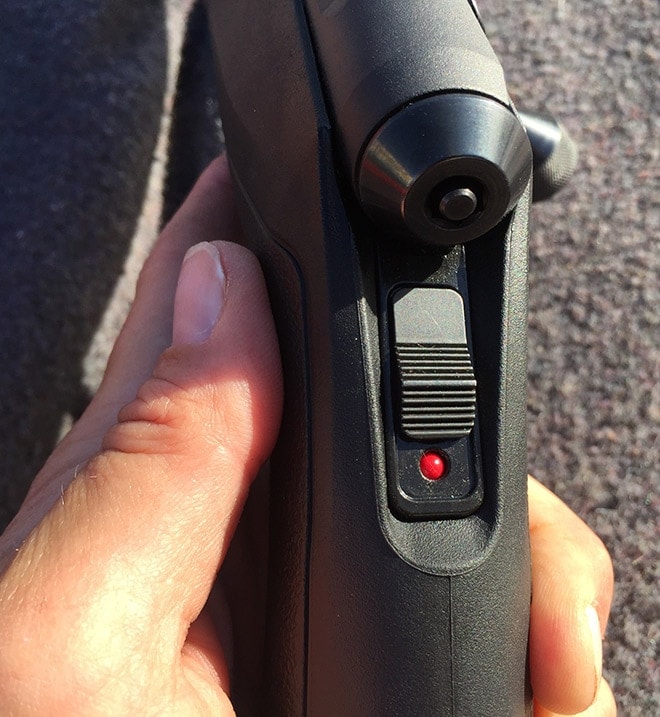 This little rifle is light and easy to manipulate. It’d make a great step-up gun for a youth or any new rifle shooter who’s already established their capability on iron sights. If irons were present, this would make a perfect beginner’s gun as well. For farm and ranch use, a red dot optic would turn the B17 FV SR into a handy truck gun. Hunters will appreciate its far-reaching capabilities with a good magnifying scope like the Bushnell in our test.

With a red dot optic, the B17 would make a great farm and ranch gun. (Photo: Team HB)

MSRP is $364 for the rifle. Current online prices for the Bushnell 3-12x 40mm rimfire scope range from $121 to $182. With retail prices for the rifle being lower, one could even add the Blackhawk bipod to this setup and have a superb hunting tool for less than $500.