Most times, products made for multiple purposes suit no one purpose very well.  With that in mind, I had limited expectations for the Savage Model 11 Scout rifle.  It’s never been nicer to be proven wrong.

Although the topic has been covered ad nauseam in other scout rifle reviews, perhaps it bears repeating that the design, set up for a small, limited-magnification optic with long eye relief, was conceived by the legendary Col. Jeff Cooper as a handy solution to quick-engagement, short- to mid-range encounters, offering the advantage of keeping both eyes open and maintaining awareness of immediate surroundings.  It was also meant to be handier to carry around than a typically heavier long range rifle. 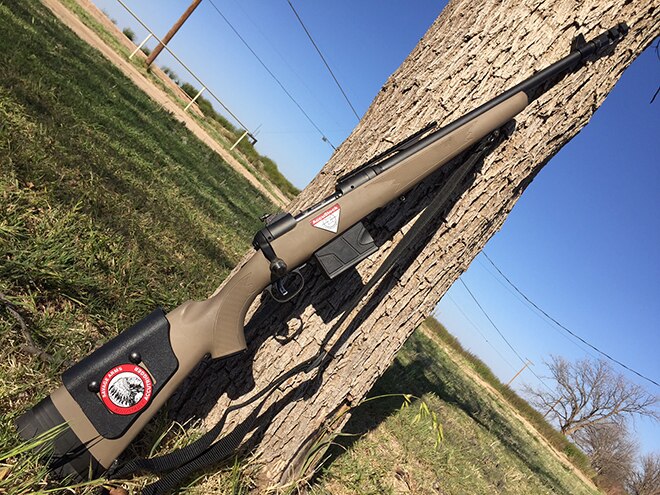 Savage Arms reportedly has some manufacturing delays due to order volume in the past year or so.  A few months transpired between the time I requested the Model 11 for testing and delivery.  Some of that was due to a change in personnel, but both the former and new representatives said there have been delays.

Finally, the call came from my FFL—the gun was in.  The shop owner said “some stuff was rolling around in there, so I put it together.”  The owner’s manual states the bolt and baffle are shipped in the box but not installed.  Everything looked and seemed to function normally at first examination. 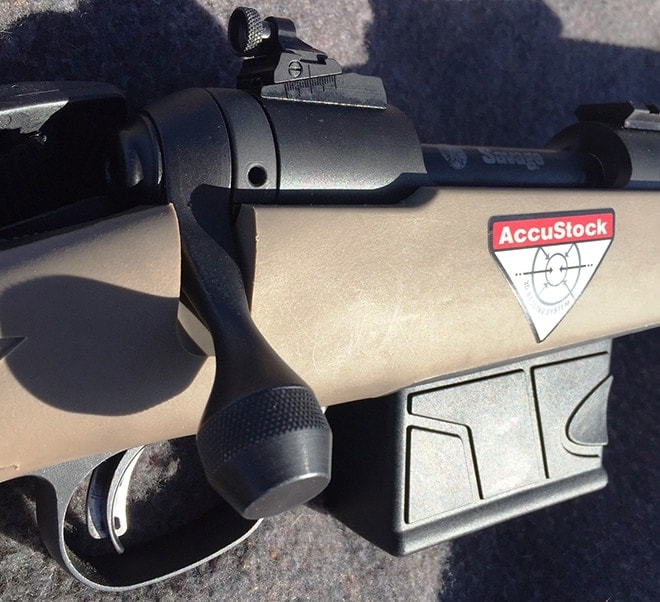 The baffle ring was something we’d never seen, and isn’t described well in the owner’s manual, so we reached out to our company rep asking for details. It isn’t really a ring but a half-circle of steel that fits, jigsaw-like, around the bolt just fore of the handle.  The open end faces down and isn’t exposed when the bolt is in the forward position.

Savage’s representative explained the ring blocks gases from escaping through the bolt cut-outs and getting into the shooter’s face.  It also helps with ejection. 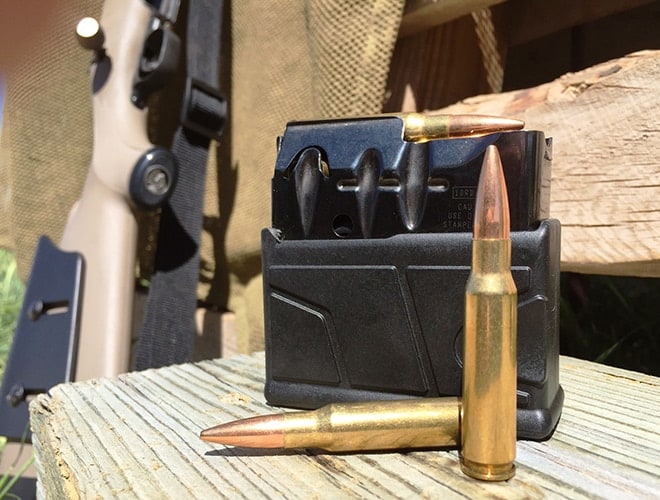 A single, ten-round box magazine was included.  Empty, it rocks into to place easily with a slight back-to-front insertion—as expected, firm pressure is required to seat it when full. The release is also easy to operate. Though small, the way the release is set inside the magazine well accommodates a gloved hand.

To this reviewer, the looks of this rifle chambered in .308 Win are just right.  The synthetic, flat dark earth (FDE) stock and black trim are a handsome combination. The stock has traditional hunting rifle checkering, offering grip and a nod to safari/hunting applications.  The shape of the stock is traditional too. 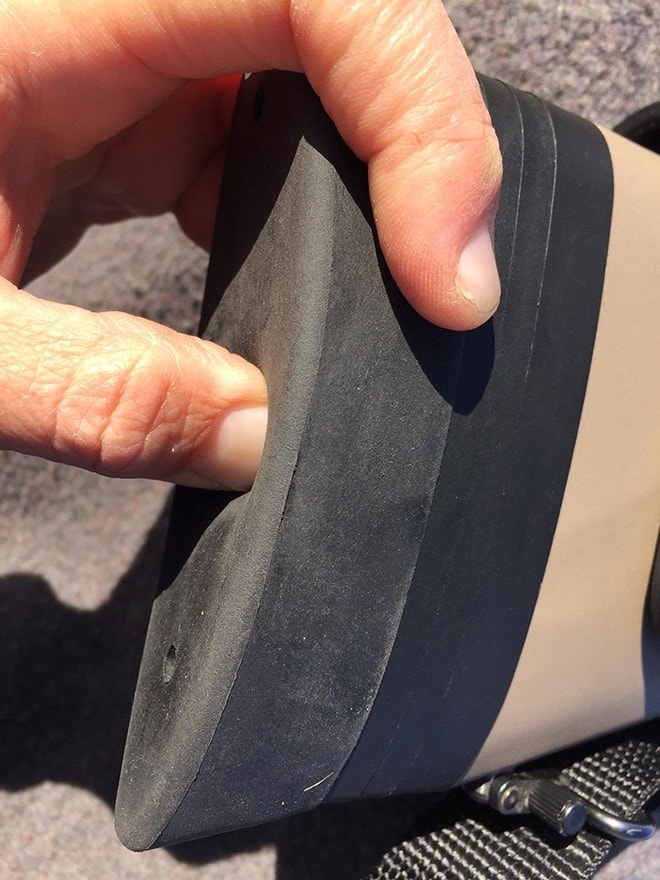 Black with brushed stainless, and olive drab with black carbon steel finish are other color options.  To each their own; I think FDE and black are a great combo.

Tradition ends where the hardware begins on the Model 11.  Savage chose a beefy tactical flash hider for the muzzle, which is removable for installation of a suppressor.  The removable, but non-adjustable, military steel front sight has a narrow middle blade which makes for precise sighting.  Then there’s 6-3/4 inches of Picatinny rail, which makes for easy installation of an optic.  Behind the bolt, a fully adjustable rear peep sight is mounted.  The aperture is quite small, again making for precise-as-possible aiming with the irons.  Savage chose a sturdy, fat bolt handle with checkering for traction. There’s a three-stage safety on the tang, which proved handy for both left- and right-handed testers. 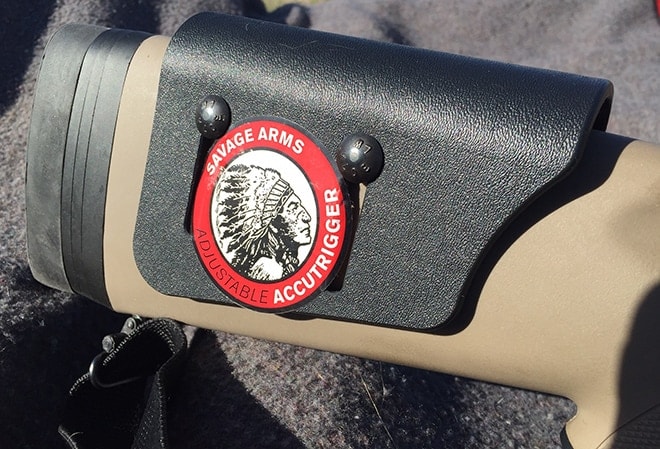 Adjustable comb for use with or without an optic. (Photo: Team HB)

Underneath the stock are three swivel studs for mounting whatever sling a person prefers.  I chose a traditional two-point configuration, and found the rifle easy to manage and shoot with that setup.

The 18-inch barrel is long enough to deliver accuracy. There’s a lot packed into the 11 Scout’s 7.8-pound package. In other words, it’s short and light enough for this five-foot-five-inch writer to handle without looking or feeling dwarfed.

The information pipeline could use improvements 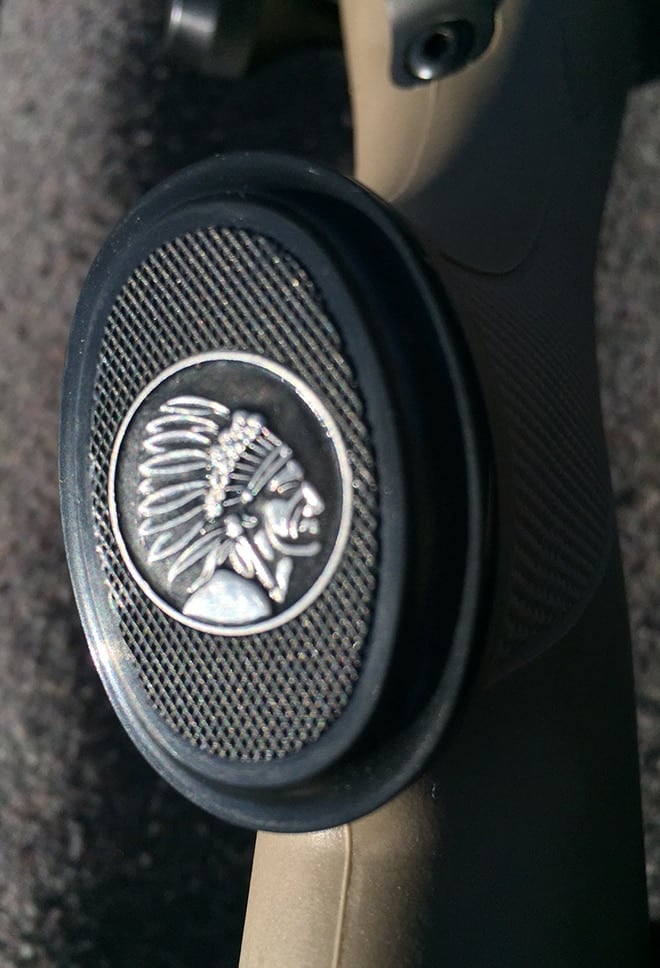 One of the few bits of flash on the Savage Model 11. (Photo: Team HB)

Logging onto the Savage Arms website, it wasn’t immediately obvious where to find this rifle.  Turns out it’s categorized as a law enforcement model. I’ve personally never seen a duty rifle in the color combos offered, nor one that’s a scout.  Savage could broaden the spectrum of labels for this one, at least to include hunting.  It’s tempting to draw a connection between the label and the company’s location in increasingly restrictive Massachusetts, but I’m just thankful it’s made in the USA.

Savage isn’t alone in its apparent effort to save resources by making a one-size-fits-all manual.  The 11 Scout isn’t even mentioned specifically in the manual that was included with this gun, though several others are.  This leads to confusion and frustration.  For example, we were interested in the twist rate of the rifling as a test of subsonic ammunition was planned. The manual says the twist for their .308s is either 1:10 or 1:12, which didn’t help. The original specification list for the rifle reads “Twist Rate:  N/A.” Fortunately, Savage’s marketing company has responsive human reps, and through that channel I received a better spec sheet showing a twist rate of 1:10. 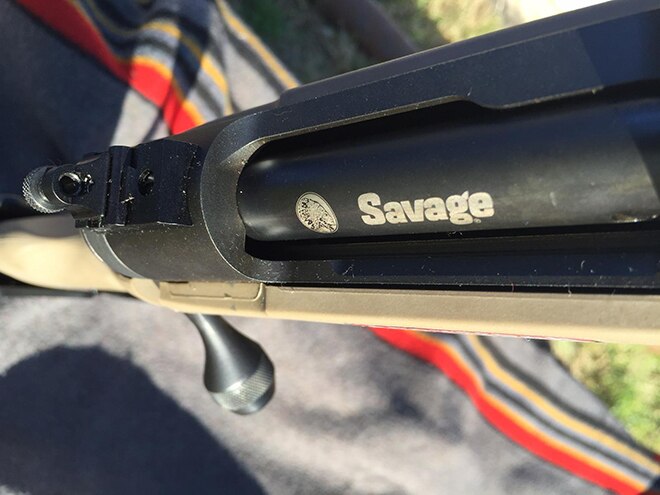 That new spec sheet failed to inform me this gun is available in other colors.  That, I found that out on an auction site.

The dearth of model-specific information did lead to one pleasant surprise.  The manual states the box magazine’s capacity is four rounds.  I couldn’t help but smile when, on the range, I loaded four, and then another, and another… until there were ten rounds loaded.  Very nice surprise.

For all my complaining about the owner’s manual, a nice thing in it is a QR code.  It links to the parts-ordering section of their website.

Bolt removal involves pushing a button and the trigger at the same time. (Photo: Team HB)

Removing or re-inserting the bolt is a simple matter of simultaneously depressing the trigger and a small button just in front of the trigger guard. The trigger has a safety lever like the one on a Glock and many other semiauto pistols.  Savage’s Accu-Trigger is used on this gun.  It ships with a tiny tool for making custom adjustments.

Moving on back, there’s a sniper-rifle style comb in contrasting black. Adjustments can be made with an Allen wrench, which is included with the gun.  The comb can be raised for use with various heights of optics. I found the bottomed-out position best for shooting with irons.  Not only is the height adjustable, it can be canted upward or rearward. 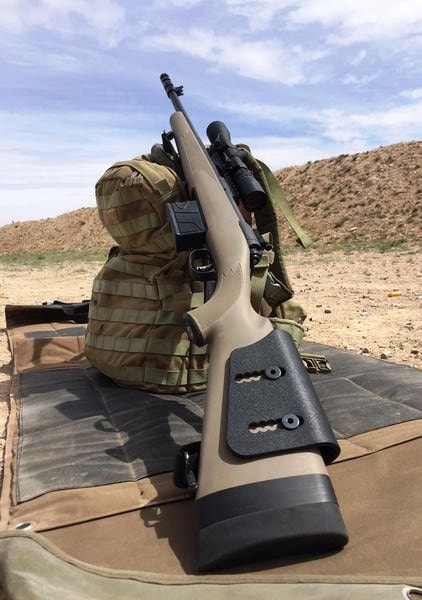 The final boost to practicality is the recoil pad system.  A very cushy, inch-thick rubber pad brings up the rear.  This pad is removable, taking the gun down to its black synthetic butt piece.  This is Savage’s way of providing an adjustable length of pull depending on the shooter’s stature as well as style—squared-off or right-angle to the target, or something in between.  I appreciated the softened recoil regardless of my target orientation.

Perhaps best of all is the barrel and action system.  Savage calls it accu-stock.  The barrel and action are supported by three long ribs, to provide stability and the effect of a floated barrel. This high-end feature seemed to make all the difference in accuracy and definitely boosts the overall quality of the gun. 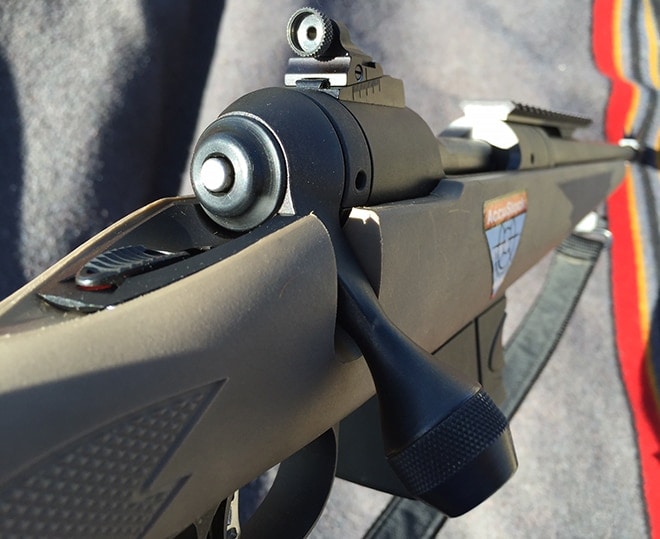 Our initial target was set at 50 yards.  Shooting from supported prone and using the iron sights, shot groups were surprisingly precise—about two inches per three-shot group.  The out-of-the-box sighting was about seven minutes of angle (MOA) or 3.5 inches, left, and about twelve MOA (six inches) high, at our 50 yard distance. After one rear sight adjustment, corrections were accurate according to our educated guess (having not referenced the manual), and stayed consistent during this first trial. 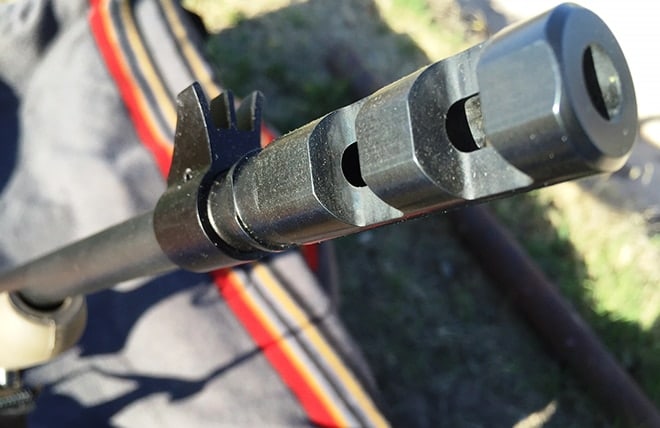 Trigger function was excellent.  Assuming the inconsequential trigger block is disengaged, it takes very little to break the shot.  At about the point where the flesh of the finger is indented only 1/8 to ¼ of an inch, the gun goes bang. Out of the box, it feels as good as any trigger I’ve used on much more costly precision rifles. There was no need to adjust it. 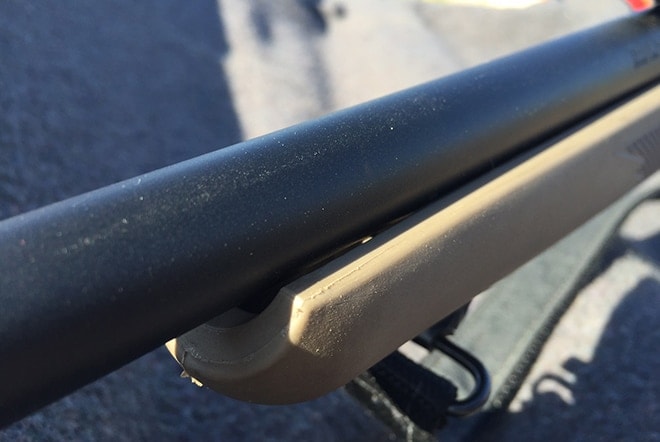 Any truly fair test of rifle accuracy should include use of a magnifying optic, at least when the shooter, like me, has imperfect vision.  After as much research as is available through friends and the internet, we chose a Burris 2-7×32 purpose-made scout scope with Leupold quick-release mounts.

Several brands and grades of ammunition were tested, inasmuch as this gun test was also a test of certain ammunition brands to be featured in another article. 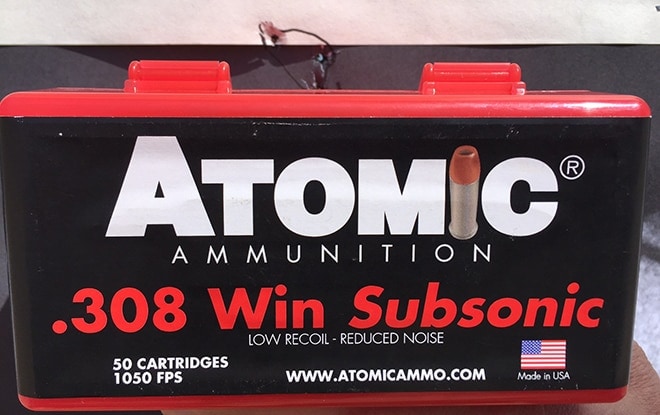 After an initial 40-round plinking session, a series of three- and five-shot groups were fired from a bench rest at 100 yards in clear conditions, 68-73F temperature, at 3,111 feet elevation with a quartering wind from three to 15 mph. Not quite a scientific trial, but as close as possible considering conditions.

These results represent the best of the two shot groups: 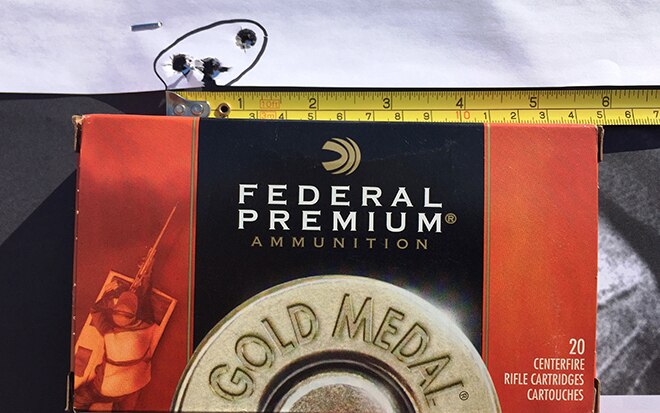 We had some feeding difficulties, only with Federal Gold Medal Match and PMC X-Tac.  The bolt would override the top round regardless of whether it had ten or less rounds on board, and several reps of working the bolt were necessary to feed.  It would be interesting to see if this happens with other magazines.  It’s an unfortunate problem to be occurring with the load I’d pick for hunting and the one that performed most accurately.  (And yes, the mag was seated properly).

Siskel and Ebert would say— 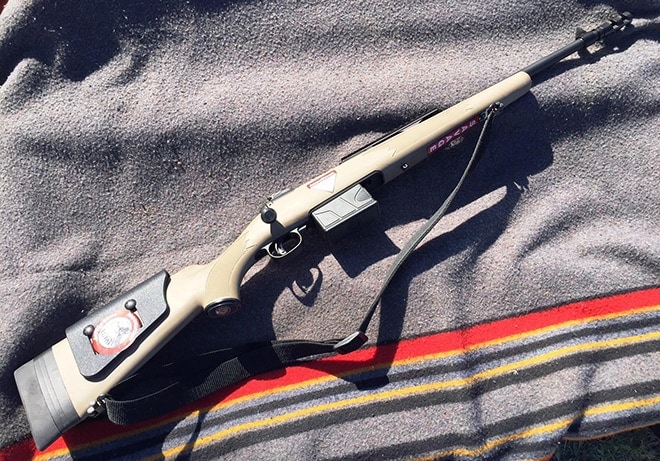 An enthusiastic two thumbs up for the Savage Model 11 Scout.  It delivers a number of high-end features, great looks, sturdiness, and versatility for a reasonable MSRP of $794.  Real-world prices are around $700 including usual shipping and transfer fees.  In comparison to other guns at that price, this is an incredible value.