Gun Review: Smith & Wesson gets it right with M&P Compact 2.0 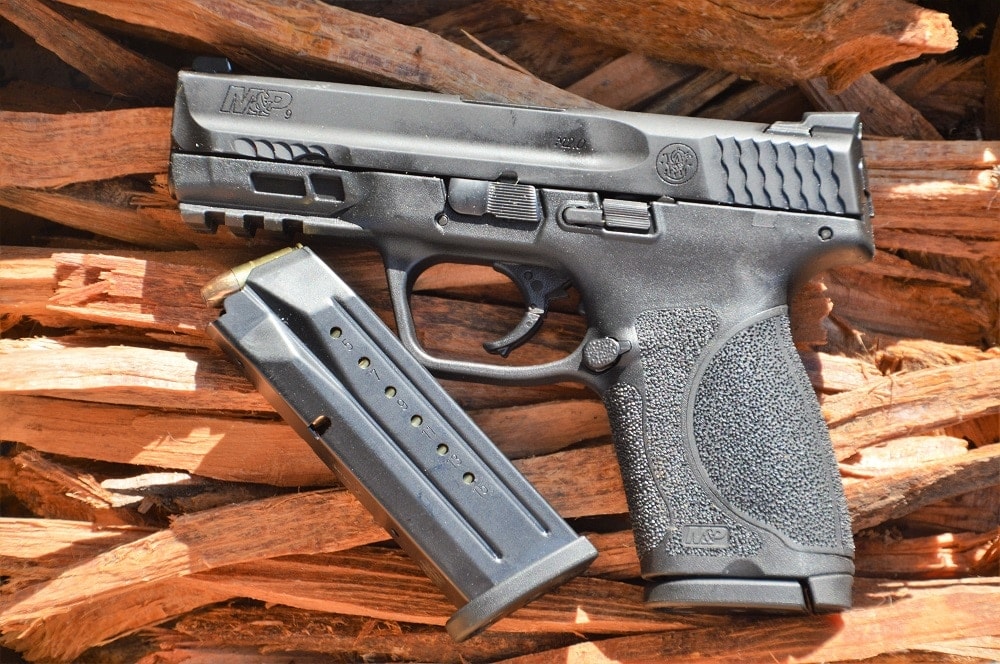 Smith & Wesson took years to fill in the blank between their full-sized M&P and Shield series polymer framed handguns, but the Compact 2.0 was worth the wait.

Debuted last October, the Compact, a 15-round capacity medium-sized entry to the M&P 2.0 line, was from the beginning thought to be a direct contender to niche populated by the well-liked Glock 19. The G19 has long been the people’s champ when it comes to a double-stack 9mm handgun that is serious enough to provide solace if needed while compact enough to carry without pulling your pants down every other step. 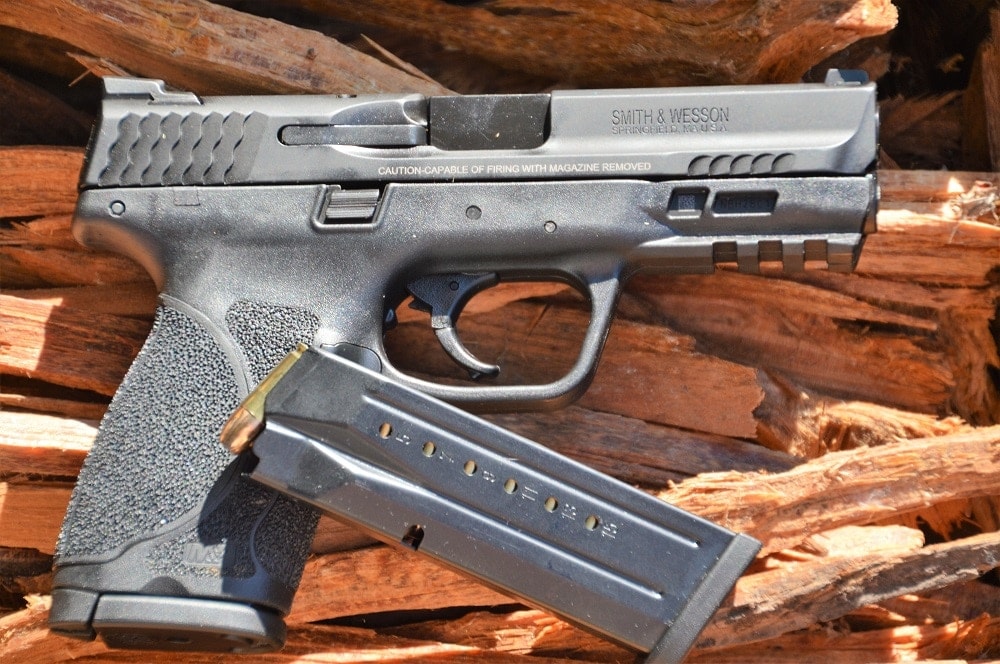 Going through the specs, the Compact uses a four-inch barrel and has a 15+1 round capacity in 9mm and 13+1 in the .40 variant with an unloaded weight of just under 24-ounces. This is a near dead ringer in comparison to the Glock 19 and 23 and a hair lighter than the 26-ounce P-10 C series from Czech gun maker CZ. Other features on the Compact include an accessory rail, four interchangeable palm swell grips, stainless slide with an Armornite coating, and an 18-degree grip angle. The gun ships with two magazines.

MSRP on both caliber models is $569, but you can find them for closer to $450-ish NIB if you look around.

Over a five-month period, I put 2,000 rounds through the new Smith, give or take a handful, and carried it for approximately 400 hours. During testing, we only experienced one (1) malfunction: a failure to feed whose cause was quickly traced to a fresh magazine that had not been fully seated in the well on an adminstraive reload. The lightest load was a variety of 115-grain rounds from various makers, the heaviest, 147-grain. 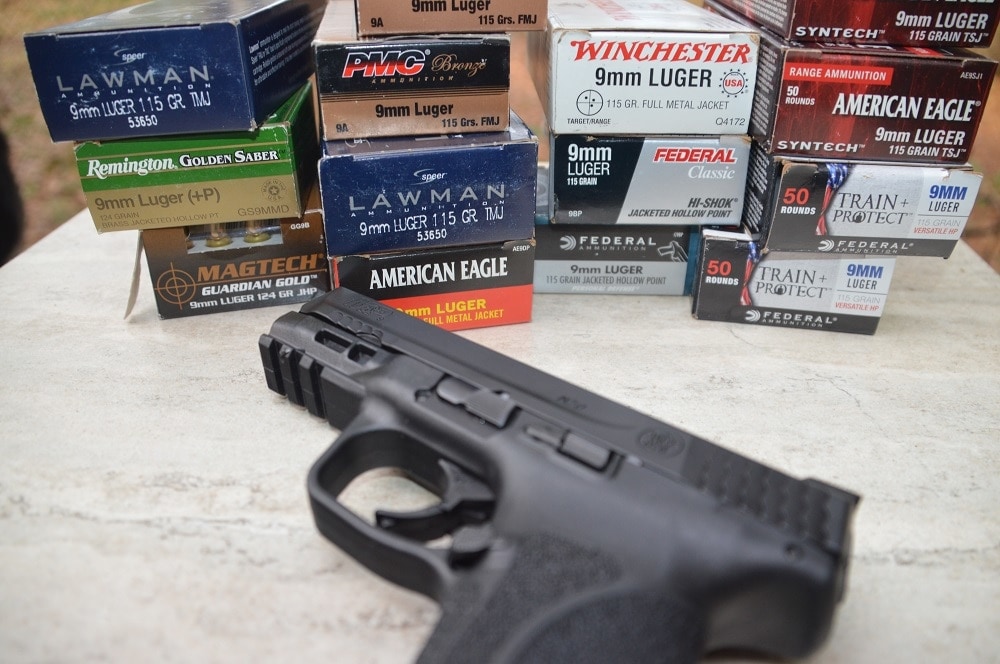 Handling was easy and, while recoil was by no means a significant issue, the extended internal chassis helps tame flex in the polymer frame. The feed ramp on the barrel throat is nice and wide and had no issues feeding a variety of bullet types with varying geometry.

When it comes to making holes and ringing steel, the Compact was very accurate for a carry gun. Typical shooting drills across a variety of targets from seven to 25 yards produced results that were almost mind-numbingly predictable. For reference, the manual states that average accuracy results, “based on several handguns selected at random” was 6.3-inches at 21 yards, which my experience on the line approximates. 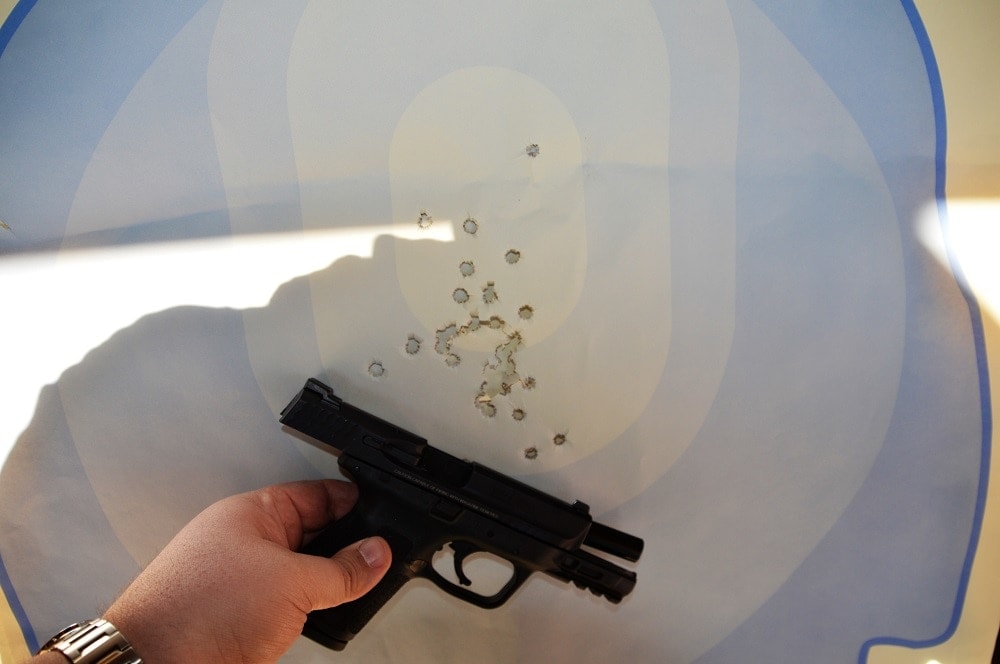 While we didn’t go searching for a Ransom Rest, we found the Compact delivered on target out to 25 yards with almost boring repetitiveness.

The pistol has very serious — steel — sights in a traditional white three-dot pattern that are dovetailed into the slide and are fast to acquire when coming up on target.

The trigger, as in past 2.0 installments, is based on Smith’s Pro series guns and is an improvement over legacy stock M&P triggers by far. It breaks clean and has an audible reset. On the downside for me is the fact that it creeks like a rusty hinge on a screen door when you are taking up the slack if you are listening for it. This is the nature of the prominent curve to the bottom of the two-piece safety trigger and, while functional, just doesn’t melt my butter, but again that is subject to the end-user’s personal preferences. When compared to a nice single action hammer-fired gun, there is a lot of travel, but for a striker fired gun it is on par if not better than some rivals. For trigger nerds, Apex offers a flat faced drop in aftermarket replacement.

The gun was shot and handled in the snow, around sand and salt water, and in 90-degree heat with 90 percent humidity all without cleaning and on inspection afterward, I noticed no signs of corrosion, rust or excessive slide wear, so the Amorite finish seems to be working as advertised. The light gray magazine followers, however, show grime fast but relax, it is just cosmetic. 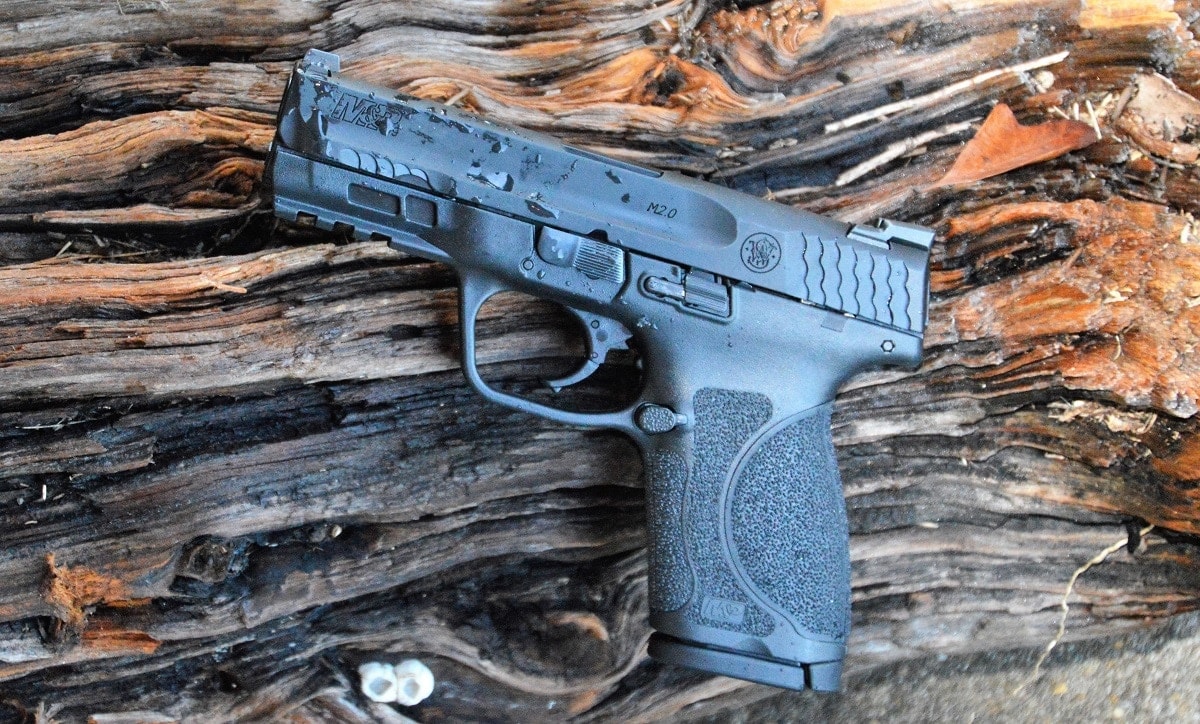 Speaking of mags, the handgun has good drop-free magazine ejection and the metal body mags include witness holes on both the port and starboard sides of the body.

When it comes to ergonomics, the grip, which is angled at 18-degrees, has very aggressive texturing that feels akin to 60 grit sandpaper. Chunky guys with sensitive bellies and a holster with no sweat shield, beware. You could probably stipple it if you want, but I think that would just smooth out the texture if anything. Still, the texturing is not as high-profile as some that have come and gone from the firearms scene in recent years (RTF2 anyone?).

The replaceable palm swells change out quickly and without tools, with the backstrap easily removed once you twist and pull off the lanyard loop at the base of the magazine well — which also contains a tool that can be used to take down the pistol without pulling the trigger. 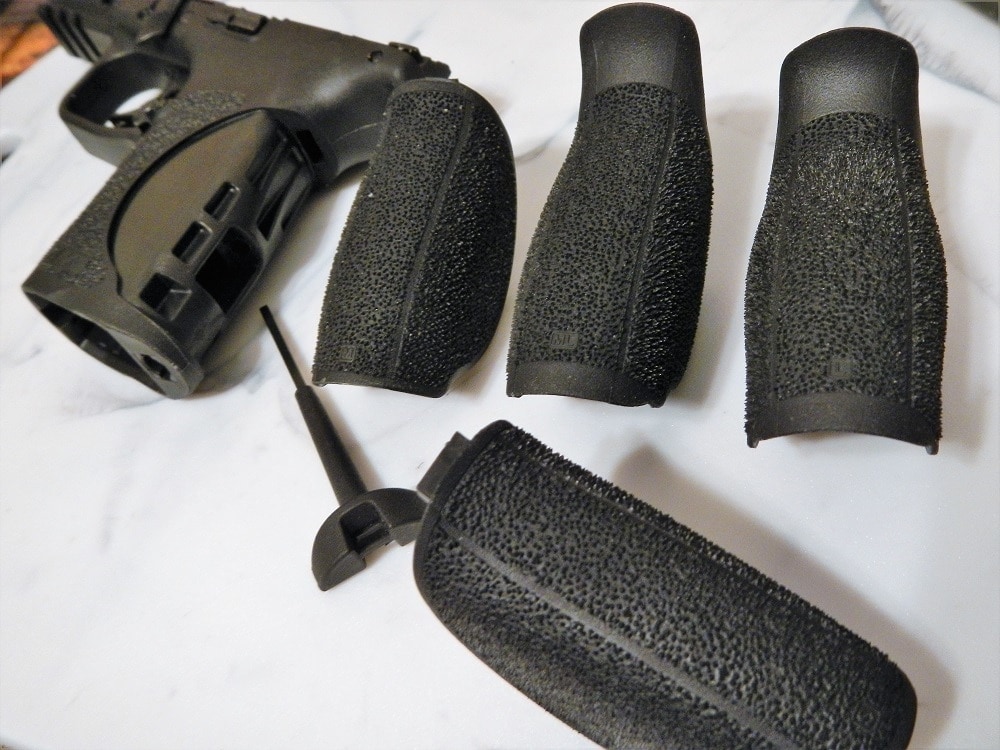 Drink in that texture! Each of the swells is marked at the bottom (S, M, ML, L) and yes, I do think that is skin deep down inside. You aren’t going to drop a wet M&P Compact 2.0 for lack of palm purchase.

The small half-moon dimples at the base of the magazine well help provide a bit of real estate to strip away magazines that don’t drop free for one reason or another.

The slide is streamlined, another point of lineage the Compact shares with the rest of the 2.0 family. The front slide serration on the slide, much abbreviated when compared to the full fish scale waves on the rear, is a welcome addition for those who press check, though they are very narrow. 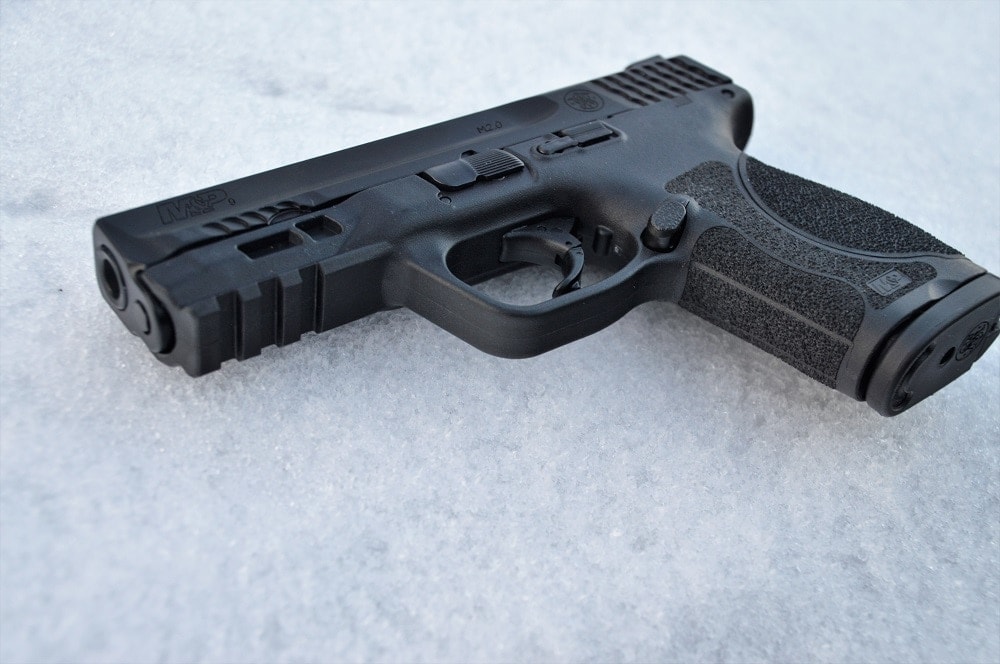 The ambi slide stop is recessed and protected by a frame molding that both make it less likely to snag on clothing when drawing, and less likely a user will utilize it as a slide release as it is hard to actuate, especially, in my experience, in one-handed firing with the off hand. Another nod to ambidextrous use is in the reversible magazine release button. 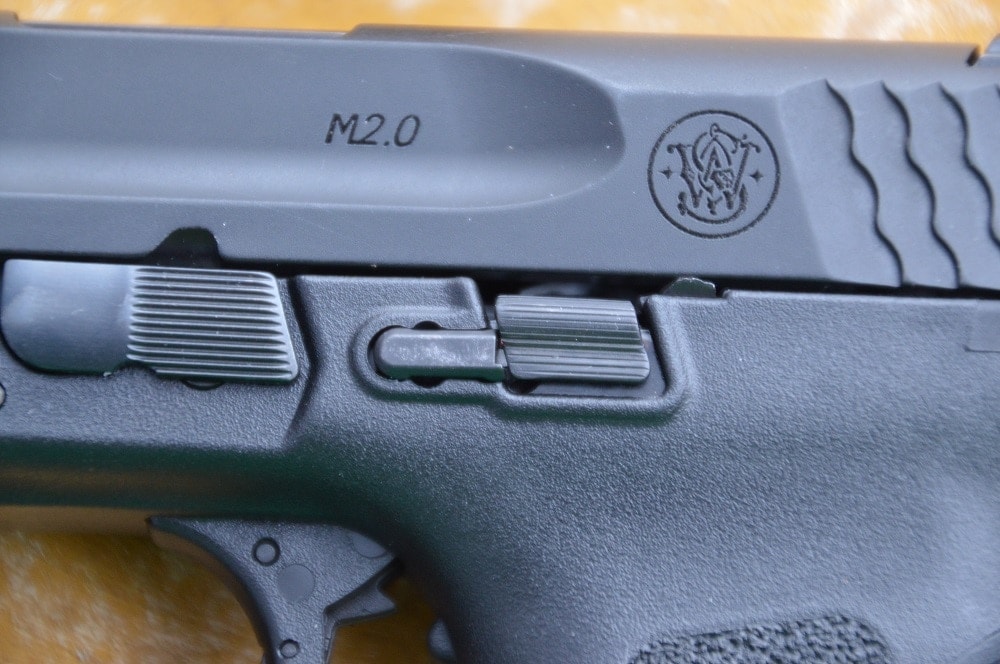 Say it with me: slide stop, not slide release, though you will note that, as the widest part of the slide, it does wear after walking.

Disassembly is easy and traditional with a frame-mounted takedown lever oriented to the port side of the gun. As mentioned above, the lanyard loop key tool can be used to release tension on the striker, so the gun can be stripped without pulling the trigger. Internally speaking, it should be pointed out that the color-coded captured guide rod is steel, not plastic, and that’s a win all day.

The whole affair is sandwiched in a black plastic hard case that has lots of room to spare. 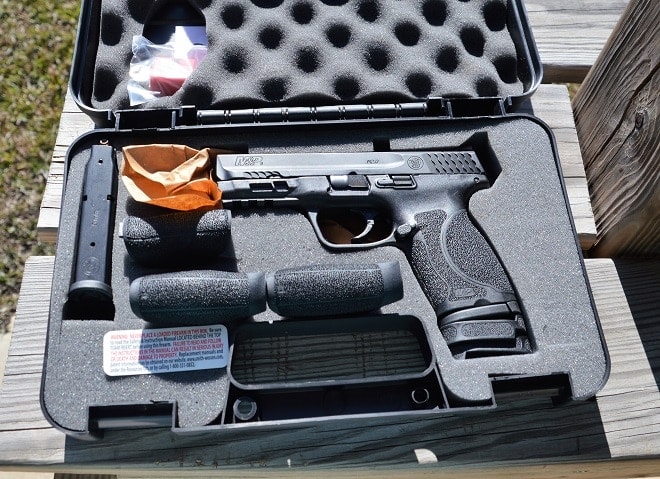 Sleeves allow users to pack a full-sized M&P magazine in the gun without looking odd. Optional versions include a frame-mounted manual safety lever.

While there is no shortage of holster makers leaping at the chance to make leather and Kydex for the new Compact contender, keep in mind that the very similar profile to the G19 means that if you have holster on the shelf made for the Austrian gun or a comparable pistol, a new Smith could very well end up fitting it like a glove. 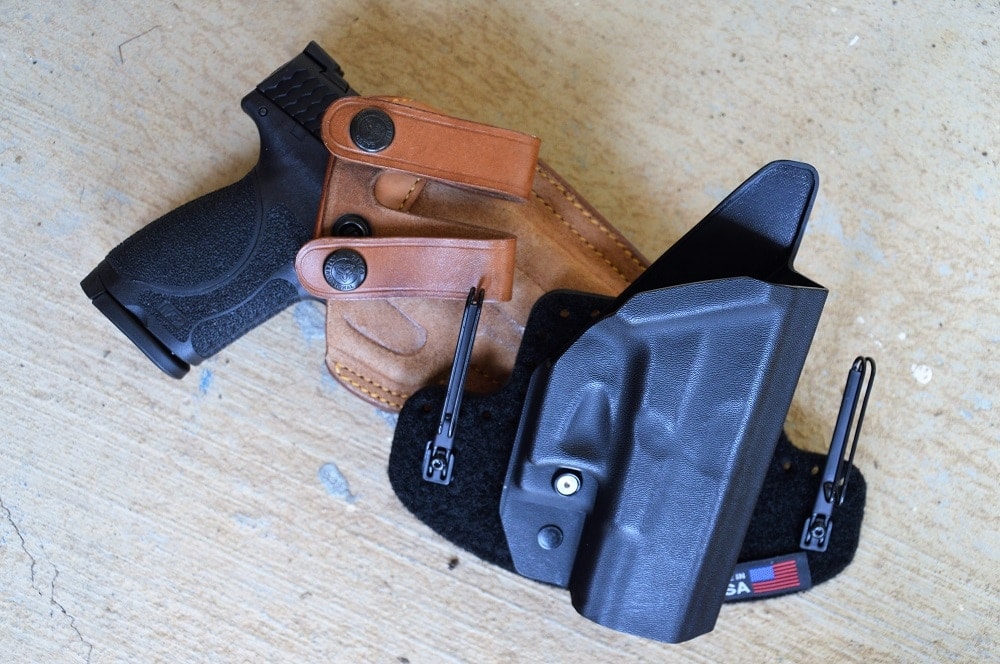 While these offerings from Galco (a Royal Guard model) and Massaro Holster Works were made for G19s, they worked well with the Compact Smith

We tried a few weapon mounted lights on the Smith and they worked as advertised. 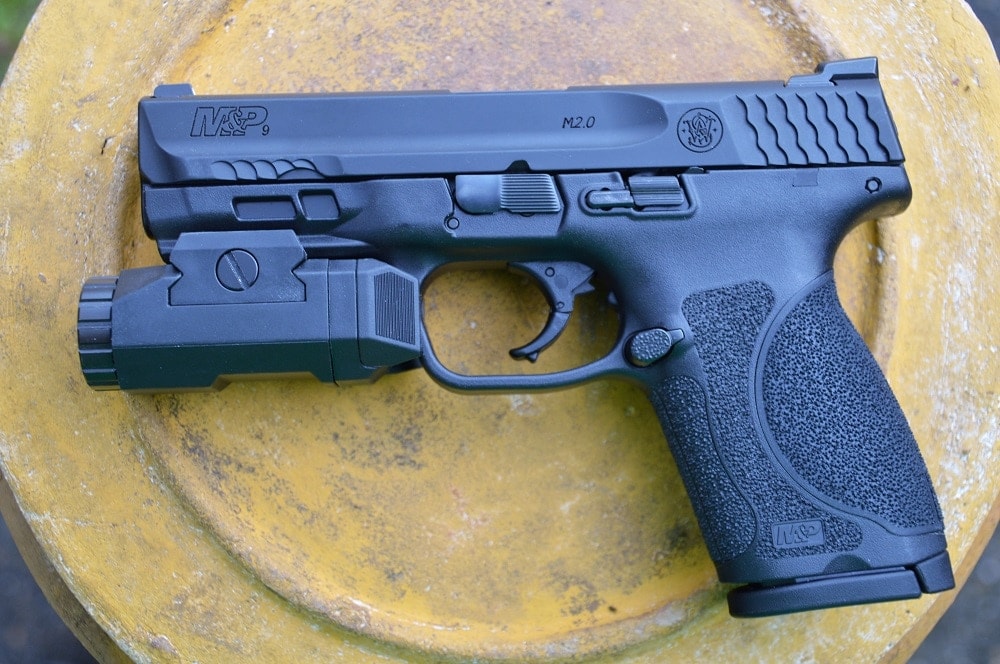 Rocking out an InForce APL. The APL-C will likely fit flush as will the SureFire XC-1B.

Ok, ok, but what about the elephant in the room:

How does it compare to the Glock 19?

Here we see the Compact Smith & Wesson field stripped against a G19 Gen 3, likely the most common variant of the Glock smoke wagon in circulation. 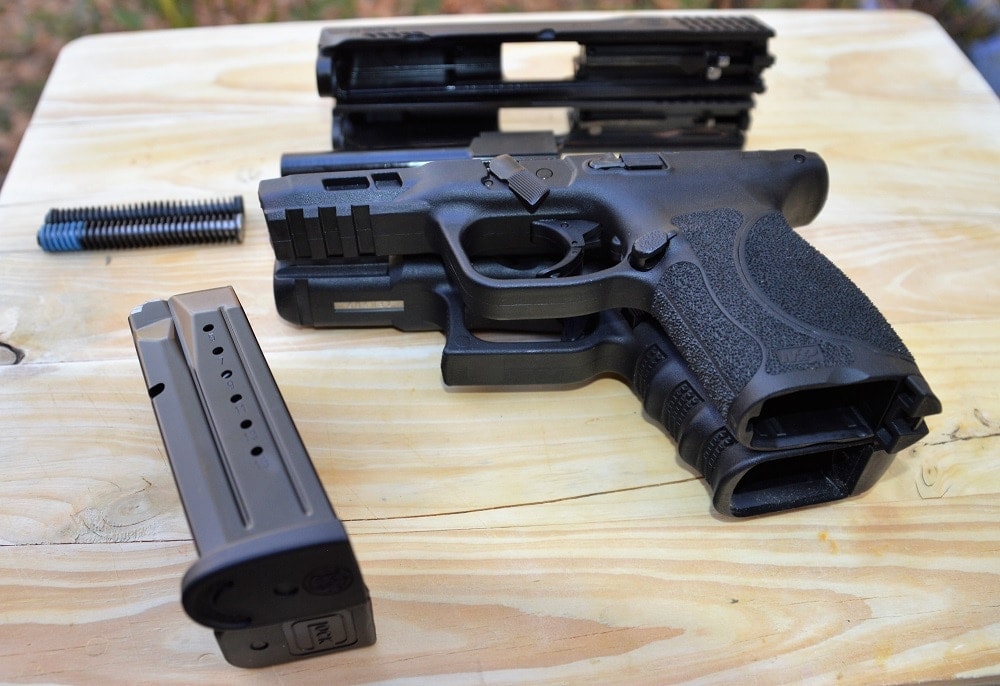 Note the different trigger guard shape with a smooth front on the Smith, as well as the more elaborate 1913 rail for accessories when compared to the Glock. Size is very similar in almost every dimension except for the slide, where the S&W is a hair longer.

In a side by side comparison, you can note the Smith’s steel guide rod, forward frame serrations, and longer slide rail. And yes, it should be noted that Gen 4 and 5 G19s have an upgraded spring and replaceable palm swells, but the overall envelope of the Gen 3 is primarily the same. 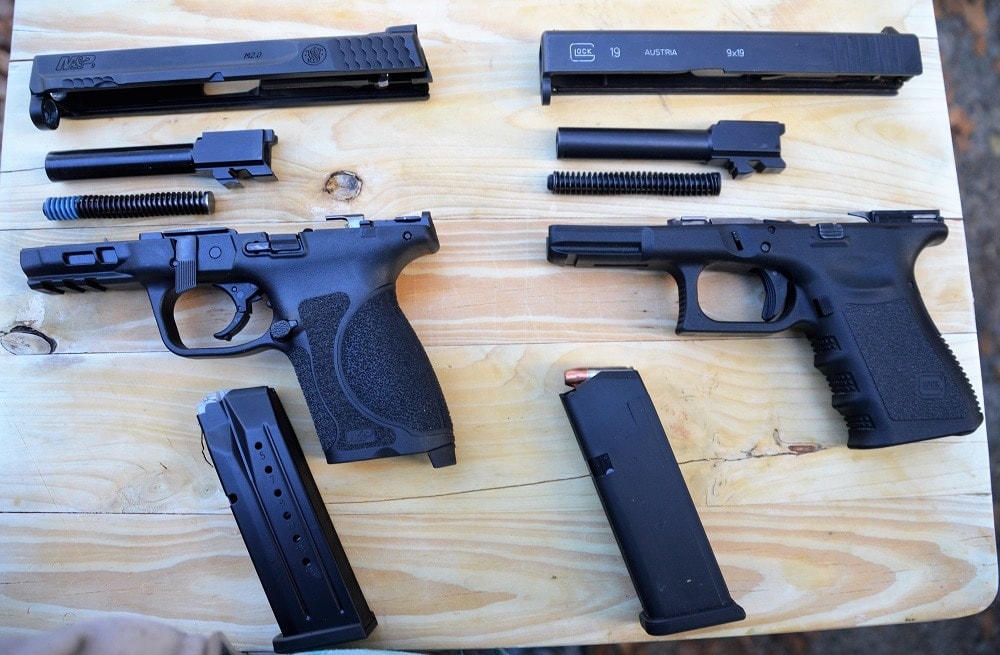 In closing, the Compact is a long-awaited offering between Smith & Wesson’s Shield and more full-size M&Ps. The gun points, carries, and shoots well, looks good, is made in the U.S., and, other than a few nitpicky gripes, I have nothing to complain about. Smith could have done a lot worse. Is it a “Glock killer” as so many have offered? Smith fans will likely answer in the affirmative while Glock’s fan base is unlikely to be swayed by anything from Massachusetts and not Austria by way of Smyrna. For those predisposed towards neither court, it’s refreshing to have options. 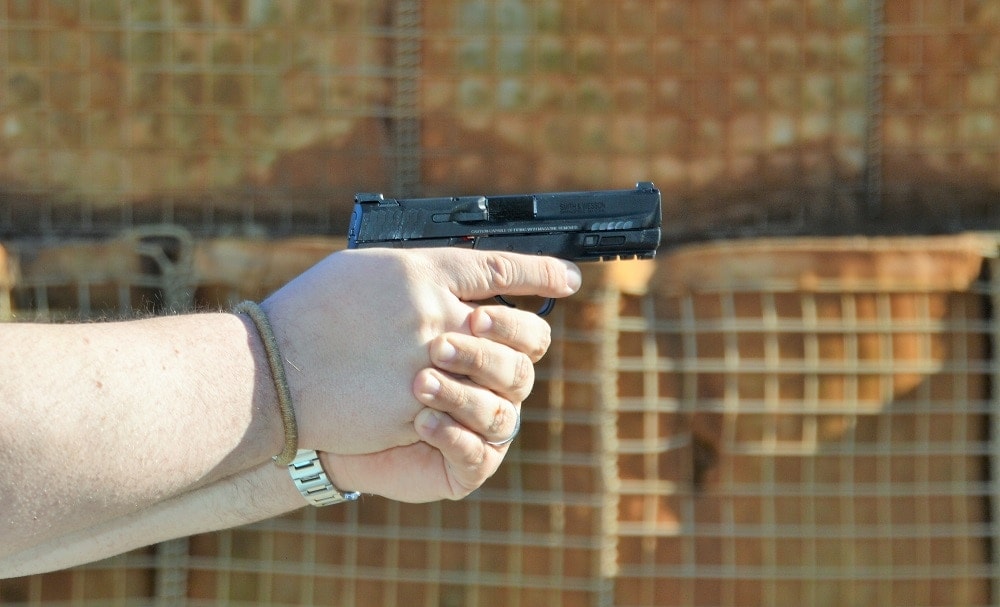