Out of production but not outdated: The Smith & Wesson Model 65-4 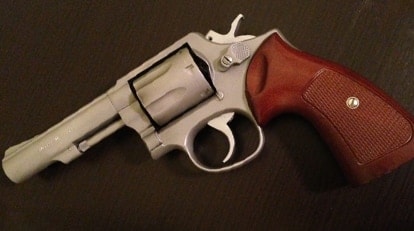 The Smith & Wesson Model 65-4 in all its stainless glory. (Photo by Stewart Finkel)

Everyone remembers their first gun. Whether it was a single-shot .22 handed down from your father or granddad’s old 20 gauge, it is a memorable experience.

In my case it was a beautiful stainless Smith & Wesson 65-4 revolver chambered in .357 Magnum.

The Model 65 is built on S&W’s K-frame, a medium-sized revolver type manufactured from 1972-2004 and marketed primarily to law enforcement. Guns like mine rode on the hips of countless officers for over two decades. If the boys in blue trusted their lives to the Model 65 than it’s good enough for me.

The Model 65 is the big brother of the Model 64, a stainless variant of the Model 13 chambered in .38 Special. It comes with a nice matte steel finish that resists corrosion and wear. If it can hold up to Louisiana humidity than the Smith engineers certainly did their jobs. The suffix “4” designates a 4-inch barrel, which is identical to what ammo manufacturers test their loads in. I’d love to say I chose the 65-4 for that brainy reason, but the truth is less impressive: I was a newbie. I chose the 4-inch barrel over the too-short-for-serious-work 3-inch and the comically over-sized 6-inch for purely aesthetic reasons. The Model 65-4 just looked perfect.

The Model 65, like most wheel-guns, carries six rounds. If the hard-hitting .357 Magnum is too much gun for your wrist or wallet, .38 Specials in +P and normal variety can be loaded as well. Ear protection is a must when using powerful cartridges, especially with pistol-length barrels. I’ve heard .357s described as a grenade exploding and can’t argue with that assessment. Initially I didn’t appreciate the advantage of using .38 Specials in the same gun until my wife’s first trip to the gun range. While she handles the .357’s recoil very well, the soft-shooting .38s are ideal for more economical training. It also allows one to master the fundamentals of shooting revolvers without developing bad habits. After an hour of trigger time with the 65-4, she was hooked! 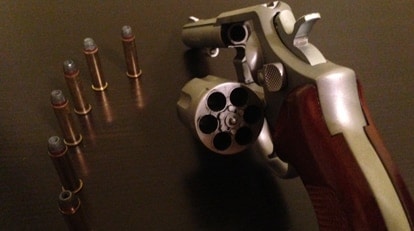 Six rounds of .357 Magnum in such a small package? Yes please. (Photo by Stewart Finkel)

The K-frame “medium revolvers” are some of the most comfortable in the world for average-size guys. With the factory stock, the Model 65-4 fits my smaller hands like a glove. If you have larger hands you may want to invest in some larger Hogue or Pachmayr grips, but I’ve had larger shooters handle it without complaint. The included wooden grips look superb to me, but a rubber grip could help tame some of the residual recoil.

Additionally, the whole 36 ounces of gun along with the heavy bull barrel also help soak up recoil. These features create an incredibly mild carry gun, especially with its diminutive size and powerful round. My wife, who has dainty hands, can put rounds on target in a frighteningly tight group. Needless to say, I never come home with lipstick on my collar.

The trigger job is equally crisp for single- and double-action shooting. The longer double-action trigger pull is nothing to scoff at, but the single-action pull is a work of art. While only double-action shooting should be employed in defensive situations where fine motor skills are often lost, shooting single action at the range is an absolute joy. My range buddy, who is a fan of Glocks and ARs, raves about the 65’s smooth trigger every time he shoots “The Hand Cannon”, as he calls it. He always seems a little let down when he hands it back and returns to his semis.

The fixed sights on the gun are caveman simple and surprisingly accurate. While I make no claims about being the next Jerry Miculek, tin cans and paper bullseyes are in serious danger within 50 yards. On a recent range trip a friend took the little 65-4 for a spin. He set a target about 75 yards away, squeezed off a single round and went to check his accuracy. We all wanted to see and while he didn’t manage a perfect bullseye, the round landed center mass. At 75 yards that’s nothing to sneeze at. 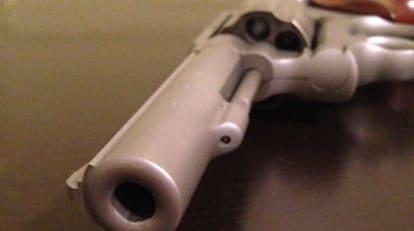 To carry or not to carry

Despite all its perks the hefty Smith does have a few drawbacks. The K-framed medium revolver is difficult to conceal here in Louisiana where shorts and T-shirts are the norm. Being an educator, this doesn’t concern me as much since at least 40 hours a week I can’t legally carry it anyway. If you live in an open-carry state like Louisiana, you’ll find that the Model 65-4 rides equally well in both a belt and shoulder holster.

Being a wheel-gun it is mechanically very simple. Kept clean and oiled, the Model 65-4 will give you years of service. The only issues I’ve encountered are the occasional stubborn shell-casing not extracting. The most likely culprit is the combined heat of Louisiana summers and rapid firing. Running close to a hundred rounds through a gun rapidly will generate intense heat. Plinking in August in Louisiana is a hot affair anyway. Combined, the two and things get positively searing. While I’ve read older Smith’s like the 65 can’t stomach a steady diet of hot loads, my example doesn’t show any damage. Although I haven’t put thousands of rounds through mine — yet. 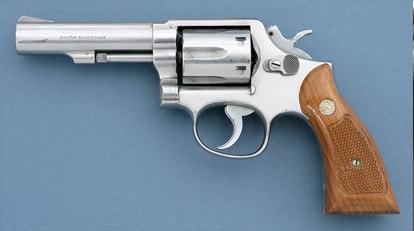 Since the stainless six-gun is no longer in production, used is the only way to go. Mine was purchased at a gun show wearing an “Almost Perfect” tag and a price of $350. The gun was in such pristine condition that I suspect it was one of the last off the assembly line. After negotiating (read: haggling) the price down to an even $300 I was out the door sporting a grin from ear-to-ear. It was the best $300 I ever spent.

For the money, this little beauty is a great investment. Shoot, it would have been a steal at twice the price. If you are looking for your first gun or wanting to add a six-shooter to your collection keep your eyes open for a Smith & Wesson Model 65-4. Whether at the range, hunting or protecting your loved ones it won’t let you down.