Ever imagine a time when gun development wasn’t based on gimmicks or refinements of old designs?

Every year, new firearms get introduced, which is good for the end user. There are more options to suit the needs of just about anybody. But the great quantum leaps, it seems, are in the past. Firearms released each year are mere refinements of previous designs, some decades old. That is simply putting things in a positive light. In my opinion, the 19th century was the greatest time period for quantum leaps in firearms’ history, going from smoothbore muskets to machine guns before the century was even out.

In the world of rifle development, one really only needs to remember one name — Mauser. Everyone knows about the famous Model 98 rifle carried by German troops in World War I and World War II, but the previous models have merit of their own and game changing features that made them futuristic in their own time.

Spanish Mauser M93 bolt action rifle in 7x57mm made in Spain by the Famas D’Armes in 1902. (Photo: Terril Herbert)

If there is any other Mauser that comes close to the M98 in recognition, it has to be the Spanish Model 1893. This weapon is famous in American historical circles as being the deadly rifle we faced in the Spanish-American War, a gun that made the US adopt new weaponry almost overnight. The M93 also had an illustrious career spanning struggles in the Philippine Insurrection to the chaotic Spanish Civil War of the 1930s. So what makes the m93?

What made it different?

The Model 1893 did not just come out of nowhere. Paul Mauser already had a military rifle under his belt, the M1871-84, but when the Germans made the switch to smokeless powder and a new rifle in 1888, Mauser wasn’t exactly consulted. So he went about developing a rifle that his native Germany simply would simply have to adopt. 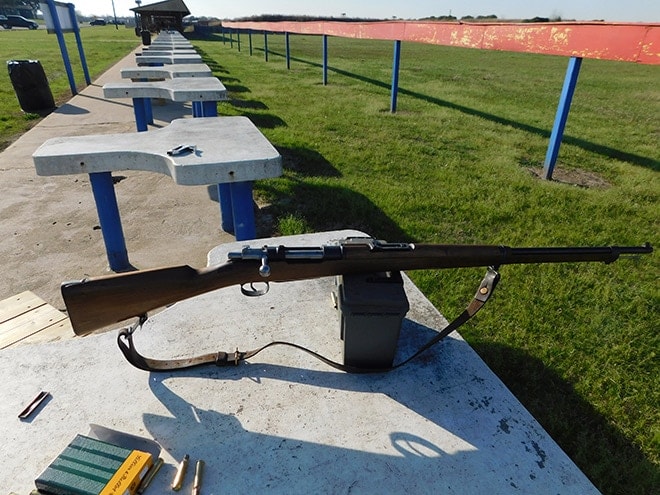 The Spanish M1893 rifle is slick to operate, but has a pike-like length to fend off horsemen with the bayonet. (Photo: Terril Herbert)

His new rifle, the M1889, had the same protruding magazine and metal barrel shroud of the Germans adopted Gew. 88, but it fed from a box magazine with a new rapid feeding system called the stripper clip. This rifle did not rely on the clip to control round feeding, which was done by spring-loaded tabs within the magazine.

The M1889 got the attention of the Belgians and the Argentinians, who adopted a simplified version in 1891. However, the protruding magazine proved vulnerable to damage and it became clear that the 7.65x53mm round the rifle fired could be improved upon. An upgraded rifle, the Model 1893, was immediately adopted by Spain.

This improved model incorporated a staggered box magazine, one of the first of its kind, that was flush with the stock. This improved handling, feeding and made the gun about as bulletproof as it could be. It was still a five-round bolt action rifle, but it now incorporated the new 7x57mm cartridge, a relatively small-bore, high velocity cartridge.

The first M1893s were made in Germany, but domestic production soon caught on and would continue through the 1940s. 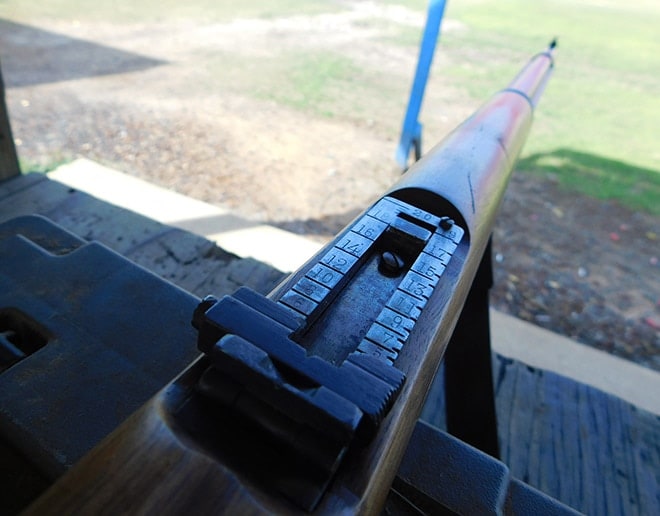 That 2000 meter setting on the ladder rear sight seems optimistic, but was meant for volley fire to harass enemy formations. (Photo: Terril Herbert)

The M93 is a contradiction of high technology and old-world thinking. The rifle has the same hearty steel furniture and wooden stock as any other rifle the day. The sights, consisting of a rear 300 meter battle sight and a ladder ranging out to 2000 meters and a front blade, are not terribly impressive. The rifle is quite long, sporting a twenty-nine inch barrel, for fencing with the enemy and repelling enemy cavalry with the bayonet.

What makes the rifle modern is the action. The rifle is a magazine fed, bolt action rifle that has a straight bolt handle, handy for slapping out swelled cases. The bolt is idiot proof with a three position flag safety at the rear and two opposed locking lugs at the front with an oversized claw extractor riding at the side. The magazine, when empty, allows the follower to come up, keeping you from bolting forward on an empty chamber. You can load in loose ammunition or strip rounds into the five-shot magazine by inserting a clip of ammunition into the raised bridge and thumbing the rounds down. 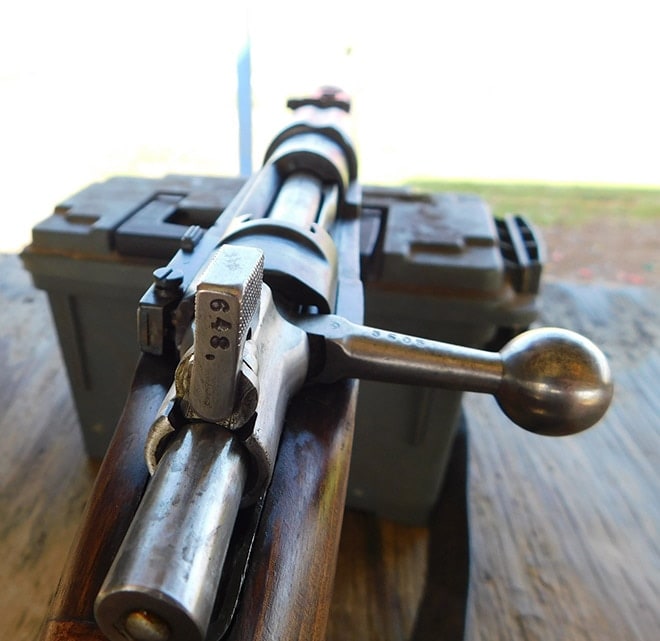 The only safety on the rifle is the three position flag as seen on all Mausers. (Photo: Terril Herbert)

Speaking of ammunition, the M93 fires the 7×57 or 7mm Mauser cartridge. This round is still very much alive and well today as a sporting cartridge in both old war horses and newly made rifles. For it’s time, it had a flat trajectory, yet boasted mild recoil with a 173 grain bullet going out around 2300 fps.

My particular rifle, made in Spain by the Famas D’Armes in 1902, is in great shape for being 115 years young with only some minor scuffs and bore wear.  In my experience, finding the right load for this particular rifle was troublesome. Hundred and forty grain ammunition proved hopelessly imprecise at even a close distance of fifty yards. It is worth noting that the M93 long rifles are regulated to shoot 173 grain ammunition and I found that some of Sellier & Bellot’s 173 grain spire-points are up to the job. 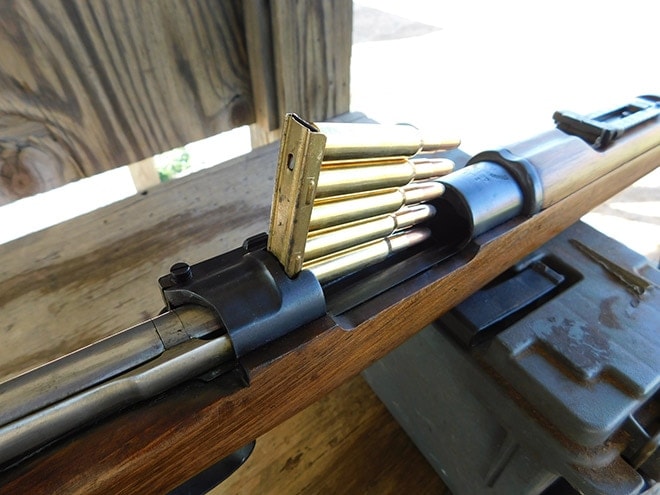 Loading the rifle is cake. Feeding the rifle with clips or with individual rounds is an easy proposition with the judicious use of your thumb. However, the use of clips is not as streamlined as later models — the M93’s receiver is not milled out for a thumb, so you have to stick your thumb down into the magazine to strip all the rounds off. Just slam the bolt and the clip falls free of the action. You can have your rifle loaded and ready to fire in just a few seconds.

Sitting behind the M93 is a lot like pointing a spear. The rifle is quite long with very fine attributes that I cannot connect to the stubby carbines that later took its place. As mentioned, the sights are nothing to write home about. Since, I wasn’t firing to break up a cavalry formation on the horizon, I left the ladder rear sight down to the very low 300 meter battle-sight. 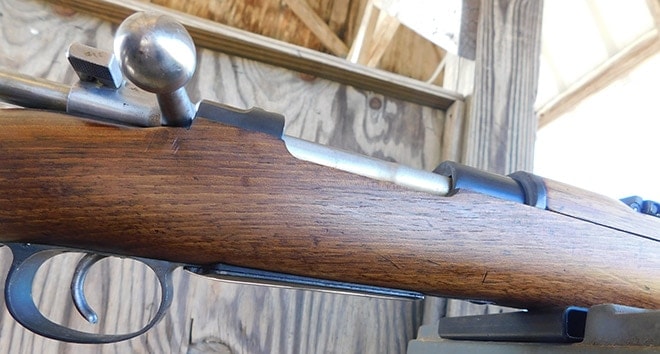 Firing the rifle is a pleasant experience. The 7x57mm round is relatively light in recoil and the M93 comes in close to nine-pounds in weight. When you squeeze out the take-up and let off that clean break from the two-stage trigger, the rifle will give you a gentle push—hardly enough to disrupt your sight picture. After about sixty rounds though, my shoulder did get sore.

Cycling is a bit of a story. The old war horse has never malfunctioned in any manner, but the cock-on-close action of these pre-98 Mausers is an experience. It takes a little more force to pull the bolt to the rear once unlocked to extract the case as the bolt does not cam out of the action but goes straight up. Work the bolt smartly and the case comes flying out and push the bolt briskly forward against the spring pressure to seat a new round and cock the striker. 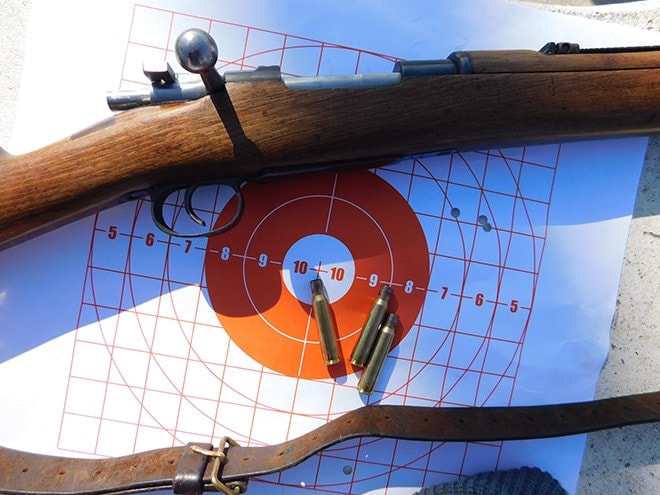 Though high and to the left, the M93 still delivers 1.2 inches at 100 yards, nothing to sneeze at, even with a modern scoped rifle. (Photo: Terril Herbert)

This action is theoretically faster than the later Mausers that cock when the action is closed, but is also theoretically not as safe.  The later Model 98 has gas vents and a third safety lug to vent gas away from the shooter’s face in case of a ruptured case. It has a much beefier receiver ring as well, so the M93 and the later M1916 is considered somewhat weaker in the extreme.

Needless to say, I wasn’t too concerned about the integrity of the M93. Sixty rounds down-range finally made my shoulder retire for the day and I came out with a newfound respect for the M93. Can you say one inch at 100 yards? This old beast can with the 173 grain ammunition. The 140s could barely hold a foot sized group, however. Like all military rifles of the era, that 300 yard battle sight will make the rounds strike high, but in the case of the 7mm, that is only of a few inches. At 300 yards, the rounds were hitting dead on in a six-inch pattern with a steady rest. That is with those terrible iron sights.

Today, M93s are still out there at $300 and up. The 7x57mm round can still be found with regularity both online and in large gun stores, but it won’t be a big box store best-selling item. In my shooting of the M93 Spanish Mauser, I found it to be like other early Mausers — a rifle of contradictions.  A truly innovative rifle sporting the very best technology in design, metallurgy, and ammunition, yet having a ridiculous length with Old World Craftsmanship written all over it. Outdated, yet romantic notions of fencing with the enemy one on one and repelling cavalry charges using line formations clashed with the ability to pour lead down-range quickly and accurately in a very modern context where no-one was safe.