A double-barreled pump shotgun? Yes, you read that correctly.  Two barrels and two magazine tubes with a 16 round total capacity.  The gun of your wildest dreams?  Not anymore. It’s the DP-12.  Is this the hottest shotgun on the market or is it just another impractical bullpup?  Let’s find out. 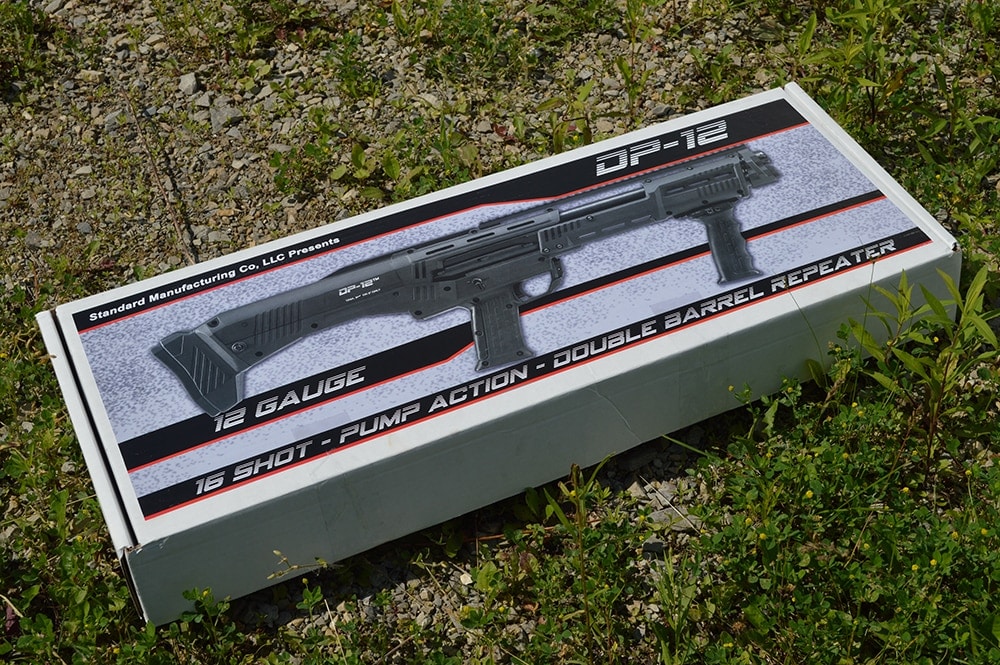 The gun comes in a plain cardboard box, but what’s inside is anything but ordinary. The Standard Manufacturing Company’s patented DP-12 is the only double-barreled slide-action shotgun on the market. The innovative DP-12 is a 12 gauge shotgun that weighs in over nine pounds empty and is built like a tank. 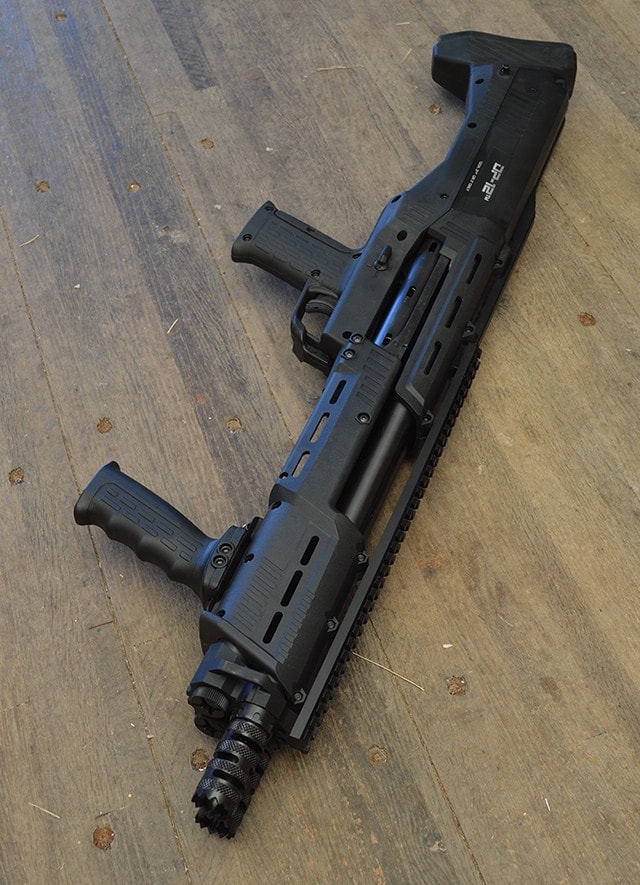 Outwardly, the DP-12 is instantly reminiscent of Kel-Tec KSG or the lesser known UTAS-15 (of the even lesser known NeoStead)  Upon further inspection, however, the DP-12 is its own animal entirely.  The two barrels immediately set it apart from the competition.  Rather than offset feeding, the DP-12 feeds entirely inline. The gun is capable of chambering 2-3/4” and 3” shells, and its 16-round capacity is quite incredible. This is not a polymer piecemeal weapon. The DP-12 is built from one solid block of 7075 aircraft grade aluminum. Barrels are 18-7/8” and are machined from bars of 41-30 steel.

In attention to detail, the DP-12 wears a full-length picatinny top rail, a lower rail, and both sides of the slide mechanism feature slots for the attachment of Magpul-type MOE accessories. What looks like an awkward buttpad area is actually a spring loaded recoil mechanism.  Both the AR-style safety and the slide release are ambidextrous and easy to reach.  Sling swivels are present in the expected locations, and there’s also a wide front sling attachment. 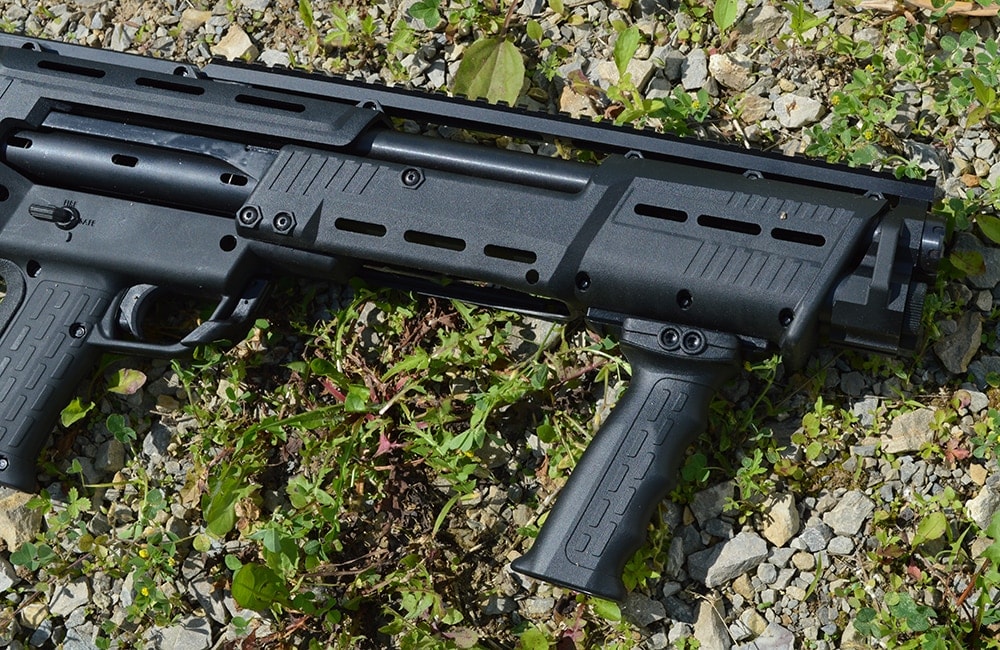 The DP-12 ships with two flush-mount spreader choke tubes with Tru-Choke thread patterns.  Though not standard, we also tested the extended, door-breaching spreader chokes, which are available for $45 each.  The DP-12 moniker comes simply from D-double, P-pump, 12-gauge. Love it or hate it, the stock wears a QR code users can scan with either a smartphone or tablet to view the manual and other information. 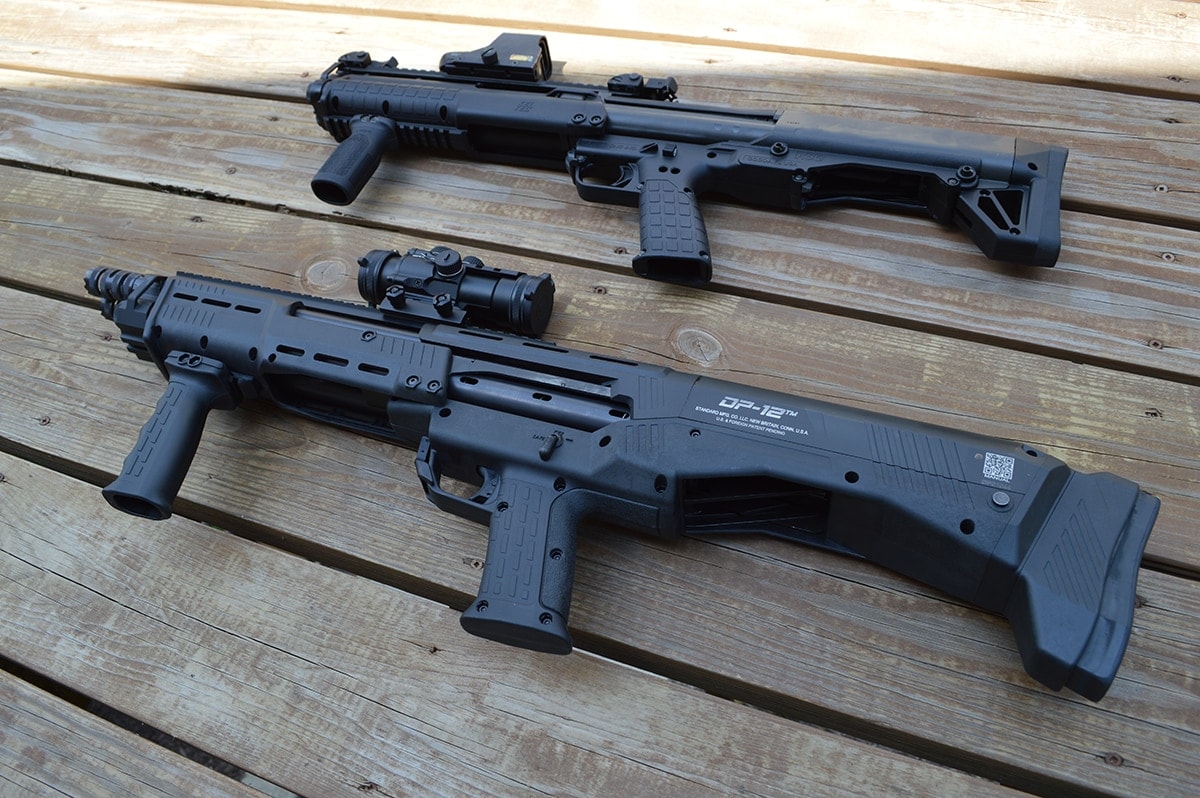 The response from people we’ve met on the range who are encountering the DP-12 for the first time has been the same.  “Oh, so that’s like that Kel Tec.” When I say no, indicate the two barrels, and let them handle the gun, the response is as follows: “What the ?” then “That’s cool!” and finally “Who makes that?”

This gun is one heavy beast when fully loaded. With all 16 rounds on board, we weighed the gun just over ten pounds.  For such a hulk, it’s surprisingly well balanced.  We tested the DP-12 with flip up irons, a plain ‘ol holographic sight, and finally mounted the Vortex Spitfire 3X optic.  Target acquisition on a gun like this should be quick and easy, and all our sight choices allowed that. 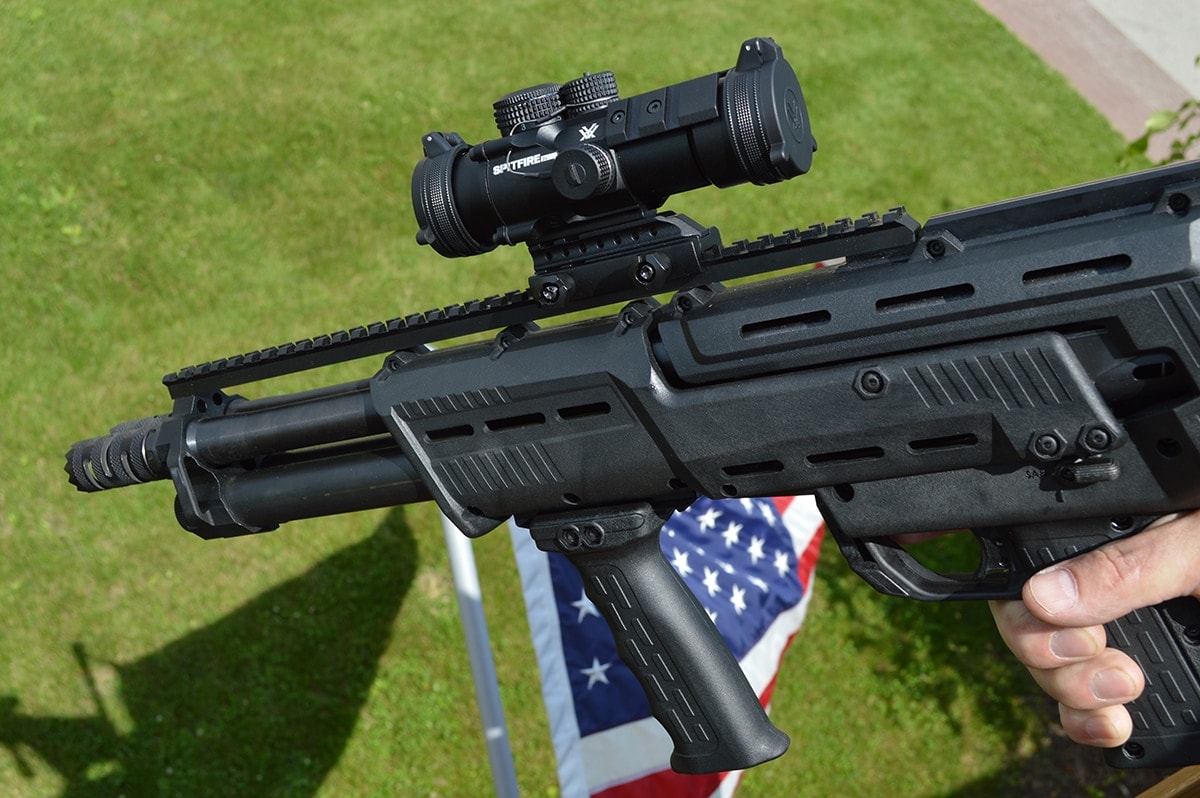 We shot reloads and factory, high and low brass, light target and heavy hunting loads and the gun just gobbles and spits.  One of the major benefits of a double-barreled pump became evident with a dud shell’s failure to fire.  Rather than wasting time troubleshooting or cycling the action, the operator simply pulls the trigger again.  Though that’s minor on the range, it’s a major benefit in defensive situations.

Between the sheer weight of the gun and the spring loaded recoil system, what I expected to be a brutal recoiling shot pump action is actually incredibly manageable.  Barrel rise is negligible and the barrels stay on target well.  Empties eject with significant force out the lower buttstock area of the weapon, but such action does not impede shootability in any way. The dual magazine tubes are quick and easy to load, two at a time. There’s plenty of mounting room on the gun, with a 34 slot picatinny rail on top, a seven slot on the underside of the handguard, and plenty of MOE rail slots. 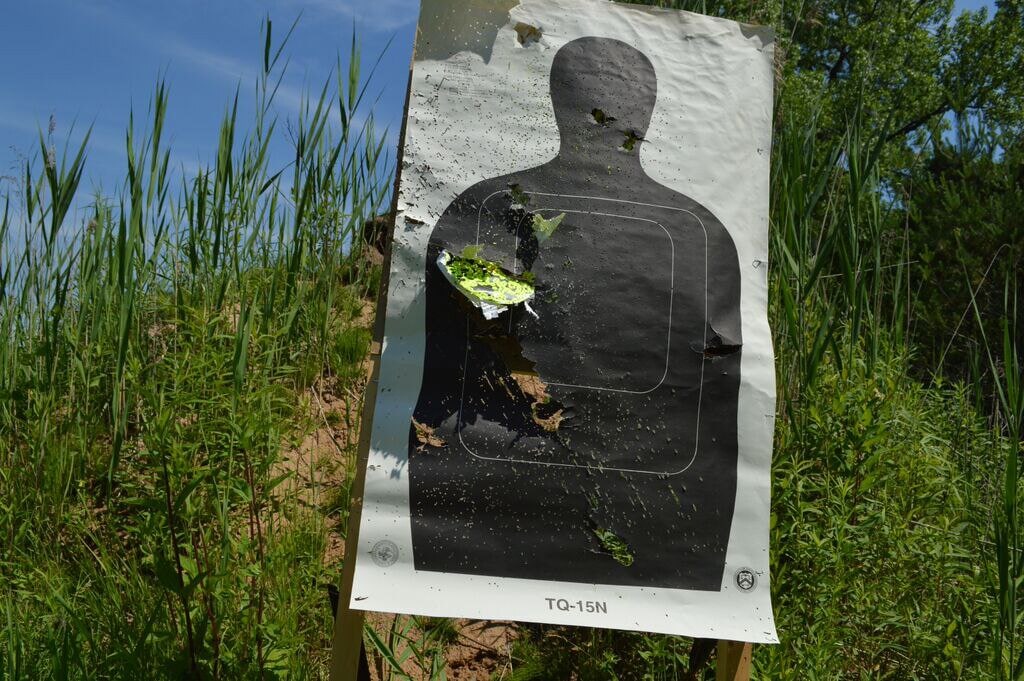 At the patterning board, both the flush and extended spreader chokes show very similar patterns. Designed to shoot devastating patterns at 25 yards, we tested patterns at ranges from ten to 30 yards.  Inside of 15 yards, standard target loads with  #7.5 or #8 shot blows holes in the board with plenty of collateral fliers.  At 20-30 yards, patterns are indeed more even and devastating.  Though it remains up for debate whether one needs to change chokes on a bullpup shotgun, the interchangeable chokes are nice, and the extended breachers really up the ante in tacticool-factor.

Price holds the DP-12 back at $1395 retail, and real-world prices are not yet much different, based solely on supply and demand.   Regardless, you get what you pay for with this shorty.  It is stout and strong, and we did not experience so much as a hiccup in function with the inline feed system. The only question mark is what the company calls a “thermal coated receiver.”  While the finish looks and feels great, only time will tell how it wears.  All I can say is with a month of fairly heavy use and several cleanings, the gun still looks like new.  Research into the manufacture of the DP-12 show the gun to be built with no spared expense, testing, or research, as evidenced by this virtual tour, which I’d encourage potential buyers to watch. 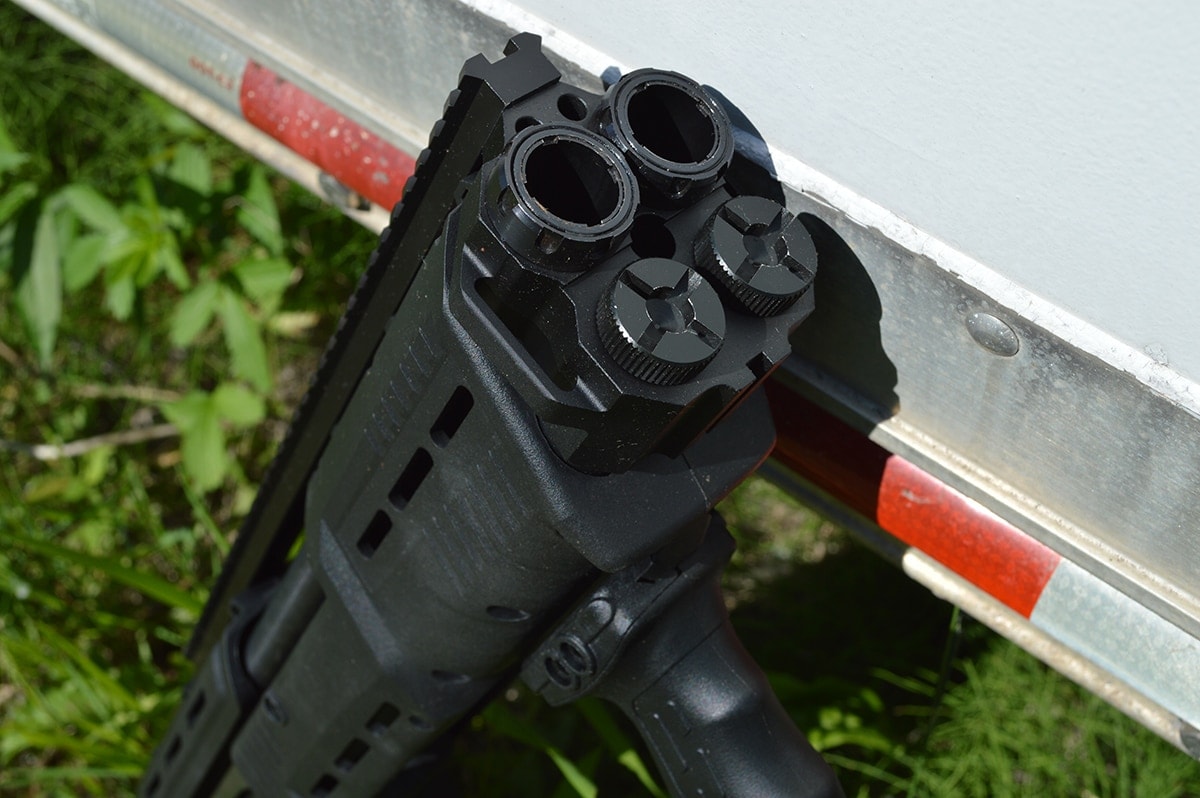 My initial reaction to hearing about the DP-12’s inception was that it would be nothing more than a gimmick.  However, after doing some research and spending serious time with the gun, two clear-cut reasons make this far superior to single-barrel bullpup designs.  First, two shots is better than one.  With one stroke of the pump, you get two shots.  If one round malfunctions, you have another without working the action.  Follow up shots can be paramount in self defense situations.  Secondly, even a lightly-trained newbie should be able to fire off the full 16 rounds in under 8 seconds. It’s boom, boom, rack the slide, boom boom.  The company’s reps are quick to state that the DP-12 is twice as fast as the Kel Tec KSG.   That’s fast fire.  More experienced users make emptying this gun sound like machine gun fire.

The DP-12 is the buzz of the shooting community right now.  While there seems to be more demand than supply, the DP-12 is nonetheless available on the open market.  While it was initially marketed as a Cheaper Than Dirt exclusive, I’m very pleased to announce that’s no longer the case.  While I won’t dig into the details of my distaste for CTD’s selling tactics, the fact that the DP-12 is now available from the major distributors greatly expands its market.

The best proof of a guns’s worth that I can offer is this.  Though I’ve blasted away with the KSG and handled plenty of them, I’m not generally a fan of bullpup designs, and don’t feel an overwhelming need for anything considered “tacticool” in my arsenal.  However, after spending significant range time with the DP-12, I can honestly say I hate to return this gun.  It’s a star on the range and I’d keep it in the corner by my bed.  What drives popularity of pump action shotguns to this day is the simplicity and pure reliability of a mechanically operated action, and while the DP-12 seems complicated at first glance, it may well be the most well-built and reliable shotgun on the market.  While the cost and initial availability may be a setback, if the extreme firepower of this defense/assault shotgun trips your trigger, the DP-12 will be worth your wait.