What kind of firearm can you buy brand-spankin’ new for less than $300 out the door?  You can count them on one hand, and I’m not sure how many are worth their weight in pennies.  But now there’s a new shotgun promising to be the place “where performance and value converge” in a workhorse pump.  Enter the P3000 from Stoeger. 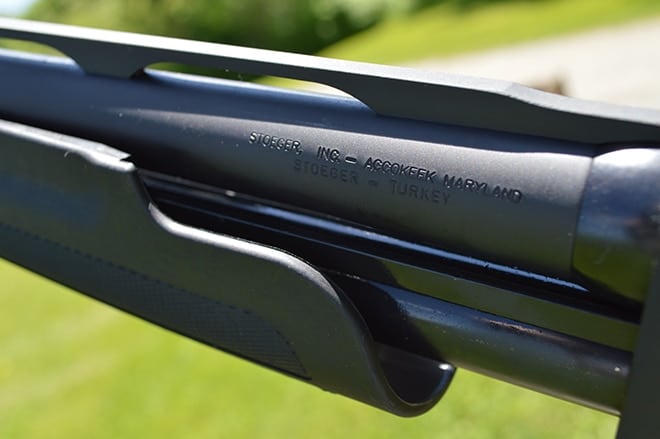 While the Stoeger brand has never been considered anywhere near the upper-echelon of firearms manufacturers, they have made everyday guns for everyday folks who don’t want to break the bank.  What’s more, Stoeger is under the same ownership and manufacture as Benelli, and shares more than a few parts and designs in common.  Parent company Beretta Holdings owns, of course, Beretta USA and Benelli, but also Stoeger, Franchi, Sako, Tikka, Uberti, and Burris Optics.  While Stoeger’s headquarters and service department is in Pocomoke, Maryland, our test gun was built in Turkey. 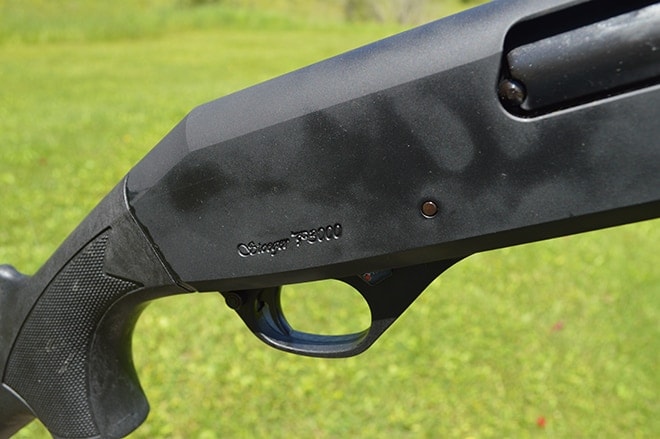 The Stoeger P3000 is all about simplicity. The pump shotgun comes in only one configuration, black synthetic 12-gauge, 2-3/4” and 3.”  The ventilated-rib barrel is 28” with a red fiber-optic front sight and comes with one interchangeable Modified choke and a wrench. At 6.9 pounds empty, the P3000’s core is a machined anodized receiver and holds 4+1 rounds. 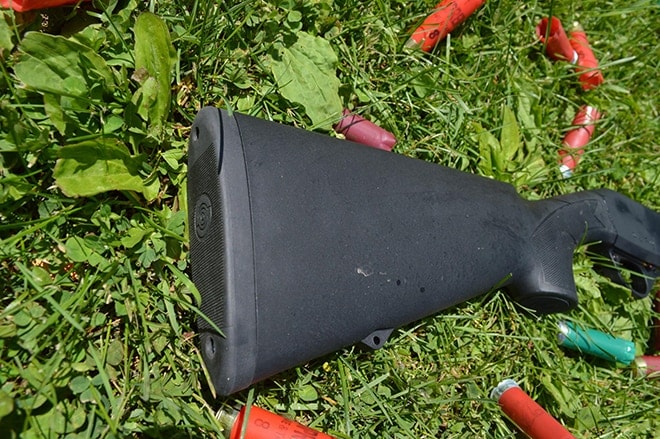 The P3000 comes with a 5-year warranty, so we know that no matter how hard hunters pound on this gun, it is guaranteed for at least that long.  With an MSRP of $299 and real world prices as low as $250, price is what sets the P3000 apart. 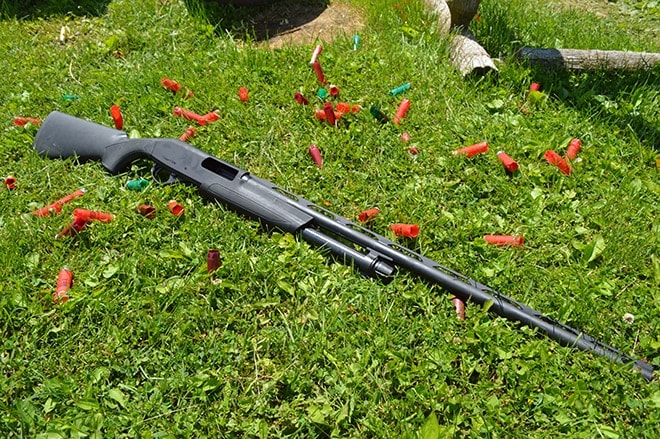 Even though the price is darn appealing, the gun still has to earn its keep. So we took the Stoeger P3000 to our favorite swampy hunting spots, got it wet, shot it, got it muddy, shot it, sprayed it off, ran it dry, and ran it oily.  We shot 2-3/4” light loads for sporting clays, 3” pheasant loads, and hard-hitting Hyper Velocity 3” goose loads.  It performed.

Though we ran over 500 rounds through the gun, we haven’t spent enough time with it to know how it will hold up in 1,000 rounds or 10,000 rounds. Will certain parts wear prematurely?  Only time will tell. 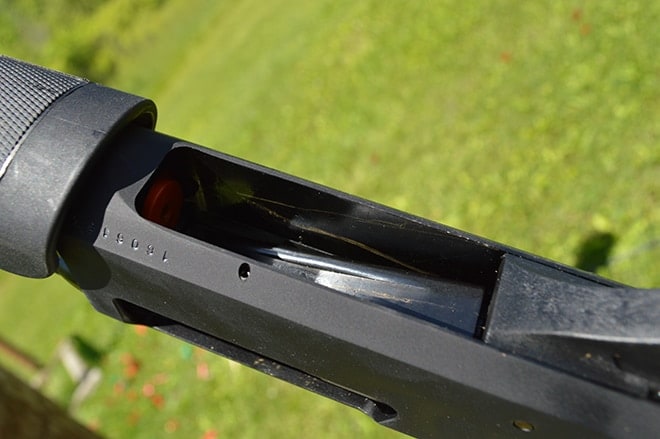 We did begin to see a few drag marks inside the receiver where shells are pulled from the mag tube before feeding.  There were also some unsightly, albeit minor rub marks on the outside of the receiver from the forend.  Both of these were cosmetic flaws and should not affect function.  For less than $300, that’s a gamble worth taking for the potential of a do-all scattergun. 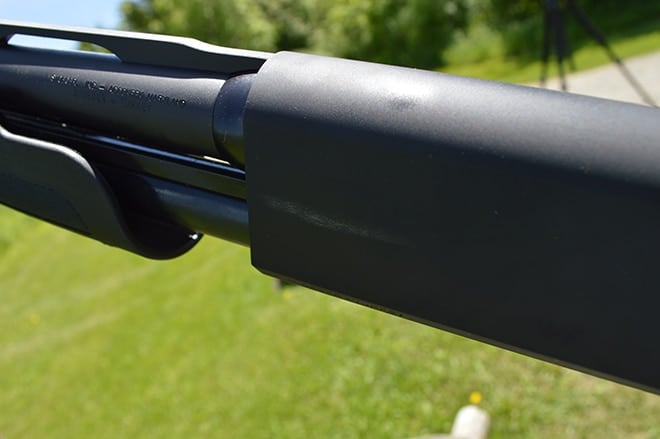 Naturally, there are bound to be some knocks against a sub-$300 gun.  So here they are:

The P3000 comes with only one choke. Of course, that’s better than a fixed choke, and if you have to save money somewhere, buyers can pick up additional Beretta/Benelli style chokes as free cash allows.  The gun is chambered for 2-3/4 and 3” only, in the days of a 3.5 Magnum craze. 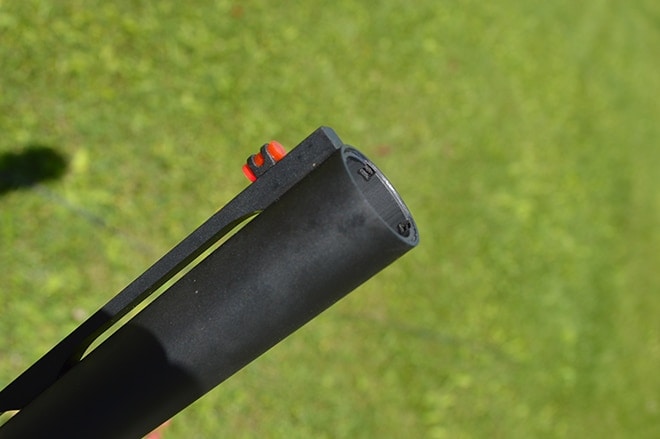 That’s perhaps a blessing and a curse, as innovations in 3” ammunition all but negate the need for the increased recoil of the 3.5” with but a slight drop off in performance. Lastly, the gun only comes in black synthetic; if you want camo, you’ll have to get it hydro-dipped or do a home-job. 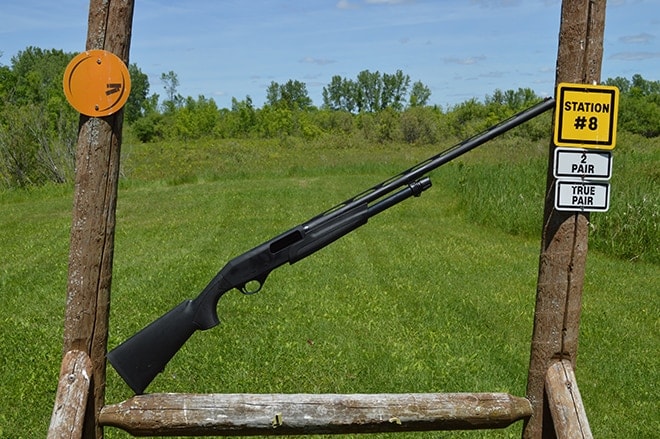 This is an ideal, low-budget pump for casual shooters, hunters, first-time gun owners, or even as a backup gun.  For those who want a single shotgun to do all the jobs at a 1960s price, the P3000 can hunt upland birds, shoot clays, waterfowl hunt, or even protect the home.  Make no mistake–this is not a gun to be left in the safe; rather, it’s a shooter, a beater, a bargain shotgun.  I can’t imagine this is one to pass down for five generations, but it would be hard not to get your money’s worth of fun out of it.  Sure, there are better guns at higher prices but the Stoeger P3000 may well be the lowest price, do-all pump shotgun on the market.