Last month, I featured the Glock 19 in a piece I lovingly dedicated to lady shooters. Not sure how it would be taken, I was surprised to find that our readership seemed to enjoy a girl’s take on the G19; so I’m back with my womanly perspective on another handgun.

This time, we’re downsizing to a subcompact with a wide fan base. I’m talking about none other than the Smith & Wesson M&P Shield chambered in 9mm.

The Shield is a no muss, no fuss striker fired subcompact. Featuring a barrel length of 3.1 inches, the Shield boasts an overall length of just 6.1 inches. The stainless steel barrel is finished with Armornite and sits atop a matte black polymer frame. The intersection of polymer frame and stainless steel slide equates to a lightweight handgun, weighing just over 20 ounces. 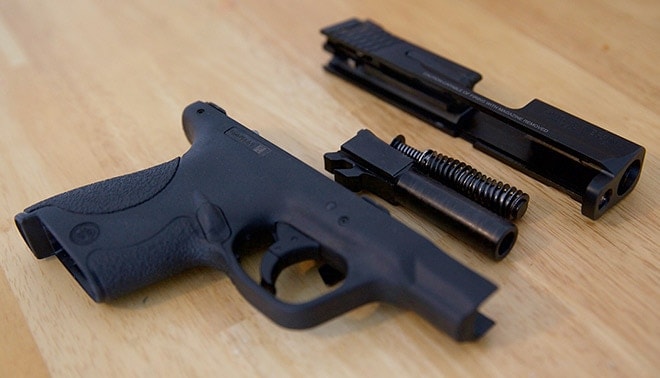 You won’t find any fancy features on the Shield — it touts a stripped down, simple design. The slide is clutter-free, outfitted with standard white dot sights and rear serrations. The slide stop/release and mag release sit on the right side, positioned for one-handed operation. Though the slide stop/release is situated near perfectly for my tiny hand to reach, it isn’t the easiest to engage. Nine times out of ten it took two thumbs to release the slide instead of one. For this reason, I opted to release the slide by slinging it back and releasing. 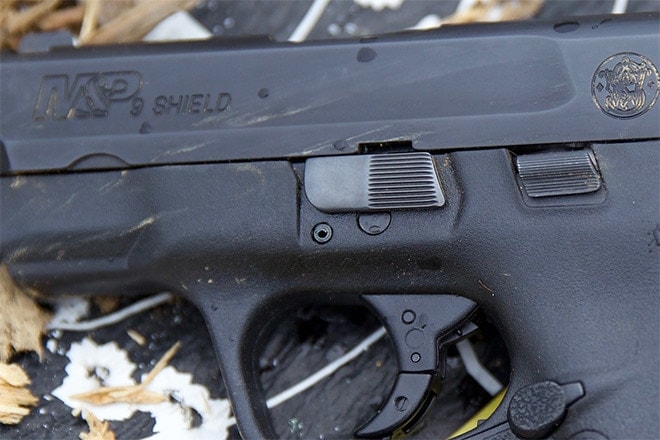 Though intended to make releasing the slide easier, the slide release/stop is a little tough on the 9mm requiring two fingers to operate. (Photo: Jacki Billings)

The 9mm Shield ships with two magazines, providing 7+1 and 8+1 capacity. Out of the two mag options, I preferred the extended eight round mag. Not only did I score more rounds out of it, but it was the easiest to load with the least amount of resistance. (A plus as I currently load my mags by hand and without the help of a mag loader.) Though the eight rounder was the most comfortable to load, it’s spacer frequently climbed the metal mag. I found myself constantly pushing it back down to the base. At its worst, it was a minor nuisance. 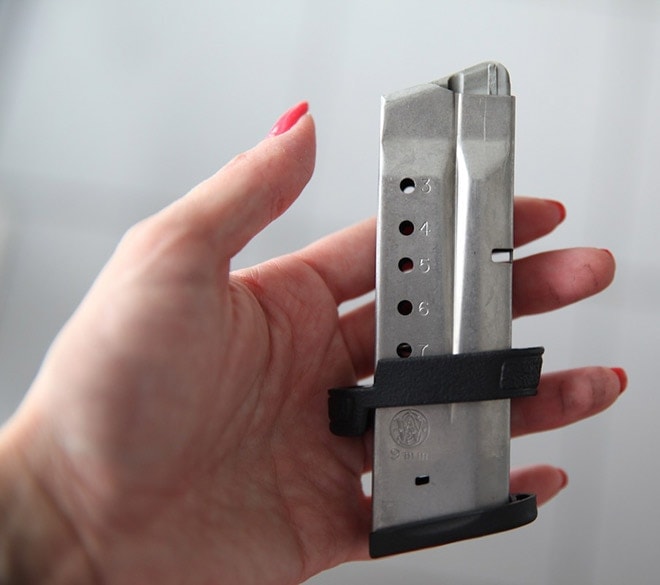 The spacer rides up the extended mag… (Photo: Jacki Billings) 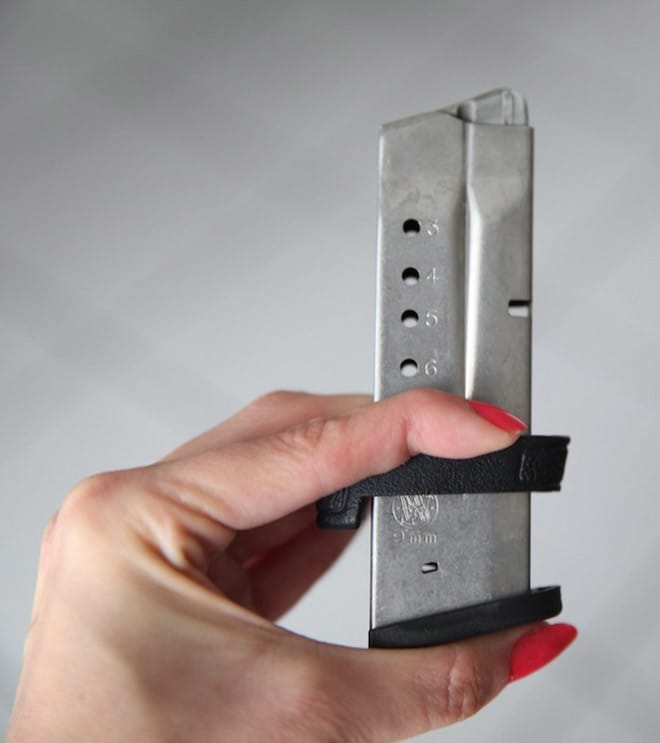 …but is easily pushed back into place. (Photo: Jacki Billings)

If we’re being honest, the Shield is my go-to gun when I’m in an outfit that doesn’t allow for the double-stacked Glock 19 or Springfield Mod.2. It’s low-profile design easily slips into a holster for deep concealment either behind-the-hip or appendix inside-the-waistband. Perfect for days when I’m sporting a tighter t-shirt, skirt or even a dress that requires a smaller gun, the Shield affords me the ability to dress up girly without sacrificing the safety of a carry gun. 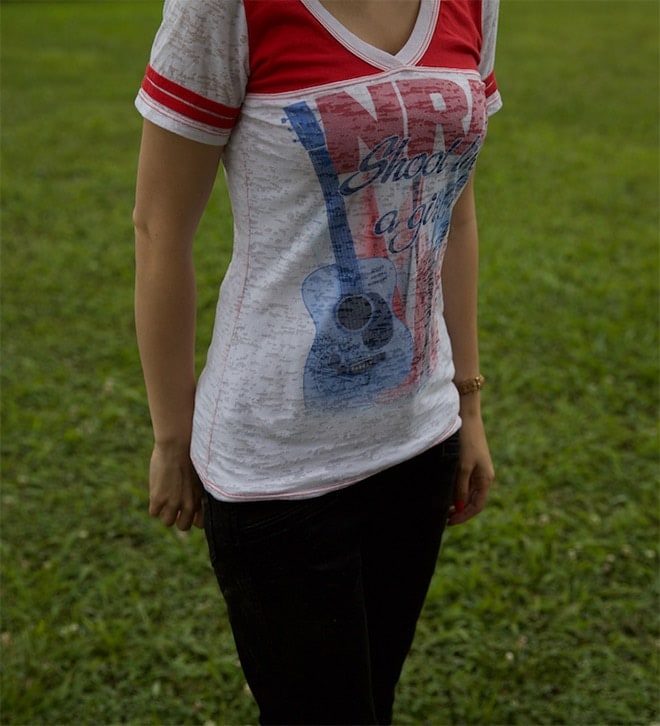 The author concealing behind the hip and AIWB with the Can Can Hip Hugger. (Photo: Jacki Billings)

For the purpose of this review I carried the Shield in Can Can Concealment’s Hip Hugger. The Hip Hugger is a belly band style holster specifically made with ladies in mind. With both a behind the hip holster pocket and AIWB pocket, the Can Can was the best option to test concealability with this platform. 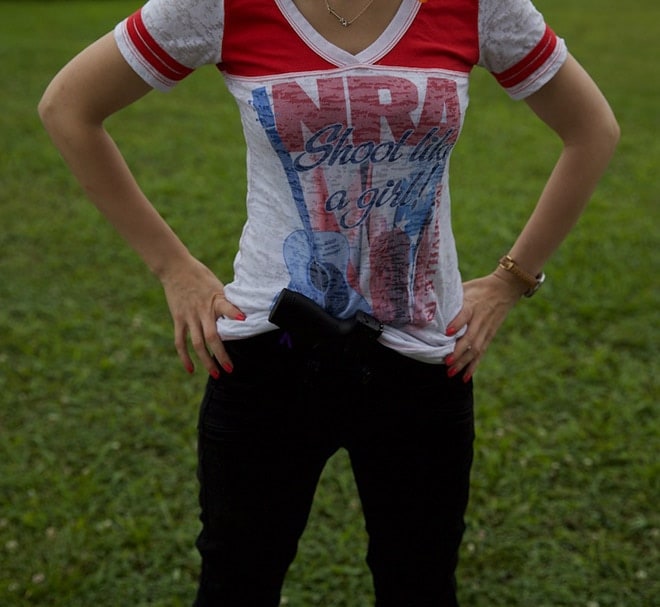 Nestled in the rear IWB pocket, the Shield accompanied during errands around town, jumping around the playground with my kids and on the range. The Can Can and Shield combo allowed me to wear lighter clothes perfect for the hot summer days us Tennesseans are accustomed to. 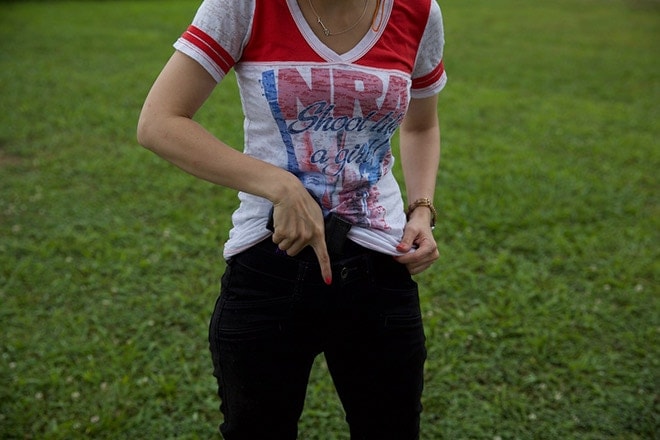 Unlike the Glock 43, which I found difficult to draw due to its ridiculously small size, the Shield’s petite frame is adequately sized so that it doesn’t occlude drawing. The grip’s width is enough to grasp firmly while not impacting concealment. 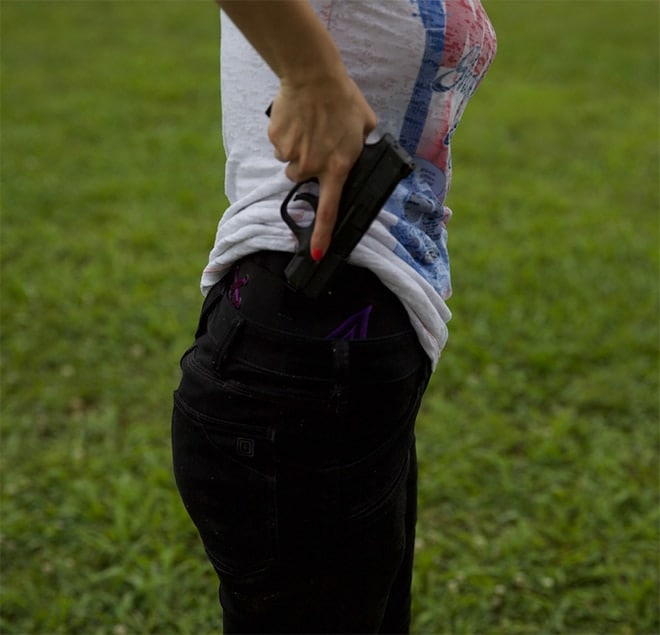 The Shield draws well and doesn’t snag clothes on its way to presentation. (Photo: Jacki Billings)

I spent two months with the Shield, putting her through her paces on the range. And, boy, is she a feisty one. That compact size that’s perfect for concealment can make for some snappy recoil on the range. 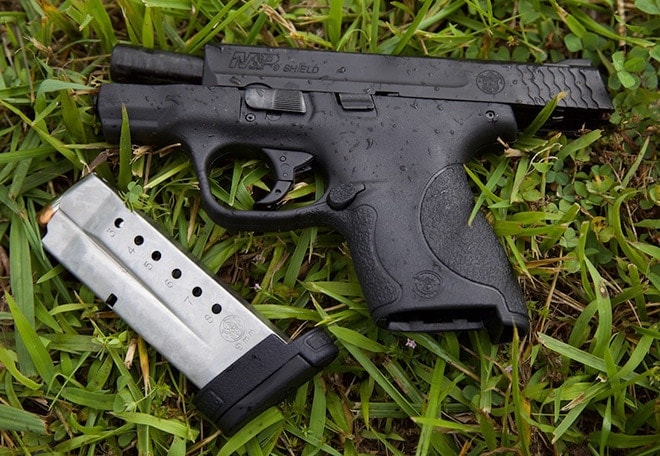 The Shield boasts a durable design that can withstand a little water and mud. (Photo: Jacki Billings)

Newer shooters looking at the Shield as a viable option would be prudent to consider that a 9mm round in such a small gun will cause some movement. Though completely manageable with solid pistol handling and a firm understanding of the fundamentals, ladies tip-toeing into the gun arena shouldn’t be fooled by the gun’s diminutive size. Although it appears cute and unassuming, it offers a little more pop than you might expect. 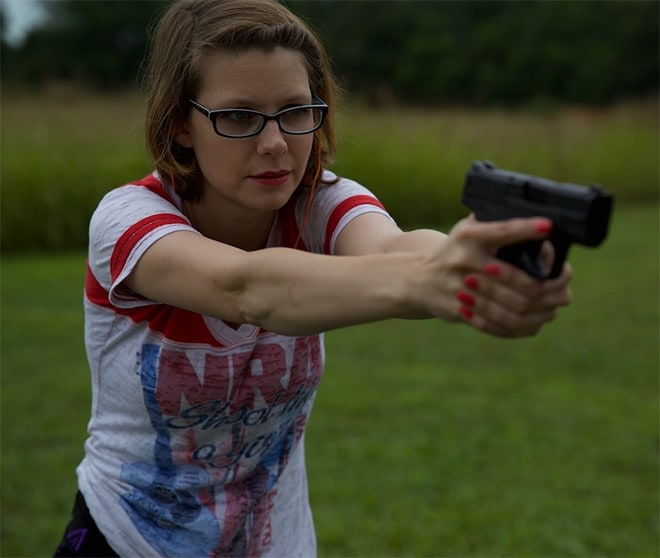 Though recoil might rack new shooters, those accustomed to a little pop will find the gun manageable. (Photo: Jacki Billings)

The gun’s white dot sight set-up offers some decent visibility despite sticking to the basics. The white dots are bright and contrast nicely against the surrounding black. Though a nice set of luminescent sights work better for low light shooting, I didn’t find the Smith & Wesson’s sights to be terrible, especially since I did most of my shooting during daylight hours. 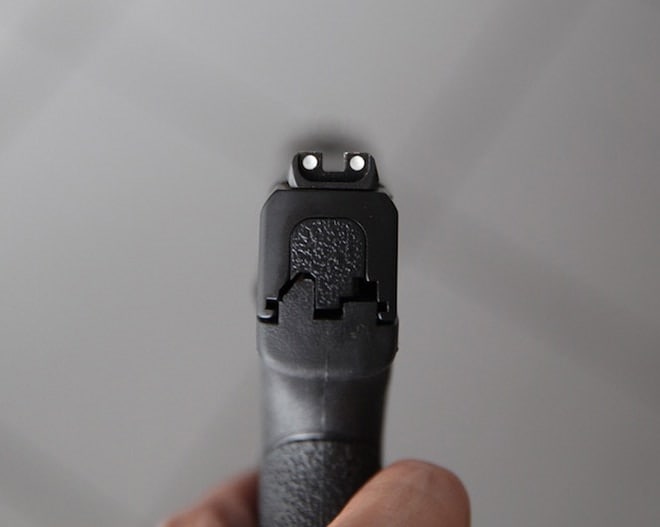 The sights proved accurate on the 9mm Shield model. Shooting at 5 yards, 10 yard and 15 yards the Shield proved to be near dead on with any deviations being on the shooter and not the pistol itself. The Shield also held up to host of ammunition. From white box Winchester to Sig Sauer’s V-Crown, the Shield happily launched bullets down range with no hang-ups. Mag after mag, the handgun performed flawlessly, punching holes in paper targets and making steel targets sing with satisfaction. 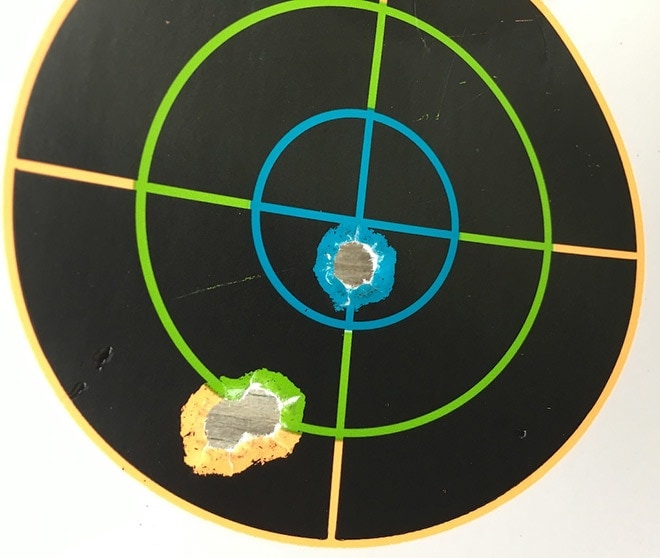 One aspect that won’t have shooters necessarily singing with joy is the Shield’s mushy trigger. I prefer a crisp, responsive trigger and the Shield underperforms in that aspect. Though not the worst trigger on the market its soupiness is a tad underwhelming. 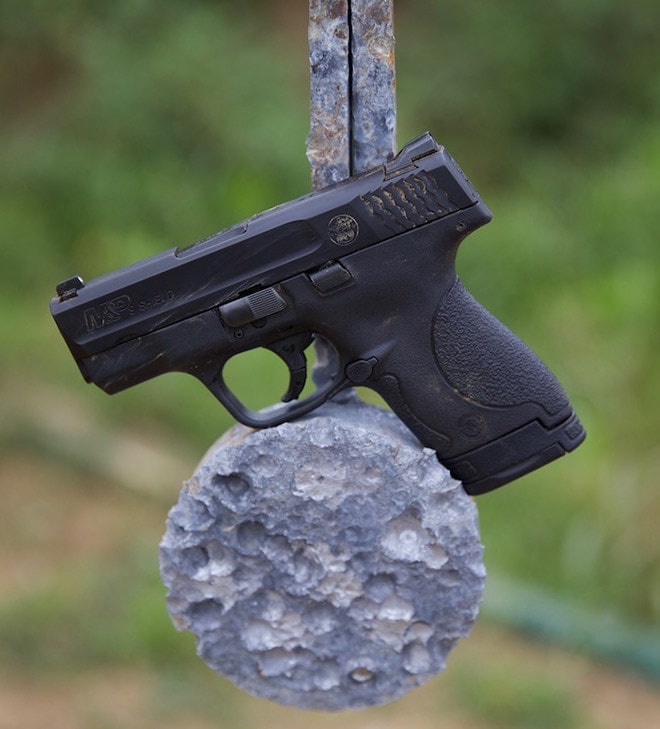 The Smith & Wesson Shield may be little but it packs a punch, easily pinging steel targets down range. (Photo: Jacki Billings)

Simmer down, we’re not actually debating the merits of the rounds themselves.

Smith & Wesson introduced the Shield in .45 in 2016, offering an updated take on the 9mm version. Since the .45’s release, some lady shooters have wondered what each offers and ultimately which caliber Shield is worth the cash? 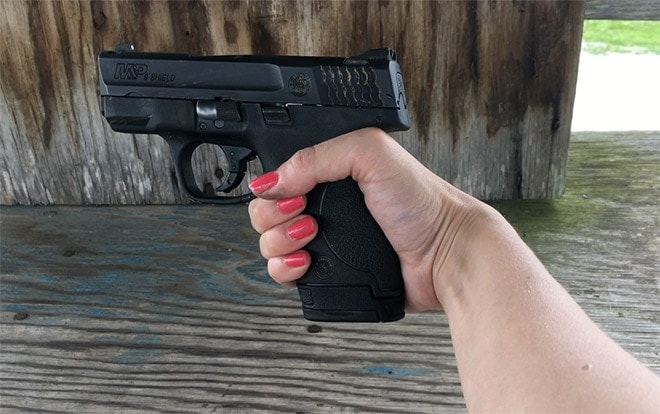 The two guns are largely the same, both offering a similar look and feel. Though the .45 packs larger rounds, it manages to keep its overall frame to a manageable size; however, the trade-off comes in the grip styles. Though Smith & Wesson boasted the .45 ACP’s advanced grip surface, the 9mm version’s grip is so much more comfortable to shoot. I could easily spend all day at the range, plinking at targets with the 9mm. An hour or two with the .45 ACP and my hands are shredded from the grooves roughly attacking my palms. 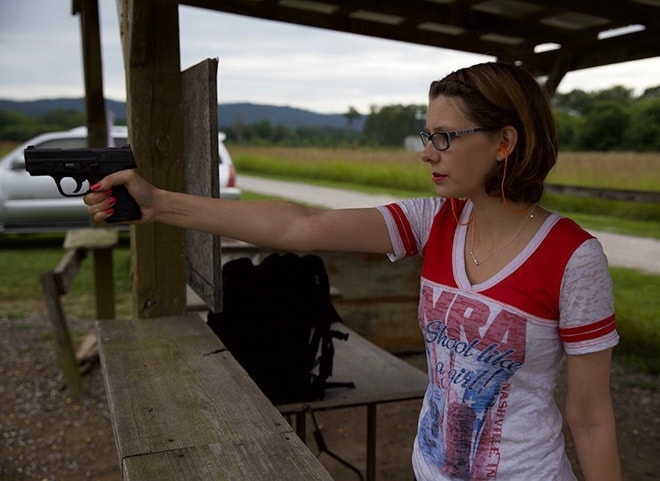 The author working on one handed manipulations and shooting. (Photo: Jacki Billings)

Additionally, the .45 serves up a hell of a lot more recoil. While experienced shooters who are comfortable with that round will have no issues, new shooters will find the .45 a beast to manage on such a small platform.

Ultimately it comes down to this – if you’re new to shooting or just getting into the concealed carry game stick with the 9mm Shield. 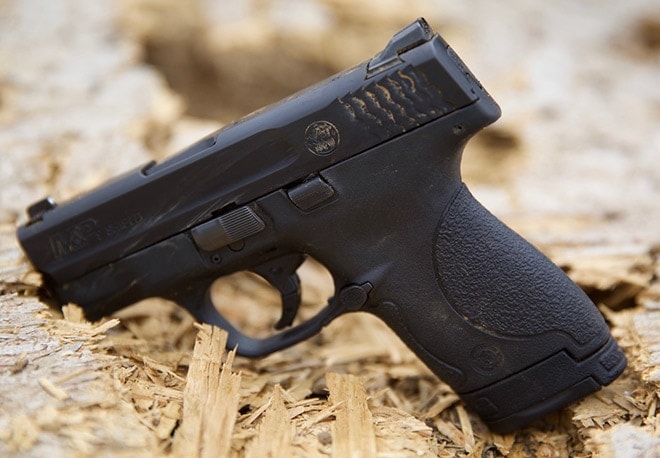 At a modest price of $449 and petite but substantial frame, the 9mm shield is a definite choice for female shooters. (Photo: Jacki Billings)

Its slim, lightweight design paired with the power-packing 9mm chambering has cemented the Shield as one of Smith & Wesson’s most popular subcompact models. Boasting ergonomics that work well in petite hands and reliability that shooters can count on in a pinch, the Shield is well worth its $449 price tag.