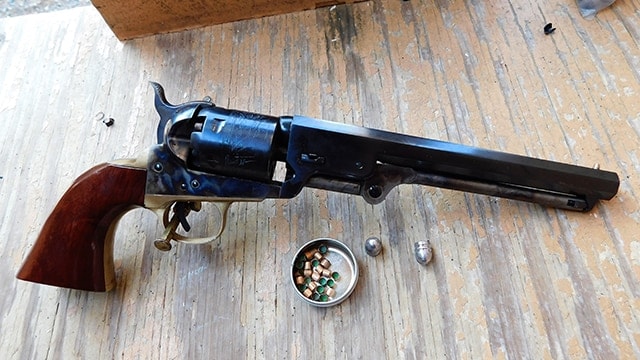 In my Top 5 Percussion Revolvers, I listed the Colt 1851 Navy on top of that rather subjective list. Percussion revolvers and millennials don’t usually go together, but in my case I have owned and shot Colt Navy pistols more frequently than any other handgun. The 1851 Navy is a bit different to load by today’s standards, her shooting characteristics and various historical footnotes are worthy of attention.

Colt released his “Belt Pistol of Naval Caliber” in 1850 as a means of creating a pistol that was light enough to carry on a belt, unlike the large .44 caliber Army horse pistols in inventory like the Colt’s Walker and Dragoon. It was also to be more powerful than the pocket .31 caliber pistols that began to take off in popularity at the time. The Colt Navy uses a .36 caliber bore, then in use with the US Navy, and stuck it in a pistol that weighted just 2.5 pounds. Over two hundred thousand were produced and the pistol was a mainstay of both sides of the American Civil War. It also saw adoption by Britain, Prussia, and others—making it one of the first internationally adopted military handguns.

The 1851 Navy is probably most famous as a preferred weapon of Western lawmen and outlaws like Wild Bill Hickok and Jesse James. It’s worth noting that the Navy’s grip frame was later used on the Colt 1873 Peacemaker.

Today, Pietta and Uberti of Italy are making 1851 Navy replicas that are both true to the original, yet made of modern, durable steel. Most of my trigger time has been with a few Pietta-made handguns and the experiences have been good, but after a brief spell without a Navy pistol, I ended up with Uberti’s version from Taylors & Company. 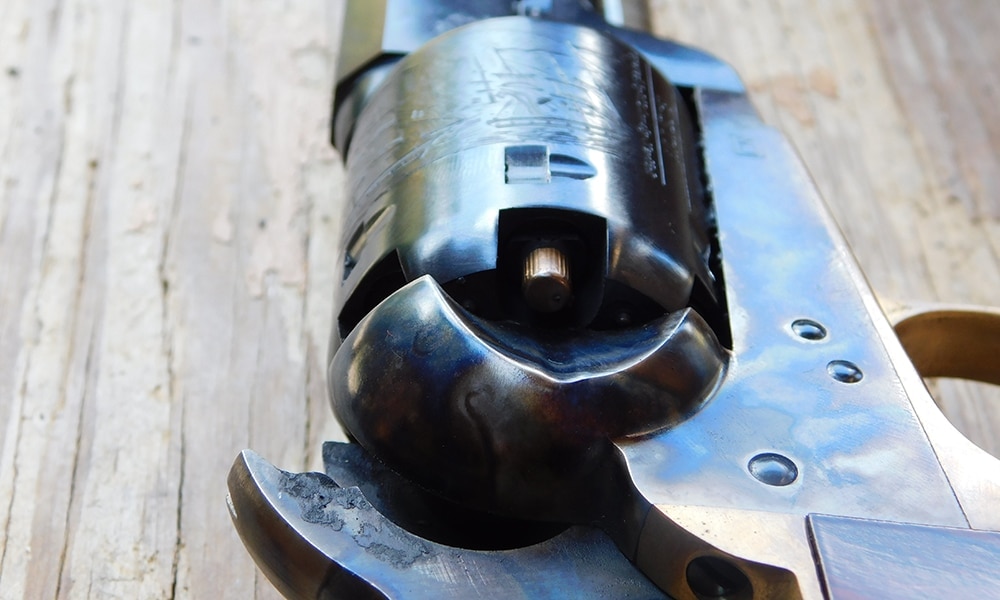 The gun must be in the half-cock position so the cylinder can be rotated for loading. Lastly, a No. 10 percussion cap is placed on each nipple so that the gun can be fired. (Photo: Terril James Herbert/Guns.com)

Taylor’s 1851 Navy met my expectations—for the most part. It is quite close to those original guns in design and lines with a deep blue to steel parts like the barrel and cylinder and a rainbow-like casehardening applied to the frame, hammer, and thin-faced trigger. Feature-wise, the first thing that jumps out to some new smoke wagon shooters is the Navy’s 7.5 inch octagonal barrel which is both prominent and long, but not ridiculous. The second box to check is the grip frame. While the frame that houses the grips—as well as the trigger guard—is made of brass, it is formed well and houses a stained, one-piece walnut grip. The third aspect that will jump out is the famous Battle of Campeche roll mark engraving on the six-shot cylinder. It’s somewhat artsy for what is supposed to be a utilitarian pistol. What certainly makes it utilitarian is the stupidly simple design. We have a single-action only revolver with rudimentary front post front sight and a rear notch ground in the hammer face. The barrel is attached to the action not by an enclosed frame, but by a wedge mated to the cylinder arbor. This might come as a culture shock today, but this was the system that worked well and dominated handguns for some time.

Black powder revolvers are an interesting animal and one that is bound to get attention at the range. To start, I put No. 10 percussion caps on the nipples located at the rear of the cylinder and popped them to clear out oil from the firing channel. With that done, you can load your paper cartridges or loose powder and bullet. With this pistol, it was mostly the latter.

The hammer is drawn back to the half-cock position so the cylinder spins freely. Drop powder down each chamber, followed by a bullet which is rotated under the rammer and pushed down into the cylinder with the hinged loading lever. The long lever under the barrel gives great leverage and I didn’t get sore of loading at any point. It is worth noting that using round ball projectiles is as easy as popping it over the chamber mouth and rotating for ramming while longer, conical bullets require a bit of starting to get going. With all chambers loaded you may elect to put grease over the chamber mouths to mitigate black powder residue that builds up shot after shot. 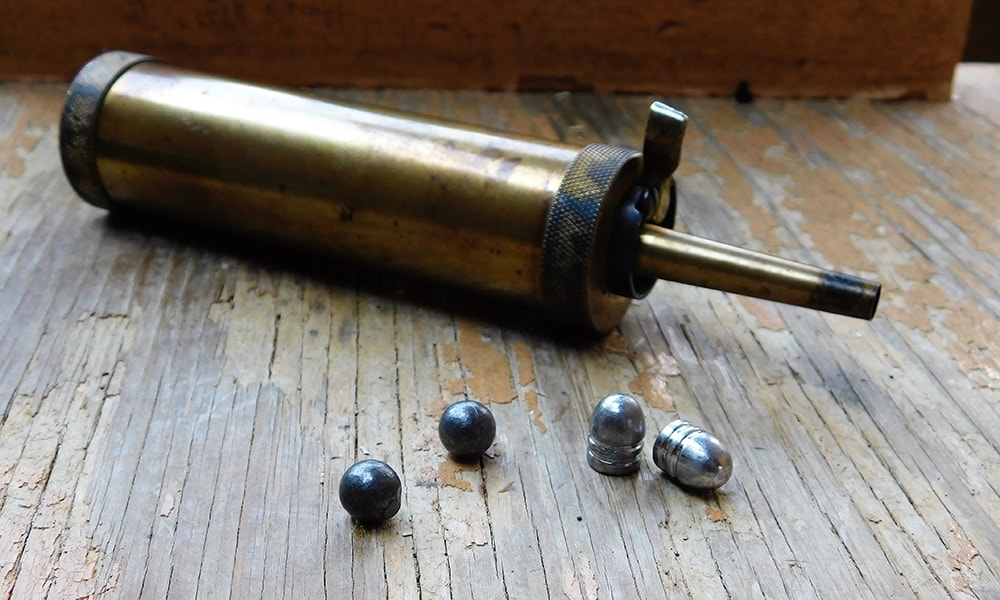 Historically, conical bullets (right) loaded in paper cartridges were the way to go when carrying ammo, but there is nothing wrong with loose powder and bullet—or ball. The 83 grain ball is a fair bit easier to load with no starting involved. (Photo: Terril James Herbert/Guns.com)

You now have a loaded gun, but it cannot fire until you put new caps onto each nipple. Then lower the hammer between chambers on one of the safety pins that arrests the cylinder from turning. Other than lowering the hammer on those pins or resting it on an empty chamber, there is no safety.

Shooting the Navy was a walk in the park, but it isn’t like breaking glass. Cocking the hammer is instinctive and is easy to do without changing a firing grip and the pistol’s legendary ability to point naturally—even while closing the eyes—is intact. But on this example, the front sight post is a little thick and it easily fills up the rear notch. The trigger breaks at just over four pounds—very light. There is a little bit of take up before it goes. Combined with those sights, I had to hold the pistol on target a little longer for steady one-handed shooting., a new shooter need not be intimidated. The trigger is quite good and the .36 caliber is mild in both recoil and in cost to shoot, even with maximum loads.

Those maximum loads, by the way, consisted of twenty-five grains of FFFg Graf & Sons black powder set off by Remington No. 10 caps. Cast Lee 130 grain .375 inch conical bullets are barely seated with this load while the 83 grain lead .380 inch round balls left a little room. 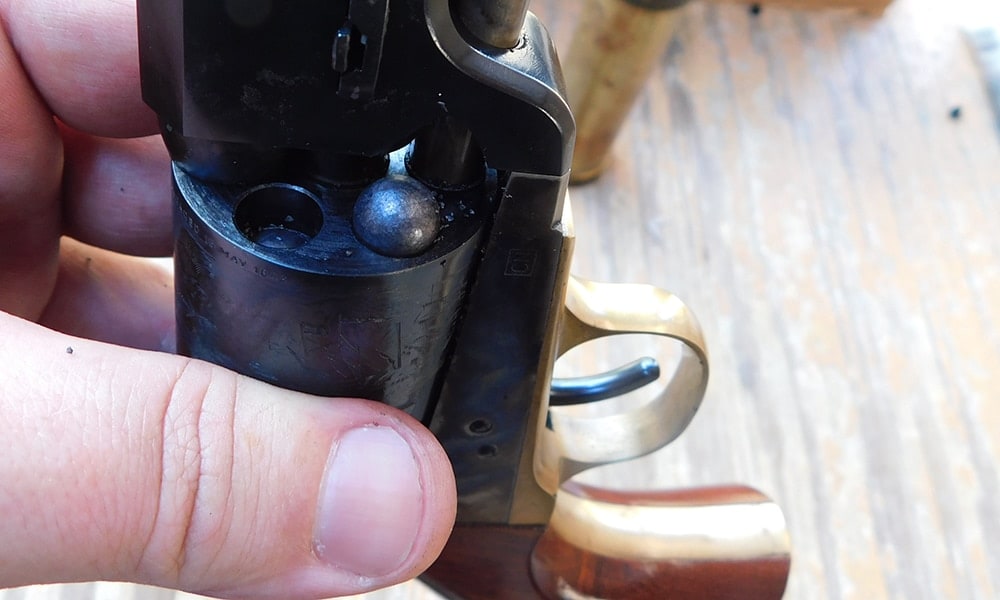 The Colt 1851 loads like any other percussion revolver with powder then bullet loaded from the front of the cylinder using the loading lever found under the barrel. (Photo: Terril James Herbert/Guns.com)

Both loads ate the three-inch circles I used for targets at seven yards, though the conical bullets performed the very best with a group at under two inches. Despite the lack of real sights, hitting a twelve-inch bullseye out to fifty yards was no issue. The 1851 Navy didn’t suffer from any cap jams through my two hundred rounds of testing and boasted accuracy you would expect from a modern service pistol.

The Uberti Navy has its problems. I am not a fan of the generic red stain used on the grips and the actions aren’t going to be as polished like that of an original Colt, but we are talking about guns with little defensive application being made today for our enjoyment at a price point that is far from breaking the bank. The Uberti is a step above the Pietta version because of its improved, more original grip frame and the ability to take conical bullets without modifying the loading port. I also appreciate that the ugly, but necessary proof marks are out of sight under the loading lever.

At the end of the day, I was out of powder and feeling vindicated about putting the 1851 Colt Navy at the top of my list. It’s massive popularity, both yesterday and today, should go without saying. You can buy a Navy just about anywhere black powder guns are sold, and the .36 caliber is both cheap to shoot, light on recoil, yet powerful enough to get some work done. You won’t get the compromised handling characteristics or ridiculous proportions of the .44 caliber guns which are more popular now. I can attest that the Pietta Navy is a good pistol, but the Uberti has advantages that make it worth a look, despite costing a little more.