Gun Review: The 1860 Henry Rifle, its history and reproductions (VIDEO)

Some guns blaze through history and forever change the face of firearms design.  The 1860 Henry Patent Rifle, though short lived, did just that. It’s now recognized as one of America’s greatest contributions to firearms design.  With originals rare and expensive—think $25,000 to $100,000—reproductions are the closest most of us will ever get to appreciating the model.  Two companies offer quality reworks, and Guns.com takes those from Uberti and the unrelated Henry Repeating Arms, to learn which lead slinging repeater comes out on top.

A Brief History of the 1860 Henry Rifle 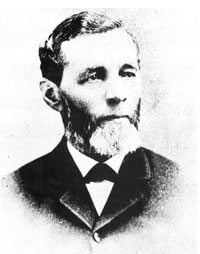 Benjamin Tyler Henry was a young man with a passion for firearms.  After working his way from apprentice gunsmith to foreman at New Haven Arms, he spent his off hours toiling away on his own design, and in 1860, he received the patent on his Henry Repeating Rifle, chambered in .44 caliber.  While he worked from previous designs like the Volcanic pistols, it was Henry’s rifle that came to be the first successful repeater on the market.

To fully appreciate the ingenuity of the Henry rifle of 1860, one must realize that soldiers and shooters of the day were firing two to three rounds per minute through their given Springfield muzzleloaders.  Shooters champed at the bit to afford the new Henry, and the firepower was revolutionary, leading to all subsequent lever action repeating rifles we know and love today, and leading directly to the advent of the 1866 Winchester “Yellow Boy” which made use of Henry’s .44 Rimfire cartridge.  Cost held back the 1860 Henry, as the muzzleloaders could be purchased for a quarter of the price.  Still, soldiers and civilians alike hastened to get their hands on this new advent, a repeating rifle that could fire sixteen shots without reloading at a time when other arms of issue were muzzleloading muskets that required reloading with each shot. 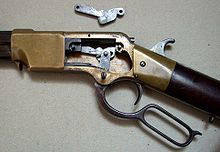 Stripped detail of the 1860 Henry’s toggle link action, which was reproduced by both Uberti and Henry Repeating Arms in the versions we have today. (Photo: Wikimedia)

Though the Henry Repeater never achieved in its time what we now in hindsight see as a pivotal American firearm design, some 15,000 Henry’s were produced.  As a testament to their quality and ingenuity of design, many survive to this day, though collectability of those patinaed brass beauties—and rarity of ammunition–far outweigh interest in firing these fine specimens.  Furthermore, .44 Rimfire ammunition is a hot commodity these days, with a single collectible round selling for anywhere from $50-$100.

Firearms collectors are most often students of history as well, and what better way to do that than by taking up a reproduction to get a feel for the time and gun. One can’t help but bring to mind thoughts of bygone days, the depth of history—from the Civil War to the Indian Wars, when firing either of these reproductions, even though they are both far improved from the true original.

Though we’re looking at two slightly different variations, with the Henry a carbine and the Uberti a full rifle, the internals, build, and features remain the same.  Both companies, however offer both styles, the rifle and carbine lengths, as well as “iron-framed” steel.  Lets look at how this pair of brassy attractive reproductions compare:

Finish: The fit and finish on both these reproductions is exceptional.  Though our Uberti is not a brand new rifle, it was an “Antique” version made to show premature age.  It still shows proud wood-to-metal finish and an eye for detail in such things as the barrel-mounted sling mount. Though our test rifle doesn’t wear it, newer Uberti reproductions show a case-hardened lever.  Likewise, the Henry is pure class.  The wood quality is out of this world, as is every touch on the carbine.  The grain of the Henry’s fancy American walnut gives it an edge here, but I’d be pleased to admire—and fire–either long arm.

Trigger: The Henry breaks repeatably at 6 pounds, 10 ounces.  The Uberti is not quite as predictable, pulling between 7 pounds, 8 ounces and just shy of 9 pounds. 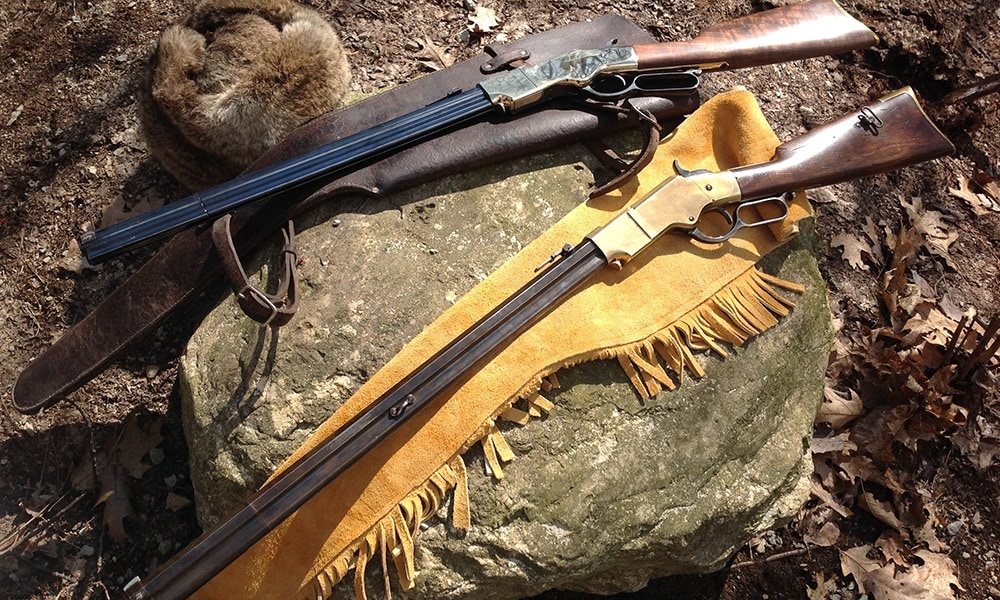 Sights: Both wear the classic folding rear ladder sight graduated to 800 yards.  Both shoot right on at 50 yards using the down-folded dovetail and dial in at longer ranges using the ladder, though really, firing the .44-40 much past 100 yards is unlikely.

Calibers: Since the true original .44 Flat Rimfire, also known as .44 Henry, is long obsolete, the .44 WCF is where it’s at.  The .44-40, though longer and snappier in a centerfire round, is similar to the .44 Rimfire in being a straight-walled case tipped with a 200-220 grain projectile. Both Henry and Uberti offer their respective reproductions in .44-40 as well as .45 Long Colt.

Specs: Both long guns make use of the traditional toggle link lever action.  Both also feature the trapdoor brass buttplate. The Uberti rifle weighs in right at nine pounds, while the Henry Carbine is close behind at 8.5 pounds. 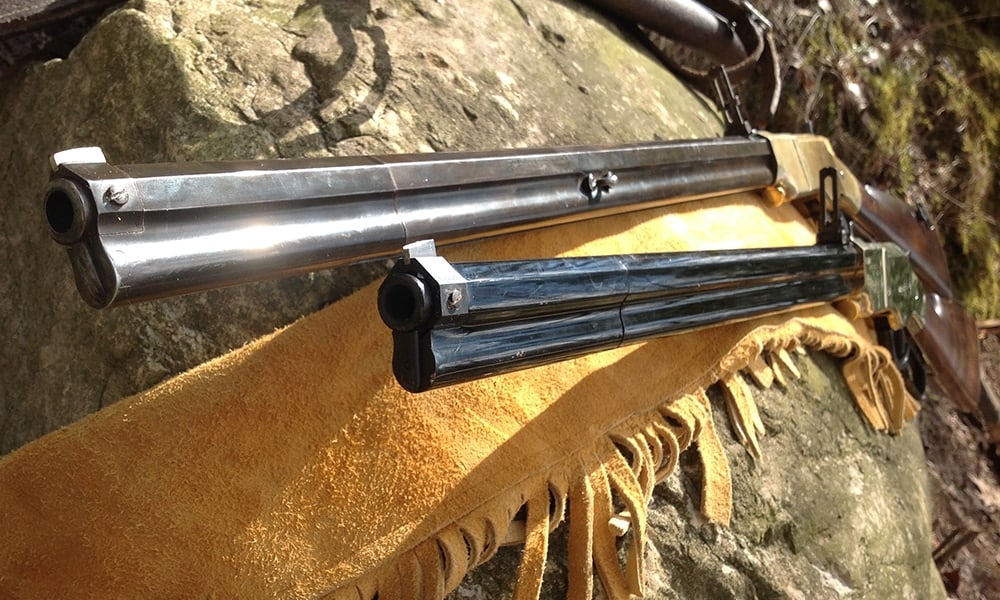 Authenticity: Henry Repeating Arms mills their barrel and magazine assembly from a single bar of steel. Both load true-to-form by pushing the follower all the way forward toward the muzzle and rotating the end of the tube to open.

Function/Accuracy: It should, and does, go without saying that both firearms ran with 100% reliability and pleasure.  We fired a mix of modern and cowboy ammunition: Hornady Cowboy, Winchester Super-X Power Point, HSM, and Buffalo Cartridge Outlaw.  Though the Uberti has a few more rounds down range than the Henry, its lever and tightness of action is significantly more loosely fit and without the smoothness of the Henry, though both get the job done just fine.

Manufacture: The Uberti, like all their many and true reproductions, is made in Italy.  The Henry Repeating Arms, however, holds true to its mantra of being “Made in America or Not Made at All”, this Rare Carbine coming out of Bayonne, NJ.  Big plus given here for an American company. 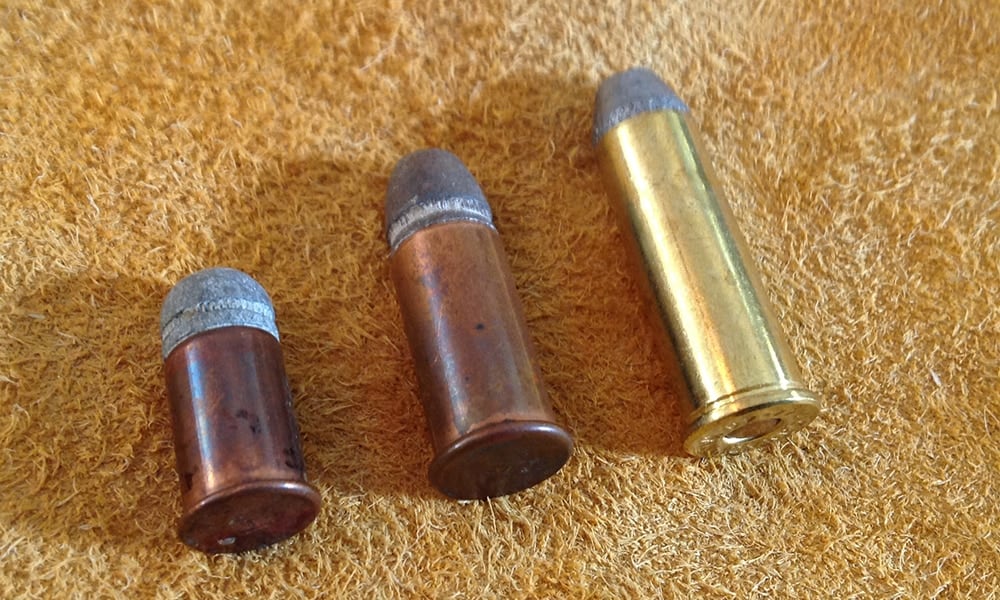 The trio of rounds tied to the 1860 Henry repeater. From left, a .44 Rimfire Short, .44 Henry Rimfire, and the modern .44-40 chambering of our reproductions. (Photo: Kristin Alberts/Guns.com)

Price: While our test model Henry Rare Carbine retails for $2,415, the Uberti comes in significantly lower, with base prices starting at $1,316 and going up from there, giving Uberti an obvious edge based on dollars alone.

Customer Service: There’s nothing wrong with Uberti; in fact, they’re a fine company.  Their guns, however, are imports and customer service is not near as responsive as that of Henry.  Of all the gun companies I’ve worked with over the years, none is more dedicated to satisfied customers than Henry Repeating Arms. Though they bear no connection to Benjamin Tyler himself, they do things right. 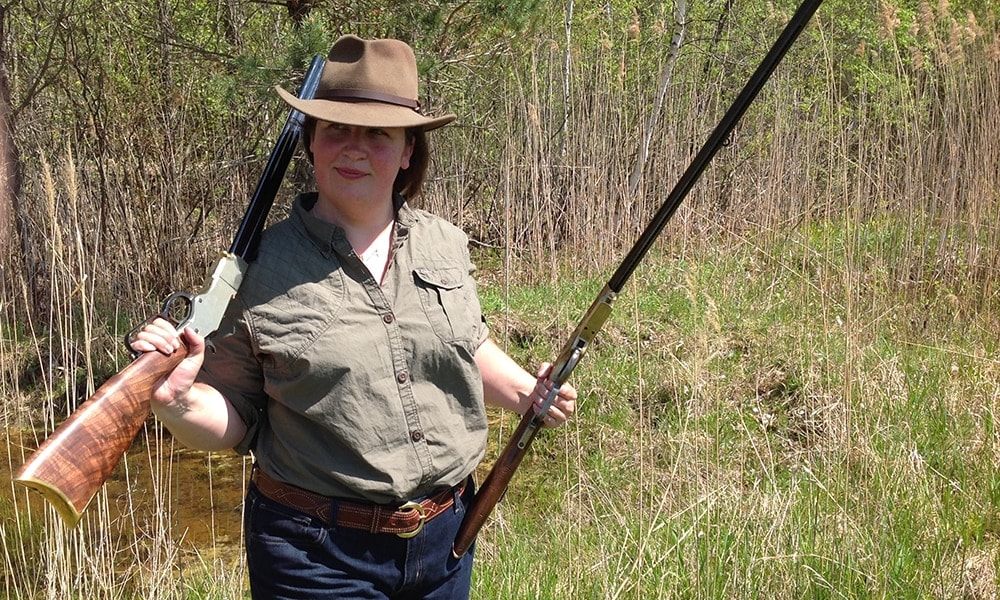 The author with a fine pair of 1860 Henry reproductions: the Henry Repeating Arms Rare Carbine and the Uberti Henry Rifle. (Photo: Kristin Alberts/Guns.com)

If you’re shopping for a reproduction 1860 Henry, the decision comes down to balancing dollars and cents with the desire to buy American and back a patriotic company.  No matter the choice, however, both the Henry Repeating Arms and the Uberti are fine and true reproductions, the two major players on the market honoring the story of Benjamin Tyler Henry’s innovative repeating rifle design.  One can’t help but be transported back to an earlier, wilder time with each flip of the 1860 Henry’s lever.  Regardless of the selection, the most important thing comes down to knowing not only the lore of our firearms, but also our unique American history.