If you’ve read my Beretta M9A1 review, or seen one of my countless M1911 articles, you’ll know that I’m a big fan of both of these prolific pistols. I love both the M92’s light single action pull and low recoil and hard-hitting ballistics of the .45 caliber M1911.

Though it wasn’t until a recent visit from SilencerCo that I began lusting for a hybrid that retains the M9A1’s silencer-friendly operating method, which is unimpeded by the weight of the sound suppressor.

It was at that very moment that I recalled a variation of Beretta PX4 Storm, chambered in .45 ACP with an FDE frame and extended barrel: the PX4 Storm Special Duty Type F. 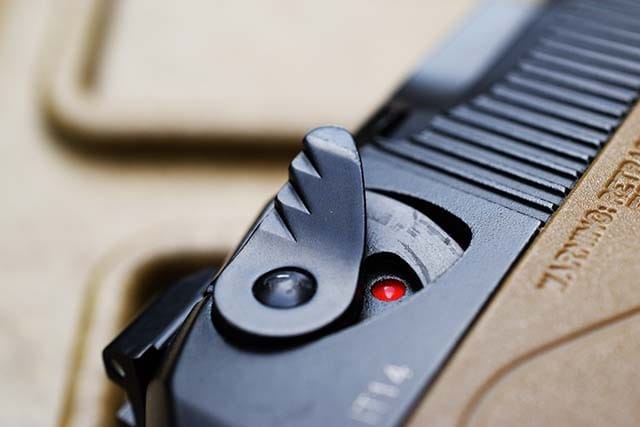 The PX4 Storm’s frame-mounted safety is fully ambidextrous and doubles as a decocker (Photo: Jim Grant)

The SD variant of the Beretta PX4 Storm is the result of the U.S. military’s Joint Combat Pistol program of 2005. The premise behind this program was to replace the aging stock of M9 pistols currently in use with U.S. armed forces with a superior weapon.

It stipulated that the weapon be chambered in .45 ACP, more resistant to salt spray be capable of mounting a sound suppressor and be capable of firing 5,000 rounds without failure. Furthermore, the replacement pistol should have a grip no larger than the standard M9, feature a low-glare finish and ideally be in FDE.

This program spawned the creation of countless quality combat handguns like SIG Sauer’s P220 Combat TB, FN’s FNP-45 USG and the Heckler & Koch HK45. All of these weapons are world renown for their durability and reliability, so how does Beretta’s JCP entry, the PX4 Storm SD measure up? Damn well.

Like the HK45 and FNP-45, the Storm SD features a polymer frame, external safety and extended barrel to facilitate mounting a sound suppressor. Unlike the other applicants, however, the PX4’s barrel isn’t threaded from the factory, which is truly unfortunate, since its rotating barrel design isn’t hampered by the additional weight of a sound suppressor like the Browning-style locking action of the other pistols.

That’s right, the Beretta PX4 Storm series of handguns don’t utilizing a traditional locking method of operating, but rather a rotating, camming lock.

Once internal pressures have dropped to a safe level during the recoil cycle, the PX4 Storm’s barrel rotates 45 degrees. The barrel’s lugs cam against a locking block with curved grooves that allow the barrel to travel a short distance rearward, unlocking the action. The remaining hot gas from the recoil then propel the slide back, ejecting the spent shell casing, before the compressed recoil spring’s pressure returns the slide and barrel to the locked position, while chambering a fresh round.

The next logical step is to ask, why? Why would Beretta choose this method of operation over the more common Browning-style locking lug? One word: recoil. The rotating barrel method translates some of the recoil radially, as opposed to straight back at the shooter. When shooting, you’ll notice that your muzzle doesn’t rise as much as other polymer .45 ACP handguns, but that the recoil impulse feels different.

What you’re feeling is torque from the rotating barrel. It’s not significant, but definitely noticeable. The recoil reduction on the other hand is very noticeable, though I’m somewhat biased, since my favorite carry gun, the Boberg XR9s, also utilizes a rotating barrel. 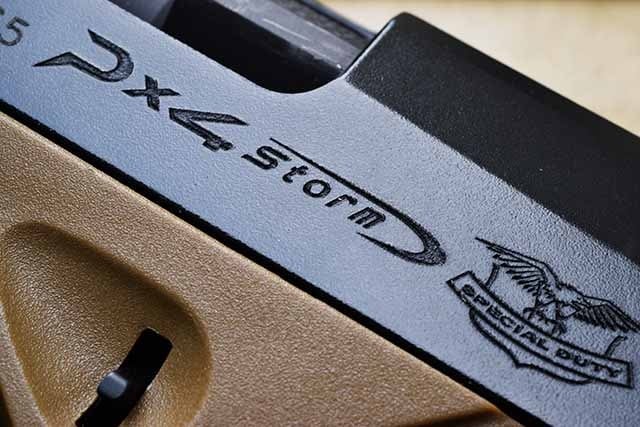 The PX4 Storm, it’s magazines and accessories ship in a fitted, flat dark earth colored airtight Pelican-style case featuring the Beretta logo on top. Inside the case you’ll find two additional backstraps for the pistol that allow shooters to change the PX4’s grip to better fit them and two reversible magazine release buttons for the same purpose.

In testing, I found the accuracy of the PX4 Storm to be on par or better than the gold standard of polymer pistols, the Glock 17. I was able to place all rounds touching at 10 yards with Federal American Eagle and SIG Elite Pro ammunition, with groups opening up when shooting Wolf brand ammo.

After getting a feel for the recoil and large combat-style iron sights of the PX4 Storm, I decided to stretch its ballistic legs at 25 and 50 yards. At 25 yards, hitting bowling pins is an easy, point and click affair, and 50 yards is a little more difficult due to the relatively small size of the pin combined with the PX4 Storm’s enlarged front sight post.

These over-sized three-dot sights may be detrimental to bullseye shooting, but are ideal for defensive or combat shooting, since they make acquiring a proper sight picture much quicker. 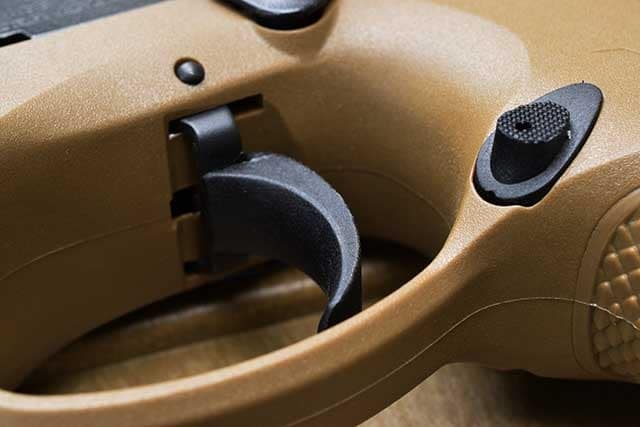 Switching between rounds, there wasn’t a noticeable shift in point of impact, which is good since the PX4 Storm’s sights are only adjustable for windage.

Now for the most subjective portion of the review, ergonomics. In my experience the PX4 Storm fits my hand better than a standard, full-sized Glock, but not as well as an M1911 or Browning Hi-Power pistol.

Initially I had issues reaching the magazine release without significantly shifting my grip, but remedied this by swapping out the medium back strap for the small one and the smallest magazine release button for the largest one. In total this took around ten minutes and thankfully the Beretta pistol includes all the tools necessary to perform this change. Recoil, as I mentioned earlier, is significantly reduced thanks to the weapon’s unorthodox rotating-barrel design. 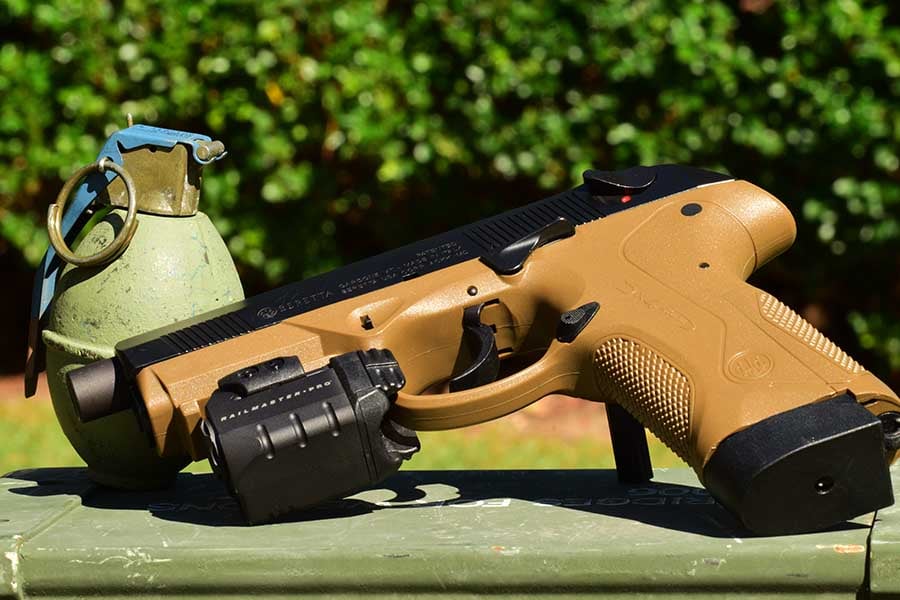 Despite being chambered in .45ACP, the PX4 Storm has a comfortably slim grip. (Photo: Jim Grant)

The PX4 Storm is an easy-shooting, ergonomic .45 ACP polymer pistol with a stellar record of reliability and impressive accuracy, but why doesn’t everyone own one? Price. Retail goes for $1,145, placing it just outside the financial reach of most shooters. While the street price of the Storm SD is often below $1,000, this is still nearly twice the price of a standard PX4 Storm.

This may seem over-priced, but is right in line with most of the other JCP entries offered on the civilian market today. Shooters new to handguns or the PX4 Storm system, may want to buy the standard PX4 Storm and invest the remaining money in extra magazines, ammo and training. However, if you love Berettas or PX4 Storm pistols and want either a .45 caliber sound suppressor host or the most durable .45ACP pistol Beretta has ever made, the PX4 Storm SD Type F is the pistol for you.