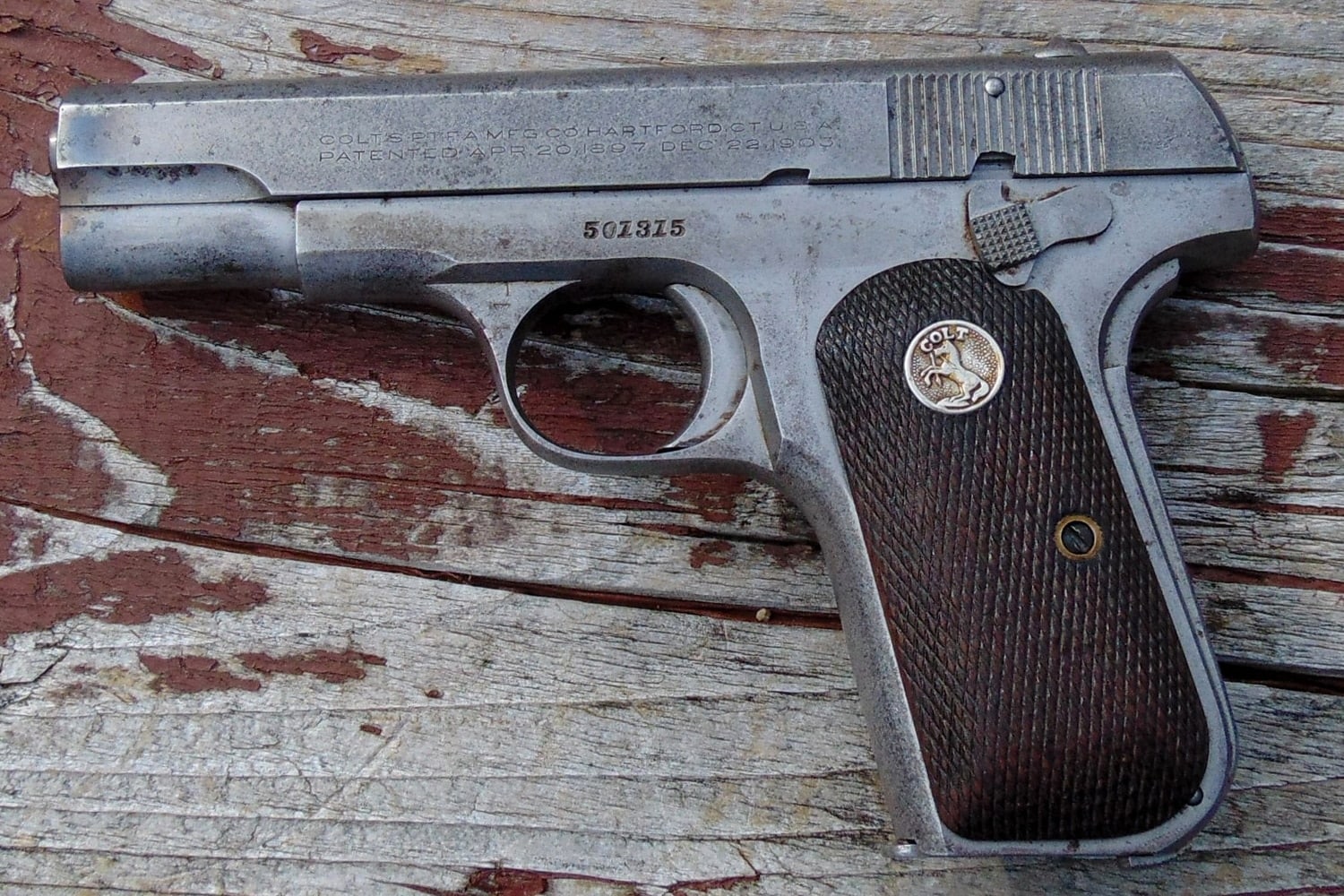 No one today gives any thought to the number of small pistols because so many options are available, but at one time the variety was not so plentiful. But it was one pistol in particular that got the ball rolling for the pocket gun craze, and it’s been rolling on ever since, the Colt Model 1903 Pocket Hammerless.

If you wanted to buy a handgun at the turn of the century that was small and concealable, you options were pretty limited. Most of the choices were revolvers, the venerable 1911 was not even a blue print, and semi automatic pistols were in their infancy. John Browning, however, had designed a new semi-auto pistol around the fairly new .32 ACP cartridge.

The new gun was dubbed the Colt Model 1903 Pocket Hammerless, or behind closed doors at the plant, the Hammerless Model M. Although the name was misleading, the gun did have a hammer, but it was concealed inside the slide. This gave the 1903 Colt the ability to be carried in a pocket without worrying about it getting snagged. Offered in blue or a nickel finish, the first Colt 1903’s came with hard rubber grips and later wore wood grips with a Colt medallion.

The early Colt 1903 had a four-inch barrel, then later a 3.75 inch barrel and they had various barrel bushings throughout their production, the earliest being separate and then later integral. Overall the pistol was 6.75 inches long, 4.375 inches tall and just a scant 7/8 of an inch in width. Compare the Colt 1903 with the Glock 43 which is 6.25 inches long, 4.25 inches tall and one inch wide and the Glock 43 was designed for concealed carry in every way shape and form.

While the .32 ACP is no powerhouse by today’s standards, you have to remember that none of the cartridges we take for granted today were available. The 9mm was only first being experimented with in Europe, the .45 ACP wouldn’t be seen until 1905 and the only .40-caliber rounds at the time were in revolvers. The .32 ACP had a 71 grain FMJ that was listed as having a muzzle velocity of 900 fps and the Colt 1903 had a magazine capacity of eight rounds, giving you a total of nine with one in the chamber. The magazine release was a heel style, which was typical of the day, especially in Europe. Like many of John Browning’s other designs, the Colt 1903 proved to be well ahead of its time. It not only had a thumb safety, but a grip safety as well, something that would be popular on other Colt pistols. 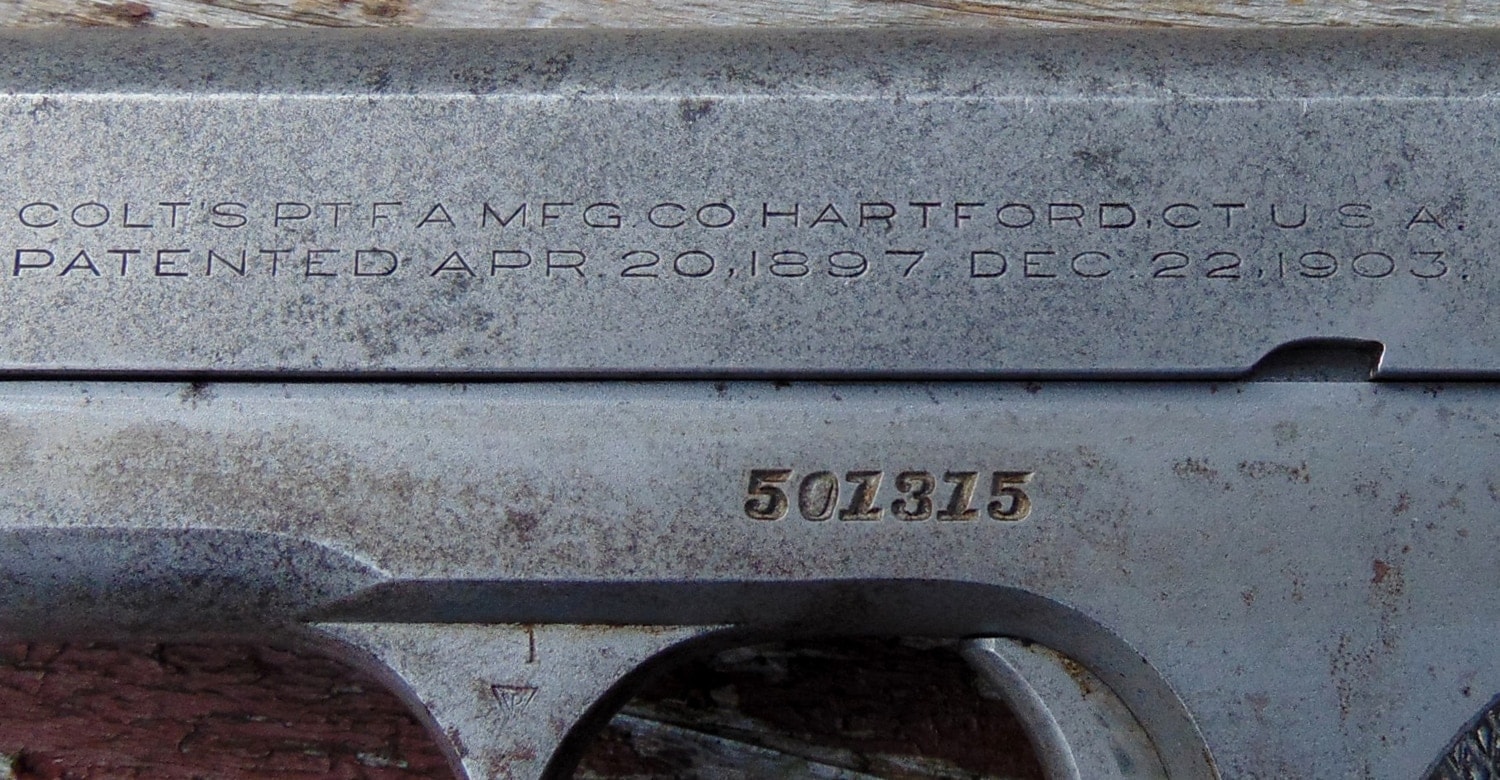 The pistol became an instant hit with anyone who felt the need to carry a gun, from cop to crook alike. They became an issued handgun to several police agencies in various parts of the country. Soon there was clamor for a more powerful version, so Colt created the 1908 Pocket Hammerless (not to be confused with the 1908 Vest Pocket), which was essentially the same gun but in the new .380 ACP.

The Colt 1903 though was still popular for decades even after the 1908 made its debut and during the production run the 1903 was by far a much more popular. There were more than 770,000 of both models produced, but only 138,000 of those were Model 1908 Pocket Hammerless pistols.

The 1903 found a home in various parts of the world. The British bought several for use in Ireland in 1921. Japanese officers preferred them to their own issue handguns. The British again received more 1903’s prior to World War II as part of the Lend-Lease program.

In addition to other governments, both the 1903 and the 1908 Pocket Hammerless models found their way into the US Military. Known as the General Officers Model pistol, they were issued to those officers who were carrying a sidearm, but didn’t need the heft and weight on a 1911 Colt. There were 4,000 issued and of those, 2,500 were 1903 versions. These guns were parkerized but a small few were blued and had the US Property markings on the right side of the frame. Some more famous names carried the 1903, including General Douglas MacArthur for a time. The Office of Strategic Services also preferred to issue the 1903 over the 1908. The General Officers Model was issued until the 1970’s before finally being phased out. 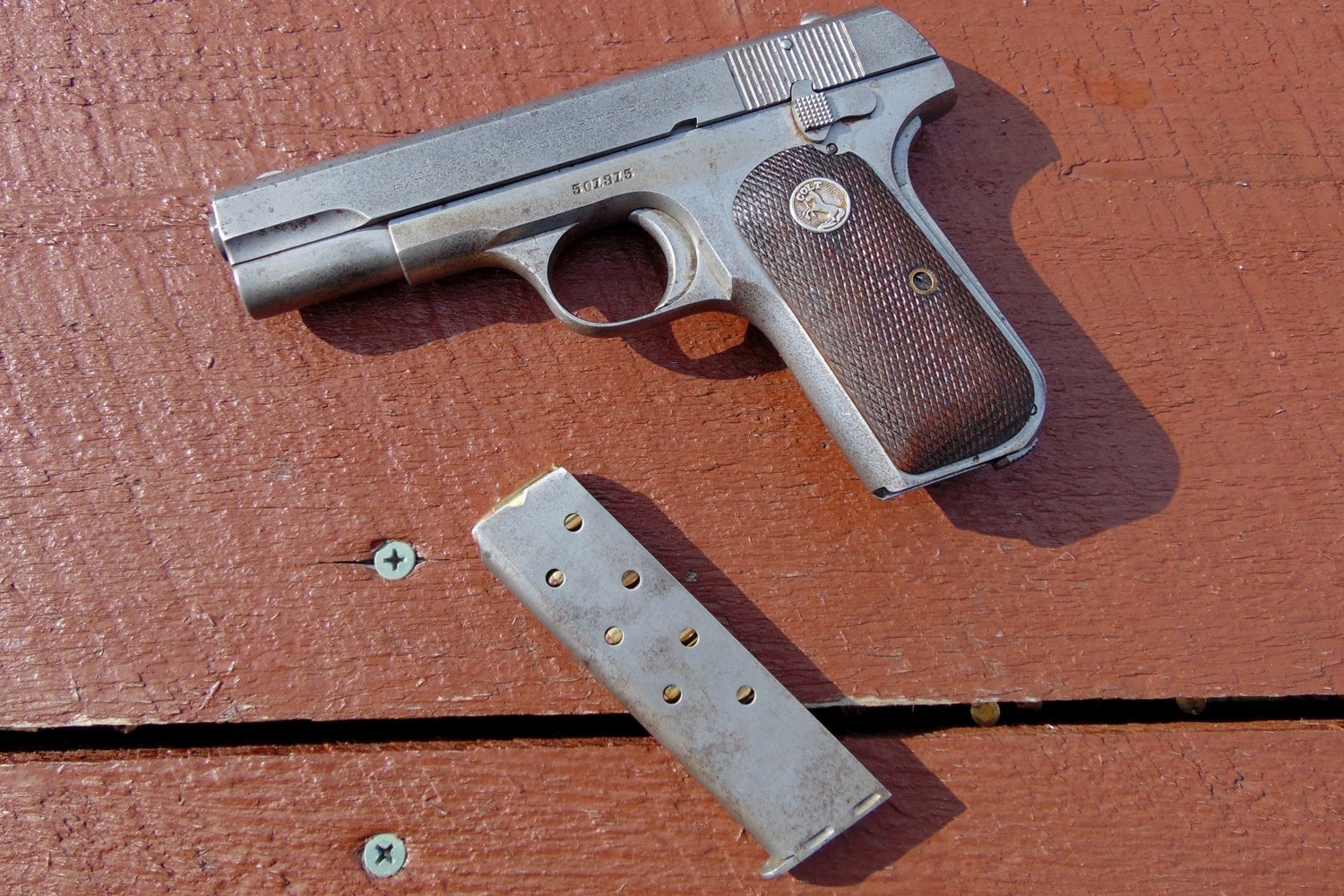 For those out there who have a hankering for these guns but for some reason don’t want an “old” gun, Colt is now offering the 1903 Pocket Hammerless once again. Colt has teamed up with the U.S. Armament Corporation and is producing the 1903 General Officers Model which looks identical to the same gun that was made fifty years ago. It is chambered in .32 ACP and has a MSRP of $1,350, a price point that might scare off the average shooter.

I have always had a deep admiration for the Colt 1903, and recently I was offered a chance at one with an interesting family history. It has a well worn nickel finish, and was in the same family for apparently its entire life until the original owner passed away and then got traded around until someone finally got sick of storing it and didn’t want guns in the house. The serial number puts it as being produced in 1930 and even though the finish was pretty much gone, the gun is perfectly functional except for the need of a new recoil spring which I acquired from Wolff.

I took the old Colt out to the range with the only .32 ammunition I could even scrounge up locally, and that was a box of Aguila 71 grain FMJ. The advertised velocity of these is listed at 905 fps with a muzzle energy of 129 ft lbs, hardly a barn burner today but in 1903 was well respected.

I first tried the Colt 1903 at seven yards and the little pistol grouped very well considering how small the sights were. The recoil is almost non-existent and it’s quite easy to see why the little Colt was so popular. The gun balances perfectly and fits the hand well. 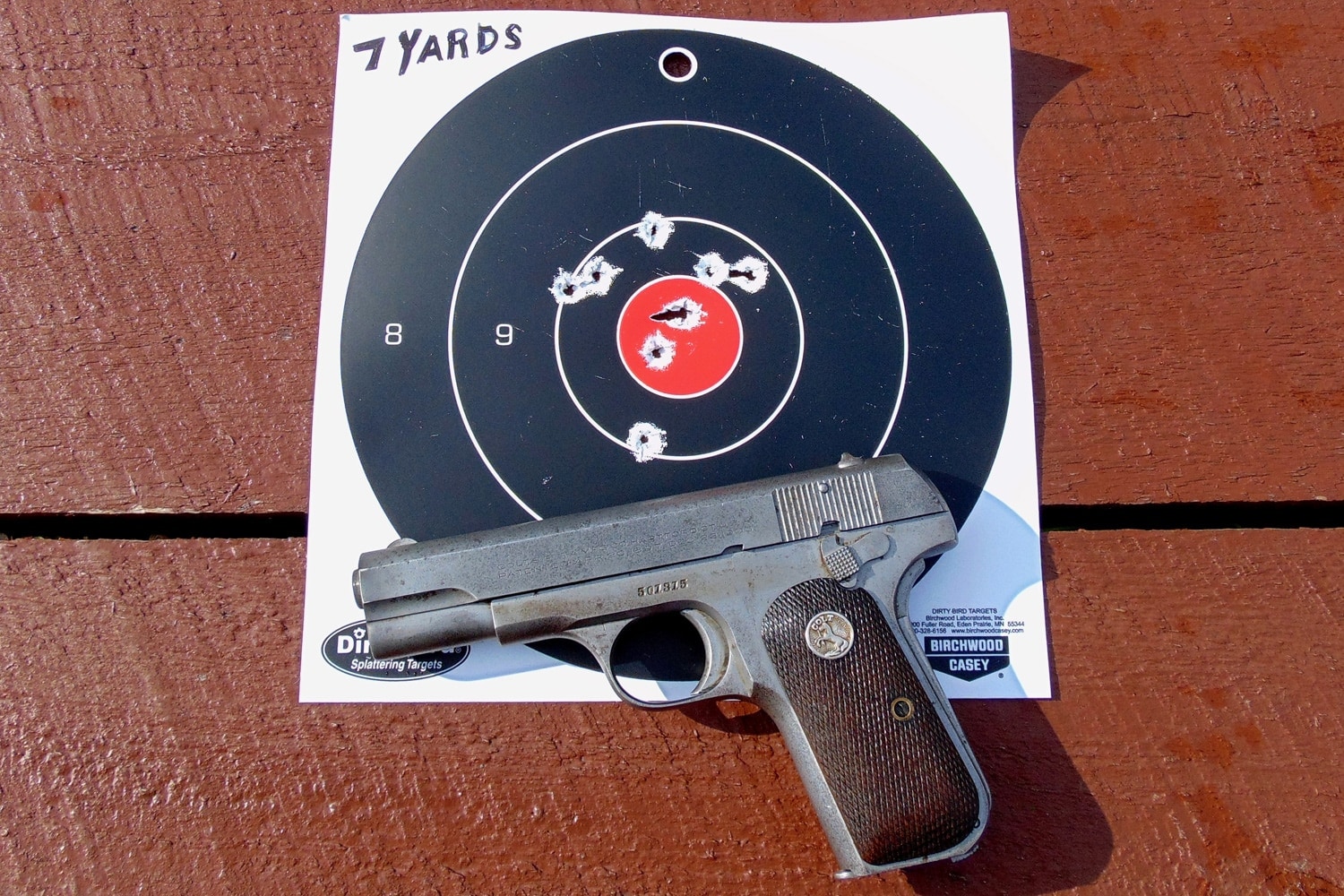 For those who have shot the 1911 before, you can see where John Browning perfected that grip angle from when you hold the 1903 Pocket Hammerless. I shot 50 rounds at various targets and every single one went off without a hitch, no feeding issues, not a single hiccup, certainly not a bad outing for a gun that is coming up on 90 years old after a couple more winters. While it is certainly not what I would choose to carry concealed in this day and age, I would not at all feel as though I needed something more if I slipped this little Colt into a pocket holster, which I have done once or twice for just a quick trip. I am not sure how well hollowpoints would feed in the 1903 Colt since the gun was not made for them.

The Colt 1903 Pocket Hammerless was an innovative handgun that was ahead of its time when John Browning designed it well over a century ago, it started the trend of small frame concealable handguns that could be carried reliably and safely, and no matter where the trend goes, we all know where to look back to see where it began.