Remember the Masada carbine? The rifle that Magpul should have released a few years back? They purported it would do everything the AR-15 could, but better for $1,500. Then Bushmaster bought out the design and created the Adaptive Combat Rifle. The price doubled and many of the features that made the Masada carbine revolutionary, like the quick-change barrel, were absent on the ACR and never mentioned again.

Why dredge up the past? The development of the Beretta ARX-100, the civilian variant of the ARX-160, draws strikingly similar parallels to what eventually became the ACR. Extensive use of polymers, quick-change barrels/calibers and delayed public release made for a nerve-racking development cycle, especially to those of us familiar with the industry. Thankfully, Beretta learned from the mistakes of Magpul and Bushmaster and left the design completely intact and delivered the semi-automatic mil spec carbine Italian weapon enthusiasts and black gun geirdo’s have been clamoring for, the ARX-100.

The ARX-100’s roots lie in the Italian assault rifle, the ARX-160. The Italian armed forces designed this rifle to replace the aging stocks of AR70/90 rifles. In fact, the evolution of the Italian military’s small arms is strikingly similar to that of the United States.

Post World War II Italy — no longer controlled by the Fascist government of Benito Mussolini — needed a modern battle rifle to replace its notoriously lackluster Carcano rifles and carbines. As part of the lend-lease program, the U.S. sent thousands of M1 Garands to re-arm Italy against the possibility of a Soviet invasion. These rifles proved decently popular and in the 1950s, Italy shipped in the required tooling to build their own licensed Garands (which were later exported to Indonesia and Morocco). This eventually lead them to develop their own M14, in everything but name, the BM59.

While the U.S. military’s newest rifle was a modification of the M1 Garand’s design, Italy decided to literally modify the Garand into an Italian equivalent of the M14. Like the American battle rifle, the BM59 suffered from many of the same issues: it was needlessly heavy, the ammo was cumbersome and the weapon was uncontrollable on full-auto. Unlike the M14, the BM59 stayed in service as a front-line rifle until 1990, when the AR70/90 assault rifles fully replaced it.

The AR70 followed in the M16’s footsteps, further proving my theory of paralleled development between the small arms of Italy and the U.S. The AR70 utilized polymer furniture and lightweight, high-velocity projectiles. It even featured a similar iconic carry handle sight. Eventually Italy realized the shortcomings of this platform and sought many of the same improvements as the U.S. in the next generation weapon system — integrated rails, improved reliability and ambidextrous controls.

Our two nations differ greatly in size. Italy’s armed forces are significantly smaller than that of the U.S. Meaning, the logistics, politics and capital behind adopting a new assault rifle aren’t nearly as obstructive in Italy as they are here. Thus, while we are stuck with M16/M4 variants, our culinarily superior allies have their own domestic take on the FN SCAR or ACR. What’s more incredible is the arrival of this weapon’s civilian cousin, the ARX-100 on American shores.

The ARX-100 ships in a black padded nylon carrying case with the ARX and Beretta logos embroidered in silver-thread. The case contains the rifle, a tactical sling and a steel unmarked 30-round magazine with an anti-tilt follower. Normally shipping with a single mag would bug me, but given the inexpensive ubiquitous nature of AR15 magazines, most shooters either have some or can get some for a little scratch.

Enough about economics and history how is it in action? In a word: awesome. 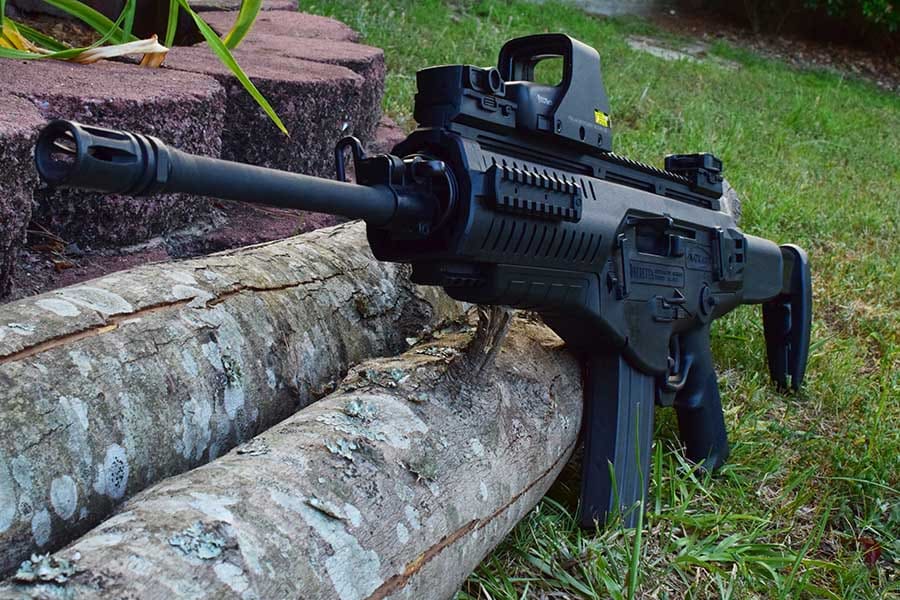 The ARX feels like a fusion between an AK-47 and M16 with a dash of Italian style and flavor, for good measure. In terms of reliability the ARX runs forever, provided you have good magazines and the gas system set correctly.

With the gas set to “S” or standard, the ARX will run with brass-cased commercial and military ammo flawlessly, which provides the shooter with an easy-shooting, accurate carbine.

The second setting, “N” for non-standard, is for when you want to shoot under-powered ammo like Wolf or Tula through the weapon. This setting can also be utilized in an emergency when the gun is extensively fouled or dirty and refuses to cycle — though you should do so at your own risk. 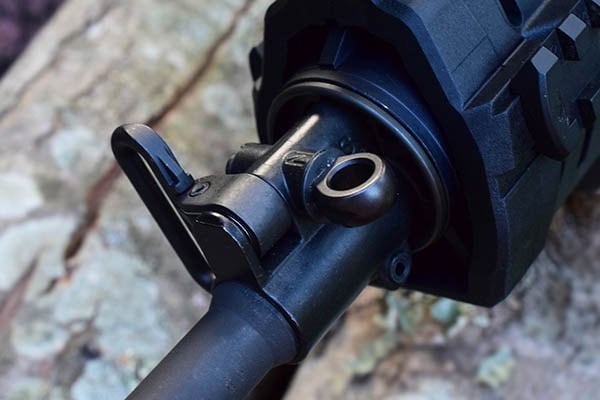 In terms of magazines, regular STANAG magazines and early generation (first or second) Magpul magazines work best. In my testing, only three of my 25 magazines refused to function: a Korean KCI magazine, a Magpul Gen three windowless PMAG and the SureFire MAG5-60 quad-stack 60-round magazine.

(A quick note about the SureFire mag: It became so thoroughly lodged inside the magazine well that a friend wrenched it loose while I pulled on the receiver. To put it blunty: leave these magazines in your AR.)

The next feature that caught my eye was the pistol grip integrated into the lower-receiver. I would have preferred a standard AR15/M16 grip interface, but the ARX grip is comfortable for my smaller hands and also fits my larger shooting buddies. The next human-interface is the fire-selector switch/safety, which you can easily toggle with the firing-hand’s thumb. Nearly all of the ARX-100’s controls appear to be intelligently located and designed for all shooters to use, with the exception of the bolt-release. 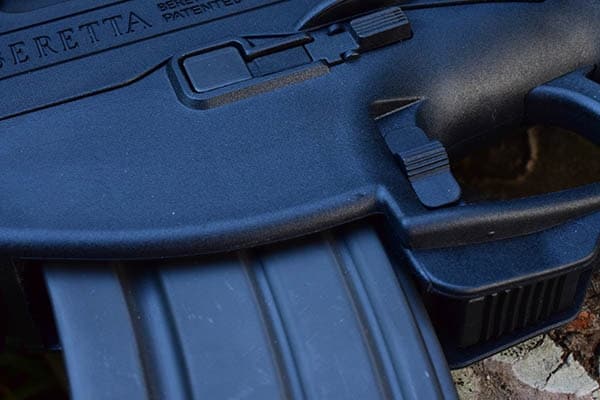 While the bolt-release on the ARX-160’s predecessor, the AR70/90, is almost identical in shape, function and location to that of the M16, the ARX series of rifles took a less traditional route. The ARX bolt hold-open is located on and under the trigger guard, which sounds fantastic in theory, but leaves something to be desired in practice. The idea is brilliant and the execution flawless. If Beretta simply inverted one of the two controls, it would be my preferred location/setup. The hold-open on the bottom of the trigger guard is adjacent to the magazine-well and serves to guide magazines into the well. If held while the action is charged, the bolt locks back. Not bad, but how phenomenal would it be if the button functioned as the release? In one motion a shooter could insert a fresh magazine with his thumb on the spin and strike the bolt release, chambering a round. 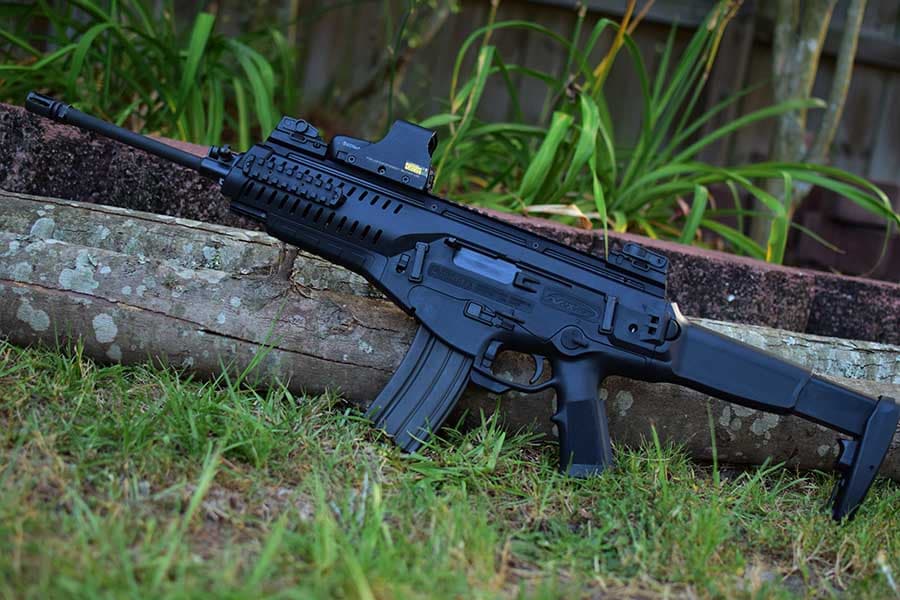 The ARX comes loaded with more features than a luxury car. (Photo by Jim Grant)

This is a minor complaint, especially given the rest of the rifle’s stellar features, like the adjustable folding stock and the quick-change barrel system. Initially, I didn’t see the utility for most civilian shooters. A skilled person can remove and replace the ARX-100’s barrel, sans tools, in under 30 seconds. Simply lock the action open, remove the bottom handguard cover, pull down on the barrel release levers and pull the barrel free. A hell of a feature on a squad automatic or an LMG, but not so useful on a civilian weapon. At least, that’s what I believed until I heard about the caliber conversion kits. 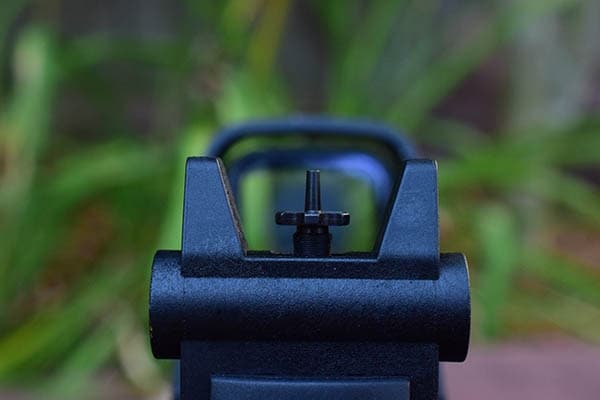 The ARX-160, the military version of the ARX-100, currently has kits that convert it to .308, .300 Blackout and even 7.62x39mm. What’s really interesting is that the 7.62x39mm conversion accepts the el-cheapo indestructible Soviet AK magazines. So you won’t have to buy those pricey AR-style mags, with a marginable reliability at best. Kits for .300 Blackout should be available very soon, but there is no date set on 7.62x39mm or .308 kits.

Being a piston-operated rifle, you would expect die-hard reliability from the ARX-100 and it does not disappoint. I fired 750 rounds of WarTak steel-cased Ukrainian ammo through the ARX, unlubricated. Then followed up with 250 rounds of Federal NATO-spec 5.56 ammo. There was only one failure to eject, caused by a broken magazine-follower in a Vietnam War-era 20-round magazine. Removing the 20-round magazine was tricky though, due to the ARX’s lengthy magazine well, so avoid 10- or five-round magazines. 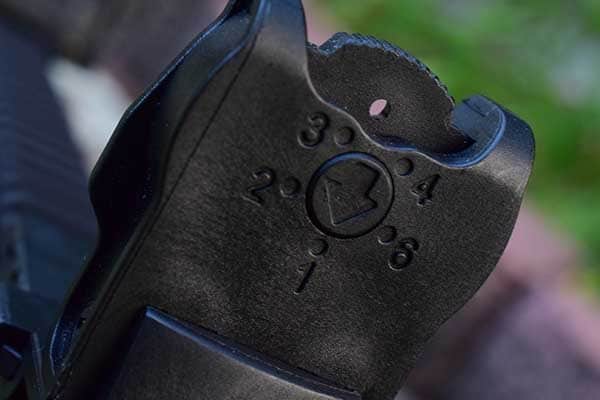 The included BUIS is pre-zeroed for 100-600 meters, but doesn’t co-witness with Eotech holosights (Photo by Jim Grant)

While the ARX’s strange appearance initially struck me as ugly, it grew on me as time passed. I was sold once I paired it with my EOTech holosight. Although the provided irons do not co-witness with an EOTech, the ARX-100 co-witnesses perfectly with an Aimpoint CCO. The irons provided with the ARX are constructed primarily of polymer and have elevation presets for 100, 200, 300, 400, 500 and 600 meters, designated by indented numbers one through six accordingly. The irons don’t inspire a great deal of confidence in their construction, but are easily removed and replaced by standard AR15 BUIS.

With an MSRP of $1,950, the Beretta ARX-100 may not be the most affordable AR15 alternative, but since when did Italian performance come cheap? While the ARX-160 may not be the Ferrari of black rifles, it surely is an Alfa Romeo with its proven performance, fast-handling and quirky appearance. The ARX-100 is a nice change of pace in a market drowning in AR clones and will turns heads at the range with its unique appearance and unstoppable reliability.