Walther Arms presents a serious contender for both range and concealed carry use with its PPQ SC, the subcompact interpretation of its PPQ series pistols.

The PPQ SC is s a pistol that packs a big dose of desirable features into a small package. Walther designers headed straight to problem-solver mode with this one, they were serious about addressing common gripes among pistol shooters and concealed carry practitioners.

Chief among the problem-solving features of the PPQ SC is truly ergonomic design. By now, striker-fired pistol fans expect modular grips. Walther delivers, providing an “average” backstrap as well as a thicker one tailored to large hands.

Just two grip choices may seem like slim pickings until one handles the pistol. A short distance from the top of the grip to the trigger make for an easy reach for most. 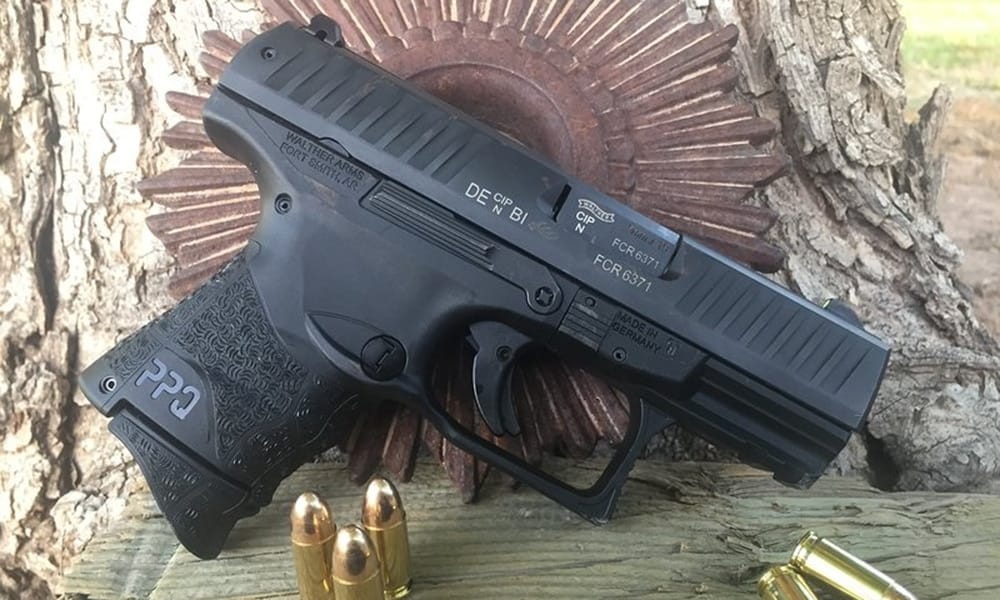 Even more impressive is the very easy-to-reach, easily operated magazine release. Walther took a chance with its fan base in departing from the company’s classic paddle release. In my opinion, the more traditional button mag release is a win, as it’s easier to use than most others. Intelligent molding, along with the option to change sides on the release, makes access by the thumb easy while making unintentional pressure from an external object, like a seatbelt, unlikely. This is one of very few pistols on which I can release the mag without dislodging my firing grip in the least. Efficient reloading is also aided by how the mags are ejected, rather than dropped, from the well. Loaded or empty, they shoot out with surprising gusto.

User-centered features don’t end there. Walther Arms employs a sensible, but rarely seen, feature in its extended slide lock. It’s all ambi, all the time. The extended lever keeps the slide lock in reach and easy to operate, even for fatigued hands. Throughout testing, the slide lock, when used as a release both right- and left-handed, sent the top round into battery without fail.

The PPQ SC’s ejection port is extraordinarily functional and will be appreciated by experienced shooters, especially southpaws. It’s a generous opening, extending past center. In terms of efficient unloading and malfunction clearances, its design makes the task as easy as possible. 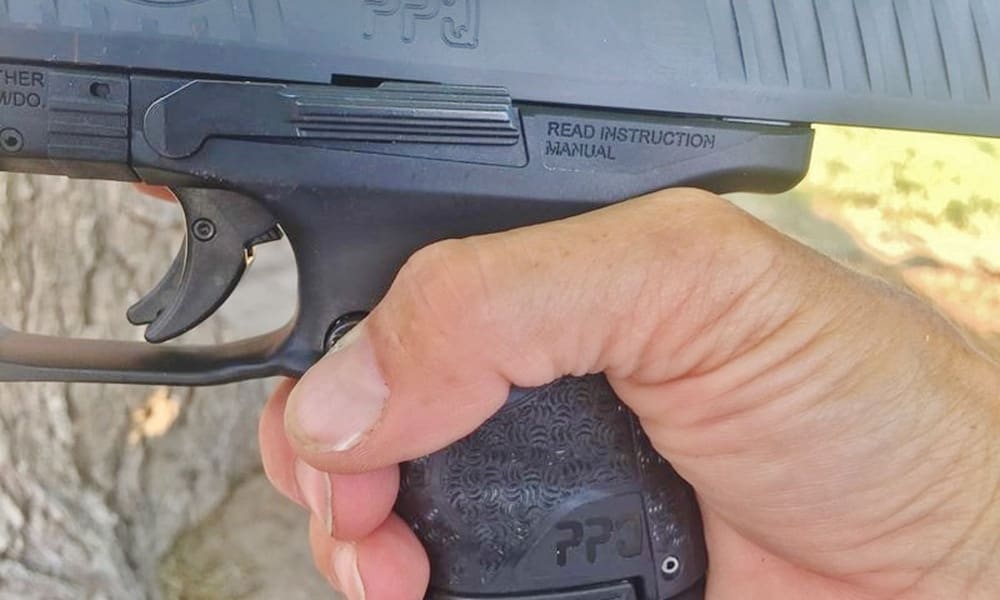 Ergonomics deluxe — the SC’s controls are within easy reach on both sides of the frame. (Photo: Eve Flanigan/Guns.com)

Night sights are a desirable upgrade for a home- or self-protection gun, and here, the user is provided with some satisfaction. The polymer sights have a luminous three-dot sight layout, the kind that’s brighter when the gun’s been exposed to light. There are better options, and in fact steel sights are available by factory order, but these stock ones are far better than non-luminous sights. The rear sight is windage-adjustable.

Additional molded-in conveniences include cocking serrations fore and aft of the ejection port, shallow texturing on the grip, and a light rail.

Field stripping the PPQ SC is the easiest I’ve ever encountered. With the slide manually held slightly rearward, two textured, easy-to-operate buttons on each side unlink the upper and lower.  The recoil spring is a two-thickness one, a contributor to a reduction in felt recoil. The guide rod is polymer— less durable but lighter than steel. Considering the company’s solid warranty, I’ve got no beef with the choice of polymer.

In yet another demonstration of answering customer demand, Walther includes three magazines. One ten-rounder has a flat floorplate; the other has a pinky shelf. An extended 15-round mag is also included, making the gun a true contender for crossover performance between range and concealment use.

In this writer’s opinion, reliability is the single most important feature of a self-protection gun. The PPQ SC has it. It cycled a mixture of brands and bullet types without fail, even with motley handfuls of ammo inserted into one magazine.

The trigger is pleasing and perfect for both protective and range work. Travel is minimal but present; the “wall” is consistently felt and easily passed. Reset is consistent and palpable. I love that this gun is ready to fire immediately upon reset, with no further forward travel required as with many other brands. 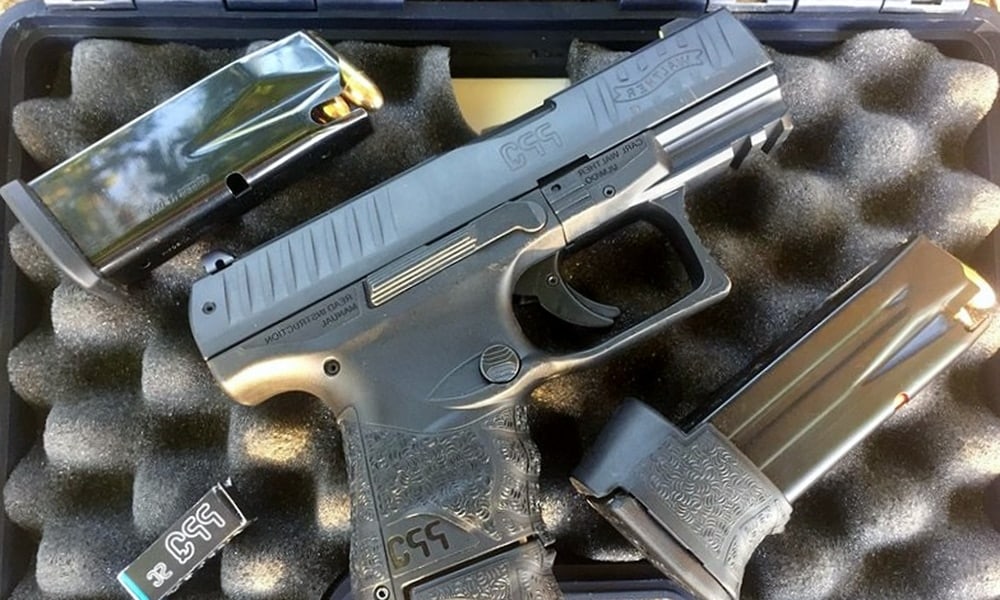 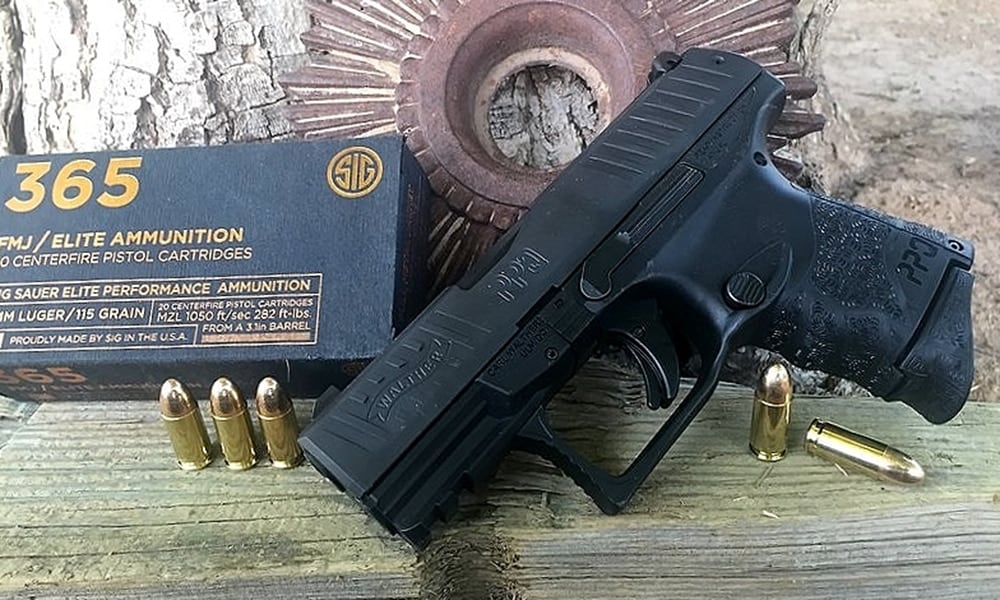 Many brands of ammo, including Sig Sauer’s new 365 FMJ cycled without issue in the PPQ SC. (Photo: Eve Flanigan/Guns.com)

The trigger has a safety block typical for the platform, and two built-in, internal drop safeties. I would feel entirely confident carrying the PPQ SC concealed in a proper holster, both for its readiness when needed and safety when not.

A formal accuracy test wasn’t conducted; I feel they’re mostly unnecessary for a self-defense pistol where slight deviations from “bullseye” may actually be beneficial in causing rapid hydraulic pressure loss on a threat. On a four-inch plate at 12 yards, point of aim equals point of impact. Nice and simple.

Walther Arms’ PPQ SC is a great, dare I say superior, choice for the shooter who wants one gun for both range and concealment. It’s also a friendly choice for small or hand-injured shooters, without compromising anything for larger and/or fully functional hands.  Left-handed shooters could be flat spoiled by this one in comparison to others currently available.

There will be those who say 9mm isn’t enough, and it’ll be interesting to see if Walther adds .40 S&W or .45 ACP to the SC lineup down the road. Since the full-size iterations of this pistol can be found in .45 ACP, .40 S&W, and even .22 LR, I’m optimistic about possibilities for siblings of the SC 9mm. 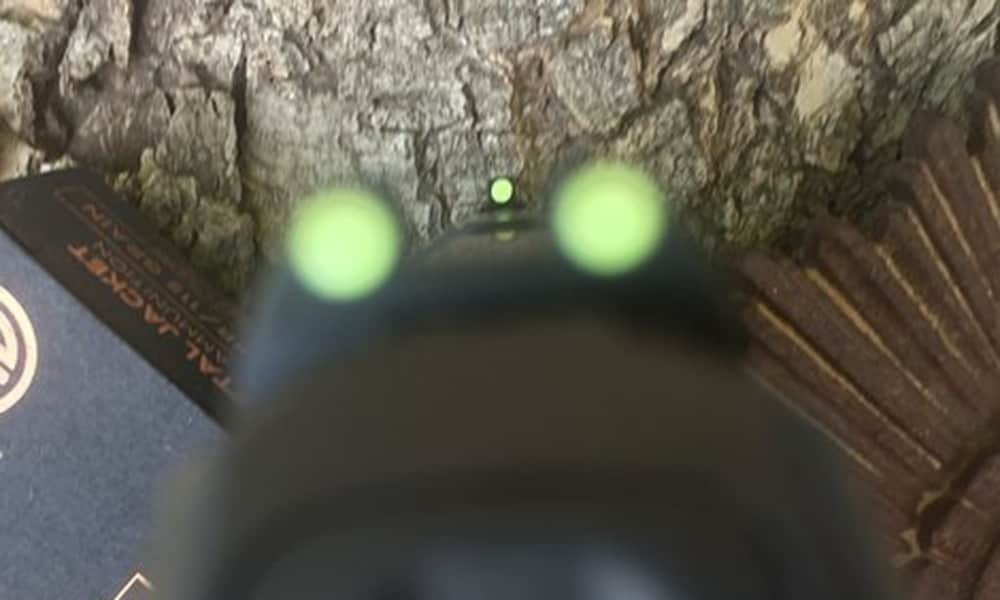 The gun is, in my estimation, on the chunky side. Though it’s not heavy, it would take some effort to effectively conceal its thick profile in my customary appendix carry position. However, that same thickness makes this sub-compact handle with ease.

For an easy, reliable, feature-packed firearm that can roll right from concealment onto the range, backed by a company that promises a 48-hour turnaround on warranty work, the PPQ SC is straight up reasonable. You can find this pistol with an average price in the mid-$600s, another great reason to own one.