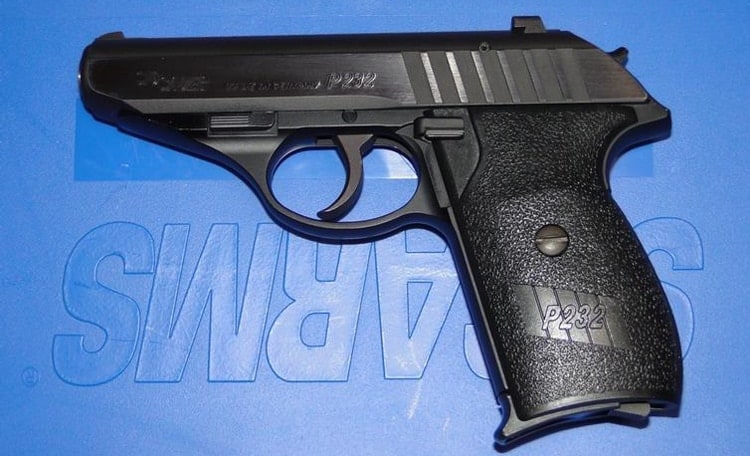 Look inside the case at your local gun store – you know the one – the one you usually ignore. The one bursting with cheap, used stuff, mostly a European blend of compact polymer pistols. Because you may find a diamond in the rough. The Sig P232 was one such pistol for me.

Made of a steel slide, an alloy frame and an extra helping of that Modern Art style, the P232 is a reliable, compact handgun for the modern gentleman.

The Sig P232 draws it’s lineage from the older P-230, which in itself comes from the Sauer 38H. The old Sauer 38H was a blowback pistol intended to compete with the Walther PPK and Mauser HSC handguns.

Due to Germany’s pressing need for every last handgun they could get their hands on in the Second World War, Sauer would produce the 38H until the factory was captured by the Allies in 1945. The Sig P232, carries on the legacy of the Sauer 38H in spirit, as it is very much a modernized variant of the old handgun. 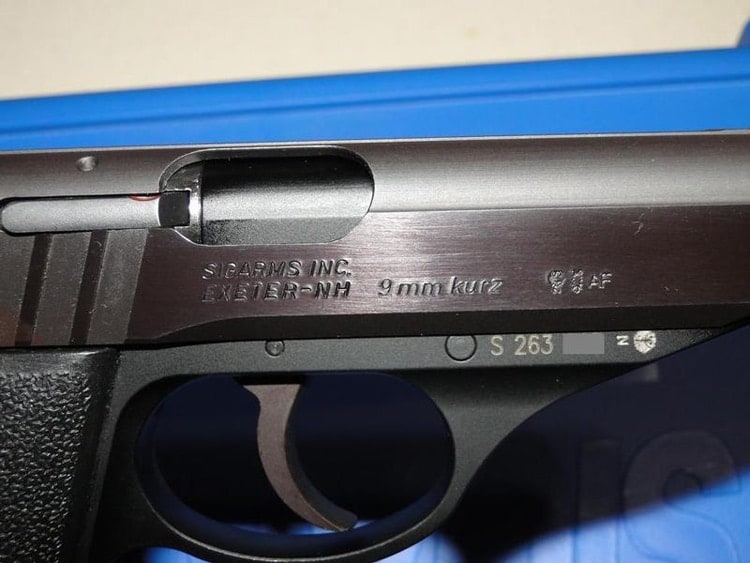 Doubtless it looked futuristic when introduced in the 1970s with its streamlined appearance, it now looks rather retro in form. The P232 is available in a variety of finishes including Sig’s matte Nitron finish, a stainless finish, and a two-tone finish.

Sig also once sold a variant with a blued slide, and a black frame. The grips shown here are thick wrap-around textured plastic, but currently the P232 is offered with rubber Hogue wrap-around grips. 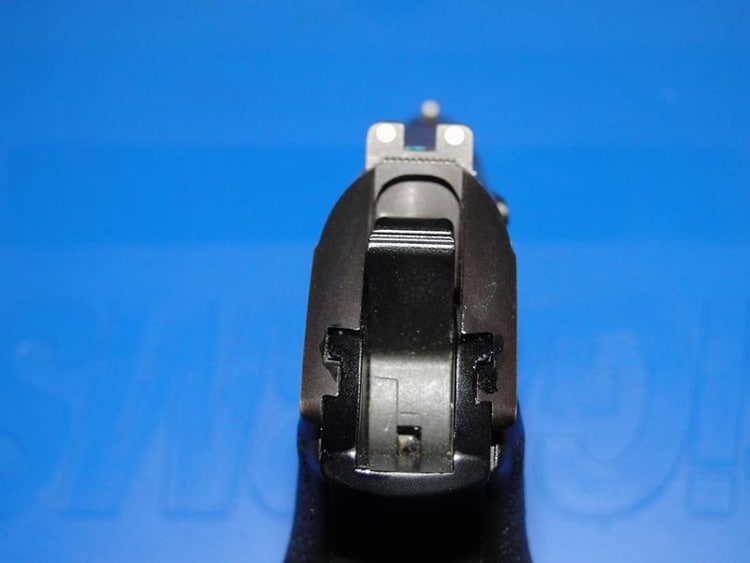 Calibers for this little blowback handgun include .380 ACP (or 9mm Kurz) and .22 LR. At one point it was also offered in .32 ACP. I know .380 ACP isn’t the most popular of cartridges in this era of extra hot ammunition, but a well made .380 ACP cartridge can still be an effective man stopper.

Numerous companies from Hornady to Remington and Federal all market a variety of .380 ACP defensive loads. Newer loads benefit from advances in technology and the experiences gained in manufacturing other calibers. 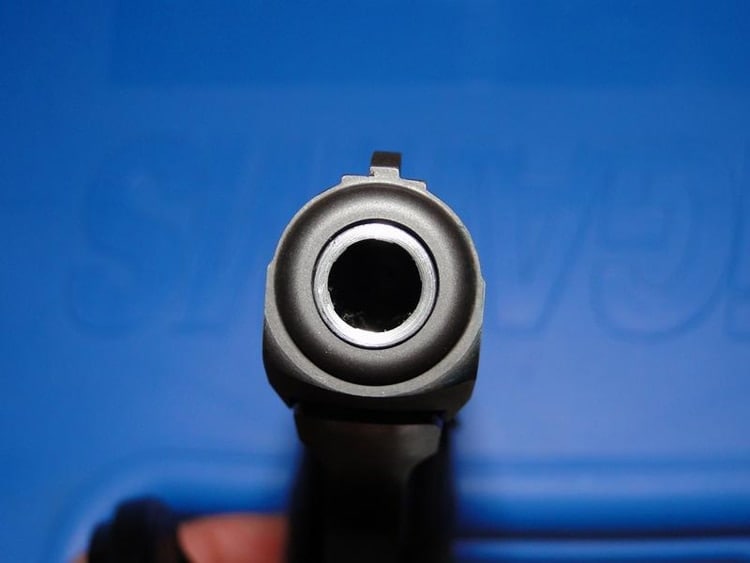 While most shooters would want more than 7+1 rounds of .380 ACP, the first rule of a gunfight is to actually bring a gun. The Sig P232 is also light enough to be carried comfortably, no doubt due to the .380 ACP chambering. 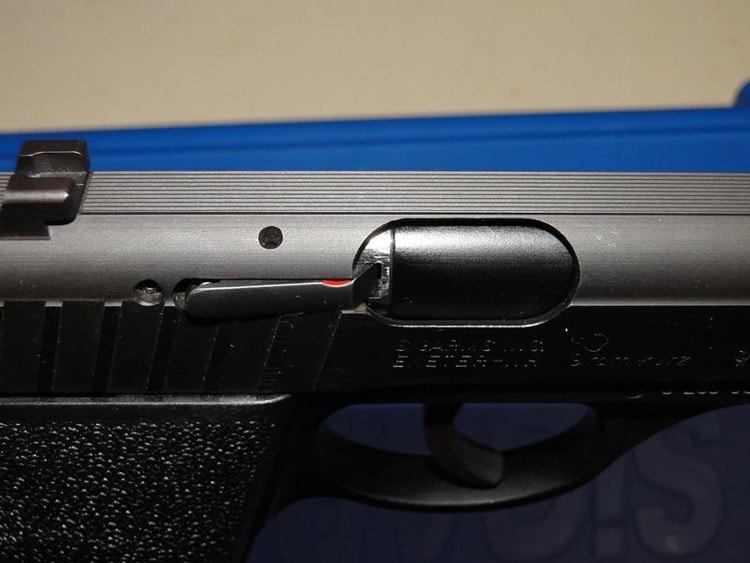 Sig P232 is considered by most a back up gun. (Photo: Gun Auction)

Flat controls prevent snagging on clothing when drawing, and they’re simple enough to operate. Standard for most Sig pistols there is a de-cocker instead of a safety, the hammer is shrouded to prevent snagging and has a small spur, and unlike most blowback handguns that require you to pull down the trigger guard to disassemble, the P232 has a lever on the side of the frame. The magazine release is a heel release style, like many older European designs. Awkward at first to most American shooters, it becomes second nature with practice.

As it is a fixed barrel blowback pistol, lengthy shooting strings can be a bit painful. Thankfully the grips are based off of high-end target grips made by Karl Nill. While the Nill grips are made of exotic woods, the P232’s thick, wrap around grips are textured and made of less-expensive black polymer.

While they aren’t made of fancy hardwoods, the grips help to fill out the hands, providing a greater level of control and comfort over most blowback handguns. The slide is also lighter than other blowback pistols, meaning less weight moving rearwards when shooting.

What also helps the P232’s accuracy are generously wide sights. White, three-dot sights are standard. The rear sight is adjustable for windage with a hammer and punch. The excellent wide sights, fixed barrel, and grips that fill out a shooter’s hand make for an excellent combination. These same attributes also make for a gun that can be brought into action very quickly. Whether you are drawing from a holster or an office desk, you can get rounds on target very quickly with this handgun.

It is often said that a machine is only as good as the sum of its parts. The P232 is made of excellent and reliable parts. While many will scoff at the idea of relying on a .380 for self-defense, the P232 makes a strong case for itself in this day and age. Its accuracy, reliability, and appearance make for a desirable handgun.