Odds are good if you’re a hunter, shooter or outdoorsman, you’ve given at least a passing thought to survival situations. And no good woodsman goes afield without a gun, though sometimes space and weight concerns are of the essence. Regardless of your level of readiness, budget and style, Guns.com has gone out and found three of the top packable bug-out bag guns for preparedness.

All three of the guns we’ve selected fit our criteria of being capable for both simple defense, sustainment hunting, stowability in a pack, weight and reliability. Here’s where we settled: Henry Repeating Arms AR-7 Survival Pack, Chiappa X-Caliber Set, and the new Midland Backpack. 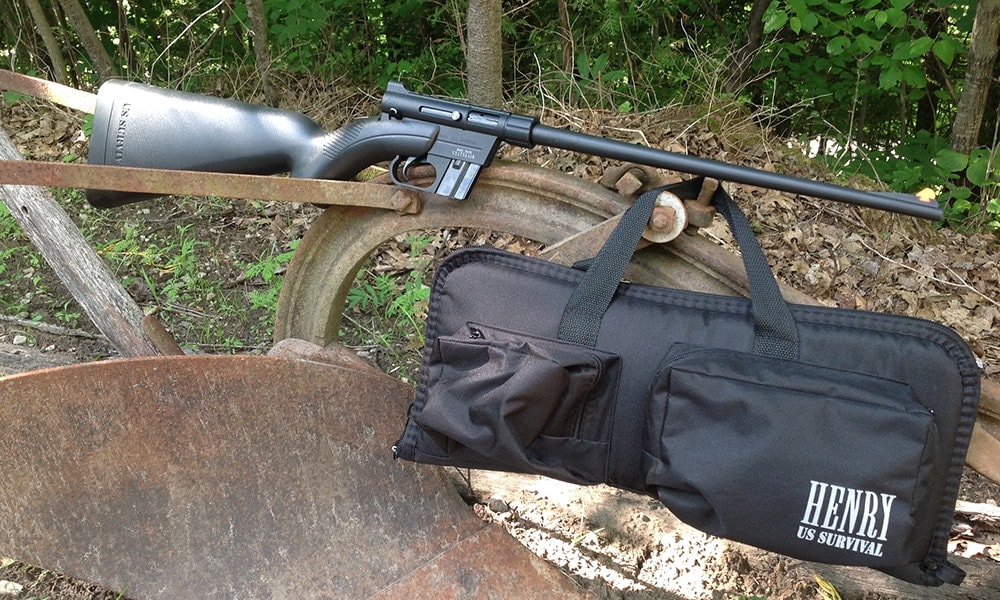 The Henry AR7 is by far the lightest and most packable of the three, measuring just 16” stowed in its own buttstock and 3.5 pounds. (Photo: Kristin Alberts/Guns.com)

For years, Henry Repeating Arm’s AR-7 Survival has been setting the standard in current production breakdown packable rimfires, and now the company is upping their game with introduction of the new bug-out ready Survival Pack.

So not only are we testing the semi-automatic rimfire rifle which packs completely into its own floating buttstock, but also the quality and usefulness of the contents of the kit. In addition to the standard two, eight-round magazines that normally ship with the AR-7, there’s much more to this box.

MSRP on our test US Survival Pack is set at $550, a jump of about $200 if you’re just buying the gun. That’s a tough upgrade sell, until you consider that the kit is already selling on line at various retailers for under four bills, and includes the aforementioned host of Made-in-America products. At 16 inches long when packed away and 3.5 pounds, it is both the lightest and most easily stowed of the three. 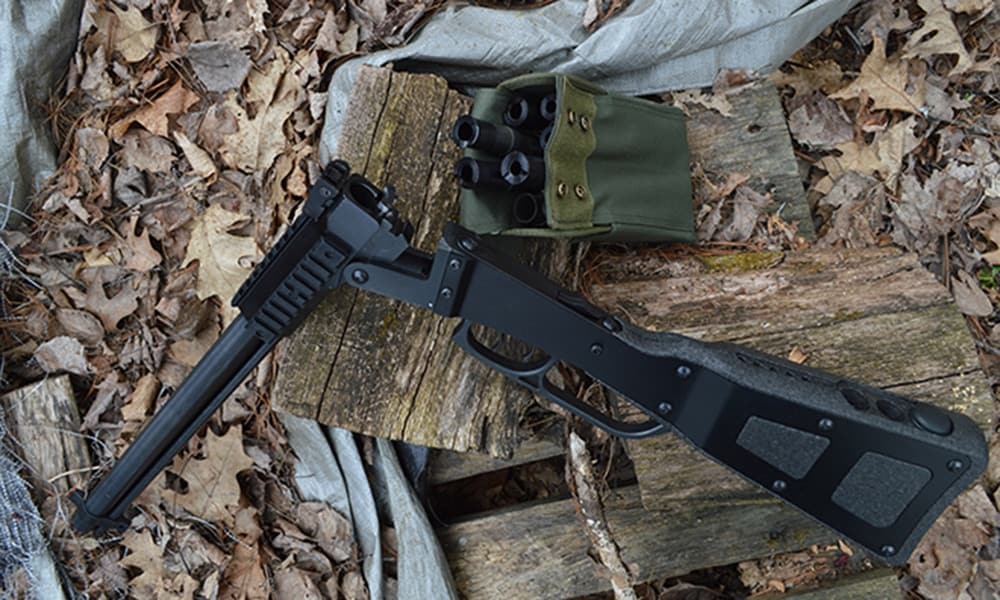 Our Chiappa X-Caliber is a Model M6 12-gauge smoothbore 3-inch chambered shotgun over a .22 long rifle barrel.  The barrel length of 18.5 inches makes it a wieldy weapon, even more so when folded nearly in half and measuring the same 18.5 inches.  When deployed, the gun’s overall length is 34.6 inches with a svelte traveling weight of 5.6 pounds. Though our test gun came with a .22LR lower barrel, a .22WMR version is also available.

The X-Caliber’s steel and polypropylene stock immediately set it apart in appearance with a love-it-or-hate-it reaction. The gun fires with double triggers and has dual extractors. The X-Caliber wears a fixed front fiber-optic sight and windage/elevation adjustable M1 style rear. There’s a top tang safety and three Picatinny quad rails for mounting optics and accessories.

What really sets the X-Caliber apart is what gives the combo-gun its name: the included pack of eight steel adapters allowing the firing of 12 different calibers. The set of eight adapters are as follows: .380ACP, 9mm, .357/.38SPL, .40S&W, .44 Mag, .45ACP, .410/.45 Colt, and 20-gauge.  The adapters come packaged in a portable, olive drab belt pack and drop quickly into the gun’s 12-gauge chamber. Point of accuracy changes slightly depending upon caliber of fire, but all are within killing range inside of 50 yards.

MSRP is a bit shocking at $949 for the Chiappa M6 combo gun with the full eight-insert caliber setup, but that does grant the shooter dozen-caliber shooting capability in a durable, packable firearm without the need to decide on rifle or shotgun. Wily shoppers will be able to find the setup available under $700 now that the X-Caliber has been on the market for a number of years. We’ve played around with the M6 and the adapters for several years now, and the durability is excellent. 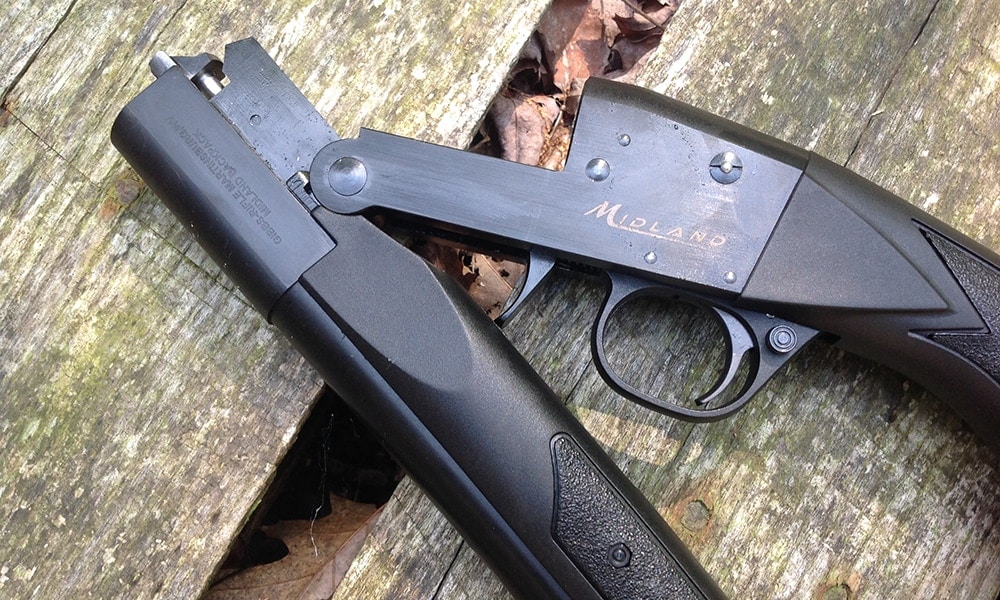 The Midland single shot breaks neatly in half, and at under five pounds, is easily portable. (Photo: Kristin Alberts/Guns.com)

Filling a niche vacated by affordable break-action, single shot, barrel-swappable long guns like the now-defunct H&R and NEF, in swoops a new company called Midland.  With ties to the respected Gibbs Rifle Company, Midland launched their first Backpack model shotguns in early 2018 to little fanfare.  In unassuming black polymer, the lightweight single shots fold almost completely in half and ship with one interchangeable Beretta-style choke. Retail is a shockingly low $149 regardless of bore choice, including multiple barrel-lengths, in .410, 20- and 12-gauges. A removeable buttpad allows stowage of small survival gear, while a pair of included LOP spacers allow for a more customized fit.

The Midland’s aren’t much to look at, and even less fun to shoot in a sub-five-pound 12-gauge, but they are affordable, get the job done, offer barrel interchangeability, and are easily stowable.  Folded length on our 24” twelve is only 24.4.”  Best of all, the company will be debuting both rimfire and centerfire rifle barrels by the end of the year, making this a legitimate combo option for backpacking.  The most heard complaint?  The Midland Backpack comes sans its namesake backpack, but I’m sure survivalists can simply drop the budget gun into their own bug out bag.

Regardless of your style or budget, there’s a packable survival gun within your reach. As the old saying goes, better to have it and not need it than the alternative. Any one of these three long guns would neatly round out a pack of emergency supplies in case of bug-out, natural disaster, or outdoor adventure.  Let us know which gun you’d favor if the SHTF!