Knowing what a fan I am of the Canik brand, the US TriStar rep asked if I’d like to test the latest, compact version of the 100 series, manufactured by Canik but branded by the importer, TriStar. Of course, I replied in the affirmative and the experience did not disappoint.

This Turkish 9mm walks a line between true double/single action and single action only. Like a 1911 (or CZ75), the hammer is placed in the fully cocked position upon loading. There’s a thumb safety on the left side, which unlike the 1911, blocks the trigger mechanism from inside only — there is no external slide/safety interface.

For an extra measure of safety during carry, the hammer can be put in half-cock to afford a somewhat longer trigger pull. Or, fully de-cock it for a true double action first shot. Unorthodox as these techniques are when compared to either the 1911 or classic DA/SA platform, they work.

The all-aluminum frame Is another marriage of old and new styling. At 37.3 ounces unloaded, it has a solid feel, and the full-length rails insure that there’s no noticeable barrel deviation when the slide is rearward. 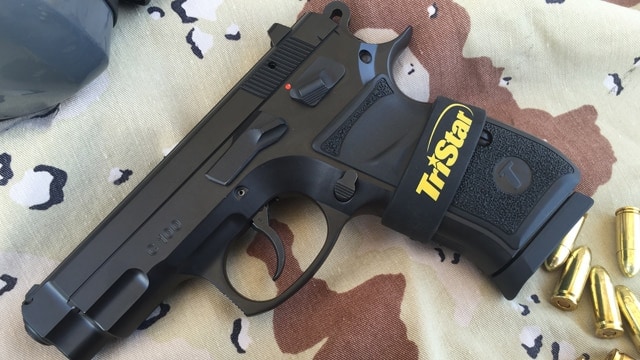 The TriStar C100 chambered in 9mm. The handgun is constructed of steel and aluminum, and has a magazine capacity of 15 rounds. (Photo: Team HB)

For all its steely qualities, the C100 has a gentler side, too. Between the sights, along the top of the flattop slide, are 10 finely machined grooves. In addition to being decorative, they serve to reduce glare. The front strap is also sculpted in this manner. Plastic screw-on grip panels are textured and adorned with the TriStar “T,” and feature user-friendly indents where the thumb and trigger finger rest. Along with the deeply cut beavertail, the grips make this gun manageable in smaller hands.

The barrel is just 3.7 inches long, and quite low profile. Between the weight of the frame and very low bore axis, recoil is minimal.

On the somewhat cheesy side, TriStar ships the gun with a rubber logo bracelet-style sleeve that fits over the grip. It may please those with very large hands and those who like a lot of grip traction. I found it distracting and removed it after a short trial — a personal preference.

The sights are very pleasant to use. The three-dot configuration is easy to put on target fast. The drift-adjustable steel rear sight has both a U-shaped setting and square opening between the dots. Although all three dots are identical in size, the setting of the rear sights inside the U and the slight forward cant of the front sight make for intuitive recognition of the front sight—it picks up light more than the rear ones. Out of the box, a centered six o’clock hold is what I found to be effective in hitting four-inch plates at 14 yards.

Unfortunately, the owner’s manual claims the sights are tritium, when they are not. In the market space where this gun lives, tritium is not a stock offering anyway.

For what it’s worth, there’s no loaded chamber indicator. Just press check and move on.

Cycling was reliable with Federal and LAX brand brass case and Blazer aluminum case FMJ as well as Precision Delta, and Team Never Quit frangible HP ammunition. When I first saw this gun, I thought that ejection might be a problem – the port is small, smaller than that on a Browning Hi-Power and more like—dare I say it—a Hi Point ejection port. My concern was for naught; the TriStar never missed a beat no matter the ammo type or brand.

The trigger is a long, curved affair with classic appeal. Here I found one of the few triggers I can operate in double action without hooking the first joint of my finger around it. In single-action, reset is clean and barely audible. Travel is appropriate for an experienced person’s carry gun, which is to say it’s there, but it’s not very long.

A funny thing happened at around the 50-round mark. Travel from reset to break got remarkably smooth. It had been, for lack of a better descriptor, a tad soupy but acceptable. After this little break-in period, the travel was silky smooth.

Releasing the magazine is a breeze with a well-defined and sizable, but not ambi, button. Mags fall freely away, loaded or not. The designers of the C100 have obviously paid attention to consumer desires in this regard.

Also riding the line between modern and traditional is the C100 takedown procedure. The hammer of the fully unloaded gun is placed in half-cock, and the slide must be inched rearward less than half an inch to align hash marks on the frame and slide. Holding it there, the takedown pin is pushed, 1911-style, to the left from the right, and pulled out from the left side. With that accomplished, the slide comes right off. The barrel, recoil spring and guide rod are all easily removed for cleaning. It’s an easy-enough process that will still make the 1911 fans feel like they’ve done enough work.

Leaning traditional is the fact that there’s no light rail. Those committed to having a weapon-mounted light will find easier pickings with another model. The lack of a rail preserves the slim, concealment-friendly profile. You can’t have it all.

Current real prices for the TriStar C100 9mm hover just under the $400 mark. It comes with two magazines, owner’s manual, cleaning rod and brush, lock, and loader, all in a hard-shell, padded case. Extra mags retail for around $18.

The TriStar C100 will please the traditionalist who wants a packable gun, the recreational shooter who likes a great DA/SA trigger, and anyone who likes a unique design without sacrificing good handling.