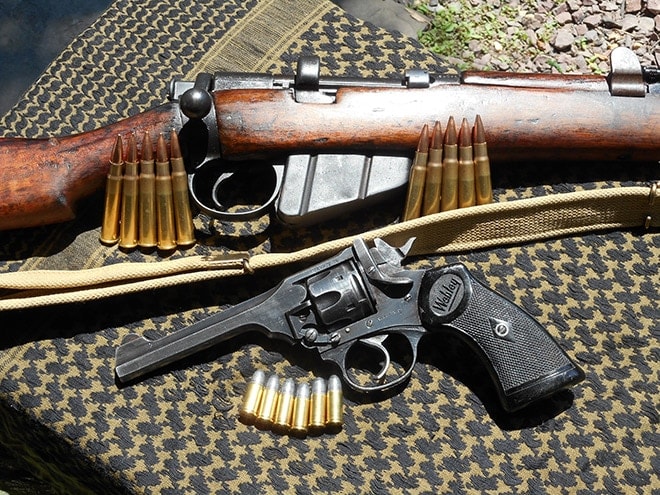 It’s a gun that should not exist or at least should not have been accepted into military service. It’s caliber has been called anemic, yet it was considered at the time of its adoption to fit the bill perfectly. It is a top-break revolver, widely considered to be an inherently weak design, yet it’s built like a tank. It is a revolver that I lusted after for years, the Webley Mk. IV-38.

Why did I want a Webley for so many years? Mostly for the looks. The Webley is certainly distinct when compared to the legions of Colt Peacemakers and S&W double-action revolvers I see in TV shows and movies. I also love it’s quick and efficient top-break loading system. And then there is the guns historical significance as a British service pistol. For a gun guy, really what isn’t there to love about the Webley Mk. IV-38? 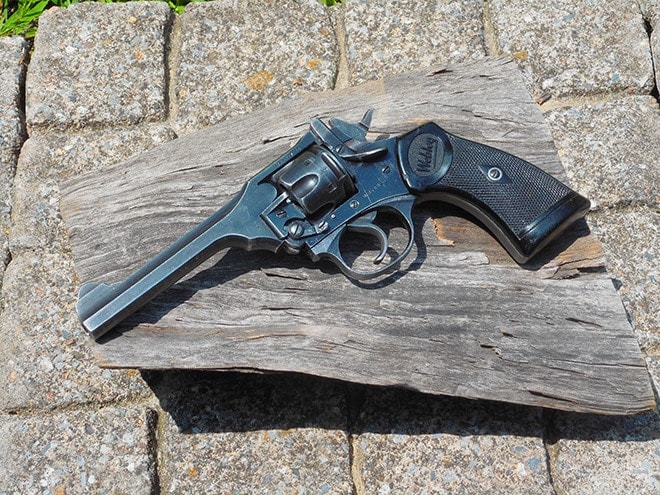 The British Army switched over from the massive .455 Webley to the smaller 38/200 (.38 S&W) in 1922 as the result of experiences gained in World War One. Midway through the war, what was left of the professional core of the enlisted British Army (when it was “nothing more than a travel agency for gentlemen with an abnormally high sex drive” as Blackadder would say) had been wiped out. Replacements had to be trained quickly and the heavy recoil of the .455 was detrimental to that effort. In the event of another war, the British Army felt that a smaller caliber would make training new officers easier. In tests the British came to the conclusion that a 200 grain slug, fired at a low velocity tended to tumble and fragment when it hit a target. It also minimized over-penetration, and transferred more energy onto the target. Best of all, it had minimal recoil. 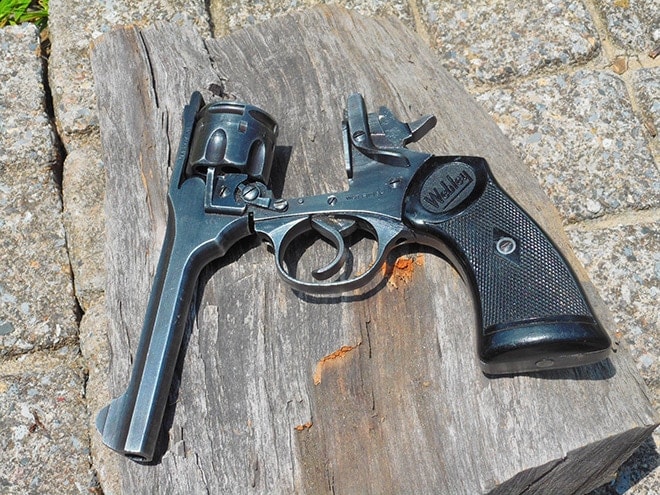 Why the British didn’t simply go with a heavy .38 Special round is beyond me though I suspect it would be some sort of Sisyphean task to navigate the maze of documents that may explain why. Whatever the reason, the decision to switch to 38/200 became an annoyance to American shooters as .38 Special is far more common than the .38 S&W. It also proved to be an annoyance to the British — just before World War Two, the 38/200 was believed to be in violation of the Hague Convention. Officials were worried the unjacketed lead bullet could be seen as expanding ammunition. It was switched over to a jacketed 178 grain which had a bit of a reputation for “icepicking” through targets and transferring very little of it’s energy. 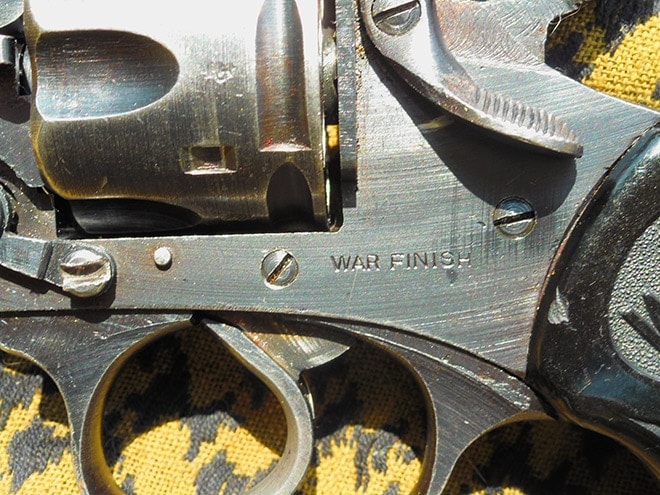 As I mentioned earlier, the looks of the Webley are what drew me to the revolver, though I would not say its appearance is very clean compared to Colt and S&W revolvers.  The size of the Mk. IV-38 is comparable to other service pistols of the time. Some examples will be marked “WAR FINISH”, as Webley didn’t have enough time to perfectly finish the metal or polish some parts. The cylinder retaining cam, latch, and cam lever are all exposed, distinguishing the Webley, and the shape and contour of the barrel help to give it a bit of a steampunk look. The grips are black plastic and emblazoned with the manufacturer’s name. The metal is blued. Milling marks are especially evident on top of the barrel.

Despite this production approach, the quality of the workmanship is superb. The grips and grip frame fit my hand like a glove. No other revolver — not the myriad of Colt SAA clones or S&W revolvers I’ve shot — fit my hands better than the Mk. IV-38. 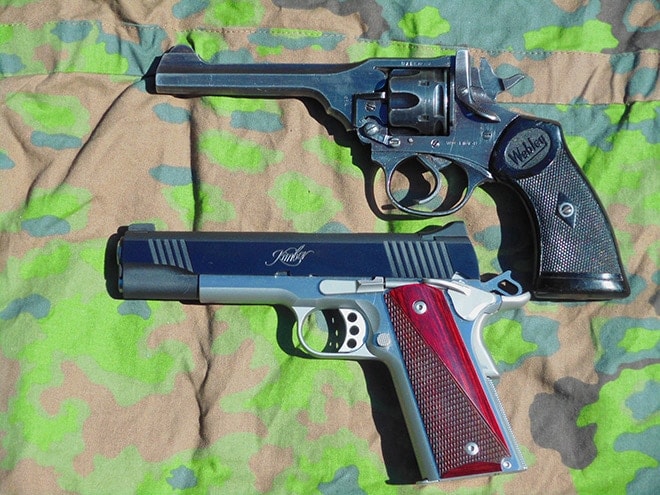 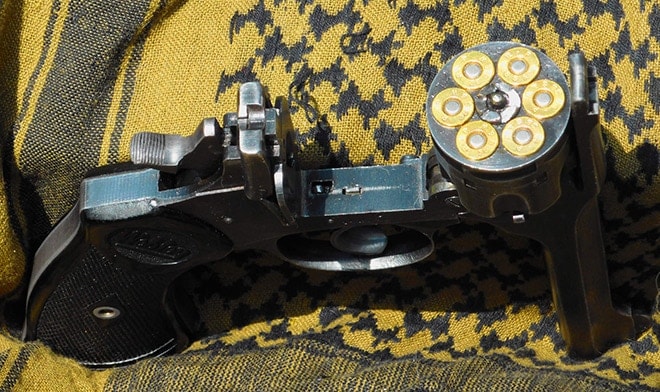 On the range, the Mk. IV-38 shows its heritage as a military pistol. The double action pull is monstrously heavy, but very smooth. The single-action pull feels to be around 5 pounds. Not the lightest, but there is still a crisp and clean break. The heavy trigger is there to help prevent any sort of accidental discharge.

The rear sight notch is fairly wide in comparison to many pistols of the era. Unfortunately, factory .38 S&W ammunition is light and underpowered compared to the military 38/200 loading of yesteryear. My shots consistently landed low and I wound up aiming high to hit the bullseye. Felt recoil is around the level of a .22 WMR and muzzle rise is minimal. However it’s all worth it, as breaking open the Mk. IV-38 to reload and watching the casings fly out of the cylinder is good fun. 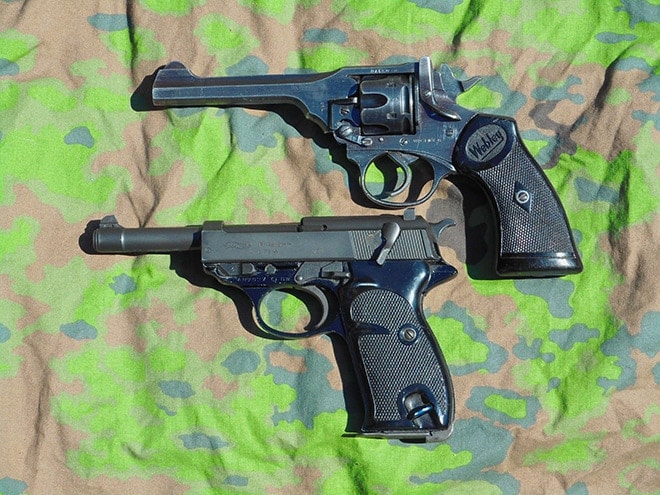 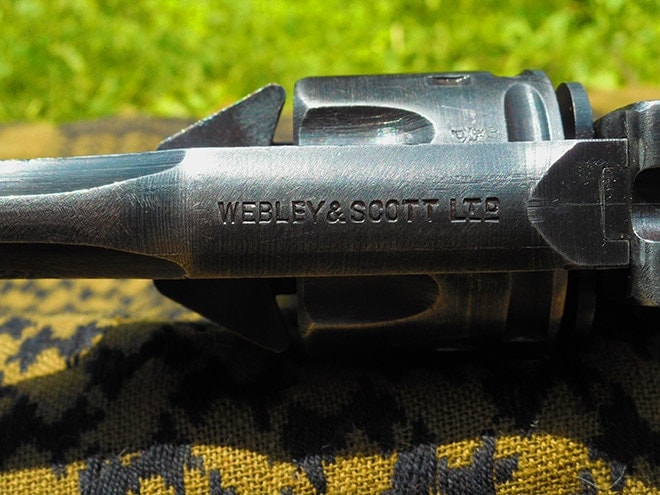 It’s not the most powerful of handguns and isn’t an optimal size for concealed carry. Buffalo Bore does offer a self-defense loading that they say is safe for Mk. IV-38 revolvers. It is however quite pricey.

It’s not a pistol with a 33-round magazine, but it doesn’t have to be. It’s a historical classic, a revolver seeped in history that proved itself on the battlefield. Its looks and manual-of-arms help it to stand out from the rest. And that’s why I love the old Webley. At the end of the day, all you have to remember is that Colt won the West, but Webley won the Rest.