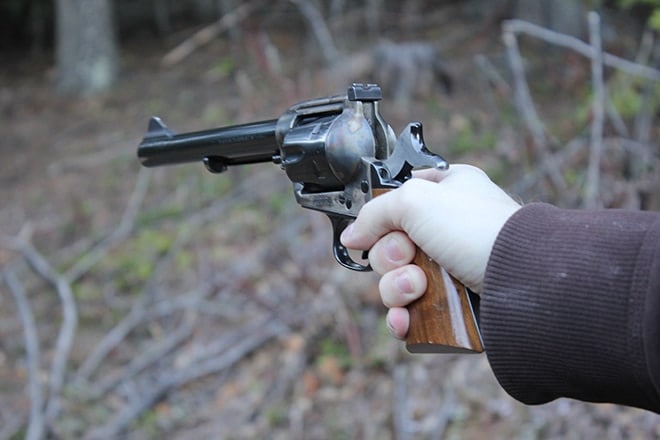 Although it’s over a hundred and seventy-five years old, the venerable Single Action Army design remains a real pleasure to shoot both in its original branded Colt form and in the many that have come after such as reproductions from Cimarron and Uberti or the popular Ruger Vaquero.  But there is one Single Action Army-type design that is often forgotten but no less of a delight to shoot: Interarms Virginian Dragoon. 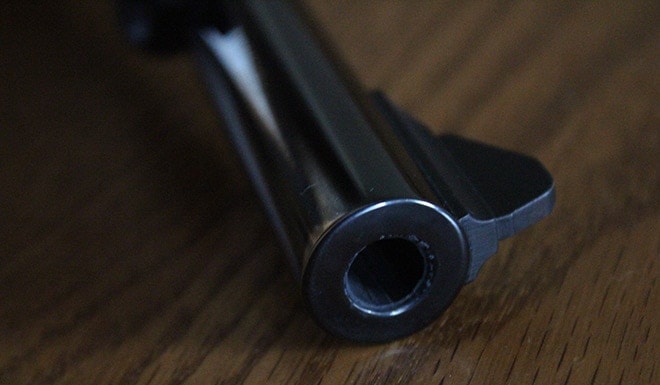 This model is a blued .357 Magnum equipped with polished walnut grips, a 7.5 inch barrel, and raised, adjustable sights.  At first look, the Virginian Dragoon is just like any other single action army revolver: elegant and beautiful.  The question really is, does this older single action design stack up to newer ones on the market?

But first let’s dive into a little bit of the history of the Virginian Dragoon.  This revolver was originally made by Interarms, an outfit once located in Virginia and who were at one time the largest privately owned distributor of firearms in the entire world.  Virginian Dragoons were built and sent from the assembly line between 1973 and 1984 and were offered in a number of different calibers and configurations. 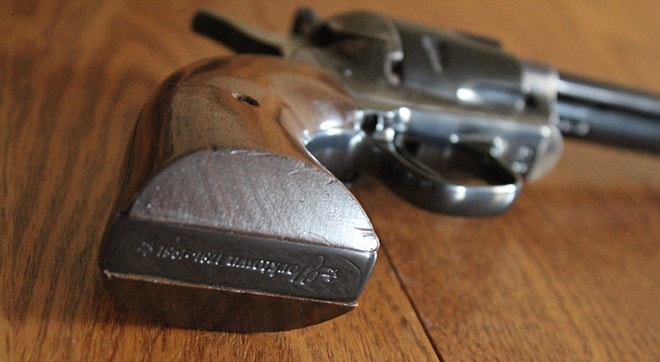 Interarms took great care to ensure that the Virginian Dragoon was as close as possible to the original Colt Single Action Army and its European replicas.  This meant that the frames were color cased hardened with a blued cylinder and barrel.

Nonetheless, Interarms’ did add some originalities of their own.  Like the original Colts, the Virginian Dragoon has the capability to be cocked halfway, but whereas the Colt and its replicas utilized a transfer bar to accomplish this, the Virginian Dragoon uses a long base pin that contains two latch positions.  On the first latch, if the hammer comes into contact with the firing pin, the gun will fire.  But if it is set to the second latch, the hammer is blocked from coming into contact with the firing pin. 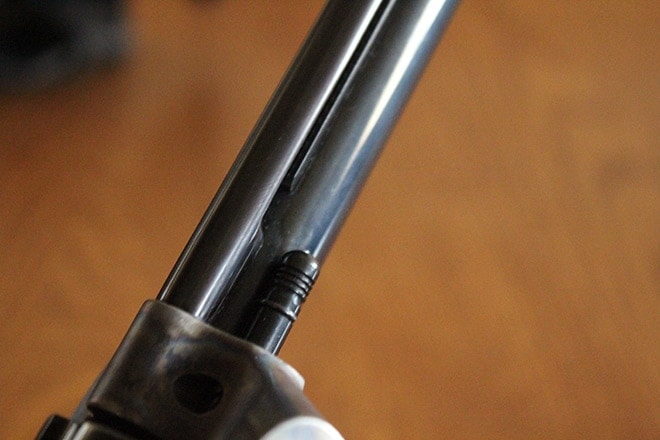 Thousands of Virginian Dragoons were produced during its production run, which effectively ended in the last quarter of 1984 with a few exceptions being built and sent off in 1985 and ’86.  While the Dragoon was a well made revolver, it faced significant competition from Colt, Ruger, Cimarron, Uberti, Freedom Arms, United Sporting Arms, and even Mossberg (who once made a single action revolver called the Abilene).  There simply wasn’t enough demand in the Single Action Army market for the Virginian Dragoon to find a place in the market.

Today, you can find a few Virginian Dragoons in a variety of models and configurations floating around in good condition at gun shows and gun shops.  Most of them are priced in the $500-700 range. 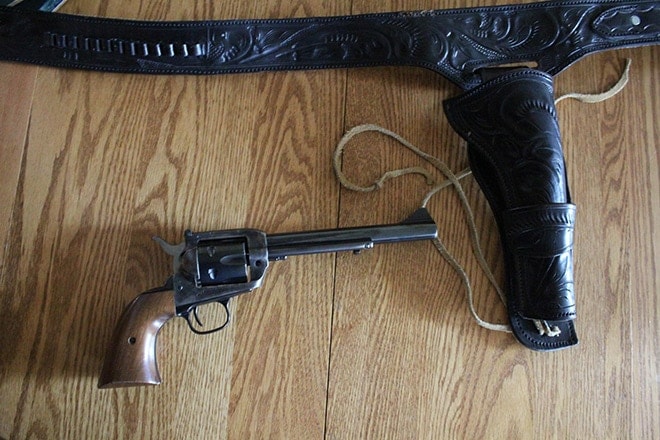 Drawing from a classic gun belt, like the one that came with my gun, is almost a must. (Photo: Nicholas Oetken)

When holding the Virginian Dragoon the first word that comes to mind is ‘robust.’  This is a very solid revolver with a tight cylinder and a smooth hammer pull, and it feels just like the original “Colt Peacemaker.”  This gun also came with a black leather gun belt and holster with thirteen .357/.38 cartridge loops on the side. Drawing and shooting the gun from this holster on the range is a lot of fun and there truly is an Old West feel to the Virginian Dragoon when you couple it with the traditional gun belt.

While the bluing is starting to come off from holster wear near the muzzle and on part of the cylinder, there’s no denying that the finish as a whole is top notch.  This gun is, at the very minimum, thirty years old and I’m actually surprised that more of the finish hasn’t worn off. 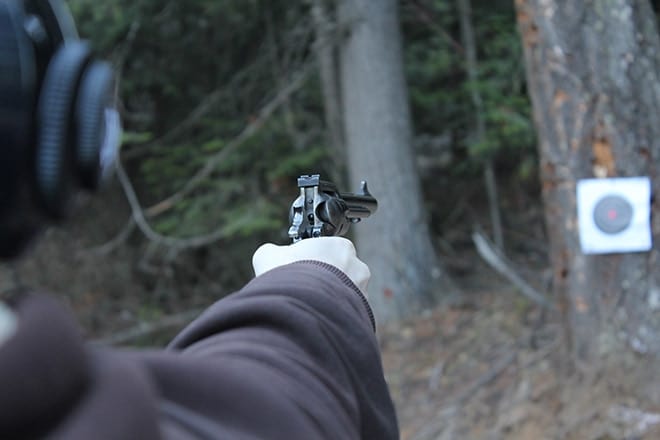 Accuracy for the Virginian Dragoon is easily its best feature. (Photo: Nicholas Oetken)

The Virginian Dragoon shines on the range. Accuracy is commendable and by far the best aspect of the gun, but here are a few other things that make this weapon a force to be reckoned with against paper targets and tin cans.  For one thing, the sights are excellent and easily adjustable.  The longer barrel also means that the bullet is delivered with greater velocity.  Single Action Army revolvers in general point naturally and the Virginian Dragoon is no exception.  Reliability in this revolver is excellent with no malfunctions of any kind throughout hundreds of rounds fired. 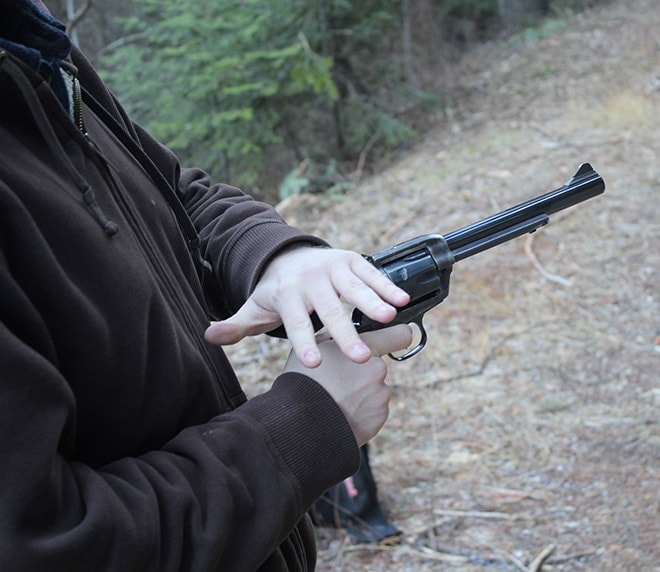 Single Action Army-style revolvers are all about fun on the range and the Virginian Dragoon is no different. (Photo: Nicholas Oetken)

The only problem I have encountered with this particular Virginian Dragoon is that the spent shells do not always completely eject when I push the ejector rod out.  It’s nothing a flick of my fingers can’t handle, but after a while it can become slightly annoying.

All in all, the Virginian Dragoon is a high quality revolver that will serve you well if you’re a single action revolver fan… but I admit I don’t know why you would want to spend money on a used revolver that isn’t produced anymore like this one when, for the same price, you can purchase a brand new Ruger Vaquero or Cimarron/Uberti reproduction.

Don’t get me wrong, I like the Virginian, but if I were on the market for a single action revolver myself I would likely spend my dollars on a new gun rather than a used one.  This is because even though the Virginian Dragoon has proven itself to be just as fine as any other reputable single action design, it doesn’t really offer anything extra that makes it stand out on its own.