The tagline says it all: “Yes, I’m feminine, but I pack a big punch.”  Weatherby is not new to the women’s rifle market, having debuted the Camilla Vanguard two years ago.  But with the new Mark V version, the company goes all-in on a fully-featured rifle built for women hunters by women hunters, without cutting corners or costs.  Is the Mark V Camilla all it claims to be?  Guns.com has the answer.

Joining the long and storied line of high grade bolt action Mark V rifles, the new Mark V Camilla is available in two variations.  First is the Subalpine, dressed in a hand-laminated composite stock with Gore Optifade™ Subalpine camo and barrel finished in Flat Dark Earth Cerakote.  Second, and certainly the most recognizable, is the Mark V Camilla Deluxe with its AA Grade Fancy Claro walnut and high-luster blued metalwork.  The models come in with MSRP’s of $3,000 for the Subalpine and $2,700 for the Deluxe.

The same specs define both rifles, for starters there’s the hand-lapped 24” chrome-moly barrels with a field crown.  A cocking indicator comes standard, as does a fairly short 54-degree bolt throw.  There’s an internal recoil lug and aluminum bedding block.  Like its earlier predecessor the Vanguard Camilla, our Mark V Deluxe is defined by it’s similarly shaped, though upgraded stock.  The raised comb Monte Carlo stock was designed by team of women hunters led by Brenda Weatherby.  Their input helped determine what would properly fit the contours of a typical woman’s body, including a grip angle that is ergonomically altered and slimmed, with a gentle trigger finger guide groove.  Likewise, the shorter, trimmer fore-end is easy to wield for smaller hands, while a slight right-handed palm swell is friendly, albeit not for lefties.  The 13-inch length of pull is plenty short, with the gun coming in at 43.5 inches overall.  Camilla rifles are named after the “First Lady of Weatherby,” company founder Roy Weatherby’s wife.

The new Mark V version comes in a greater number of–and more interesting—calibers.  Whereas the Camilla Vanguard’s launch was limited to .243, .308, and 7mm-08, with 6.5 Creedmoor added later. The Mark V has come out with chamberings in .240 Weatherby Magnum, .270 Win, 6.5 Creedmoor, .308 Win, and 30-06.  While the Camilla Vanguard is a fine and capable rifle, it also looks and feels like any other budget rifle but with the woman’s-style stock. It’s also priced higher than other Vanguards at $849. 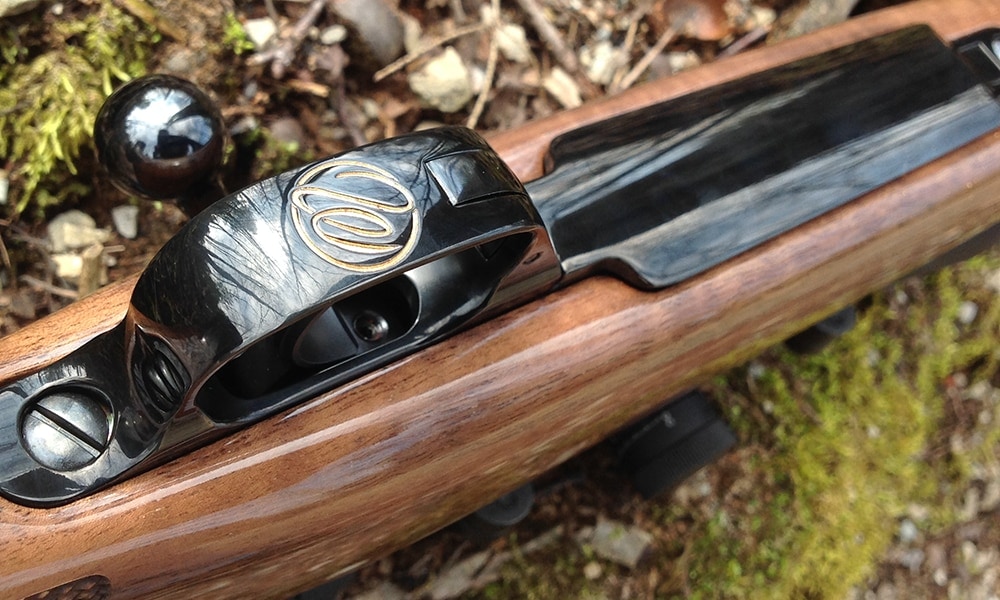 The high-lustre blueing of the Mark V Camilla is a sight to behold, while the gold inlay of the Weatherby “W” is the finishing touch on all Mark V models. The drop-away baseplate shown here also serves as a quick means of unloading the rifle. (Photo: Kristin Alberts/Guns.com)

Then you pick up the Camilla Mark V and say, finally, somebody has made a serious, attractive, fully-featured hunting rifle for the ladies.  It comes at a financial cost, but at long last, it’s here.  The 24-inch barrel wrings greater ballistics from the chamberings, whereas the Vanguard was limited to 20-inch barrels.  The Mark V has the superior six-lug action, fluted bolt body, LXX premium trigger, and a sub-MOA guarantee, all trumping the Vanguard.  The Pachmayr Decelerator recoil pad is an upgrade as well, not to mention the overall fit and finish.

A gun can look good and have all the features, but it takes performance to be a success, and that’s where the Mark V Camilla proved itself to be the complete package.  Our trigger broke just a hair over 3.5 pounds on a Lyman digital gauge. It was crisp, clean and a breath of fresh air on a rifle marketed to women not including simply average features.  Paired with a Leupold VX 3i 4.5-14×40 in Leupold rings, this is one accurate, durable, and ready hunting companion.  Heck, the company limits its marketing to women, but I can vouch that more than one fella on the range not only found our Camilla Mark V an attractive gun, but an accurate one as well.

We fired a combination of premium ammo, partly because that’s what the company suggests for the sub-MOA guarantee, and mostly because that’s all the factory loads we could procure in short order.  All three ammunition selections: Weatherby Plus, Weatherby Select Plus, and Nosler Custom produced repeatably sub-MOA groups, with the best three shot group from Nosler Custom 100-grain Partitions at 0.55 inches at 100 yards, and all firing well under MOA. 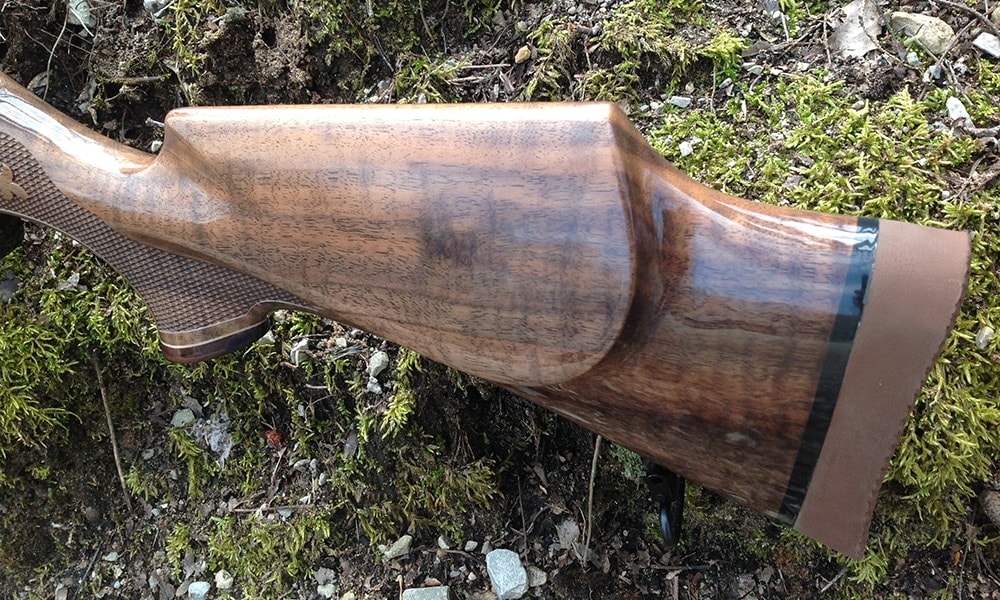 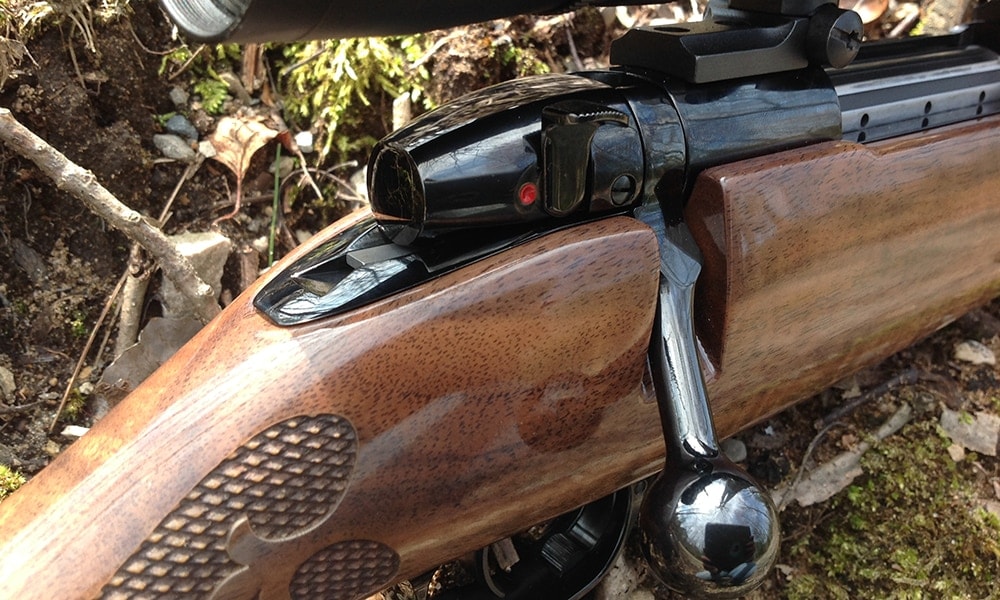 The 54-degree bolt throw of the Camilla is smooth and easy, while the six-lug bolt can handle heavy calibers with ease, and is a major upgrade over the Camilla Vanguard. The right-sided thumb safety, shown here, is easy to actuate in the field. (Photo: Kristin Alberts/Guns.com)

The .240 Weatherby Mag Deluxe model weighs in at six-and-a-half pounds empty, while the Subalpine models shave even more weight at 5.75 pounds.  With a scope, mounts, and sling we were just shy of 8 pounds, which was still plenty manageable.  Our .240 Weatherby Mag chambered Camilla holds four rounds and loads quickly, though we did experience a few hiccups while unloading through the trap door as the polymer follower had a tendency to hang up on occasion.  With some repositioning and practice, we were able to get it to clear with reliability.

From a woman who owns and shoots plenty of “male” rifles, the build on the Camilla takes some getting used to with the slimmer and shorter stock, but I know many women who fell in love and instantly felt comfortable putting this gun to their shoulder. The shorter grip-to-trigger reach is a big plus for smaller hands, and the rifle is easy to carry and fire in the field.

With an extraordinary fit, finish and appeal, with accuracy and performance to match, what more could we wish for?  In this case, we were overjoyed to see Weatherby finally include one of their own Magnum chamberings in the Camilla with the .240, but that joy turned to sorrow to find the beloved .257 Wby Mag was not on the list.  The .240 is a light-recoiling performer, but ammo is tremendously more expensive and difficult to source; while the .257 in my humble opinion, is one of the best all-around calibers for American hunters.  From a caliber standpoint, it is difficult not to want a Weatherby Magnum chambering in a Mark V rifle, and for that reason, I chose the .240.  There’s much more bark than bite in recoil, with the only downfall being availability and cost of factory ammunition, but the accuracy was exceptional. 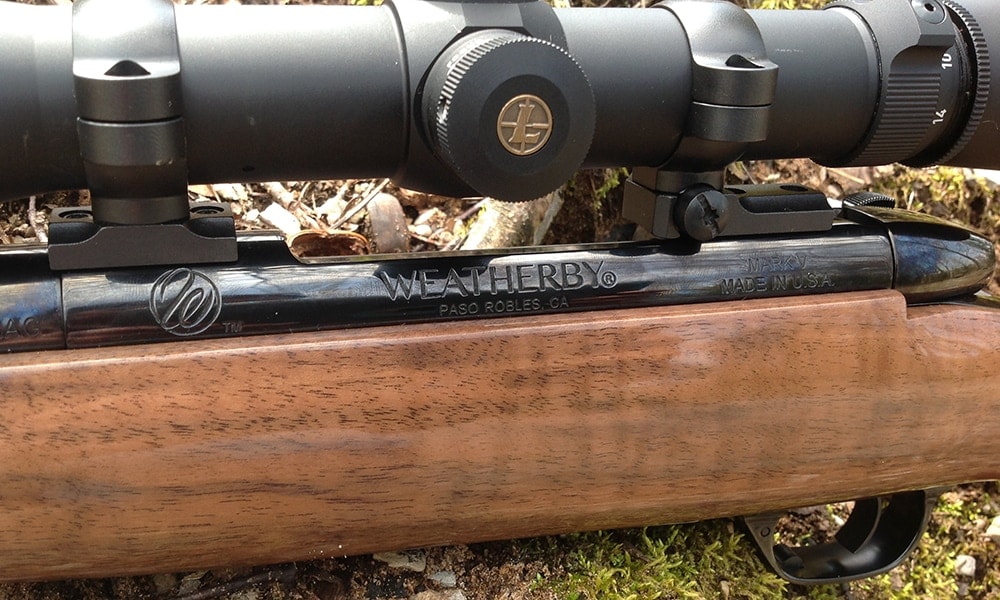 We topped our Camilla Mark V with a Leupold VX-3i optic in Leupold mounts for ultimate accuracy testing. Note the Made in the USA and Paso Robles, CA rollmarks. With the company’s ongoing move to Wyoming, that’s sure to change. (Photo: Kristin Alberts/Guns.com)

Only time will tell how the overly slim stock, especially the thin wrist, will hold up to the more stout recoil of the Mark V’s calibers. The only other strike on this otherwise fantastic rifle is cost.  Good gear costs money, and there’s no doubt this is yet another lifetime rifle from Weatherby, though we do hope to see real-world costs come down, as this is a rifle I’d like to see in the hands of more women hunters.  The Mark V Camilla is a gun to get excited about.

The wood on our test Camilla Mark V is exceptional, with a nice gloss.  It stacks up well quality-wise when compared to other Mark V’s I have owned and loved.  The 24-inch barrel is a great improvement over the short-barreled Vanguard Camilla.  Just because many women are smaller of frame does not mean they deserve a lesser gun shorter on features.  The quality trigger, accuracy, and fit-and-finish on the Camilla Mark V is high class for discerning huntresses. 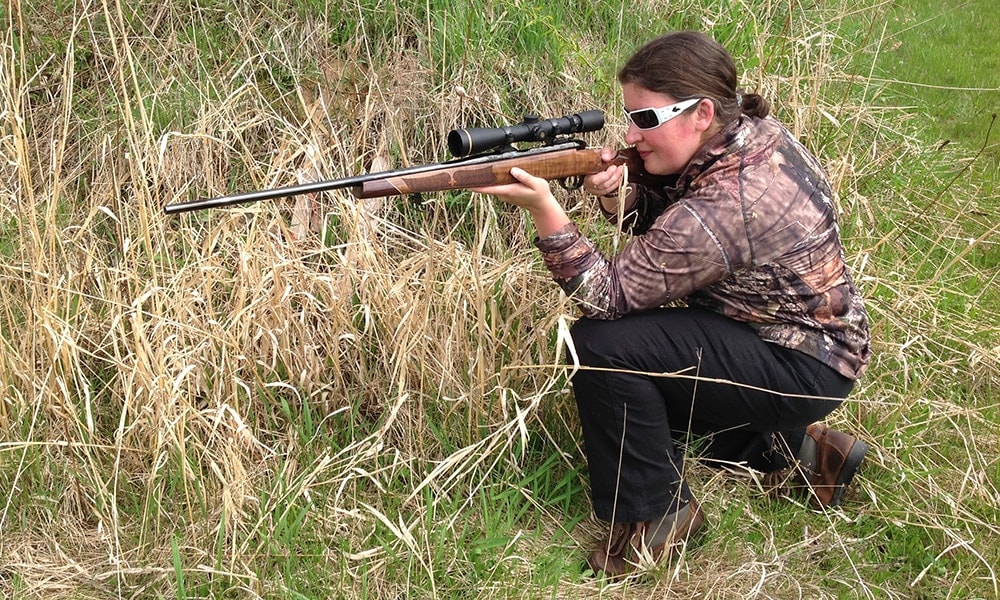 The author found the Camilla Mark V a joy to fire not only from the bench or sticks, but also from practical hunting positions. (Photo: Kristin Alberts/Guns.com)

The Mark V Camilla is a tall drink of water at $2,700 retail on the Deluxe and even more for the Subalpine. However, buyers who pony up the money receive a lifetime rifle with trademark Weatherby quality, accuracy, and attention to detail.  If all the features and the highest quality are not paramount, the Vanguard Camilla offers a similar build for women in a perfectly capable rifle as well.  Purchasing either the Camilla Vanguard or Camilla Mark V, means joining the sisterhood Women of Weatherby, a group of lady-hunters who are passionate about the outdoors, hunting, and conservation.  Whether you believe in a women-specific hunting rifle or not, major props to Weatherby for putting forth the first fully-featured, serious factory hunting rifle for the modern huntress.