In the market for a reasonable .357 magnum revolver? Taurus four ways 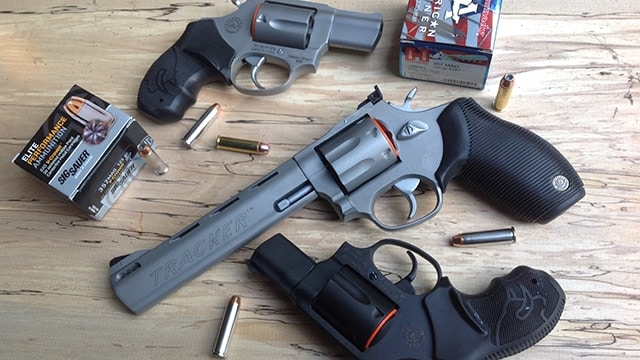 New cartridges come and go, but several, like the .357 Magnum, have withstood the test of time as a beloved, controllable, and capable revolver round. While higher-end guns like Smith & Wesson, Dan Wesson, or Ruger may be out of the price range for many entry-level or lower budget shooters, Brazilian-based Taurus has hammered out a name for themselves in the reasonably priced revolver market—with not just one, but at least four viable .357/.38 SPL wheelguns. 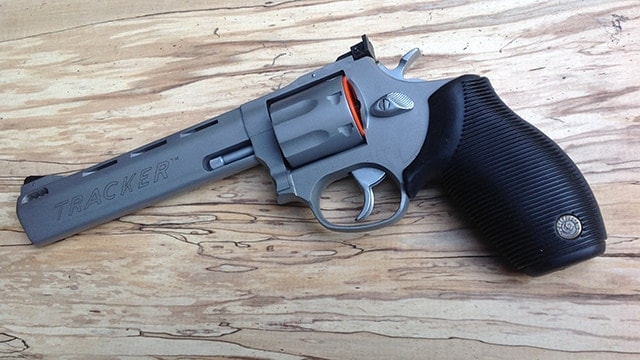 The Taurus Tracker platform is an affordable entry into hunting revolvers, here in .357, but also .44 Magnum (Photo: Kristin Alberts)

Taurus Tracker 627
The ribbed and ported barrel of Taurus’ Tracker line of wheelguns has become its calling card. Combined with a buy-me-now price tag and a line of appealing calibers, the Tracker has been a stalwart of the company’s lineup for years. The .357/38 version is certainly one of the most popular. The seven-shot stainless 627 Trackers, with their $705 MSRP, are readily available brand spankin’ new around the $400 mark. 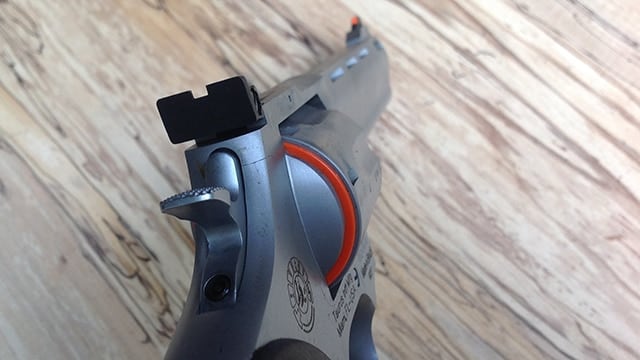 The Tracker is available in either a plain four-inch or ribbed 6.5-inch barrel version, with a fully shrouded ejector rod. It’s a viable blend of hunting revolver, sidearm, and range plinkster. With a stainless frame and empty weight of over 40 ounces, recoil is more than manageable, and the adjustable rear sight makes 50-yard accuracy a genuine article. Furthermore, the gun is plain enjoyable to shoot, whether practicing with high-octane hunting loads or introducing a newer shooter with the lighter-recoiling .38 Specials.

The 627 Tracker, along with its bigger brother Tracker 44, lead the way in lower-priced, medium-sized game hunting revolvers, while both the Tracker .17 HMR and Tracker 992 in .22LR are favorites of small game hunters. 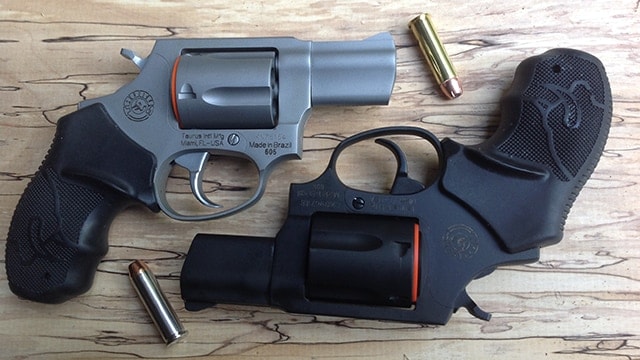 The pair of Taurus’s budget 605 snubby wheelguns in .357 Magnum, one brushed stainless and the other matte blue. (Photo: Kristin Alberts)

Taurus 605
The Taurus 605 line of snub-nosed .357/.38 revolvers are at top of the affordability-meets-concealablity list, making them instantly appealing as a combination carry gun, vehicle defense, and a hunter’s backup arm. The five-round DA/SA wheelgun with a two inch barrel is finished off with comfortable-enough, new style Taurus-logo rubber grips and fixed sights. MSRP on the standard, blued Model 605 is a scant $374, with real world prices often at or below three bills, something mostly unheard of anything other than a rimfire or .38.

While the trigger is nothing to write home about, you’d be hard-pressed to find that in a carry revolver. Though some larger-handed shooters may have issues getting all four digits wrapped around the smaller grips, the tradeoff is a deeply concealable and lightweight companion at 24 ounces and just under 6.5-inch long overall. Accuracy is no better or worse than one would expect from a gun this size, with home defense accuracy more than achievable. Though defense .357 Magnum loads are a handful in any small revolver, the big plus to the 605 is having the option to fire either .357 or .38SPL, from a revolver of this stature and cost.

The 605 variants include a matte stainless version as well as a pair of lighter weight, albeit spacey looking Polymer twins, all with a suggested retail price only slightly higher than the standard blued 605 at $390. 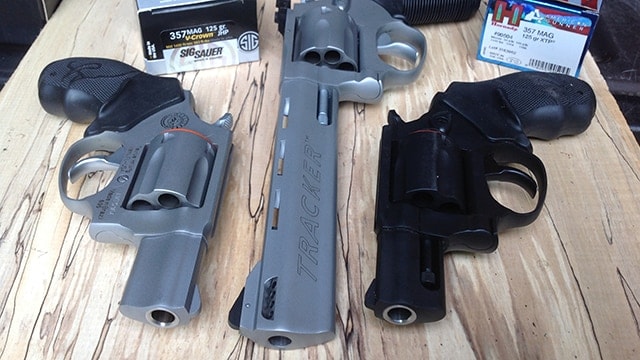 Taurus 608
If five rounds and the short barrel of the 605 doesn’t trip your trigger, the Brazilian-based company also offers a lesser-known, but bigger-business Model 608. As we have realized now from the final digit of the model number, the 608 naturally holds eight rounds of either .357 or .38SPL. To pack the extra firepower, Taurus builds the 608 on a larger frame with adjustable rear sights, a beefier grip for the larger-pawed shooters, as well as hand-fit actions.

Both the four- and 6.5-inch barrel lengths come factory ported, and with the heftiest weight of the bunch at over 52 ounces empty, this is a wheelgun with more serious, less concealable intentions. Its $729 MSRP makes it the steepest of the Taurus bunch, putting it more into competition with the bigger manufacturer names and making it one of the lesser known, though no less capable options. 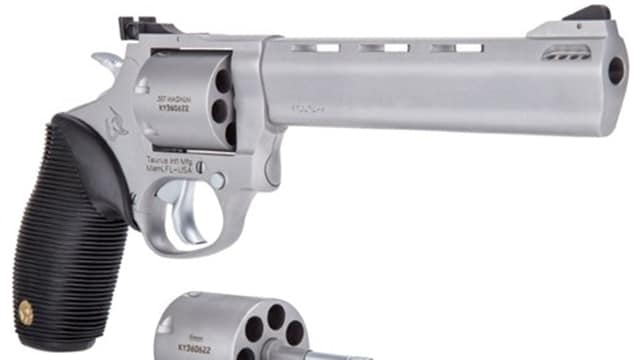 Taurus 692
News of the Taurus 692 comes hot off the presses, as their first true multi-caliber revolver capable of firing .38SPL, .357 Magnum, and 9mm from the same gun. Though the Model 905 has been around for some time as a 9mm only snub-nosed revolver, the new 692 does it all in one clean package. The seven-shot, matte stainless is expected to ship later this year in both three- and 6.5-inch barrel lengths, complete with porting, ribber grips, and adjustable sights. The package including both cylinders, as well as the company’s “Stellar” moon clips for the 9mm round, is set to retail in the realm of $660. As we have not yet handled the 692, we are unable to speak about further details or accuracy.

Conclusion
Taurus may not be the name most folks recall when thinking of guns passed down through the generations. But at the price of these revolvers, the quality for the cash is a win, and one hunters and shooters won’t be afraid to take into the woods, stuff into the backpack, or tuck into the truck. With Taurus’ Unlimited Lifetime Repair Policy on all Taurus-USA styles, shooters can let loose with less hesitation. With styles, options, and finishes aplenty, there’s a Taurus .357 for every taste and budget. 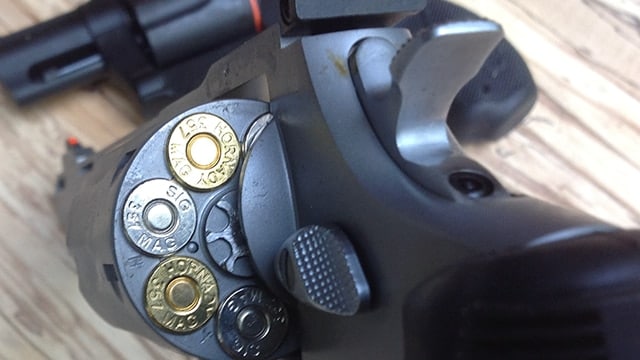