Is the Ruger GP100 Match Champion better than a Smith & Wesson? (VIDEO)

People have regarded Ruger’s double-action revolvers as a “working-man’s gun.” They are affordable and indestructible, but not always as pretty or polished as their Colt or Smith & Wesson counterparts.

With Colt no longer manufacturing new double-action revolvers, shooters who want quality revolvers must choose between Smith and Ruger. In the past, shooters who wanted an heirloom piece or a real tack-driver would have to spend nearly double the price of a Ruger, on a Smith. The folks at Ruger, having seen unparalleled growth in recent years, have decided to give Ruger enthusiasts and target-shooters on a budget an affordable, tank-like match-grade DA revolver. 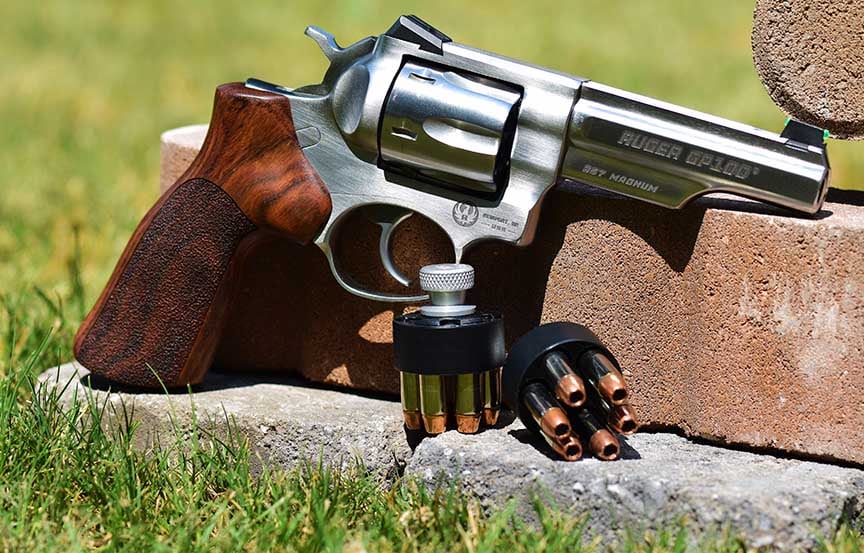 When it comes to accuracy, a revolver’s barrel is the foundation of performance. The Ruger GP100 comes equipped with a 4.2 inch, slab-sided bull barrel. It’s an excellent balance between heat absorption and weight. In other words, the gun’s heavy barrel will eep groups more consistent during repeated firing, since it takes longer to heat up. Furthermore, the slabside cut brings the point of balance closer to the shooter’s hand to reduce fatigue during extended firing sessions. 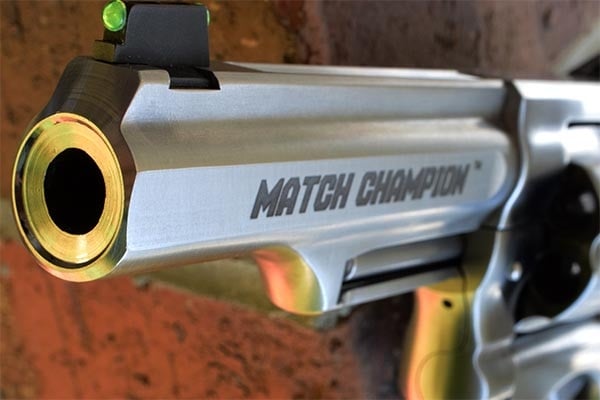 The king of GP100’s has a beautiful crown. (Photo by Jim Grant)

This Match champion is king of Ruger’s DA six-guns and like any royalty, needs a crown. Thankfully, Ruger has adorned its new wheel gun with an industry-standard 11-degree target crown to protect the muzzle and aid in accuracy. A well-designed crown is crucial not just for providing accurate fire, but for maintaining it.

I found the Match Champ to be extremely accurate with .357 Magnum loads ranging from 130 to 180 grain, and slightly less so with all but the heaviest .38 Special rounds. In both cases the gun’s heavy contour barrel and all-steel construction aided in recoil absorption, taming the otherwise painfully stout 180-grain hardcast planet-slayers. The GP100’s barrel upgrades aren’t limited to bullet-interaction, they also include new more user-friendly sights. The Match Champion sports a Novak low-profile triangular rear sight and a green fiber-optic front sight — a solid balance between speed and precision. As a tremendous proponent of Novak sights, this is a welcome addition, though I initially had my reservations about cutting into the top-strap of the revolver so aggressively. 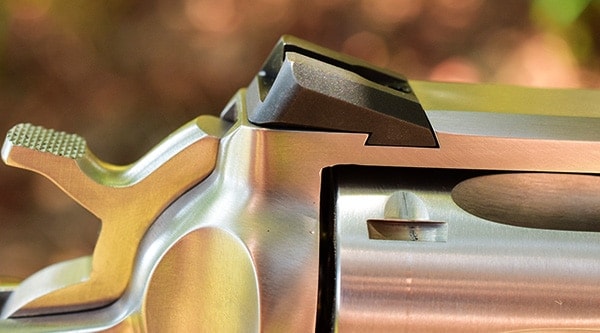 I contacted Michael Smith, a Ruger engineering project leader familiar with the design, who admitted that he shared my concerns, initially. Nevertheless, after numerous computer simulations and tens of thousands of test rounds, the GP100 showed no signs of undue frame degradation, Smith explained. Users who manage to damage their Ruger frames should count their lucky stars, the kind of abuse required to cause a catastrophic failure on a GP100 is enough to cause fragmentation on their competitor’s designs.

I also had a chance to talk to the Ruger Engineers about internals and we spoke about the synonymic nature of the Ruger brand and solid construction, but not butter-smooth triggers. The engineers assured me that the Match Champion differs from standard GP100s internally and that Ruger polishes every bearing surface to provide the shooter with a much more pleasant trigger-pull.

While the barrel is the most important mechanical aspect of a revolver, the shooter is the most important biological aspect. Meaning, no barrel will be accurate enough to compensate for a shooter wrestling with uncomfortable grips. The GP100 Match Champion ships with stippled wooden Hogue grips, absent any form of finger-groove. I’m sure some of you are frowning because you love your finger-groove grips, but these are ill-suited for shooting a revolver quickly. In fact, no high-level competitive revolver shooter uses anything but grooveless grips. My personal favorite are Pachmayr Presentation grips, which, ironically enough, are as ugly as sin, but extremely functional. 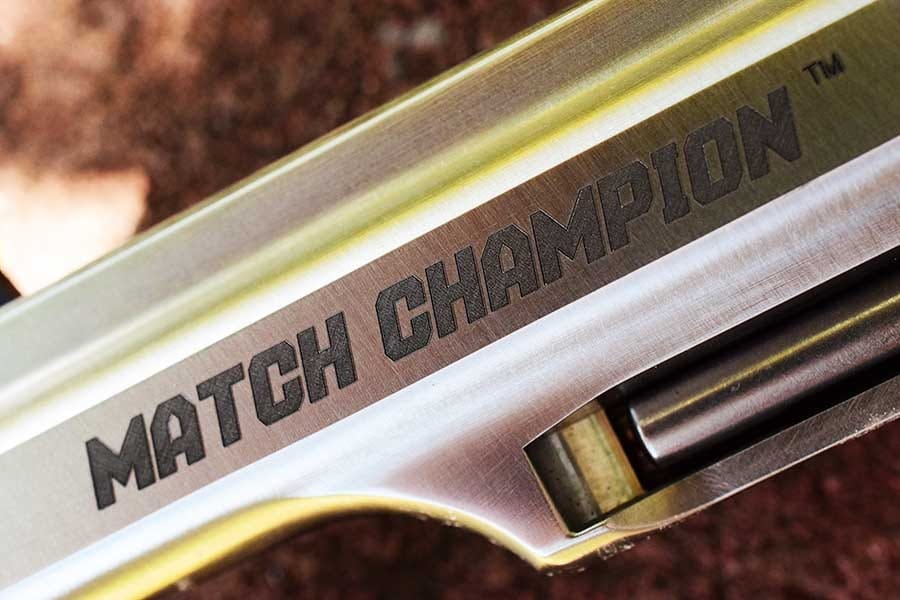 With the Match Champion Ruger dressed to the nines, in terms of features, does it finally dethrone Smith & Wesson as the king of revolvers? Nearly. This new factory-tuned GP100 is just that, a tuned GP100. The shortcomings of the design are still there, but they’ve been marginalized. The ergonomics aren’t as buttery smooth as a custom-shop Smith, but they’re on par with its mid-level offerings like the 686 for about hundred bucks less. Which begs the question, why would a new shooter choose something like the Match Champion over a Smith & Wesson revolver at a similar price point? 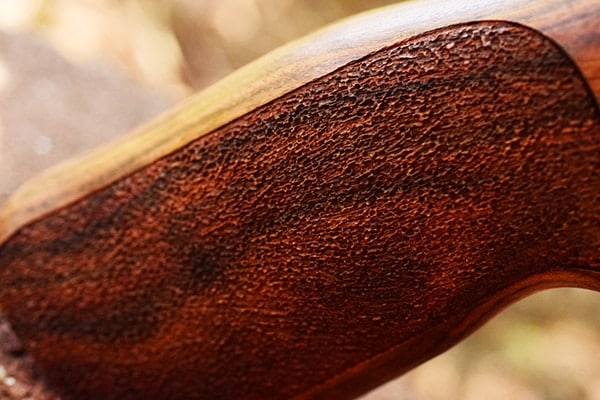 The Champion’s new Hogue grips are handsome and functional. (Photo by Jim Grant)

The GP100, being on par with the 686 and arguably superior to the Model 64, outclasses any DA .357 revolver Smith, Colt Taurus or any other mainstream manufacturer currently makes in terms of frame strength. This durability translates into weight, but the Match Champion isn’t a carry gun so this weight can be considered beneficial because it soaks up recoil. The only aspect of the GP100 Match Champ that doesn’t surpass Smith’s wheel guns is finish on both the surface and edge. The outer finish on all Ruger guns is somewhat rough, but very functional. These guns aren’t mantelpieces, they’re over-built tools. Certainly every edge of the GP100 is chamfered, but not quite to the same degree as Smith’s revolvers. The Match Champion’s new grip does much to address this, but isn’t quite up to snuff with Performance Center Smith & Wesson’s. Although at hundreds less, this may not be important to you. 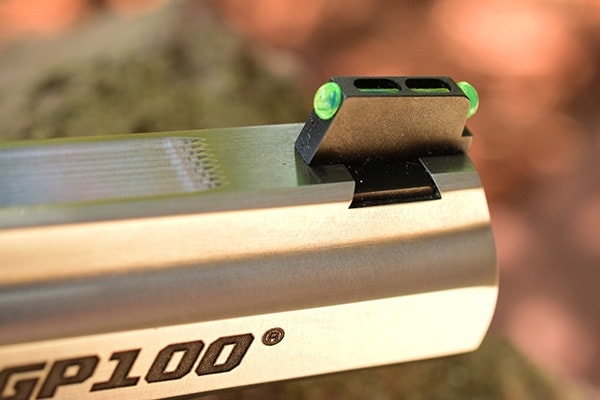 slab-side bull-barrel and a fiber optic front sight is a winning combo. (Photo by Jim Grant)

While Ruger revolvers have always played second fiddle to Smith & Wesson’s models, the new Match Champion seeks to upset this balance and does a hell of a job.

The Match Champion is superior in nearly all regards to Smith & Wesson revolvers in the same price point, save for appearance. The GP100 in all its incarnations will outlast you, your grandkids and their grandkids. the Match Champion takes that durability and makes it more accurate and ergonomic. What more could you ask for?