Kahr isn’t a company known for cutting corners. The company constructs its guns with the intention for them to endure the range and life-threatening situations.

While it seems rather difficult to build a reliable and durable subcompact semi-auto pistol, Kahr actually specializes in it.

The tolerances on their guns are extremely tight and if there’s ever a complaint about them it’s about the break-in period. Granted this type of manufacturing comes at a slightly higher price, so it’s a breath of fresh air to hear that Kahr is expanding its economical line of handguns with the CM40.

The CM series is Kahr’s economical line of concealed carry handguns. It’s closely related to the PM series in general appearance and performance, so much so it can be difficult to tell them apart. Although the differences are subtle, they are in fact different – in about 269 ways. Kahr is able to reduce the gun’s suggested retail price by using different components and including fewer accessories in the overall package. 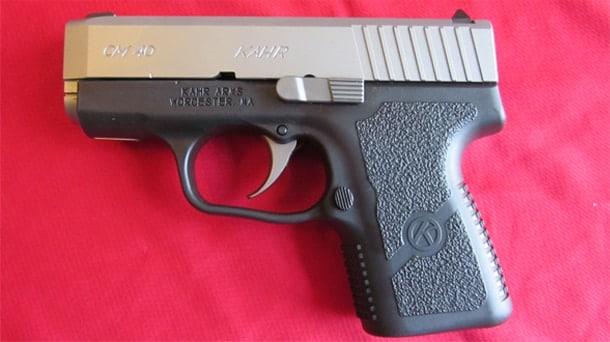 Starting with components, CM guns have a different slide stop, barrel and fewer engravings on the slide. The slide stop is different in that it is constructed through a process called Metal Injection Molding (MIM). In a nutshell, this technique starts with, what looks like, small pellets of steel that are poured into a mold. It is then heated until the pellets meld together and form a single component.

In addition, the CM series uses a conventional rifled barrel instead of a match grade barrel, which, in my opinion, what does it matter? This gun isn’t intended for match shooting. Lastly, the CM series has fewer engravings and rounded edges on the slide.

In the end, a CM gun like the CM40 is a plain, simple, reliable self-defense handgun. There’s just enough of what you need. 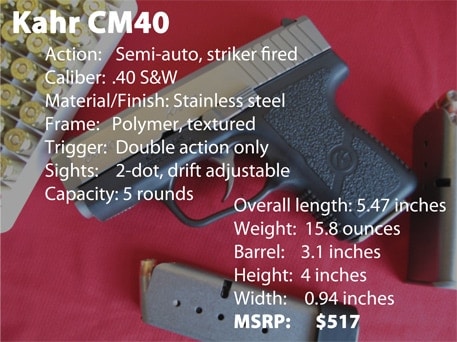 The CM40 is a rather simple gun, but since it’s a concealed carry piece that’s not necessarily a bad thing. What it does feature is a double-action only trigger, two-dot sights, a slide stop and one five-round magazine. It’s a striker-fired pistol chambered in .40 S&W. It has a polymer frame and stainless steel slide. It’s about 5.5 inches long, four inches tall and weights 15.8 ounces unloaded. (Small + Light = Easy to conceal)

What took my attention most was its ease-of-use – like one would assume most guns would be, the Kahr CM40 was a simple point and shoot gun. Instead of a manual safety it just had a double-action only trigger, meaning there would never be an additional step like selecting “fire” before firing. Also, unlike some other subcompacts, the CM40 locked back every time on an empty magazine.

Just looking at the size and materials used, I imagined recoil was going to be severe, but shooting FMJs was no big deal. Recoil was rather mild and very controllable. However, once I loaded up the hollowpoints recoil was exacerbated.

With the CM40, you should be able to effectively hit your target. It wasn’t going to matter if it had a conventional rifled barrel or a match grade barrel when I shot the CM40. At 25 feet, I had groups around three inches. I was able to consistently knock down bowling pins, explode sitting clays and punch an eight-inch rubber gong. 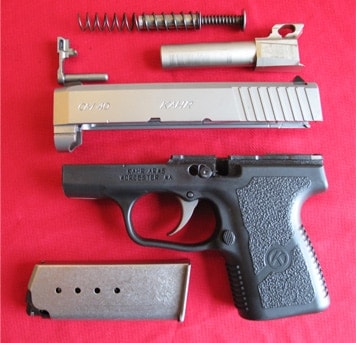 As mentioned earlier, the CM40 is an economical pistol and part of that “economy” pricing means it has fewer engravings, so I was surprised to find notch marks on it that indicate the precise position the slide had to be in order to remove the slide stop. While yes it is a minor detail, it was considerate and incredibly user friendly because it breaks down similarly to a 1911, which, you may have guessed, can be aggravating.

While I rather enjoyed shooting the Kahr CM40 (because I’m a sick and twisted person who actually likes shooting concealed carry pistols), my only criticism is on the trigger. While the pull did feel a bit spongy, that’s not my complaint. My gripe is with the reset, which didn’t happen until the trigger returned fully to its starting point. To be more specific, it was difficult to intuit when I could shoot subsequent rounds. Yet, this is only problematic if you’re shooting slowly and, after every shot, regaining composure – and this is a get-off-me-gun.

While Kahr considers the CM40 an economical gun, it certainly isn’t built like one. Although it isn’t the sexist, the quality is topnotch and incredibly easy to use. While it is $269 dollars less than the PM40, with the money you save you can easily afford an extra magazine and a few extra bullets.