A love letter to the Beretta 71

Several weeks ago, with the threat of a large snowstorm derailing a planned excursion to the local gun show, I decided to take preemptive action and spend some of the money earmarked towards the show. I enjoy history and was hoping to find another interesting milsurp at the show, but with that prospect going up in smoke I decided to check my local stores.

One store had something that I have been eyeing for a while: a Winchester ’92 clone made by Rossi in .357, but laying in the corner of the used pistol case was a small Beretta .22 LR pistol with a fake suppressor and a price tag much larger than it’s size: a Model 71.

Deciding not to buy anything at the store, I went home and researched the curious little Beretta. Typing in it’s name into Google brought up several articles touting that it is the preferred pistol of Mossad assassins and Israeli Sky Marshals. This description caught my attention more than a statement about a well made target or pocket pistol ever could. Reading more articles and forum posts, the little Beretta’s high price tag didn’t seem so unreasonable. Deciding that an “Israeli Assassination Pistol” was a much more interesting story than a “Brazilian made Winchester clone”, I returned to the store later that day and bought the pistol for $350, plus taxes and transfer.

Despite my earlier aversion to spending $350 on what looked like a worn .22 pocket gun with a cheesy fake suppressor, I could tell I was holding a quality firearm when I picked it up. Pulling the slide back on a down hammer was a easy and smooth task. Much easier to do than any of my centerfire pistols or any Beretta tip-up pistol. Despite the small size of the pistol, the fake suppressor adds quite a bit of heft, to what would normally be a lightweight, alloy framed .22 pocket gun. Most of that weight now makes the pistol nose heavy.

The finish is matte blue for the slide and barrel, black paint for the alloy frame and polished blue for the fake suppressor. Checkered black plastic grips with the Beretta trident emblem are standard. As it is a pocket gun, the grip is small and normally a gun of that size would leave your pinky finger hanging in the air. However, this being an older Beretta, it features the famed “Beretta Spur”, a spur hanging off of the magazine to ensure that your pinky finger has a place to rest. This feature blends in nicely with the lines of the pistol. This spur is also seen on the classic M1934 Beretta pistol, amongst other designs.

A note about that fake suppressor: it is held on by a set screw that is screwed in the side of the suppressor, welded over and polished. The polish job is nice and there is only a small mark where you can tell where the set screw is. The suppressor is also screwed down with Loctite on the threads. Removing it will require tools to remove metal to expose the set screw, and a heat gun. I have not yet removed the suppressor, but it would be an idea to consider, as it totally obscures the sights.

Markings are what you would expect on a European pistol. Builders marks, importer marks, proof marks and the take down lever marked ‘Smontaggio’. The date code is two letters inside of a box, ‘AA’, meaning the pistol was built in 1975. Oddly the only mention of the pistol’s model number is an import mark on the side of the frame of the pistol. The slide only mentions the maker of the pistol, caliber and that it was made in Italy. 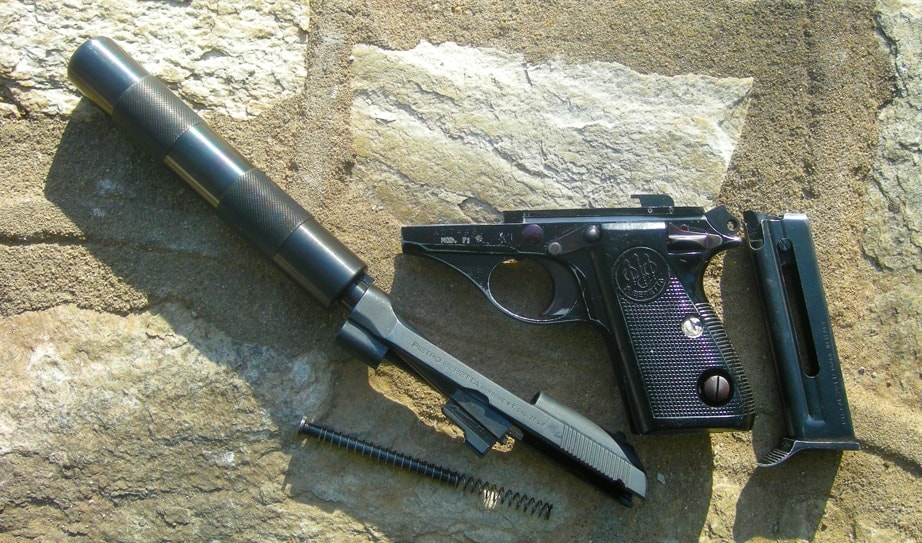 The pistol is a single-action design. The hammer has three positions: down, half-cock and full-cock. Older model 71s will feature a cross bolt safety at the top of the grip, much like an M1951 Beretta pistol. Later models, such as this example, will feature a thumb safety like those found on an M1911 pistol, which engages with a very positive click when pressed upwards into the safe position. The safety can be engaged when the hammer is both on full-cock and half-cock. As expected, the trigger doesn’t function and the slide cannot be manipulated while the safety is engaged.

The magazine release is… unique to a certain degree. Much like the M1951 Beretta pistol, the Model 71 mag release seems to bridge the European style heel release with the American style of a push button by the trigger guard. In other words, it features a very large push button release near the bottom of the grip. It is flush with the grip, so there are no worries with your hand squeezing down too hard and hitting the mag release. Speed reloads with this system can be achieved with a bit of practice.

The magazine itself holds eight rounds of .22 LR and while there is no tab on the side of the magazine to assist you with loading the magazine, you can reliably load it to the eight-round maximum without a tab. Nevertheless, if you feel like one is needed, you can simply use a spent .22 LR case to help you with loading the magazine by inserting the mouth of the casing over a screw on the side of the follower. If you do not have a spent shell on hand, you can easily use your fingernail to help pull it down.

The trigger is crisp and light-but-not-too-light. This may be due to the fact that the gun was made in 1975 and has been thoroughly broken in from many years of use. Despite the nice trigger, the fake suppressor obscures the sight picture. However, after shooting several magazines through the gun, you will eventually know where and how to point the pistol. I am reminded of the Tom Clancy classic “Without Remorse”, where John Kelly built his own suppressor for his M1911. After discovering the suppressor obscures the sights, he paints a white line starting right above the front sight and continues the line straight down the length of the suppressor to help with his aim. I plan on doing this to my pistol, if I decide to keep the suppressor on.

Disassembly is straightforward, even for those who are not familiar with Beretta pistols. Check that it is empty and remove the magazine. Retract the slide enough that the takedown lever is under the cut out on the slide. Flip up the take down lever and pull the slide forward and off the frame. Underneath the barrel is the guide rod and recoil spring. Remove those and normally you would be able to remove the barrel. But the fake suppressor prevents that. It is possible to clean the barrel from the breech end with it on, but it is annoying.

Prices are all over the place for this little pistol. Various gun auction websites list the Beretta 71 from anywhere between $250 to $995(!). I suspect the Israeli connection, along with the rarity of these pistols are driving up the cost. While I sincerely doubt my pistol was used in any sort of assassination, or even used anywhere near the Mossad, there were what appeared to be rack numbers painted on the back of the grips. However, cheap paint was used and these numbers rubbed off quickly. Only small amounts of white paint left on the screws and in between the checkering on the grips remains. There is a chance that your pistol was assigned to some sort of agency and possibly used in the field or just as a training pistol of some sort. Still you can brag to your friends at the range about your secret spy pistol. 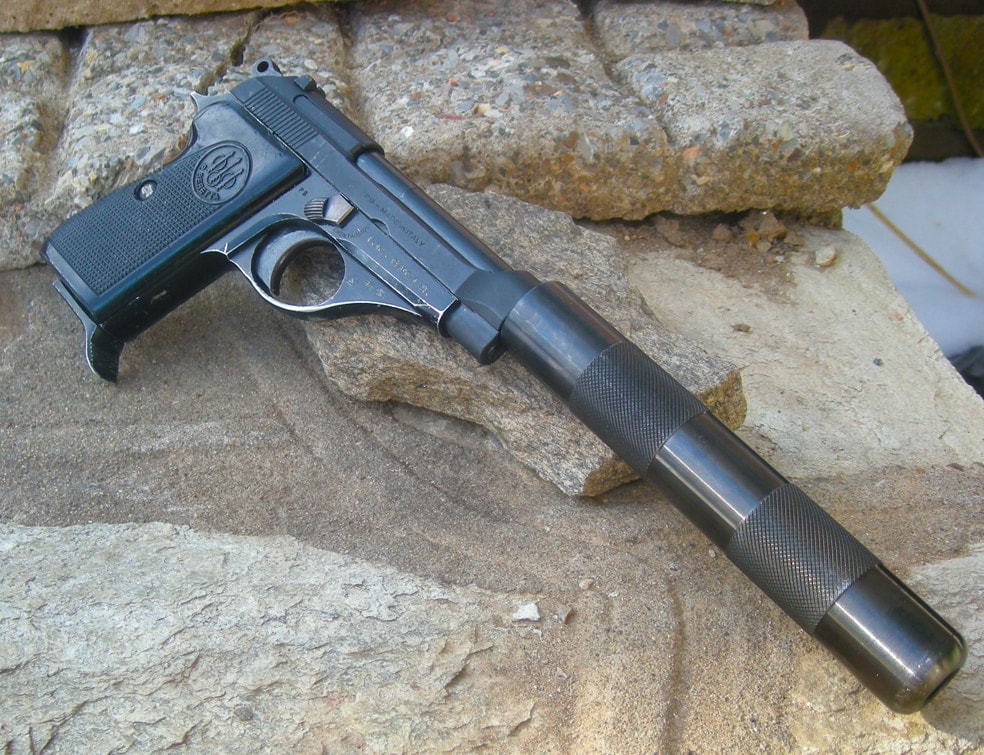 Good for eradicating splinter cells along the Sinai or plinking tin cans. (Photo by F. Borek)

I spent $350 on my pistol. What I thought was a steep price for a worn looking, pocket .22 pistol with a cheesy fake suppressor screwed on, instantly became a bargain when I learned of the Israeli connection with these pistols. Still, a good story is not enough, and when I took it to the range, it was a reliable, soft shooting and overall fun pistol. Whether it is for punching paper or teaching new shooters the basics, everyone needs a .22 pistol.

I’m not too sure if I’d recommend this gun as a self-defense weapon, caliber notwithstanding. Magazines can be hard to come buy and expensive. Also, the fake suppressor makes concealing the gun pointless.

On a side note this pistol uses the same magazines from the slightly more common Beretta Model 76. If one were to remove the fake suppressor, the ease of racking the slide could make it a choice for those who need a gun with a slide that is easily manipulated. I would recommend this gun as a trail gun, a gun to take camping or stuff inside a tackle box, with the caveat about hard to find magazines.

I believe the most important reason to own this pistol is for the fun and joy of shooting. With the large fake suppressor, one can take this gun to the range and send round after round into paper targets, living out your favorite spy movie fantasy. I confess to my friends that when I first shot this pistol I had the intro song to “Casino Royale” running through my head each time I picked up the pistol. It is simply a fun gun to shoot, even with the fake suppressor obscuring the sights.

After my first outing with the pistol, I have given serious consideration to keeping the fake suppressor and live out a James Bond fantasy each time I take it to the range. Heck, I bet there can be some sort of action shooting competition created with .22 pistols with fake or real suppressors and everyone in suits and tuxedos.

I heartily recommend this pistol to anyone who enjoys shooting, the only problems are availability, the price tag and fake suppressor. However, if you do manage to find a one in your local store and there is some wear and tear on it, purchase it before someone else does. Someone almost bought this one before I did, but foolishly decided not to. I do not regret buying this pistol and neither will you.