Snow is flying, winter is upon us, and many hunting seasons have closed.  But small game is still open, and stands of old maples everywhere are full of barking squirrels.  Lets forgo the age-old shotgun versus rifle debate.  In fact, forget long guns in general.  Whether you spot and shoot, sit on stump, run with a dog, or stalk those tricky tree-jumpers — if you want a real challenge and a really good time — grab a rimfire handgun and hit your nearest stand of squirrel trees.  The crock-pot awaits. 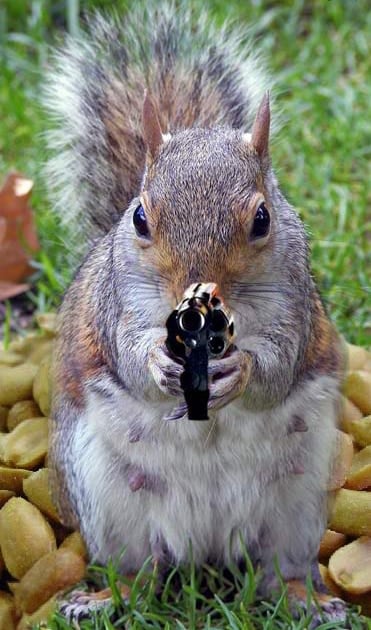 Squirrels, the most dangerous game.

Before we get into the Hatfields and McCoys of squirrel hunting, let me just say I harvested my first squirrel with a single-shot .410 and still have a warm place in my heart for it.

However, that warm place cooled as I picked BB upon BB from the cleaned animal. It was a joy to shoot squirrels with a scattergun as a kid because, plain and simple, they were easier to hit.  But I became a better marksman when gramps switched me over to a single shot .22.  One calculated headshot, one clean kill.  No ruined meat, no shot removal.  Flash forward to today.

I am of the camp of believers that squirrels are small game (edible) and not varmints (inedible), and thus shots must be clean. Think hitting a squirrel in the head (or other small, vital, non-meat-ruining area) is hard enough at distances with a rifle?  Now take the ultimate challenge and do it with a handgun.

Though oft-thought as kids’ quarry, squirrels offer off-season big game hunters not only a chance to hone shooting skills, but also a crisp time of year to hit the woods.  So if rimfire long guns just don’t trip your trigger anymore, reach into that handgun rack.  Caliber-wise, here is a proven starting point:

.22 LR – The old stand-by.  This is probably the best platform of all for squirrel handguns.  Ammo is as cheap as you’ll find.  Though any old rounds will do, some nice hunting loads are best.  Target loads do not always make the best hunting rounds, and what you may love in your rifle might not shoot best in your handgun.  So test a few types — including high velocity flavors — in your handgun before you hit the woods.

.22 WMR – Many .22 revolvers also come with Winchester Magnum Rimfire cylinders, though I find the WMR round nearing overkill on squirrels as it is both destructive on the meat and a real penetrator of a round.

However, WMR’s are certainly worth your try for hunting. Like the .17 HMR, accurate shots are a must.  When compared with the .22 LR and .17 HMR’s I’ve shot, I found the WMR to be the least accurate of the three, both at the range and in the woods.

.17 HMR – The .17 Hornady Magnum Rimfire is a very efficient squirrel dispatching round, though cost is much higher than with the .22 varieties.  Seventeens have gained a great following of late, and all sorts of ammo is readily available.  Headshots here are an absolute must due to potential meat damage, but are certainly possible due to the round’s remarkable accuracy.

Remember that rifle and pistol barrel velocities are two different animals as well, so something like a V-Max bullet that may cause catastrophic critter damage in a rifle is more manageable in a handgun.

On a tangent, you could also hunt with the .17 Mach 2 — a necked down .22 LR stinger case — but I don’t own any guns chambered for it, and am generally unfamiliar with its characteristics.

Sure, any old rimfire handgun will do.  The beauty of small game hunting is that there’s no need to rush out and buy a special gun.  But I’ve hunted with many, and some are just more apt to boost your success rate and tail count. 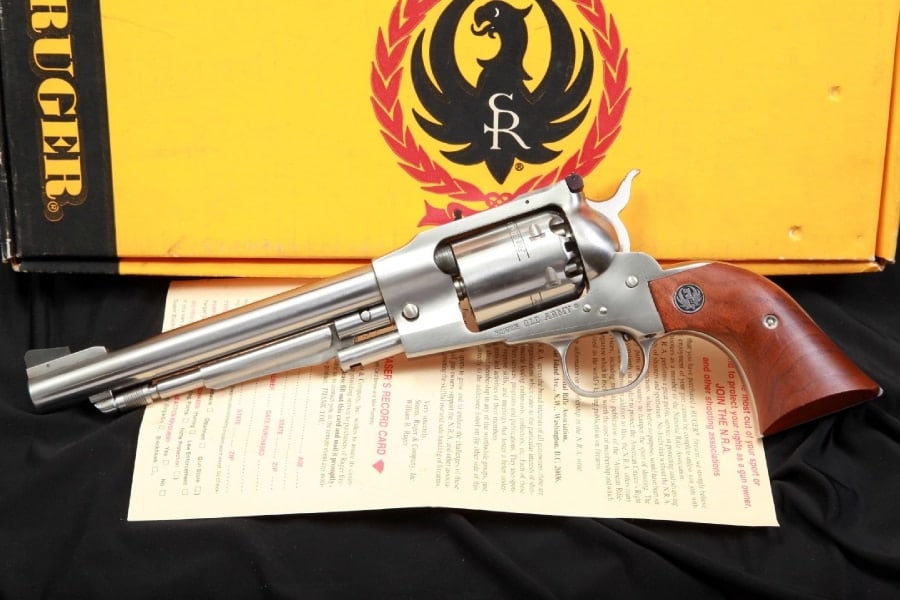 1. Ruger Single Action revolvers – Cowboy hat meets squirrel hunter. These guns are plentiful, available in a variety of barrel lengths and finishes, and a warm home to any of the three aforementioned chamberings.

The Single Six is classic and convertible models come with both LR and WMR cylinders.  Ruger’s Single Nine and Single Ten offer more firepower, though treed squirrels seldom offer that many chances.  The Single Six in .17 HMR comes with a 6.5-inch barrel, which is nice.  Barrels that are 6 inches and greater are a boon for accuracy.  MSRP $569 to $739 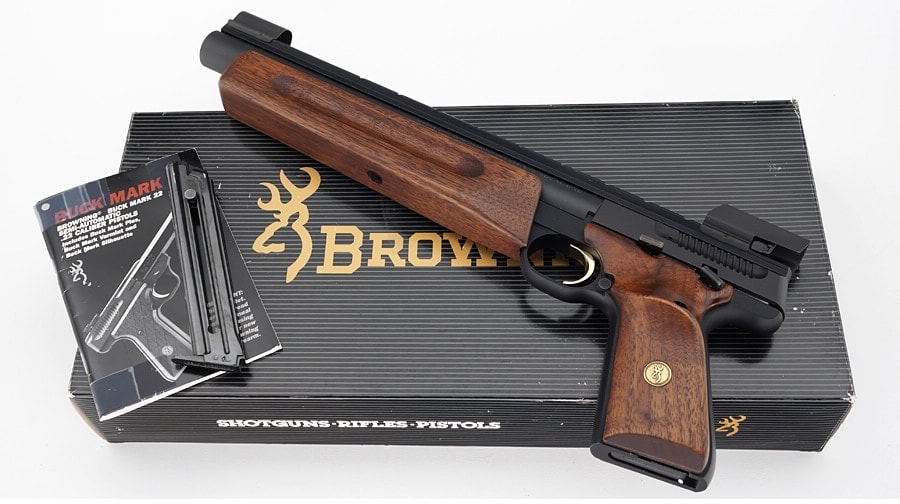 2. Browning Buck Mark – In the long line of Buck Mark semi-auto pistols, the Hunter is my favorite for small-game applications. Its heavy 7.25-inch bull barrel makes accuracy in the field a snap.

Chambered for .22 LR, the adjustable sights are nice, but the ease of optics mounting is even better.  MSRP is $479. 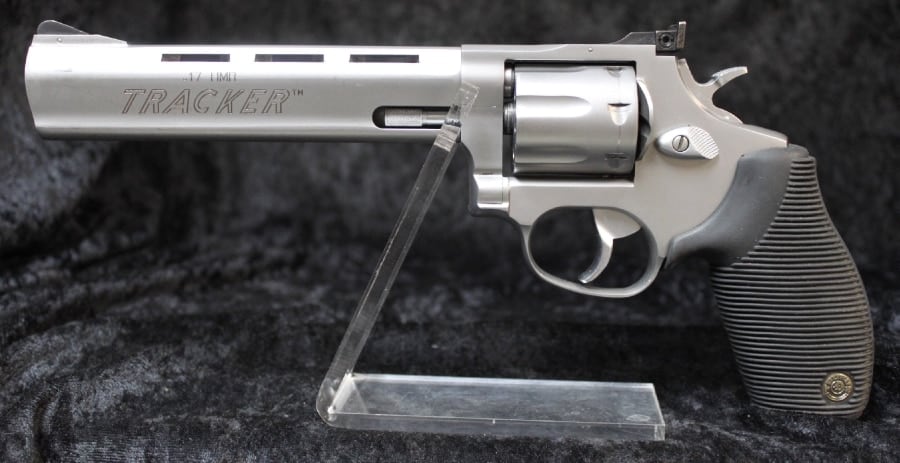 3. Taurus Tracker – Taurus makes some sweet revolvers in its Tracker line, with offerings in .22 LR, .22WMR, and .17 HMR.  The Tracker Model 17 has a 6.5-inch bull barrel, single-action/double-action trigger, and comes in either matte stainless or blued finish.

Likewise, the Tracker 992 shares features but comes with both .22 LR and .22 WMR cylinders. Where the 17 holds seven rounds, the 992 has room for nine.  The Tracker shines for this application because it quickly accepts a scope base and rings.  MSRP is $523 to $619 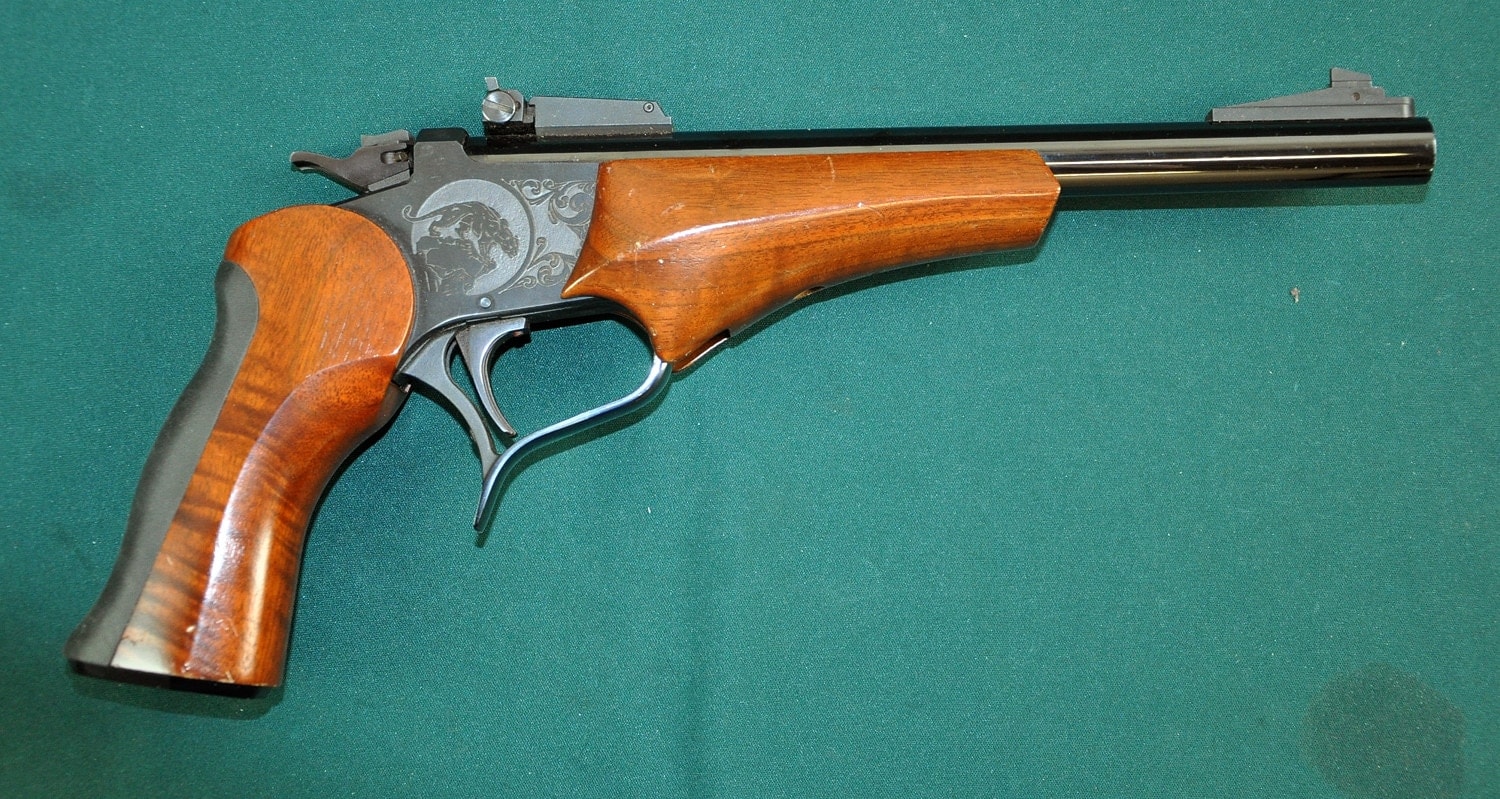 4. Thompson Center Handguns – T/C makes some great options, especially for those hunter-fans of convertible arms.  The Contender G2 handgun can be had with a .17 HMR barrel in 14-inch length.

The Encore line of pistol barrels are 15 inches and include both .22 LR and .17 HMR.  All the T/C’s are single-shot break-action, bred for hunting, come with adjustable sights, and most are drilled and tapped for optics mounting. 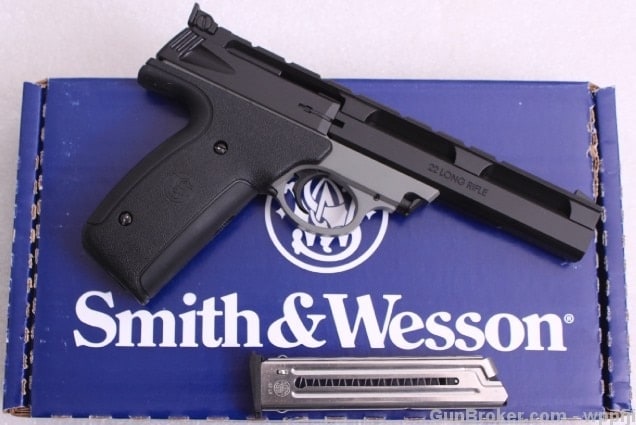 5. Smith & Wesson Model 22A – The .22-caliber pistol is an optics-ready, budget priced, hunters handgun.  It is semi-auto, holds 10 rounds, and comes in a wide variety of finishes, all with 5.5-inch barrels. 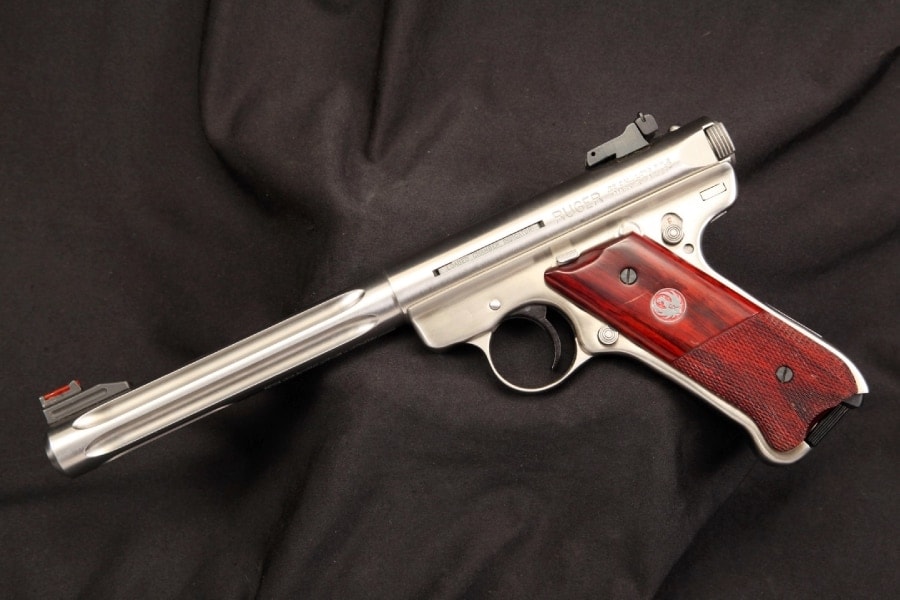 6. Ruger Mark III Hunter – Though a diehard fan of wheelguns, I must admit the Mark III Hunter with laminate target grips is one of the baddest .22 LR pistols I’ve ever loved.  Its fluted bull 6.8-inch barrel is perfect for small game hunting, though the stainless finish is better for the target range.

The Hunter’s adjustable fiber optic sights are nice, but mounting optics is slightly more difficult that with some of the other handguns mentioned. Still, this was one of my favorite shooters.  MSRP is $729.

While iron sights are often adequate on rimfires, nice optics on a small game handgun will definitely extend a hunter’s shooting range.  Magnifications of 3-7 or 2-8 x32 are common. If traditional pistol scopes are not your thing, the market is flooded with red-dot and holographic varieties.

Beyond optics, several other considerations are necessary when hunting smallish critters with a pistol.  Getting a steady rest is a must, as is practicing a solid grip and quickly acquiring targets.  Misses while handgunning for squirrels are aplenty, so this is not the ideal way to start-off new hunters.  As with any kind of hunting — but particularly when shooting upwards into the tree line — awareness of the bullet’s path of travel (and thus, type of bullet) is a must.

The beauty of bushytail handgunning?  It is inexpensive, challenging and any of the aforementioned “squirrel guns” hold far more uses.  As if that’s not reason enough, hunting small game with a handgun is a true lesson in woodsmanship.  Limiting successful shooting range with a handgun makes one ultra observant of quietly stalking into shot distance, quickly seeking a rest, and using the proper technique to make accurate shots.  This challenging sport makes better hunters of us all — and new squirrel recipes are just a cookbook away.