Do you lie awake at night worrying that a horde of home-invading ninjas will bust down your door at any moment, and you — like a sucker — will have a measly 17+1 rounds in your bed-side Glock? Rest easy friend, the Serbs heard your cries for help and answered with a resounding “Nikad Ponovo!” (Never again!) The answer comes, not in the form of words, but of wood and steel: the PAP M92 pistol. 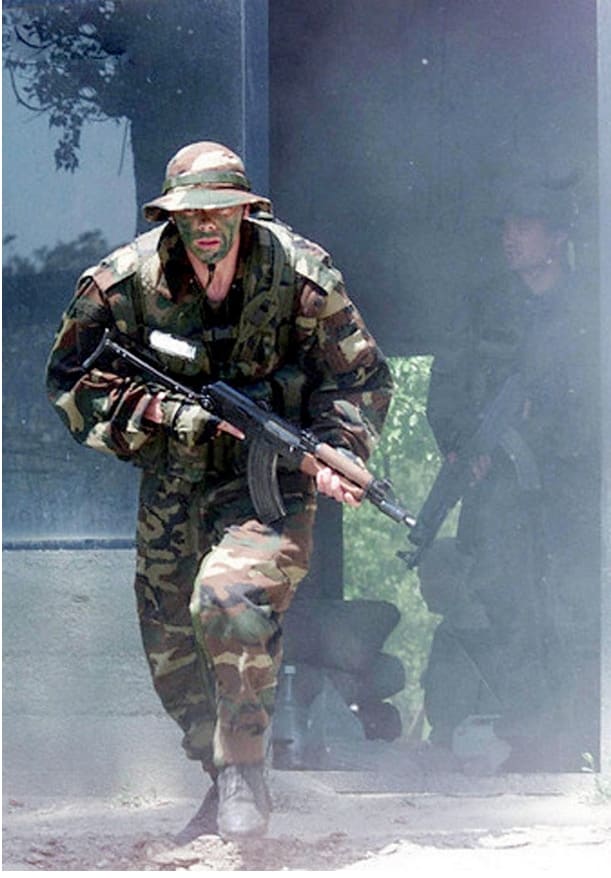 Shooters familiar with the former Yugoslavia arms manufacturer Zastava will notice many striking similarities between the M70 rifles and the Serbian PAP series, because they are one and the same; when Yugoslavia fell it became Serbia. Just like their Yugo predecessors, the PAP range of weapons are civilian legal variants of Eastern Block small arms. For the customer this translates to mil-spec weapons of war being commercially available to the enthusiast here in the U.S.

The PAP M92 is a pistol variant of the N-PAP’s carbine cousin, the M92 Sub Machine Gun, which is a SMG in name only. Chambered in the 7.62×39 intermediate cartridge, the M92 is more akin to the U.S. M4 carbine than a true SMG like the Heckler & Koch MP5. This is an important distinction for U.S. shooters that shoot at public ranges. Just because people call the weapon a pistol doesn’t mean the indoor range owner won’t toss you from his range for ventilating his backstop. Best policy: ask before you shoot. Better to waste $30 on a lane fee than three months salary on a backstop. 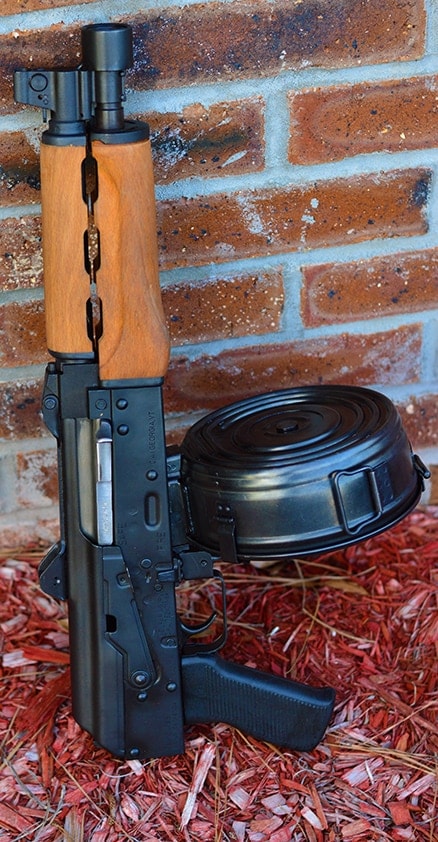 75 rounds ought to due. (Photo by James Grant)

A word of caution for you after-market parts guys: the PAP series of rifles are non-standard in terms of AK rifles. Instead deciding on a locally modified AK variant with very few interchangeable parts, the Yugos — and thus the Serbs — deviated from their Warsaw Pact neighbors when rearming with AK pattern weapons. Meaning, if you have a cool muzzle brake for your favorite Arsenal AK that you’re dying to slap on your PAP, you’re more than likely going to need an adapter.

The PAP is a heavy-hitting mini AK with no forward grip or butt-stock; so what good is it?  In its original factory condition, the PAP is basically an expensive noise-maker. It is very difficult to aim, unbelievibly imbalanced, heavy and unwieldy. The PAP M92 is, undeniably, a ton of fun to blast away mag after mag on the range, but it also has some practical uses as well. In a team environment, where a shooter isn’t responsible for errant rounds the PAP would make a great compact suppressive fire device, allowing additional team members to outflank and eliminate threats.

The PAP used such a way at home would be a liability at best, especially given the 7.62×39 round’s tendency to over penetrate walls. However, with the addition of the SB Tactical SB-47 Brace, the M92 becomes a hard-hitting, ultra-compact force of reckoning. With brace and 75-round drum, the M92 gives the wielder the ability to hold off a handful of attackers with one hand, reserving the other for dialing the police. 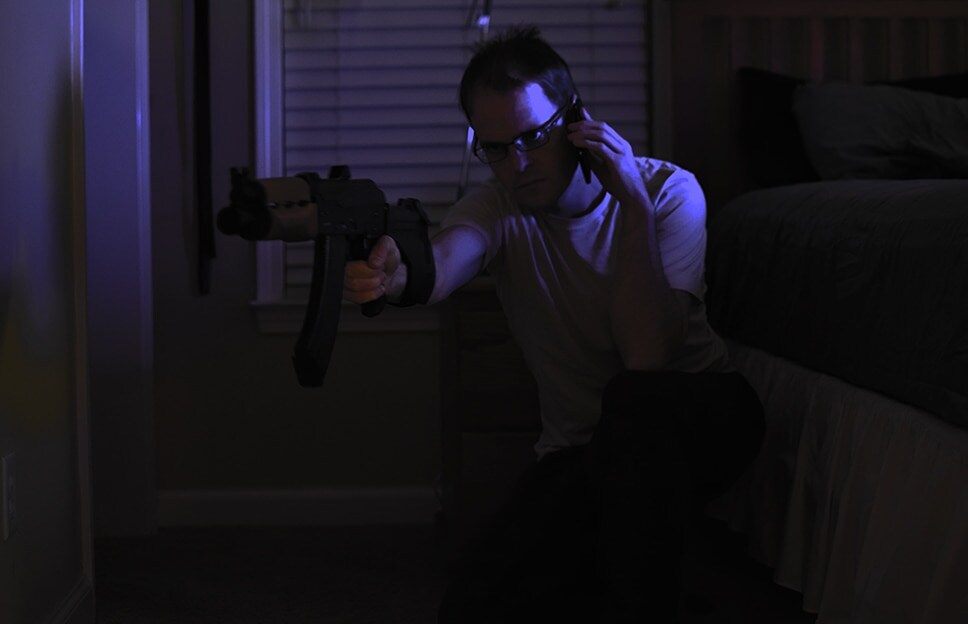 Bad guys won’t get in your home in one piece. (Photo by James Grant)

The ability to wield the PAP M92 is especially useful for shooters who have lost the use of one hand. These shooters often can’t shoulder a full-sized rifle or work the action on a pump shotgun. While clearing malfunctions with one hand is incredibly difficult, the PAP’s long-piston venerable AK action means you’ll have a better chance of finding a hundred-dollar bill on the street than jamming the gun.

There are a few things to keep in mind with such a short-barreled weapon, namely noise and muzzle blast. The noise can permanently damage your hearing, unless you put on some sort of ear protection. With good electronic hearing protection the PAP will still make your ears ring, but you’ll be no worse for it. Additionally, the muzzle blast is enormous and it will blind you inside of a dark house. Wise shooters should have a flash suppressor (or better yet, sound suppressor) fitted to the M92 to minimize muzzle flash.

When fired with the SB47 brace at 25 yards the PAP grouped an average of 2-inches using Century’s Red Army Standard Ammunition. It grouped slightly worse with Wolf’s WPA Polyformance ammo. Neither brand experienced any stoppages or jams of during the duration of the 1,500-round test. I conducted this test with Chinese, Romanian, Soviet and Bulgarian Steel 30-round magazines as well as 75-round Romanian drums and 30-round Bulgarian circle 10 polymer magazines. 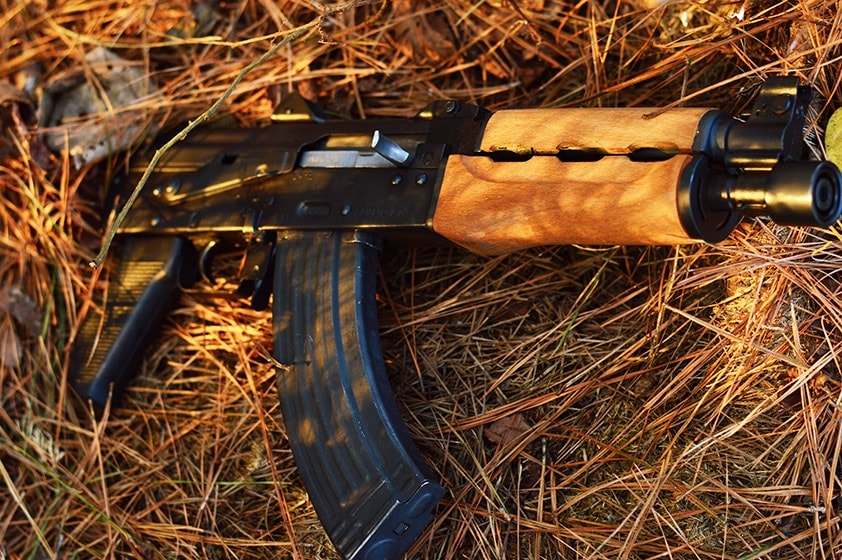 With looks as sharp as the safety lever. (Photo by James Grant)

The only failure I experienced was due to lack of upper body strength. The PAP’s weight is a substantial 5 1/2 pounds, and like all AK rifles is not dehorned in any way. The PAP’s sharp edges and stiff safety ensure your hands will need a steady supply of bandages until you break in the gun. A solid alternative to buying your local pharmacy out of medical supplies is to wear a pair of basic gloves. I highly recommend Mechanix basic tactical gloves.

One huge benefit of the PAP pistol is its maneuverable indoors. Much like its folding-stock military cousin, the PAP is designed for crews working inside vehicles, where space is at a premium. Although not as maneuverable as a standard pistol, the PAP’s hard-hitting round makes short work of an assailant’s leather jacket, no matter how thick it is.

Understandably, it’s not for everyone. The PAP M92 makes a heck of a home-defense weapon with the proper accessories. Home-invading ninjas, beware.