Bushmaster makes a nice little AR pistol that’s largely carbon fiber called the Carbon 15 – unfortunately, we’re not going to be talking about that particular gun today. Nope. Today we’ll talk about its predecessor made by a now-defunct company called Professional Ordnance. After the company went under, Bushmaster bought the rights to the design, along with some inventory and then proceeded to revamp the design. They did this because a lot of people had major problems with the original Carbon 15.

What kind of problems? Jamming. The Professional Ordnance Carbon 15 was a cool little pistol, with a seven-inch barrel, just 20-inch overall length and weighing 46 ounces. But the original design had a number of proprietary parts, specifically in the bolt and carrier design, and the thing jammed – not always, but a lot.

We ran into this very problem when we included one of these guns in the Ballistics By The Inch testing of the .223 cartridge last year. We got it to run well enough that we were able to get the data we needed, but that was about it. And even then, we had to fuss with the thing with almost every shot.

The gun belonged to one of the BBTI guys. He’d picked it up for a song a few years before and while he knew that it had problems it had worked pretty well for him previously. I found out later, after the testing was done and he took the thing apart to see what was causing the problem, that a small part in the bolt assembly had broken, which was causing the gun to partially seize up. He was able to replace the part and shoot the gun – and enjoy it – but he treats it just as a fun toy to take out to the range. Nothing more. 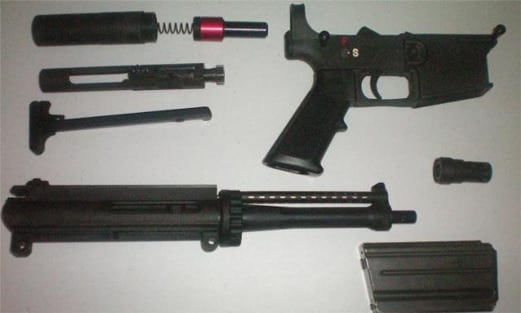 And this was what happened to a lot of people who got these guns, which is why Professional Ordnance went out of business. What could have been a very good option for a lightweight AR pistol turned out to be undependable.

Overall, shooting it wasn’t bad. The seven-inch barrel got reasonable performance out of the .223 cartridge, about two-thirds of what a full-length barrel did. The fireball and blast wasn’t too horrendous (as an aside, we also tested the .223 out of a three-inch derringer – that was an insane fireball and blast! It was like setting off a concussion grenade six-inch away from your hand).

Recoil was pretty good, too, which is one of the advantages of the gas-operating system (and one’s like it) found on AR-platforms. In most other regards it was like shooting any decent but basic AR.

But be warned: these guns are really problematic. If you see a neat little Carbon 15 AR pistol at your local gun store, or advertised online, make sure that it isn’t the earlier Professional Ordnance version. Or if it is, take that into consideration when considering the price of the thing, and what you want to use it for.

If you’re just looking for a fun toy you don’t mind messing with regularly, then the Professional Ordnance Carbon 15 fits the bill. But if you’re looking for something reliable, make sure that it is the Bushmaster version.

Prices will vary, but it can be found for around $675.