The art of 10mm long-slide pistols has been growing over the past few years as hunters embrace the power-packed round for big game. With viable options already on the market from the likes of Glock, Sig Sauer, Ruger, Dan Wesson and Colt, one of the big factory names missing out on the party has joined ranks.  Enter the Remington 1911R1.

Built to appeal to hunters, the 1911R1 10mm Hunter Long Slide marks the company’s only real entry into the pistol hunting market. As discerning handgun hunters have come to realize now more than ever before, the 10mm chambering offers plenty of knockdown power to take deer-sized game – or even bigger beasts in the hands of a practiced hunters. The design is reminiscent of an earlier version by Para-USA, a company which had parent company ties to Remington Arms through the parent company Remington Outdoor Company.

The Hunter is equipped with a six-inch match-grade barrel, fully adjustable sights, accessory rail and blacked out finish for unassuming work in the woods. The finish on the gun is not only muted, but also built for extreme hunting conditions with a stainless-steel frame and slide finished in a hardcoat of what Remington calls “PVD DLC.” The whole rig is dressed in ultra-aggressive Operator II G10 panels with plenty of grip for hunters in inclement weather.

Other features on the pistol design are geared toward increasing both accuracy and control, from the adjustable skeletonized trigger to the extended beavertail grip safety and aggressive front-and-rear cocking serrations. And, The whole thing ships in a classy dark green cardboard box with two, eight-round stainless CheckMate mags and a plastic bushing wrench.

The biggest drawback to Remington’s 1911 R1 coming-out party is the price. Starting at $1,310 retail, this factory hunting pistol is priced in the range of some custom shops. Only a day on the range reveals whether the gun can justify its price tag.

On the range: Performance

A crisp trigger pull goes a long way to making a great hunting handgun. As we hoped after seeing the price, the trigger is one of the highlights of the R1 Hunter. First, it’s easily adjustable from 3.5 to 5.5 pounds. Second, our gun’s trigger broke at a very clean 4 pounds right out of the box.

With a 9.5-inch overall length and weighing in at 41 ounces empty, this pistol is quite a handful when fully loaded. That weight, however, also works to negate the potentially stiff recoil from 10mm hunting rounds while the longer slide and barrel length are welcome assistants to accuracy.

The adjustable, match grade sights are easy to acquire, even in questionable light. If you’re primarily a scoped-gun hunter, it may take some practice to shoot well, especially in rapid-setup situations, if you’re not accustomed to open irons on pistols. The longer slide is more forgiving, of course, with its longer sight radius.

The overall fit and finish on the 1911 R1 Hunter is exceptional. The full matte-black finish throughout is sleek in appearance and practical for incognito hunting situations. Controls are easy enough to manipulate and will be familiar to any 1911 shooters. The VZ premium G10 grips, are sharp in both appearance and feel. In fact, they are so aggressive it’s necessary to wear shooting gloves unless you have leathery palms. Most hunters would much prefer overly aggressive grips to inadequate purchase on a weapon. The looks and parts make the R1 Hunter poised for glory, but it is the combination of accuracy and reliability that ultimately tell the tale on any firearm.

From the bench: Accuracy

With the major players in place – a great trigger, long barrel, smooth action and nice fit, accuracy and reliability define the R1 Hunter. We spent plenty of time on the range with every variety of 10mm ammunition we could find, which by the way, is a caliber that now has regular shelf space at most retailers. We had a mix of bullet weights and types, including: Remington UMC 180 grain FMJ, Barnes VOR-TX 155 grain copper HP, Sig Sauer V-Crown 180 grain JHP, Sig Elite Performance 180 grain FMJ, Winchester 175 grain Silvertip HP, and Hornady Custom 180 grain XTP.

From the bench, we marked average 25-yard groups at 1.850 inches and the best three-shot groups at 1.19 inches. At 35 yards, groups opened up slightly, but were not terribly expanded from that of the 25-yard targets. With some practice, it was not uncommon to hold sub-2-inch groups at that range, even when firing with some degree of speed as one might on a hunt. While I’m not a practiced handgun hunter and wouldn’t feel comfortable taking 50-yard pistol shots on game, I was pleased to find that my bench shots from the R1 Hunter remained well within a deer’s kill zone at 50 yards. In fact, there was surprisingly little bullet drop at 50 with our sights set dead-on for 25. 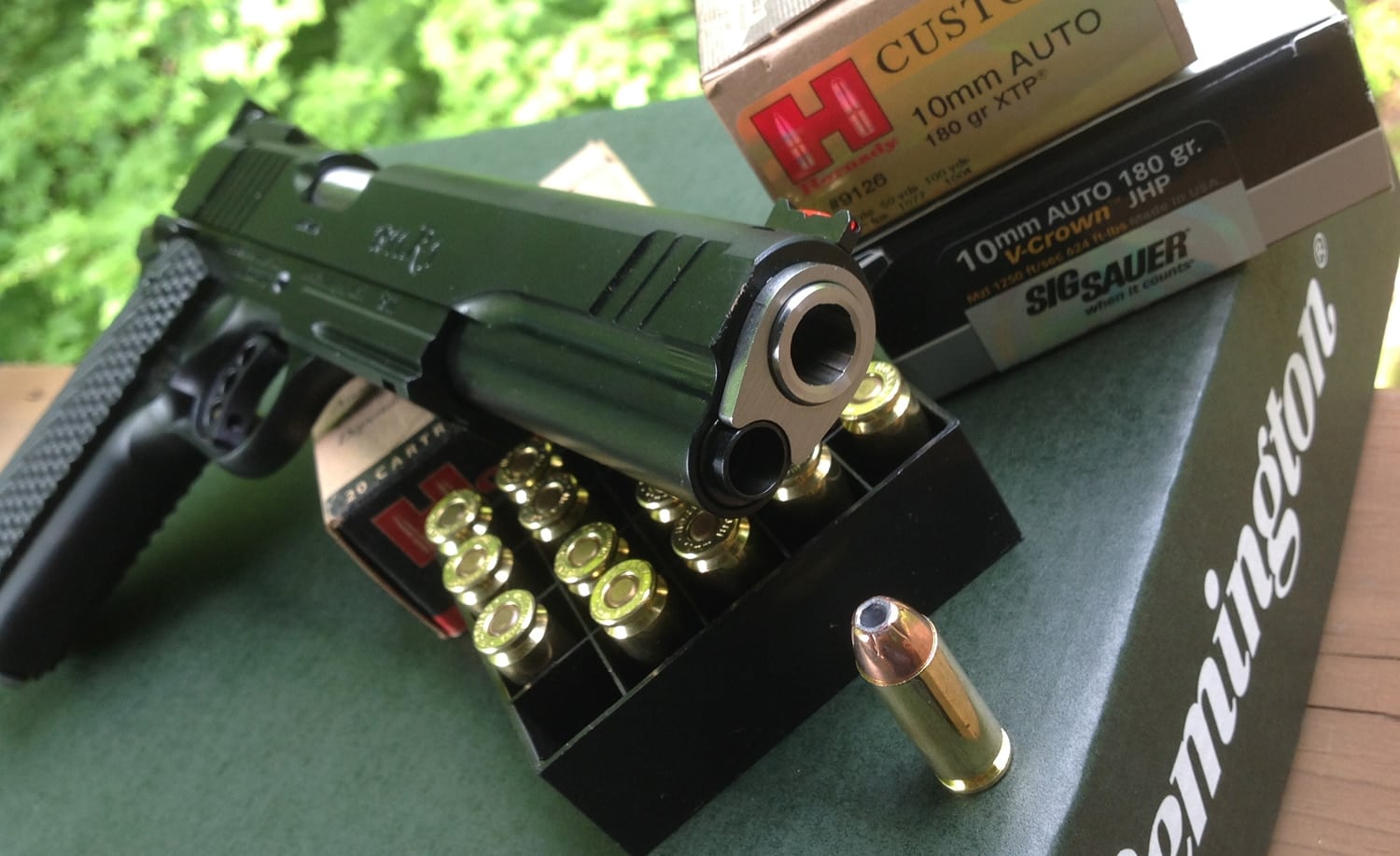 For testing, we used a range of 10mm ammo with the Remington 1911R1 10mm pistol. (Photo: Kristin Alberts/Guns.com)

All that impressive handling and accuracy, however, came with a very unwelcome partner — reliability issues. With a quick lube and once-over out of the box, we hit the range. Three rounds of the first magazine failed to feed, with one failure to eject. The second mag fared only slightly better. Though things improved markedly from there, we do not expect to have these issues from a high-end hunting pistol. A number of FTF’s occurred with every brand of ammo tested, though the FTE’s ended after the first 40-50 rounds. Even with three different shooters working from multiple positions – bench, off-hand, and shooting sticks – the issues continued, with an average of one-two failures per mag.

There is a ray of sunshine behind that dark cloud, however, as the gun seemed to break itself in to greater reliability with increased round counts. Once we hit the 130-150 round mark, things were running pretty flawlessly, though one of the two provided magazines seemed to have more issues than the other. Nonetheless, it’s a tough sell to spend the money on a gun that doesn’t come out of the box ready to roll, especially when it’s a hunting pistol expected to perform when one shot makes or breaks a hunt. We will be reaching out to the company, running more rounds through the gun, and exploring this issue in the future, so keep an eye on Guns.com. 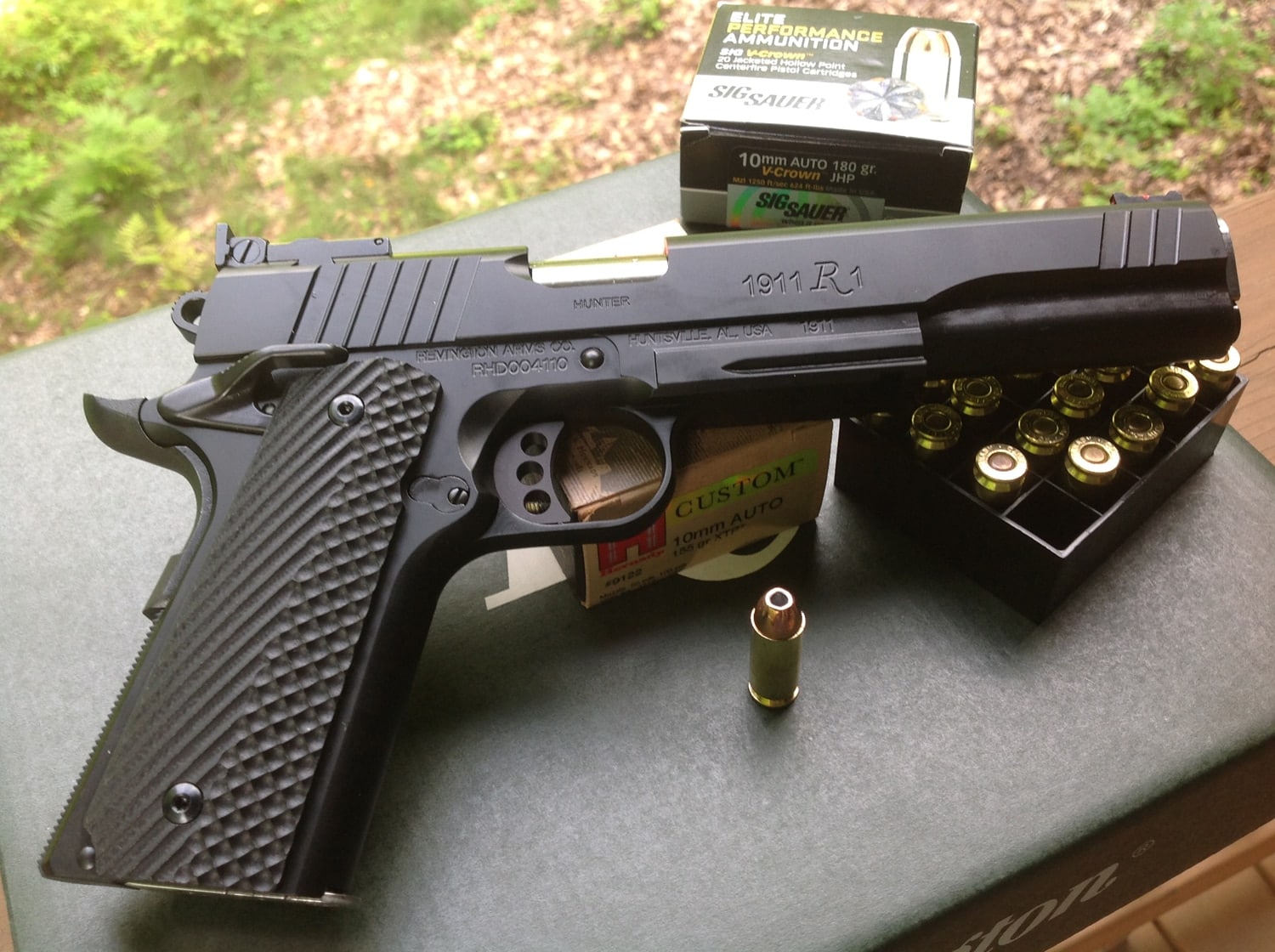 Remington’s 1911 R1 Hunter is one attractive, accurate and capable pistol – as long as it can overcome the reliability issues we experienced. Though it has some sweet features, including the adjustable trigger, the steep retail price makes this a tougher sell than it would be, at say, a grand. Whether we received a fluky pistol or the gun simply requires an extended break-in period, we’ll be working more to get the full scoop on the R1 Hunter as deer and bear seasons are upon us. With those kinks cleared up, this 1911 Hunter would easily be one of the lightest recoiling, most accurate 10mm hunting pistols to hit our range.