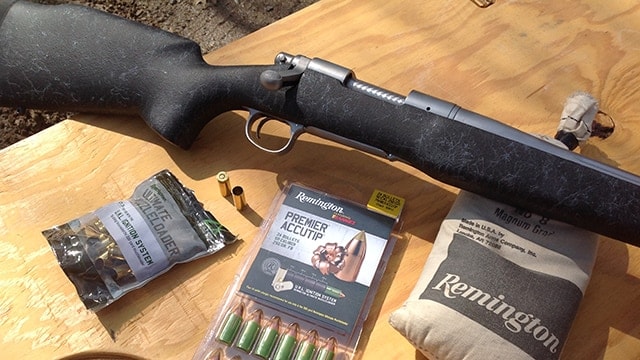 The stainless Remington UML looks and feels like any other Model 700, but sets a new bar for muzzleloaders. Achieving factory accuracy and performance requires using the company’s primed cases and Premier bullets. (Photo: Kristin Alberts/Guns.com)

If a hunter told you 30 years ago they had killed a deer at 200+ yards with a muzzleloader, the listeners would have laughed and passed another pop. Though modern inline muzzleloaders have been stretching effective ranges, it was still a surprise when Remington introduced the Model 700 Ultimate Muzzleloader several years ago as ground-up redesign with claims of 300-yard accuracy and power driven by a new charging system. Now that we hunters have had plenty of time to get acquainted with the UML, answers are emerging on whether this is the new face of inline muzzleloaders or just another flash in the pan. Here are ten things you need to know.

What is the UML

First, we must understand the UML. Looking like a centerfire bolt gun, the Ultimate Muzzleoader uses a closed breech system. The UML ignition system requires a “uniquely-sized” brass case primed with Remington 9-1/2 large magnum rifle primers. These “rounds” are push fed into the breech by the bolt, creating a gas seal with the flash hole of the primer. Though certainly unconventional in the blackpowder realm, this would theoretically allow greater ignition, power, and ultimately, range. The company considers the UML a “super magnum” .50 caliber with a longer lethal range due to a two-part tag team between the proprietary ignition system and special bullets. 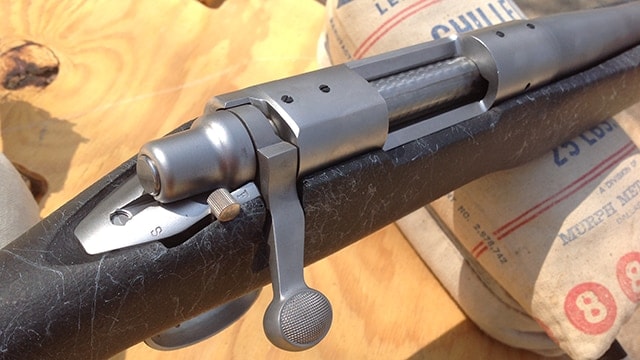 The matte stainless finish is at once durable and attractive. Note the drilled and tapped receiver for easy scope mounting with standard 700 bases. (Photo: Kristin Alberts/Guns.com)

1. About the light-up: The UML Ignition System utilizes hotter-than-standard-magnum primers to burn up to 200-grain loads. The whole affair would be a lot sweeter if the cases were of standard size that could be sourced from another caliber, but at least they are re-primable, easy enough with a hand primer even if you don’t reload. I wouldn’t tinker with the system too much, as the brass is designed to completely seal the flash hole. If you choose to simply buy more, another bag of 24 runs $27.99 at retailers.

2. That 200-grains of powder packs a wallop: Speaking of which, if you ever thought 150 grains of black powder pellets had some push-back, you ain’t seen nothin’ yet. Because the 700 UML is a heavy-built gun, recoil is stout yet still manageable. On the plus side, the primer system does allow all that powder to burn cleaner and more completely than we expected, and is the energy behind this train. 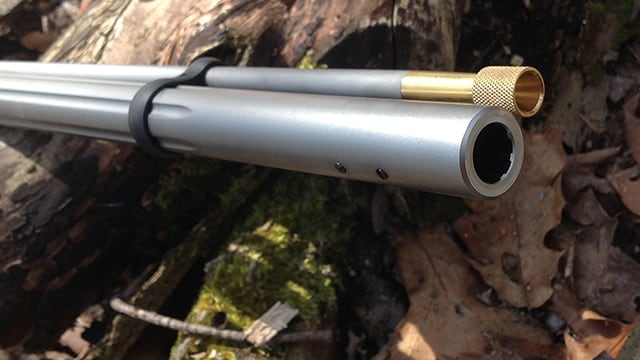 The business end of the UML. The loading rod seats snugly and does not work loose with firing. (Photo: Kristin Alberts/Guns.com)

3. It’s a Tidy Gun: The UML is cleaner and easier to maintain than many other muzzle loaders, due in large part to the ground-up redesign of the priming, breech, and ignition systems. The flash channel is purported to stay cleaner for follow-up shots, and there’s no true breech plug either. Because the primed case seals the flash channel, the breech does indeed stay clean. Best of all, powder residue in the barrel in almost unbelievably non-existent, and we found ourselves cleaning every dozen shots or so not because of powder fouling, but plastic from the sabots.

4. It’s an FFL gun: The interesting factoid is that the UML requires shipment to an FFL, due to the fact that this is indeed built around the venerable Model 700 action. As we’re aware, no other muzzleloader is bound by such regulation. On first glance, most shooters assume the UML to be just another centerfire 700. 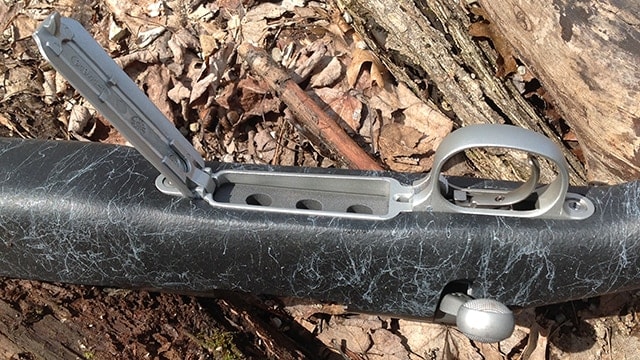 What looks like a standard floorplate on any rifle is actually a storage compartment for the primed casings on the UML. (Photo: Kristin Alberts/Guns.com) 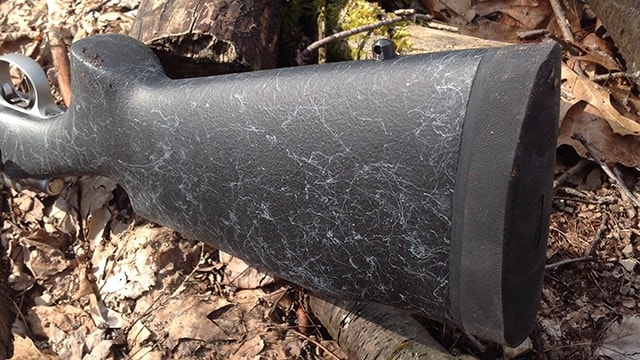 5. Stick to the Plan: The UML reacts best when used with the company’s prescribed loads. To achieve their claims, the company recommends a specific diet. In addition to requiring the primed cases, they include a pack of their Premier AccuTip bullets and suggest stacking 200 grains of Triple Seven pellets under the 250-grain bullet. The combination should, according to Remington at least, remain accurate and lethal at 300 yards with factory velocity of 2400fps. If all this holds true, that’s as close to a centerfire as any black powder gun has come. We found accuracy, if not magical, to be superior at extended ranges when compared to our go-to inlines, and 100-yard groups were right at minute of angle.

6. 300 yards is a tall claim: However, not entirely out of the line with significant practice and controlled conditions. At almost nine pounds, this is not a blackpowder rifle to carry walkabout on hunts and is naturally more well suited to blind hunting where a nice rest is an option. The 1:26 rate of twist is also different from many on the market at 1:28, but for whatever scientifics, it works. On a calm day, from the bench where the UML excels, we were able to consistently put five-shot groups in a deer-target’s heart/lung vitals. 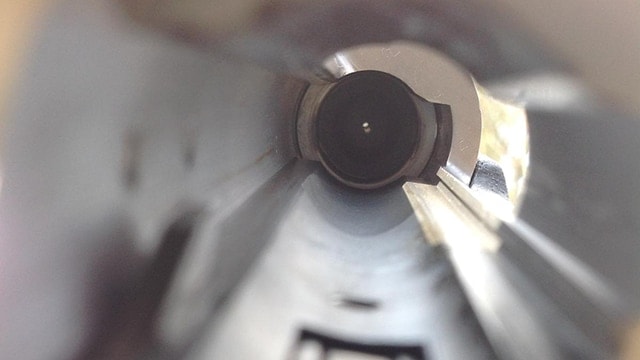 Built on the Model 700 action, the receiver is unlike other muzzleloaders on the market. In place of a standard plug is the removeable breech device which seals completely against the primed cases. (Photo: Kristin Alberts/Guns.com) 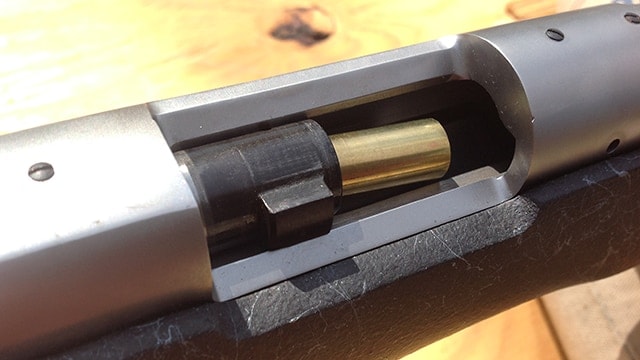 7. Exceptional trigger pull on a black powder rifle: While the system steals the show, the trigger is noteworthy as well with the company’s X-Mark Pro adjustable. The X-Mark external adjustable trigger may be one of the sweetest ever found on a muzzleloader. Adjustable from two-and-a-half to five pounds, ours broke at just under four pounds on a Lyman gauge, far exceeding most comparable muzzle loaders on the market.

8. The scope: Modern muzzleloader scopes are excellent companions for the UML with its extended range capabilities. My chosen match for this love connection is the Nikon Inline XR optic, with its silver finish to match the gun and the BDC-300 reticle lines up well with the loads at distances from 50-300 yards. As optics are not allowed in all states and hunting seasons, it is important to note that our UML did not ship with iron sights, though it is drilled and tapped for them. 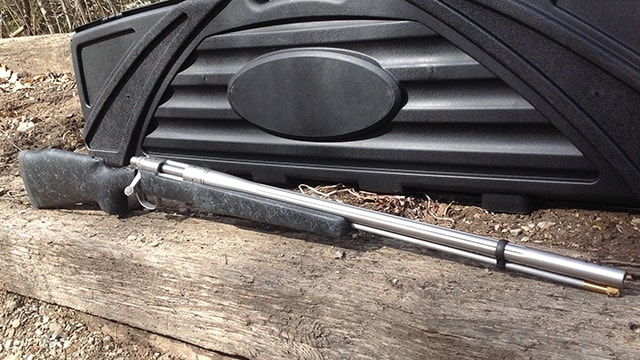 The Remington UML is a pricey buy at close to $1,000, but it ships in a hard case and holds serious appeal for the most serious, non-traditional blackpowder hunters. (Photo: Kristin Alberts/Guns.com) 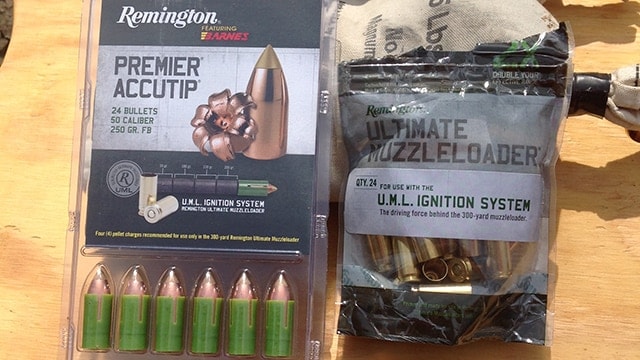 Getting the most from the UML requires using the company’s suggested components, in this case their Premier bullets and the primed casings, along with Triple 7 pellets. While we experimented with different brands of pellets and bullets, these did indeed perform best at extended range. (Photo: Kristin Alberts/Guns.com)

9. No more bumbling for primers: Unlike a standard rifle bolt, the UML’s bolt does not have an ejector to toss the case, but rather holds it there in extraction for simple removal. This is fine, since you really don’t want to lose those little buggers anyway, though they are a heck of lot easier to handle than 209 primers. In a nice move, spare primed cases can be stashed in a special compartment below the floorplate for even quicker reloads.

10. Looks and pedigree are on point: Though our test rifle came with a high-end synthetic stock, there’s a sleek laminate version as well. The Bell & Carlson stock is one of our favorite parts of the rifle, it looks good and is ideal for foul weather hunting. The stainless receiver and fluted heavy barrel are fit companions as well. The UML’s capability doesn’t come cheap, with MSRP on both the synthetic and laminate versions around $949-$1015.

The UML now several years old and selling from $750-900 depending on configuration, that’s a tough bill to justify on a muzzleloader, but this is not your ordinary inline. If you have the budget and you like to hunt blackpowder seasons, this is a ready companion. While no gun replaces the need for considerable range time, this rifle can back up its claims.