There are two camps of handgun hunters: modern and traditional. Yet, Sturm, Ruger & Company’s new Super Redhawk 10mm revolver blends them together nicely while setting a new course for the cartridge.

What makes the 10mm Auto so successful is that it’s one of the hardest hitting pistol rounds and functions well as a hunting round. But it’s a different story in a wheelgun where cartridges like the rimmed .41 Magnum or .44 Magnum hold ballistics that are equal to or superior than the 10mm.

While ballistically the cartridge may not be worth getting cranked up about, there’s still a reason Ruger started producing 10mm revolvers. With less pressure and a heftier weight, the shooter will feel less recoil with a 10mm than a .44 Magnum. On top of that, a 10mm revolver gives shooters the ability to fire .40 S&W, which is just icing on the cake for fans of the popular pistol round. 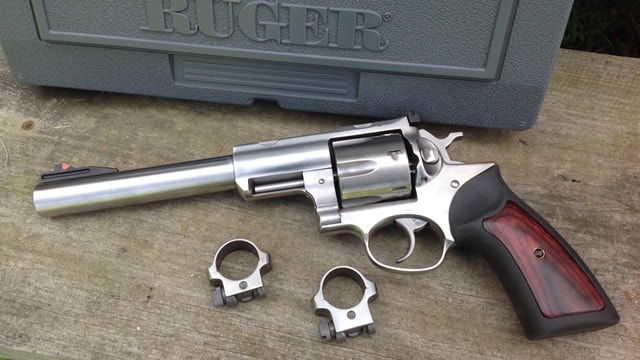 In terms of maneuverability and hunting use, the Super Redhawk is larger in both stature and weight when compared to comparable longslide 6-inch barreled pistols of the same chambering, but that extra length wrings more ballistically from the 10mm while the weight negates recoil.

The 10mm chambering is a hot one for semi-automatic pistols. To thwart any issues in the debut revolver, Ruger built the Super Redhawk with a triple locking cylinder that latches at the front, rear and bottom for both security and alignment. As with comparable Ruger Super Redhawks, this one is also reinforced with additional metal at the top strap, sidewalls and barrel mounting areas, all geared to handle heavy hunting loads.

The double-action revolver has a 7.5-inch barrel, a six-round capacity and an overall weight of 53 ounces. Features include integral machined mounts on the barrel rib for scope rings, a transfer bar safety, cushioned rubber grips with a hardwood insert, and a fully-adjustable rear sight aligns with the red-ramp front. The gun ships with three full-moon clips that are necessary for ejecting spent cartridges and can also double as makeshift speed loaders. Retail price is $1,159. 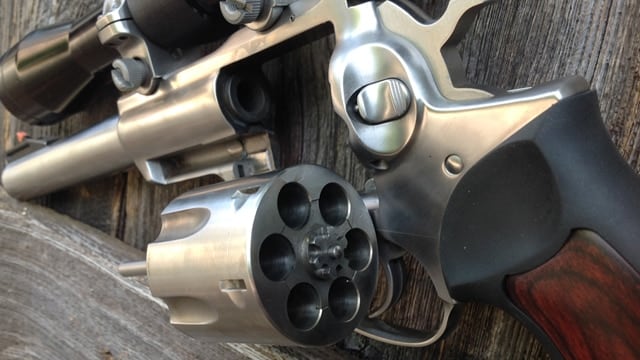 Detail of the cylinder shows the six round capacity. Note the cylinder flutes are staggered away from each chamber for maximum strength. Because the 10mm is a rimless round, moon clips are needed for the star ejector to do its job. (Photo: Kristin Alberts/Guns.com)

As expected, the gun functioned flawlessly. We did our accuracy testing from the bench with sandbags, and found the best 50-yard five-shot group to fall just a hair under 2 inches, with most repeatable groups at 2.25 inches. From shooting sticks, even when firing double action, we felt confident placing the round within the critical vitals of our target at 50-yards. Accuracy is as expected for a hunting revolver, where we would constrain ourselves to not much further than the 50-yard range for clean kills, though experienced handgun hunters would likely extend those effective ranges.

The heavy-duty moon clips are necessary for both ejecting spent 10mm rounds and for safely chambering and fire the shorter .40 S&W. Though the company advises that spent casing would need to be punched out manually after firing 10mm rounds sans moon clips, we found that it was easy enough to either shake or pull the casings free, so no concern should one forget the moon clips in the field. 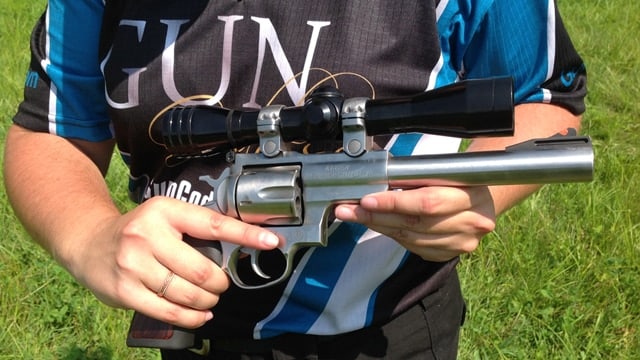 The new Super Redhawk in 10mm is as much a looker as it is a shooter, from the matte stainless to downrange performance. (Photo: Kristin Alberts/Guns.com)

With our scope mounted and a cylinder full of medicine, the Super Redhawk tipped the scales at just under 4 pounds. That’s a hulky handful, no doubt, but it made the 10mm round a pleasure to shoot. Recoil is more than manageable with the fairly soft rubber grips that fit the hand well. Single-action trigger pull measured at 4.75 pounds on our Lyman Digital Gauge. Naturally, the double-action was off the charts, albeit slick and smooth. Especially when worked with time in single action, trigger quality aided accuracy.

Lines and finish on the Super Redhawk are clean and modern. The matte stainless turns some heads yet remains subdued enough not to draw undue attention in the hunting woods.

Whether you already own a 10mm pistol or are a fan of quality stainless hunting wheelguns in alternate chamberings, this wonderfully overbuilt Super Redhawk has a ready market, and those shooters will be over the moon with this new addition to Ruger’s lineup.