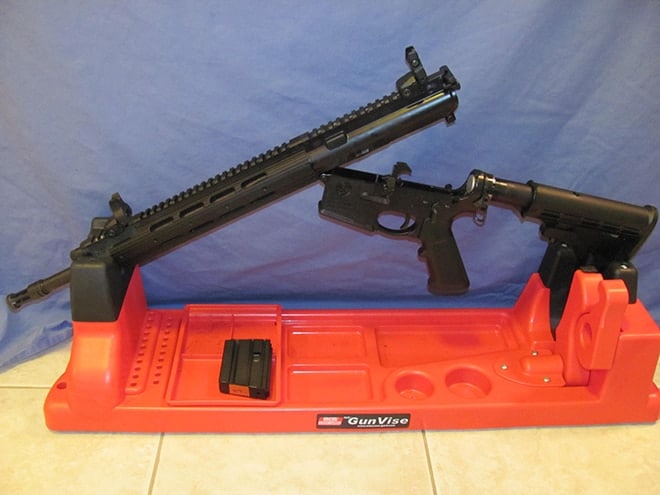 The AR-15 market is so saturated with different makes and models that it must be nightmarish for manufacturers to try and make a product stands out. We’re in an age of polymer lowers, .50 caliber uppers, and mirco electronic sights mounted on top of glass sights with iron sights for backups. You can get high end, tricked-out rifles for thousands of dollars; there’s affordable but still-reliable barebones options; and it’s never been easier to piece together an AR with your own hands and an online shopping addiction.

So when a major manufacturer decides to jump into the AR-15 game, how do they do it? Ruger provides an example of one path that can be taken, for better or for worse, with the SR-556E. 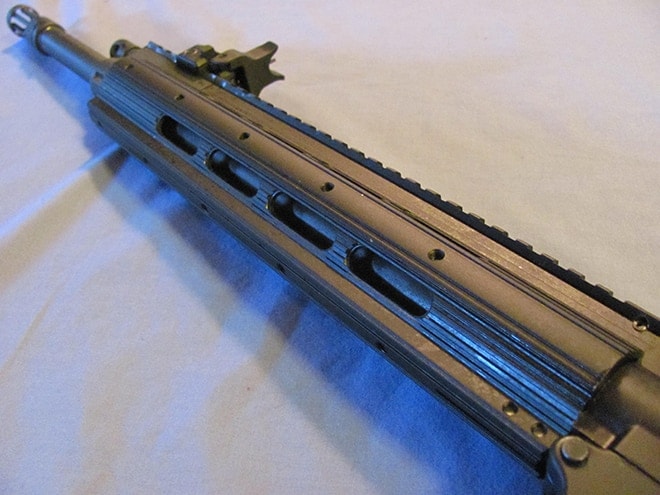 The SR-556E is an economy model of Ruger’s SR-556, lacking certain features like quad-rails on the handguard. (Photo: Andy C)

The SR-556E is the “economy” model of the SR-556 rifle that was introduced in 2009. The original SR-556 is a piston-driven AR-15 with a large quad-railed handguard, three PMags out of the box, Troy sights and expensive secondary-market furniture. The “E” model followed a bit later, offering consumers a cheaper option stripped of some features. It ships with a single magazine, generic plastic furniture, and a totally new hand guard. The package comes in a handy Ruger soft case and retails for about $1200–significantly cheaper than the standard SR-556. 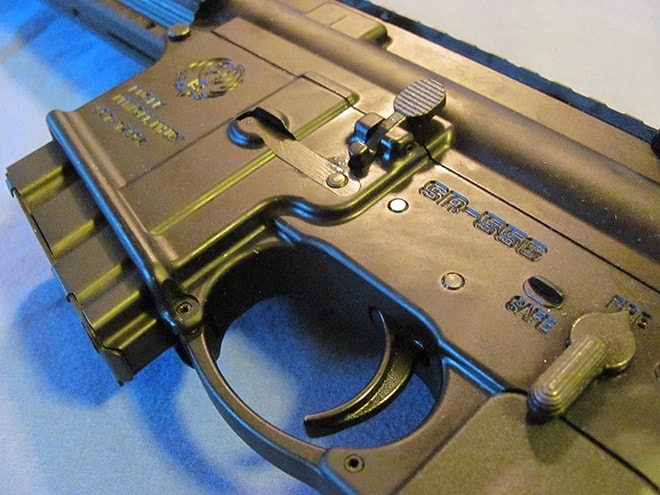 SR-5.56E ships with wither a PMag or a 10-round magazine, depending on your local gun laws. (Photo: Andy C)

At first glance this rifle is unremarkable. If you are familiar with AR-15s then it will meet your expectations. The whole contraption weighs in at 7.5. pounds. It has a dust cover and forward assist unlike some other “Economy” models. It also ships with an interesting narrow handguard and a medium-contour barrel. The barrel is topped with a Mini-14 style flash hider and runs 16 inches with a 1:9 twist. It has a mil-spec buffer tube and chrome-plated gas system components and bolt carrier group. Mine shipped with a single ten-round magazine. If you live somewhere without absurd gun laws, it comes with a single PMag. 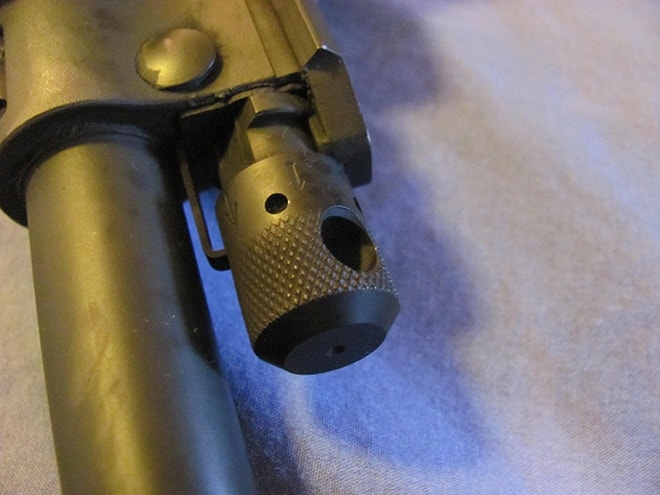 Of note is that this is a piston-system AR-15 from a reputable manufacturer at a pretty good price. Ruger now makes an AR with a more typical gas system so if that’s your inclination you might want to look at one of those. The piston system has a regulator with four settings controlled by a little knob at the front of the gas block, which can be adjusted using a 5.56 cartridge. I’ve left the gun at the “2” setting the entire time I’ve owned it regardless of what ammo I’m shooting or how dirty it gets and I’ve had no issues. 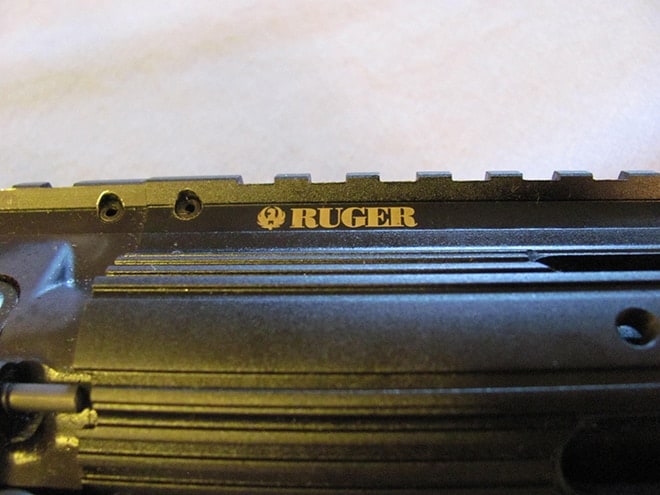 The upper features a full-length rail with some passable Ruger-branded plastic flip-up iron sights. When I say “full-length”, I mean it–the rail runs from the charging handle to the gas block. It affords tons of real estate for those who like to post their optics at varying points on the gun (or who like to hang lots of stuff off their rifle). This helps compensate a bit for the handguard’s lack of rails.

Speaking of the handguard, it’s one of my favourite things about this rifle. It’s aesthetically unique and superbly comfortable. This is a very solid block of metal that’s machined down to be smooth on the sides and bottom, concealing the barrel but leaving it well-ventilated. The handguard is narrow compared to most AR handguards. It has the capacity to accept rails, but requires proprietary rails to be purchased from Ruger separately.

I’ve been using this rifle for two years in various forms of competition shooting, primarily in Service Rifle matches but also various CQB and 2/3-gun events. In those two years, it’s had well over 6000 rounds banged through it, the huge majority of which have been cheap steel-cased Russian ammo. I’ve shot it out to 500 yards in deliberate target shooting and mag dumped cardboard five feet from the muzzle. In this broad range of shooting duties the rifle has performed admirably. 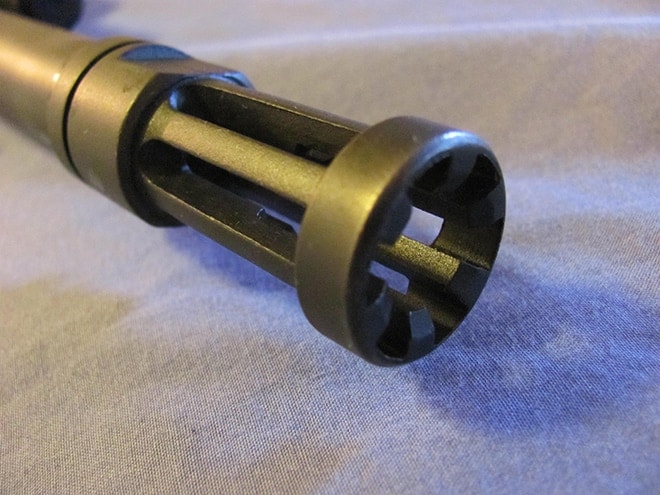 Let’s discuss accuracy first. This is not a match rifle so expectations should be tempered. The trigger is thoroughly unimpressive with typical slack and grit of mass-production AR triggers, and breaks about 6 pounds. The gun’s barrel is a bit nicer than most, I think. It’s heavier profile does help prevent stringing rounds when I shoot it next to government-profile carbine-length barreled ARs. Shooting off a rest with most ammunition, this is a solid 2 MOA gun, with 1.5 MOA groups using good handloads and very patient shooting. With an improved trigger and a better shooter I wouldn’t be surprised if better was possible but for my uses, I’m satisfied. 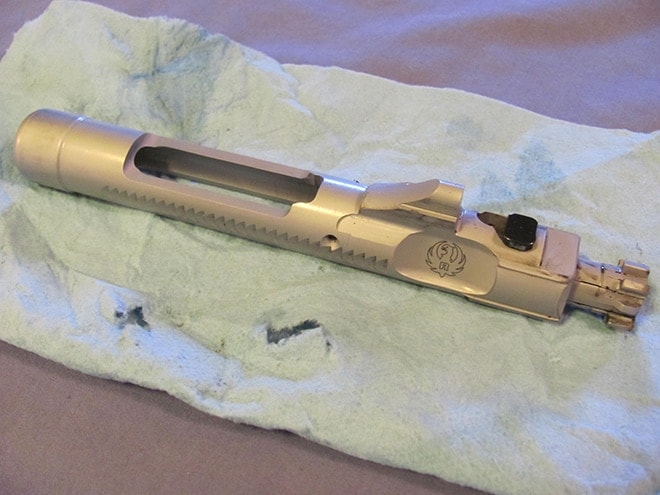 Shooting straight is great, but shooting on command is important too. In this realm I have to say my SR-556E has been much more reliable than other ARs I have used even with the cheapest ammo I can find. I have had one malfunction with this rifle I suspect wasn’t operator error and it only stands out so much in my memory because it was like seeing a unicorn. This rifle has fired and ejected reliably otherwise every time I’ve fired it. It’s a Ruger, so this isn’t a shocker. 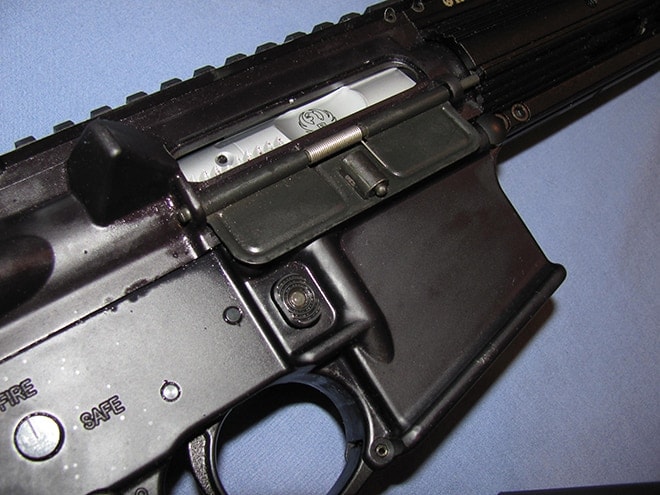 I recommend testing the magwell on the Ruger SR-5.56E before buying, to see if PMags drop out of your particular example cleanly. (Photo: Andy C)

The rifle does have some quirks. First thing I’ll say is it’s tremendously front-heavy compared to most AR-15s. This is when the rifle is bare; adding optics doesn’t help. The balance of the SR-556E is simply not good. When others pick it up, they comment on it almost immediately. While I’m accustomed to it now, and it does help a bit in making fast double-taps, I won’t pretend it’s a redeeming quality. Running with this rifle 500 yards and then holding it up to shoot, magnifies this complaint.

One other point is that my particular rifle did not drop PMags free from the magwell. I have a friend with the same rifle and his does so fine, even the same magazines mine won’t release. This is not an uncommon issue with this rifle, so if you have a giant stack of PMags, you might want to test your SR-556 rifle’s magwell before you buy it. 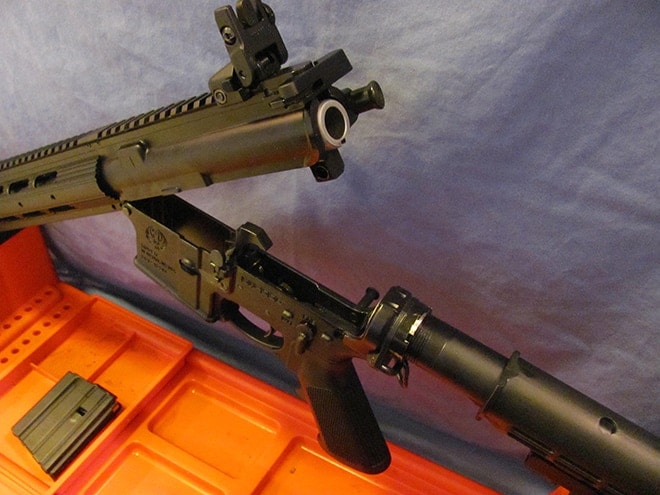 The SR-556E is not well balanced and is quite front heavy. This can help with double taps but is not an asset by any means. (Photo: Andy C)

The SR-556E, despite being an AR-15, still has very typically “Ruger” traits, which I suspect will make or break your decision to buy this rifle. In the “Ruger = Good” column, it’s extremely robust and reliable in adverse conditions, sells for a fair price, and is produced in adequate quantity that if you want one, you’ll most likely see one within a reasonable timeframe. In the “Ruger = Less Good” column, it’s overbuilt. Piston ARs are often heavier than their gas counterparts in the first place. Add in the Ruger tradition of using lots of metal that isn’t necessarily needed and you have a chunky rifle. Also, as Ruger sometimes does, it forgoes a lot of universal interchangeability in favour of proprietary parts. 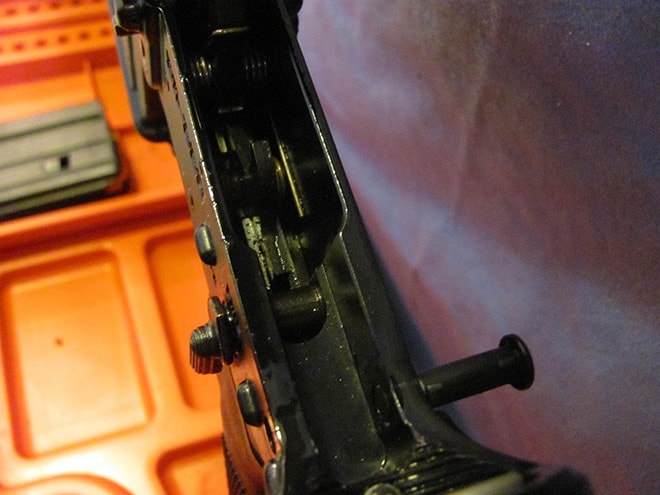 Unfortunately, because of this the SR-556E is pretty limited in modularity, which is, to my thinking, one of the AR platform’s best traits. The handguard and barrel are both more difficult to replace than on a standard AR, and the upper is inflexible due to the monolithic nature of the top rail. Add in a proprietary gas system, and it seems like you have an AR-15 that misses out on almost half of the platform’s modularity. 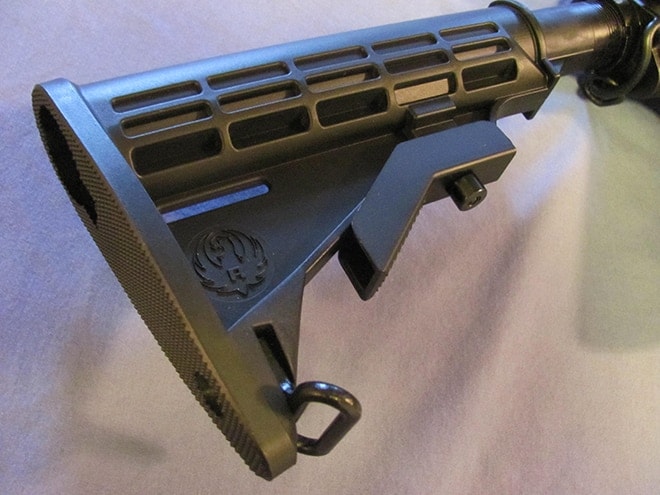 A solid construction, like this adjustable buttstock, make up for the guns lack of aftermarket support. (Photo: Andy C)

Is that much of a problem? I think it is mostly an issue of matching the shooter’s needs with the gun’s capabilities, not something wrong with the gun. Myself, I knew this was going to be purely a weekend warrior’s competition gun and I would not need to mount anything other than optics. I wanted a reliable rifle that shot well out of the box without needing me to change up a bunch of parts to meet exacting specifications. For a user like me, the SR-556E is a good choice.

But is it necessarily a better choice than similarly-priced rifles that afford better modularity? To be honest, unless you’re stuck on a piston gun, I don’t think so. Add in the poor and very noticeable balance of the SR-556E, and you have to really wonder: what compels somebody to purchase this particular gun instead of one of its many competitors? 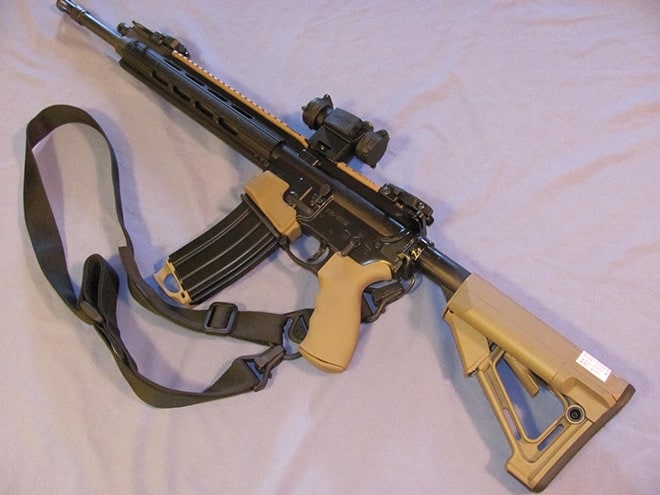 All in all, the SR-556E is a great gun. But I don’t want to be validating my purchase when recommending guns to others either, and I would like buyers to be aware of it’s issues. The fact is the SR-556E has very good competition in a crowded market, and some limitations. Do you love the idea of customizing your rifle extensively, or have a particular discipline that will require high-performance parts to be installed? If so, you might want to look elsewhere.

Do you want a piston gun that will work out-of-the-box from a well-known manufacturer? Do you get truly frustrated by failures, but hate spending money on expensive ammo? If so, consider the SR-556E a top choice. It’s a tough, reliable gun at a reasonable price point for all-around use for a casual shooters like me.