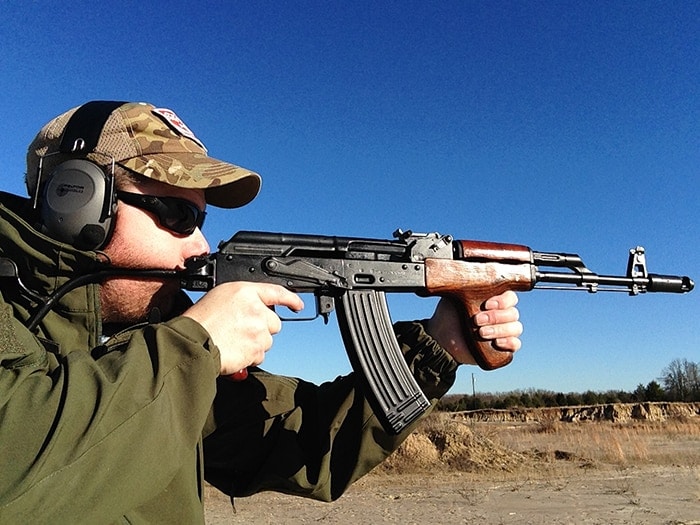 With the rising popularity of the AK-74 in recent years, and the still relatively cheap supplies of 5.45x39mm ammo, it’s no surprise that a number of variants have made it to our shores. One of the lesser known variations is the Romanian SAR-2, which is one of the several civilian-legal versions of the Romanian military Pusca Automata Md. 86, also known as the AIMS-74. 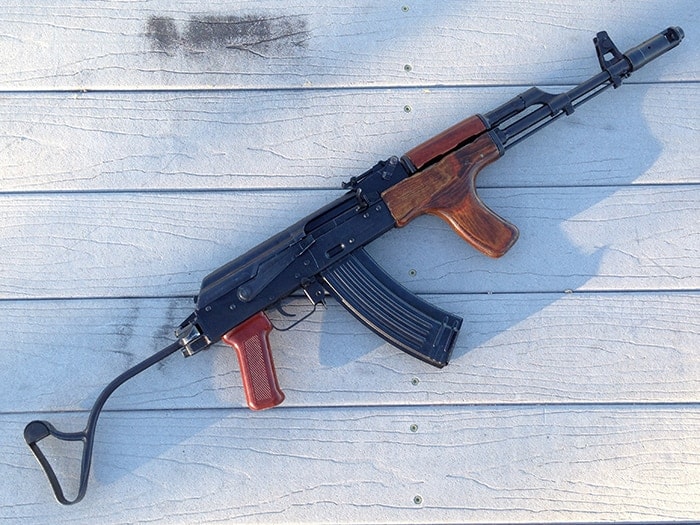 The AIMS-74 was Romania’s answer to the requirement for a rifle that fired a common caliber and used common magazines with other Warsaw Pact 5.45x39mm rifles. The characteristics that marked it from other AK-74 types consisted of the 45-degree gas block, a wire folding stock with the strut offset to the left, and which fits the standard fixed stock trunnion, a pistol grip laminated wood lower handguard and elongated 22mm muzzle brake. It is still in service with the Romanian military and has seen service in Iraq, Afghanistan and Kosovo, where it proved to be a handy, serviceable rifle. 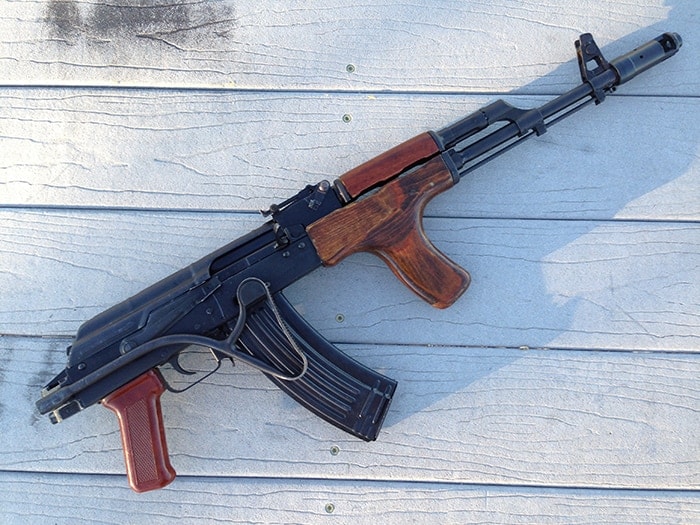 The 5.45x39mm SAR-2 was introduced in the 1990s, and was imported when the 5.45×39 and rifles chambered for it were just starting to show up on dealer shelves. With a retail price in the neighborhood of $300, it was a nice rifle for the price, even though ammunition was a little harder to come by than the more popular 7.62×39.

Later, as the 5.45×39 started to gain popularity, a small number of de-milled AIMS-74 parts kits made it into the country, and there began the trend of converting SAR-2s into semi-auto AIMS-74 clones by replacing the required number of parts with 922r compliant pieces, then adding original Romanian furniture and accessories to make a correct (or very close) copy of the real deal.

The SAR-2 is an excellent base rifle to use in converting to a civilian-legal, semi-auto AIMS-74 clone because it has many of the features considered desirable for that process, such as the 45 degree gas block, upturned charging handle, dimpled receiver and standard dark to medium phosphate finish common to Romanian rifles. 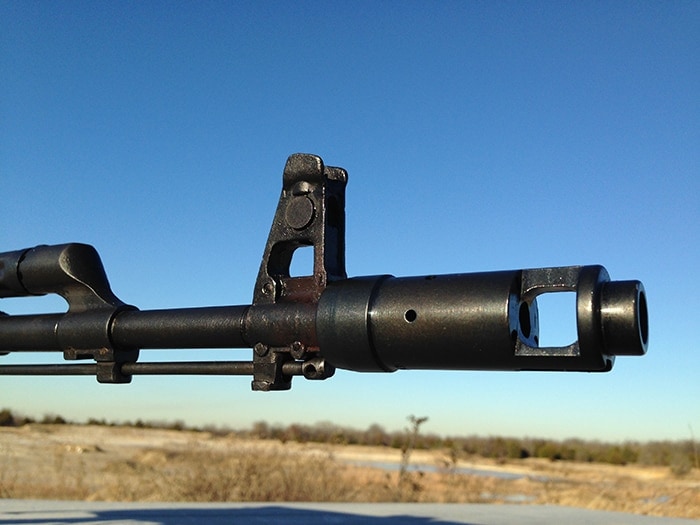 A few changes are necessary, most especially the replacement of enough imported parts, normally five or six, if you intend to use a muzzle device to comply with 922r and allow the use of original Romanian furniture. The most common items to replace with USA-made parts are: gas piston, trigger, hammer, disconnector, magazine follower, one or more parts of the furniture and a USA-made muzzle device if you’re going to replace the front sight tower with an original 22mm front sight assembly.

For a while, parts for this conversion were fairly easy to find, despite the small number of parts kits that made it in, but they quickly dried up to the point that many of the parts for the conversion are practically made of “Unobtanium.” A case in point is the phenolic (Bakelite) pistol grip lower handguard, which now commands prices upward of $350 if you can find one for sale, and even at that price, they disappear within minutes. 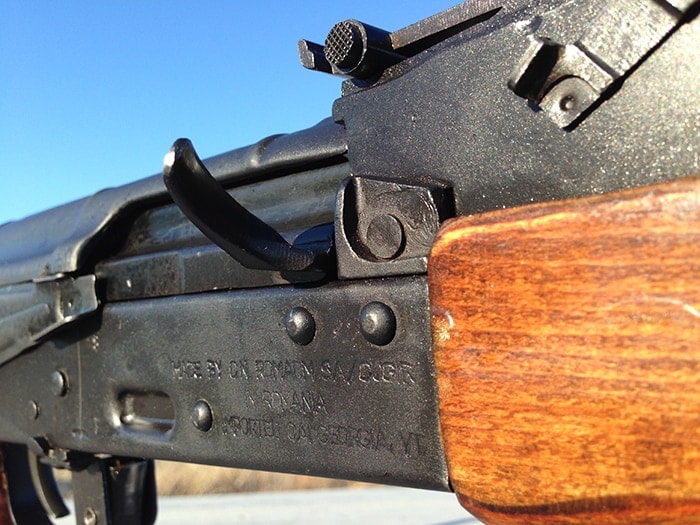 The upturned charging handle allows better clearance for charging the weapon with the stock folded, a unique feature not found on other AK-74 variants. (Photo: Kenny Hatten)

By far the easiest way to get a nice AIMS-74 clone is to buy one that has already been dressed up, or find one that has been built up by a reputable AK smith from one of the now extremely rare parts kits. The other option is to start with a base rifle and add the parts you need over time to make a correct clone of the original.

I bought a partially converted SAR-2 with fixed wood stock and furniture a few years ago, with six original AIMS-74 30 round magazines. The rifle already had the 22mm front sight assembly installed, with a USA-made muzzle device already in place. The rest of the rifle is a work in progress, and over the years I have replaced this part or that in the process of finishing the rifle out as a correct AIMS-74 clone. 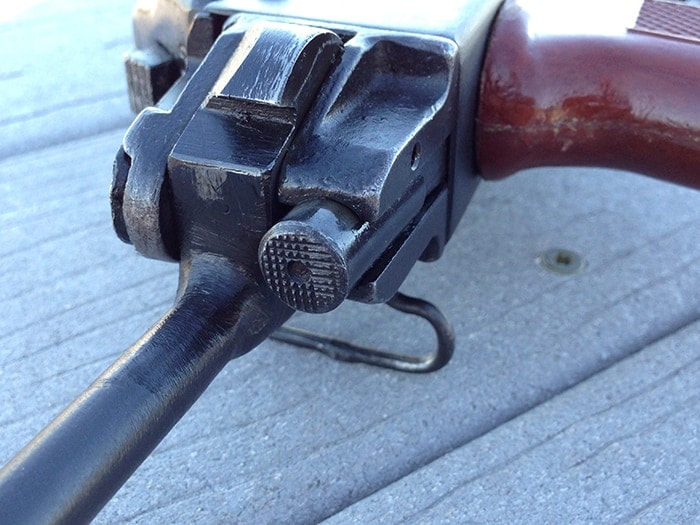 The wire side-folding stock on the SAR-2/AIMS-74 clone is operated by a push-button and is arguably better than the old style lever operated folders. (Photo: Kenny Hatten)

The first item I replaced was the fixed wooden stock, which I swapped out for a Romanian wire side-folding stock.  This particular wire side-folder is offset to the left and operated by a knurled push button instead of the more common lever type that is similar to the German and Polish wire folders. It’s still available in some numbers, but getting harder to find, like the rest of the parts for these rifles, but prices are still holding in the $70-$80 range.

That done, I replaced the lower handguard with one from a Romanian “G” AKM kit, which, from photographic evidence and my observations in Afghanistan, is correct for this rifle, as Romania evidently designed the AIMS-74 to use as many older AKM parts as possible, especially things like stocks, handguards and pistol grips. The muzzle device is an older model AK-74 brake from AKUSA, made to fit the Romanian 22mm front sight assembly, and while it looks pretty close, it’s just a tiny bit too short, as the original muzzle brake was longer than a normal AK-74 brake because of the smaller diameter. Nonetheless, it looks the part and functions just like the original, so no worries. 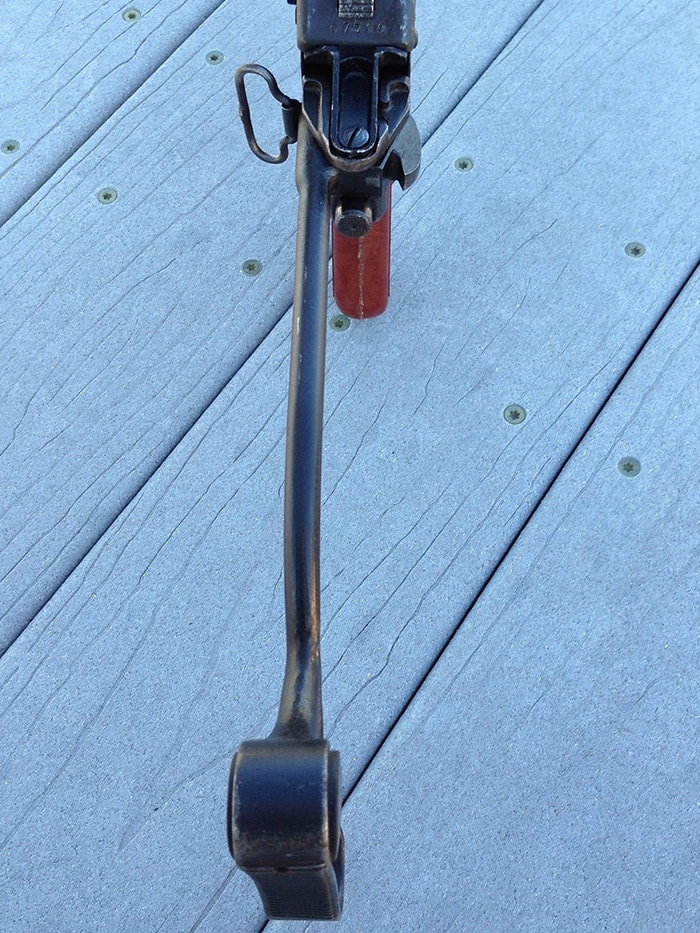 Top view of the SAR-2/AIMS-74 wire side-folding stock, showing the distinct offset to the left. This aids the shooter in establishing a better cheek weld and more easily sight down the centerline of the sight plane. (Photo: Kenny Hatten)

The pistol grip is a reddish Romanian Bakelite part with the inverted checkering distinct to Romanian AKs, and I believe this one to be correct from what I’ve seen on other original rifles of this type. The standard AIMS-74 pistol grip appears to be a marbled orange Bakelite part, but fortunately, the Romanians didn’t waste parts, and used older AKM furniture on the AIMS-74 as a cost saving measure.

My AIMS-74 clone isn’t quite done yet, but it’s still a good-looking rifle that is one helluva lot of fun to shoot, and quite a bargain even today, with prices for bone stock SAR-2s still hovering between $500-650, or less if you have cash in hand and can jump on a deal quickly. Fully dressed AIMS-74 clones can command prices over $1000, so building one over time is a good way to get the same result without a huge initial outlay. 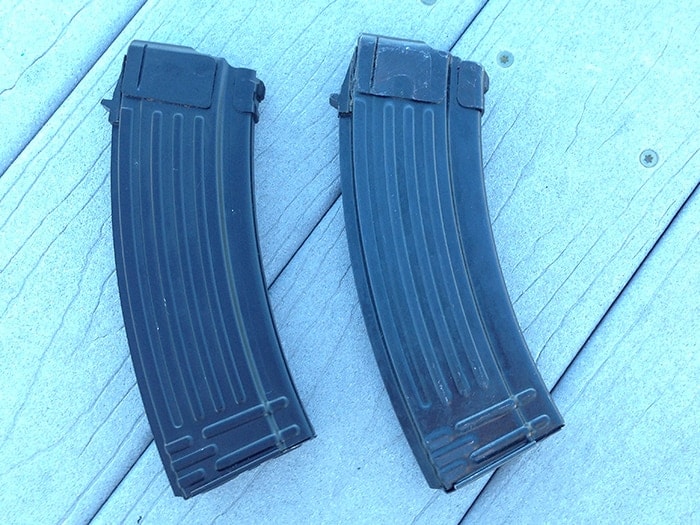 Shooting the SAR-2/AIMS-74 clone is just like shooting any other quality AK-74 semi-auto variant, with low recoil, great accuracy and rock solid reliability that this family of weapons is known for. The wire folding stock, which is a little rough to shoot with on a 7.62mm AKM, is very comfortable on a 5.45mm rifle, locks up tight and folds neatly to make storage and transport a little bit easier. The offset stock strut makes aiming just a little bit easier, and enables a better stock weld than center-mounted wire side-folders, but it’s not the best for left-handed shooters.

Accessories and magazines are still fairly common for these rifles, but they are getting rarer and more expensive every day. Apex Gun Parts has original magazines for $45 apiece, and the price will only go up, but I’ve found that Polish steel Tantal magazines will fit and feed just as well as original Romanian magazines at a lower cost. Polymer AK-74 magazines are hit-or-miss with these rifles, however, and only two out of ten of my Bulgarian Circle 21 magazines will even lock into my AIMS-74 clone. If you have lots of polymer AK-74 magazines to spare, then a little work with a Dremel tool can shave off enough material from the magazine locking lug to make it fit a Romanian rifle. 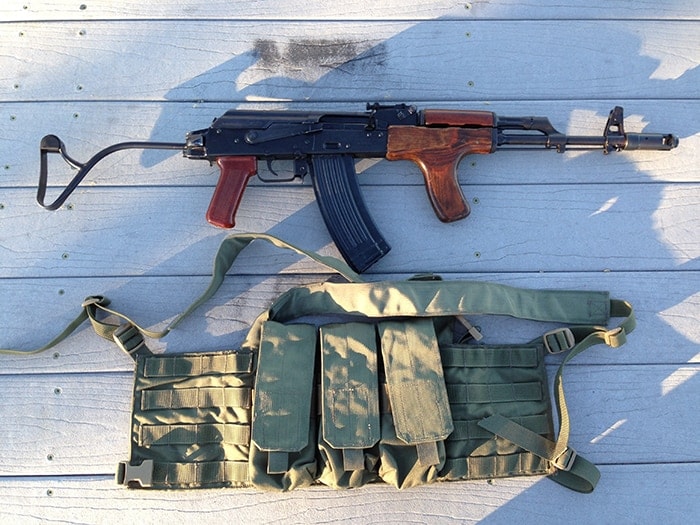 Before buying any Romanian AK variant, it’s a good idea to perform a quick quality control check to inspect for common issues like canted gas blocks or front sight assemblies, but other than that, most of these rifles are quite nice, and good to go right out of the box. For those who are mechanically inclined, even the canted gas blocks and front sight assemblies aren’t deal-breakers, and are easily fixed with a couple of hours’ shop time, simple tools and a little patience.