Shooting is an expensive hobby, even for paid professionals. People like Jerry Miculek have as much — if not more — money invested in ammo, training and equipment as a medical doctor has in a medical degree.

If we follow Malcolm Gladwell’s 10,000 hour rule, which suggests it takes a person 10,000 hours of practice to master a skill set, Jerry has spent at least 10,000 hours behind the trigger. If he fires an average of 100 rounds per hour we have a total of 1,000,000 rounds of ammo spent. For the sake of brevity and the fact that Jerry reloads his own ammo, let’s assume an average cost of $5 a box (of 50). That brings us to a grand total of $100,000. Once you take into account the cost of equipment, travel, food and repairs that number is closer to $200,000, putting him at or above the cost of the average doctorate degree. (Average cost according to nces.ed.gov is $181,500)

If you want to be as proficient with firearms as Miculek you’ll need to take out a second or third mortgage and tell your kids to find their own way through college, right?

Dry fire practice can help shooters perfect their sight picture, grip and trigger control, but nothing beats range time. Reloading is a good option, but it requires startup money, a dedicated location and a tremendous amount of time.

Then there is another non-traditional, yet more economical solution: training with a .22 version of the pistol and dropping in a centerfire conversion kit when you want to use a larger caliber for home defense or concealed carry. 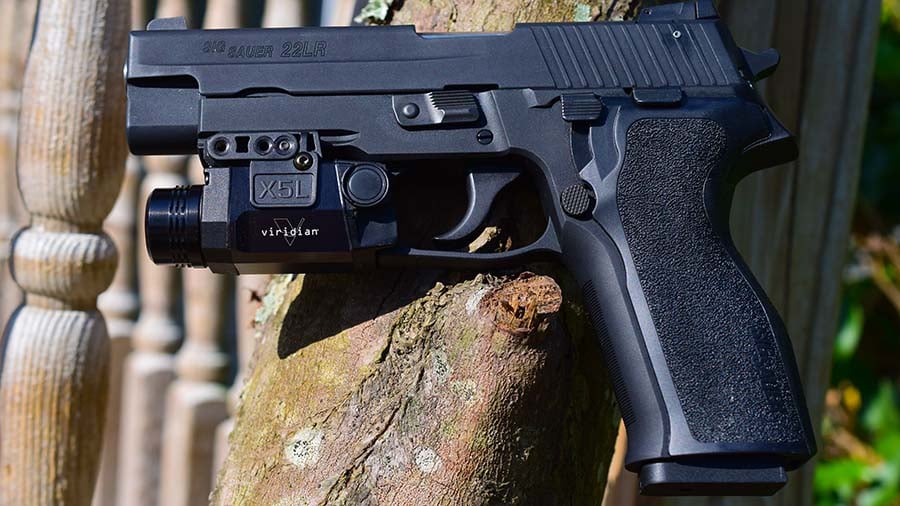 A soft-shooting .22 that converts into a center-fire combat handgun? Really?
(Photo by Jim Grant)

In contrast to the Mosquito, a .22 pistol SIG introduced a few years back, the P226 Classic series of handguns utilize a full-sized frame constructed identically to standard P226 centerfire frames. This is where the Classic truly shines. Unlike most centerfire guns that feature a .22 conversion kit, the Classic is a .22 LR that accommodates a centerfire conversion kit called Caliber X-Change kits. The kits range from $350 to $379, which might seem steep at first, but if you combine the cost of the Classic 22 and a 9mm X-Change kit, it puts you a few bucks under the price of a single P226 9mm pistol. There’s really no reason not to buy this setup.

Having a .22 LR that features a centerfire conversion kit allows the shooter to utilize the exact same trigger and grip on their training pistol as their home defense pistol. Training and muscle memory translate directly across the two calibers, a tremendous advantage. Installing the X-Change is as simple as field-striping the gun, replacing the slide assembly and changing magazines. This takes an experienced shooter no more than 60 seconds. 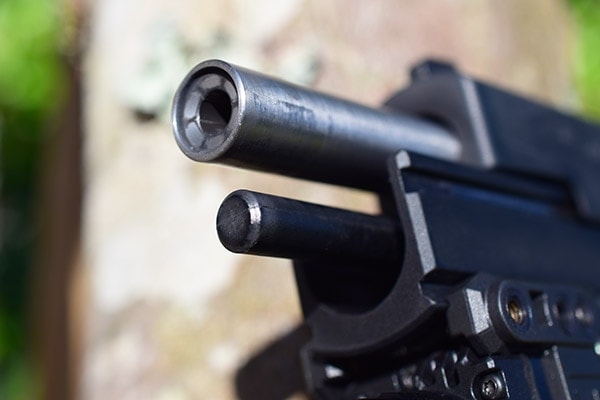 One look at the Classic 22’s barrel tells you it was meant for bigger rounds. (Photo by Jim Grant)

If you’re wondering why everyone doesn’t go this route, there are two main reasons. Number one: most people simply don’t know about the option. Number two: availability. The X-Change kits occasionally have sporadic availability. Although this was especially true during the panic, though it has eased up now, with multiple online sellers carrying the conversion kit.

The P226 Classic is more than just the most financially advantageous choice, it’s a solid training tool and a lot of fun. If you’re familiar with the SIG “P” line of pistols, you’ll know what to expect in terms of fit and finish. A combination of handsome simplicity and rugged durability of the SIG’s Nitron finish. The Nitron finish is the hardest finish I’ve encountered, which is wonderful if I ever decide to sell this pistol, since I run my guns so hard you’d think they offended my mother.

The three-dot sights on the SIG are a nice addition as well. They are fully adjustable for elevation and windage by two set screws embedded in the rear sight. You can substitute the regular sights for photoluminescent night sights for an additional cost. The use of the three-dot partridge style sights is a departure from the “dot-the-i” style sights of older models, but I find both sights to be equally effective. 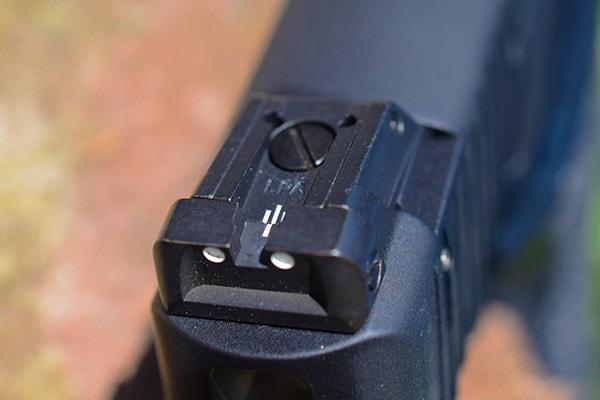 SIG abandoned their “dot-the-i” sights in favor of this adjustable three-dot set. (Photo by Jim Grant)

Since the Classic 22 utilizes a full-sized frame identical to its centerfire big brothers, it also features all the same controls. The de-cocker magazine release is present and the grips are the upgraded E2 variant. Though these grips might not appeal to everyone — they are tacky as all hell and look professionally stippled — they excel in their role. If you are not fond of this new grip, you can change back to the old style, but need to provide your own grip screws. The E2 style grips don’t use any mounting hardware.

The P226 Classic might not be match-grade accuracy, but I landed all my rounds on 8-inch targets from 50 yards away, unsupported and soda cans were in serious jeopardy at half that distance. This level of accuracy is acceptable given its role as a training platform and not a dedicated plinker. Sure, guns like the MK III are more accurate, but the only centerfire pistol it can train you for is the Baby Nambu. Seriously, how many people even know what that gun is, let alone crazy enough to carry one? 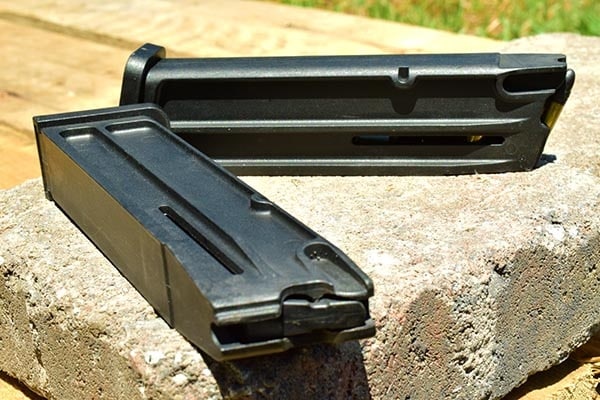 The Classic’s magazines are full-sized, but designed for .22LR (Photo by Jim Grant)

After the 300 round mark, the Thunderbolts began to run more reliably and after 500 rounds they no longer malfunctioned. My advice is to buy a few boxes of various types of .22 online and try them out. Once you find one your gun likes, buy a bunch of it. Ammo prices have certainly risen, but a full case of 5,000 rounds of .22 is still vastly cheaper than half as much 9mm and it should last you years. 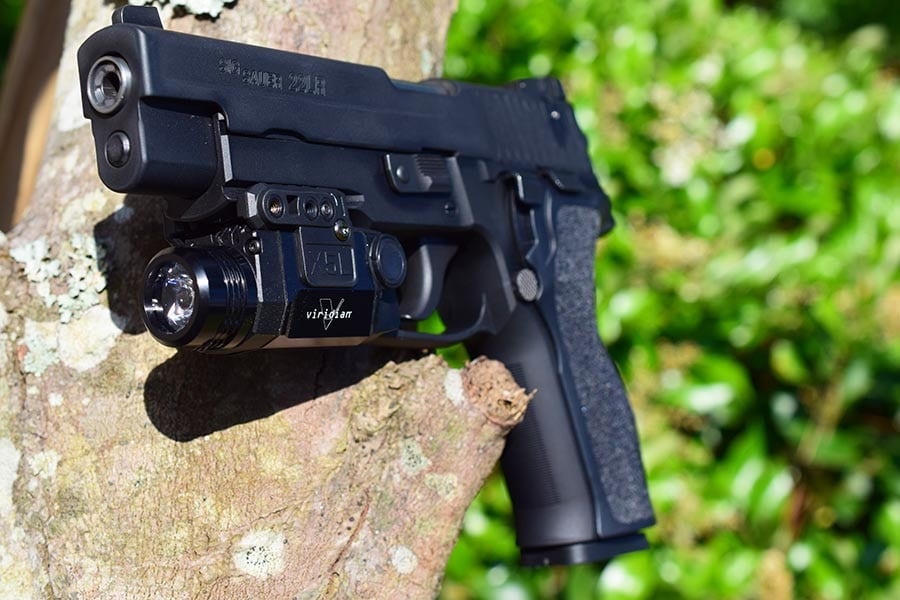 The Classic 22 is one hell of a plinker. (Photo by Jim Grant)

The Sig Sauer P226 Classic 22 is a great investment for shooters who want to get more practice for their dollar and having the ability to change calibers on a whim is a nice bonus. It’s also desirable for people wanting to help younger shooters learn the fundamentals of marksmanship without the distraction of added recoil and noise on the same frame they’ll later shoot heavier rounds from.