I have always been a Smith & Wesson fan, especially for their handguns – from the tiniest J-frame pistols to Dirty Harry’s Model 29, Smith & Wesson delivers, and delivers well.

The pistol in question for today’s review is the Airweight .38, Model 37. If you are familiar with this particular firearm, then you know how many other models are similar, if not almost identical, to the Model 37. I happened to get my hands on one of these cool little revolvers.

It’s small – real small, folks – and also extremely light. I didn’t feel like I was holding a pistol at all; it felt more like a toy. A poor choice of words, I know, but they are the first that come to mind. Some sources say it’s one pound, one ounce, others say it’s 0.94 of a pound. It really doesn’t matter which one of those are correct, because light is light, and one pound is extremely light for a pistol. 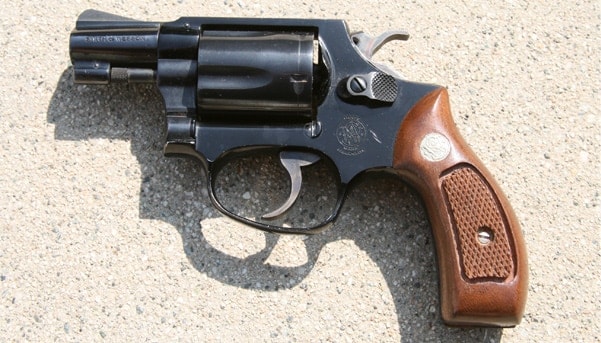 The grips and size of the butt are sufficient, but barely. I have rather small hands and the grip still feels a bit small to me but then again, the entire firearm is minute. The handgrips are wood, and about 3.75-inches long, which is just enough to get a decent grip on the pistol. There are aftermarket grips available, though, which thicken things up for you meat fingers out there.

The Airweight model 37 is the younger brother to the Model 36 “Chief’s Special”, an identical gun but with a steel frame instead of aluminum. The 37 came out in ’51 and went largely unchanged until Smith & Wesson finally dropped them all together in 2006.

In the mid-1950s, the Air Force ordered a specialized version of the Airweight for military police use. This version implemented not only an aluminum frame, but also an aluminum cylinder and barrel. Testing proved that the cylinder and barrel failed pretty quickly due to heat warping, and the model was discontinued.

There have been a few variations of both the Model 36 and 37 throughout the years, such as the Model 36 Gold, which, as you can probably guess, had gold accents throughout the pistol. In later years, Smith & Wesson began offering the tiny pistol with thicker grips, understandably.

The Smith & Wesson Airweight features a two-inch barrel for massive concealed-carry effectiveness. It probably wouldn’t be your first pick for shooting cans off the fence at 50 yards with it, but for up close and personal encounters, the Airweight is hard to beat.

One thing that is unique about the pistol is that the firing pin is actually located on the business end of the hammer, which is something you don’t see every day. I kind of like the design, myself, if for nothing else than its simplicity. It’s also a great conversation piece because it’s highly likely many of your friends have never seen one.

The tiny cylinder holds five rounds-just enough to get you out of a bad situation. The cylinder release is on the left side of the frame and takes a little force to slide so the cylinder opens. Because this is often used as a pocket pistol, I find it a well thought-out feature. The last thing in the world you need, should you have to pull the Airweight in self-defense, is an open cylinder.

Why is the gun so light?

The J-frame is made completely of aluminum, that’s why. Only the cylinder and barrel are constructed of steel. The aluminum frame can handle .38 Special loads just fine, but I wouldn’t recommend trying the +P rounds because the added oomph can allegedly cause the frame to stretch. 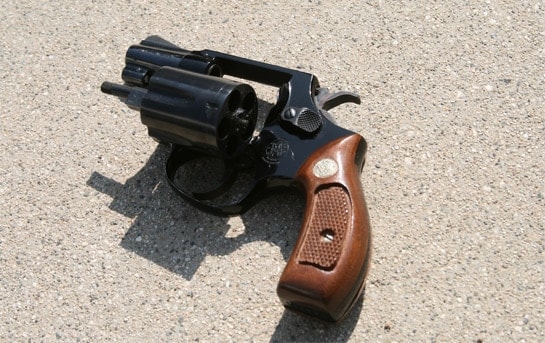 There is some heated debate about the +P ammo, though. Many say that the higher cylinder pressure will damage the gun, but there is also the school that says the +P ammo of today is on par or even weaker than the factory loads back when, and so it’s completely safe to use them. I try to err on the side of safety, though, so the regular .38 Special rounds will work for me.

Obviously, a one-pound, aluminum .38 is going to have a significant amount of recoil. Didn’t think that a little .38 could make your hand sore? Think again. The Airweight packs a punch, even with regular factory loads. For most of us, this isn’t a gun we’ll enjoy shooting all day at the range.

It is a double-action pistol, meaning that it can be operated with or without the hammer pulled back. The pull in double-action mode is quite heavy, but in single-action, it seems just right. Again, because this pistol will easily fit into even the smallest pockets, I think that a heavy trigger pull is a great idea. Many a toe has likely been saved because of it.

Also, because the gun itself is so short, the front and rear sights are closer together, which will effect aiming when it comes to longer distances. Most range reports say that a shooter can average three-inch groups from up to 15 yards. Most shooters say they feel the Airweight could hit a man-sized target at 25, but most accuracy will be out the window.

Used Airweight pistols in really good shape will sell for roughly $450, but my bet is that you can pick one up for much cheaper at a gun show or auction. Keep your eyes open, because deals do come around.

Depending on the age and condition of the pistol and how delusional or not its seller is, I have seen them for as low as $250 and as high as $750. It’s probably fair to ask $450 for a perfect piece, in my opinion, but more than that and things just get silly.

The Airweight I have is an older model from the ‘80s, but the bluing has held up very well, only showing bare steel on the trigger guard, which is common for holstered guns. Because of the steel cylinder and barrel, the gun is a tad nose-heavy, but nothing out of control.

I would personally rate this little pistol very high on the pocket-carry list of available makes and models. The only possible negatives are its extremely short barrel (but again, it’s meant for close-up action) and the extended hammer, which could possibly catch on clothing if the shooter isn’t careful.

That being said, you can’t really go wrong with the Airweight. It’s light, it will shoot .38s all day long, it’s tiny, and it’s a great conversation piece when gun enthusiast friends come to visit or at the range.