The Springfield Armory XD Mod.2 is a new take on an older gun that demands attention from anyone who carries a concealed weapon. While staying true to the original mechanics, the outside of the gun has received a large makeover, to what some would call a significant improvement on an already excellent gun.

In my own humble opinion, it doesn’t get any better than the XD in regards to grip feel, safety features and easy field strip/cleaning capabilities. I have to admit, at first, I was skeptical that Springfield could improve upon the XD at all. But after I thought about what they can do with pistol design, and eagerly looked at pictures of the gun, my thoughts began to change.

This particular weapon, chambered in .45 ACP, came with the standard XD gear that Springfield fans have come to love. I got the hard shell case with foam inserts, holster, speed loader, bore brush, magazine holster, cable lock and two magazines — a standard size mag that is perfect for concealment, as well as an extended capacity one for my beefy hands.

The smaller mag holds nine rounds, and the extended magazine holds 13 rounds. Either way you slice it, this is more than enough firepower to take out any assailants. Especially when you consider that this particular weapon is chambered in .45 ACP. 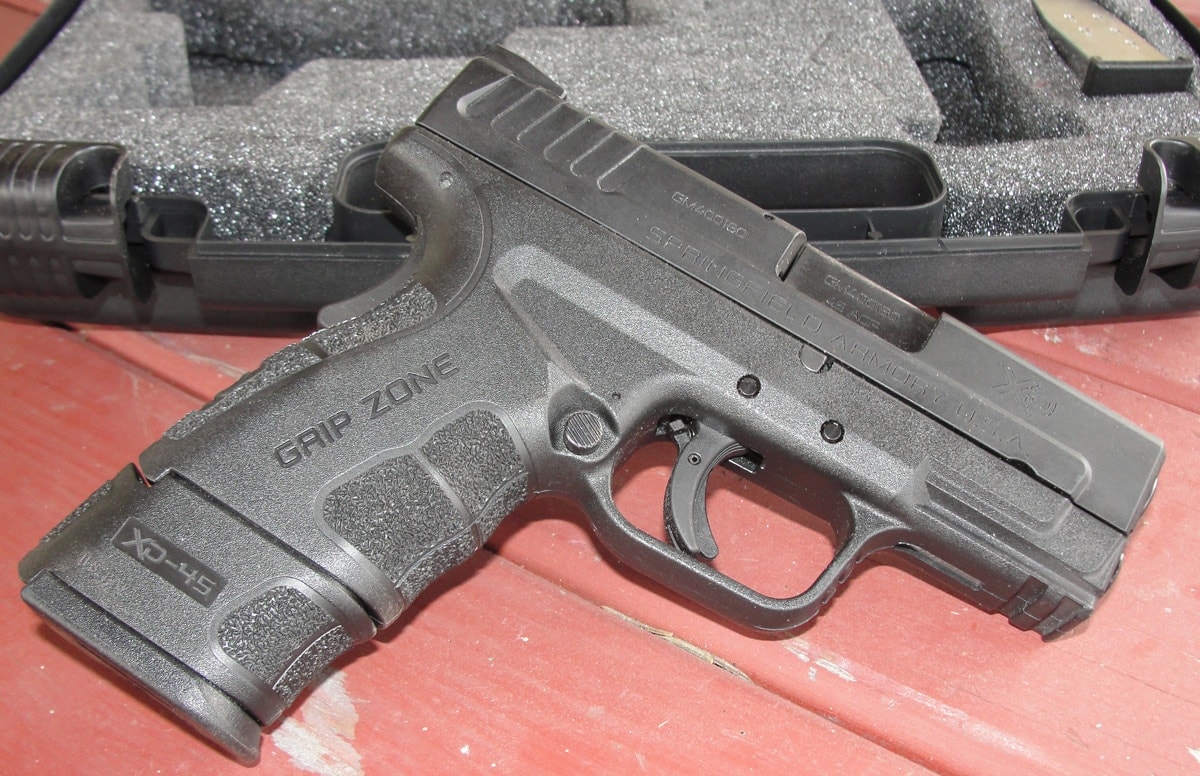 The first magazine I slid into the gun was the short nine-round concealment mag. The pinky finger on my strong hand had nowhere to rest, and slid underneath the gun.

While this isn’t favorable, it was still surprisingly comfortable with the “grip zone” and overall robust size of the grip. With ease, I was capable of hitting my target at 7 yards each time I squeezed the trigger. 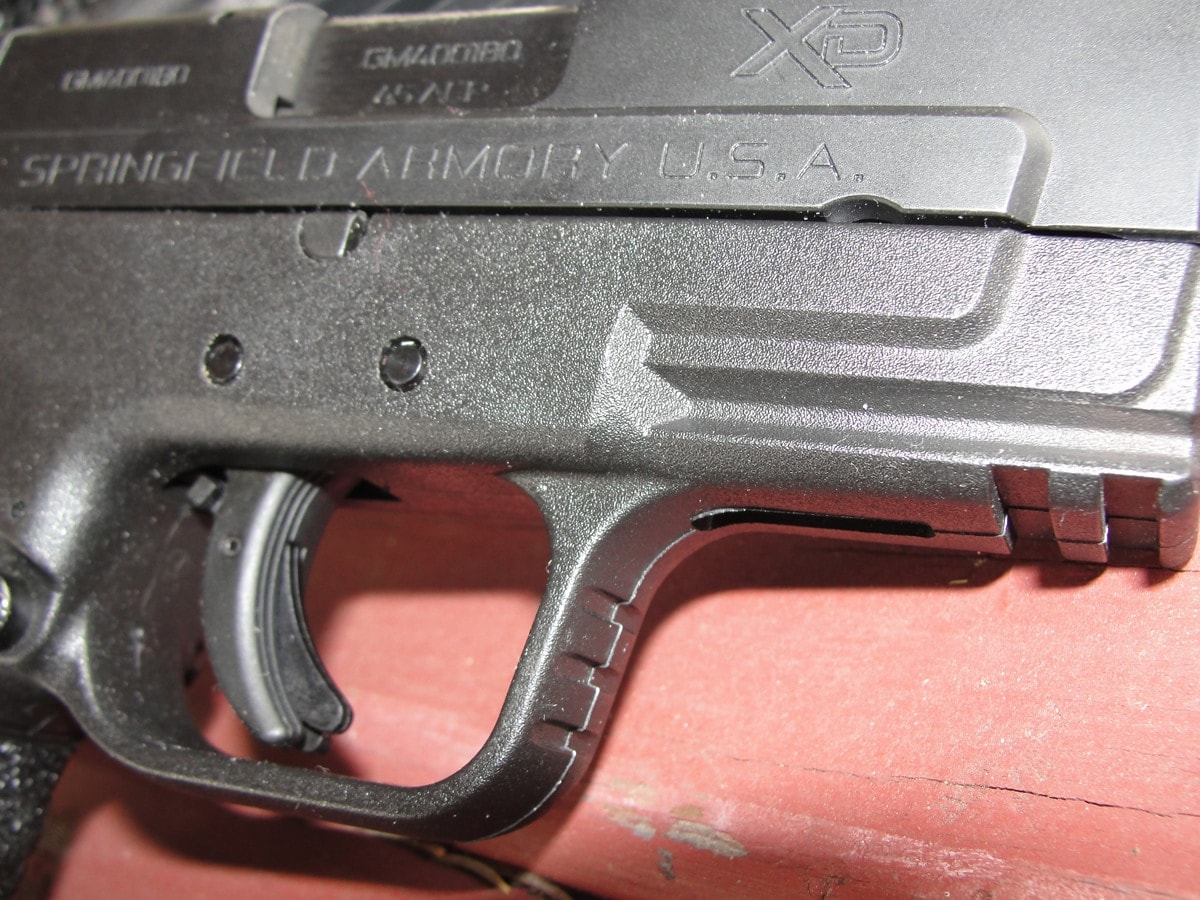 Overall, shooting the gun with the 13 round mag was a totally different experience because the grip fit so much better in my hand. With this magazine in the well, my pinky finger had its own spot to rest on, and it really felt awesome.

I can honestly say that it even felt better in my hand than my old XD does. Obviously, the shorter magazine conceals better than the longer one does, and would be my carry choice, even though it’s not as comfortable. 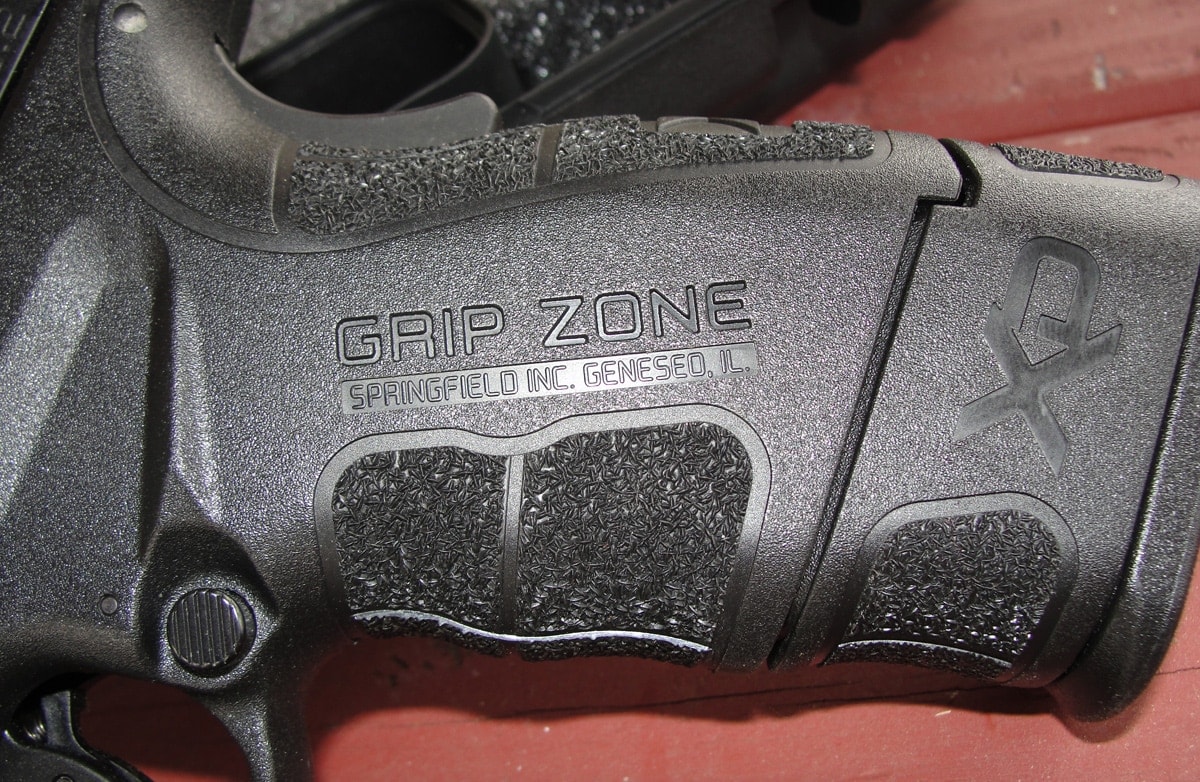 As of right now, if I had to come up with a complaint about the Mod.2, it would be that the wording “grip zone” is totally unnecessary. It seems a little tacky, and whenever I show the weapon to someone, they roll their eyes and say, “as if we needed Springfield to tell us where to grip the gun.”

While I agree with the sentiment, I’m more of a function over aesthetics kind of guy. Plus, I’m not out to win any beauty pageants with it. As far as what I need the gun to do: holster, point, shoot and maim, this thing is right on target. The comfort of this weapon in hand is something that has to be felt to be believed. As the old adage goes, you can’t judge a book by its cover. 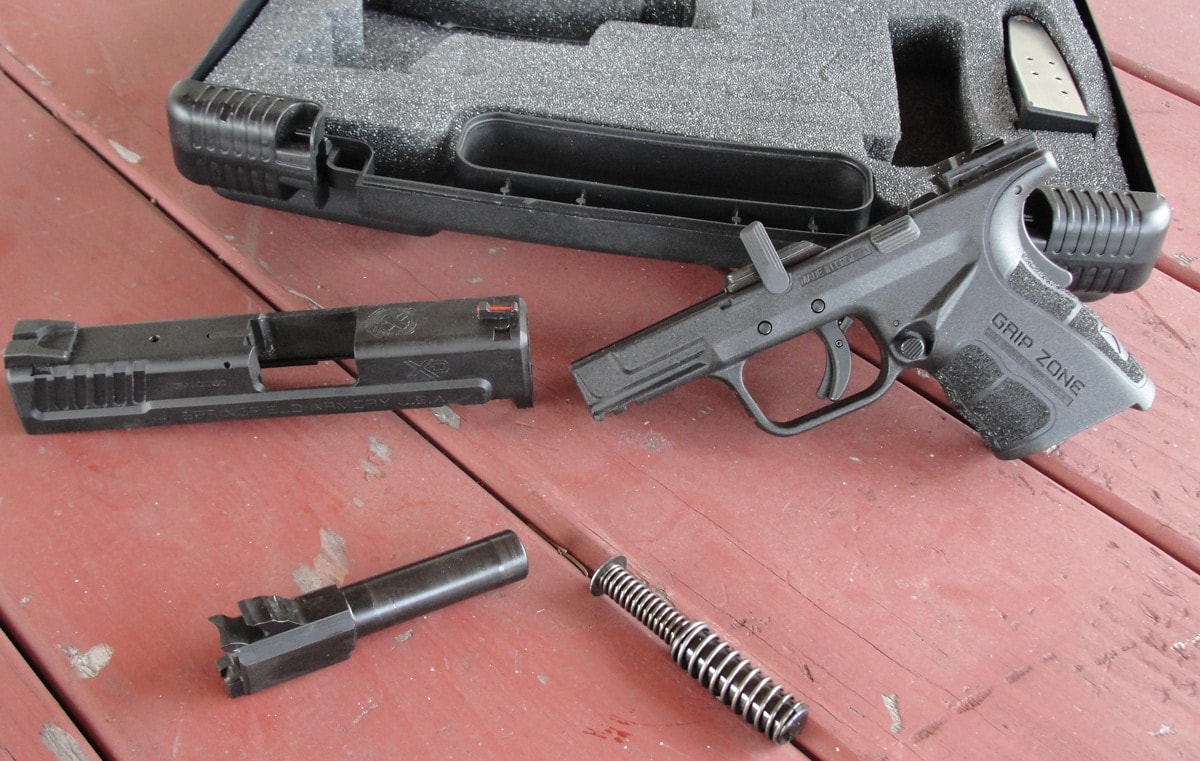 Even though the grip feels great in hand, and stays there due to the redesigned “grip zone,” you wouldn’t necessarily want to bring it to the range and run countless rounds through it.

Because, even though the felt recoil isn’t as strong as other weapons optioned with this caliber and short 3.3-inch barrel size, my hand still tingled after an hour and a half of constant shooting.

The redesigned slide is a bit thinner than the older XD models are, to help aid in concealability. Furthermore, the Mod.2’s slide serrations are also deeper and more pronounced than they used to be. This helps to aide those with weaker hands pull the slide back to load the weapon by giving them a little something extra to hold on to. The slide is available with a black or stainless finish, depending on your tastes. And, MSRP is just over, or just under the $600 mark, contingent upon the slide you choose.

The XD Mod.2 allows the shooter to come onto target faster than before, due to an improved pair of sights. The rear sights have a lower profile than the older XD models, to help reduce the possibility of a snag. And, the fiber optic front sight makes for incredibly fast target acquisition. In addition to the red fiber optic sight, they also give an extra yellow one should that be preferred.

The XD Mod.2 has all of the safety features that made the original so popular, such as: the grip safety, trigger safety, striker status indicator and loaded chamber indicator. All of these safety features continue to keep the XD and the Mod.2 some of the safest striker fired weapons on the market.

The redesigned ambidextrous polymer frame allows the shooter’s hand to sit higher on the weapon, reducing the overall amount of felt recoil. Though, it would be nice to see an ambidextrous slide release on the next version of the XD.

Springfield’s new and improved concealed carry gun that is just 4.75-inches tall (with the short magazine) is out and demands attention. Even if you don’t like the “grip zone” lettering on the side of the grip, you really can’t count it out. So far, it is a solid performer. After 150 rounds, there was not one failure to feed or extract, and the weapon fired flawlessly each time. Will I be buying, one? Yes, I will.