Silencers are one of those bucket-list items that few people actually pick up. Which is a shame, since most of the reasons that keep would-be buyers from taking the plunge, are either blown out of proportion, or totally incorrect. Personally, I was on the fence as to whether the amount of effort, money and time was worth it.

So I asked SilencerCo to convince me by bringing out their Conquest Kit to sunny South Carolina for a weekend.

Surprisingly, they agreed. After a few phone calls they sent one of their product experts and public relations man, Darren Jones, out to bum-fudge nowhere, a few miles from where I live. When he and I exited our vehicles at a friend’s farm to test the SilencerCo cans, Jones produced a Pelican case filled with sound suppressors. To my wallet, it was like that scene from Raiders of the Lost Ark, where the Nazi’s open the Ark, and their faces melt.

Only instead of faces being liquified, it was my bank account. Not necessarily because the cans themselves are expensive, but because I want to buy all of them. 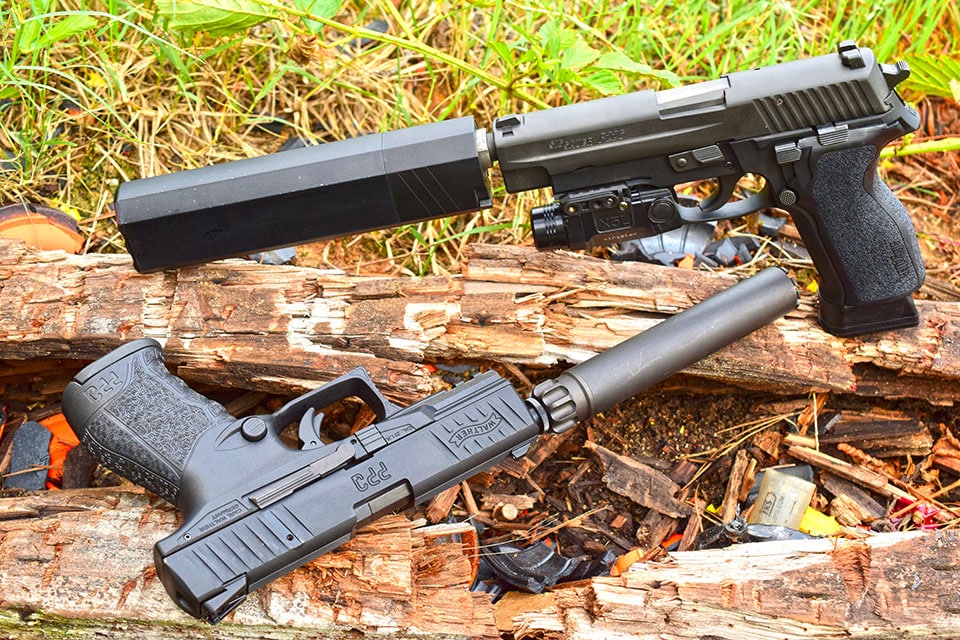 As a long-time pistoleer, I had to get my grubby mitts on a pistol suppressor first, so Jones attached a Spectre 22 to the end of my Walther PPQ M2 .22 LR handgun. The can added an almost undetectable amount of weight to the muzzle, and the report was, technically speaking, stupid quiet. This was one of the few times I’ve had the pleasure of firing a gun without my ear protection, and it felt wrong, but so very right. In fact, one of the strangest things about shooting with a sound suppressor, is hearing things you normally can’t. Like ricochets and bullet impacts.

That quintessential ricochet noise frequently heard in old war movies and spaghetti westerns is 100 percent accurate, so I guess sometimes Hollywood does get it right.

After enjoying some ultra-quiet trigger time with the PPQ, I moved up to the SIG 522 rifle in .22 LR, equipped with the can that started it all — the Sparrow 22. If you thought blowing through boxes of nearly-recoilless .22 LR from a 30-round magazine was fun with ears on, wait until you try it with a can. The gunshot is nearly inaudible in the dense woods of South Carolina past 50 yards, making it an ideal setup for taking out pesky squirrels, opossums and raccoons. 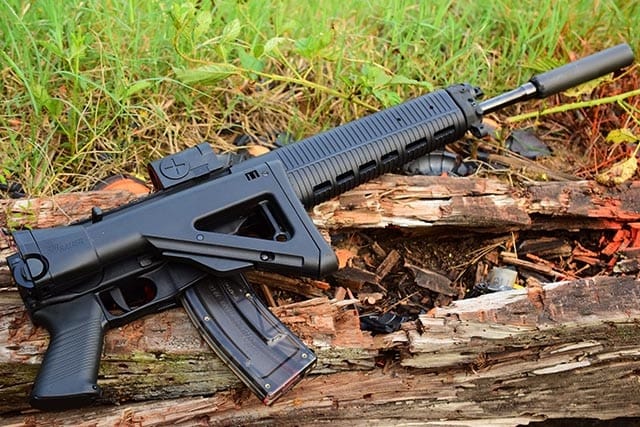 Shooting .22 LRs is fun, but I was ready to get my Jack Bauer on, with some tactical weapons and bad-ass sound suppressors. Naturally, I had to go with the choice weapon of the U.S. Navy SEALs, the SIG P226.

I installed SilencerCo’s Osprey 9 onto the P226’s threaded barrel, grabbed a few boxes of heavy-grain 9mm ammo and hero-walked back up the line. I Felt like a total hard-ass as I chambered my first round and decocked the SIG for good measure, before I rested my irons on top of my steel silhouette target some 25 yards away. Taking a deep breath, I slowly squeeze the P226’s long trigger, until something surprising happens: I hear a noise — a loud one.

It’s not a gunshot,  but the sound of a 124 gr copper-jacketed lead round slamming into a 550 steel target at 1200 feet per second. It feels like opposite day as the church-bell sound of jacketed lead striking steel drowns out the muffled report of the suppressed Swiss pistol.

By this point I’m nearly frothing at the mouth, whatever reservations I still had to refrain from silencer ownership were quickly vanishing with every enjoyably quiet pull of the trigger.

Mind you, suppressed full-powered pistol cartridges from a short barrel aren’t movie-quiet, more like distant gunfire without the supersonic crack. Anyone who thinks these things would hide an assassin in a crowd, fails to grasp how loud the business end of a suppressed pistol really is. I mean, if someone slammed a screen door next to my ear out of nowhere, I might not know exactly who did it, but I’d have a pretty good idea.

Having satiated my pistol shooting itch for the day, I moved on to the big guns. First mounting a Saker 7.62 on my Bravo Company Machine  20-inch pseudo-retro AR15, because it looks cool as hell. I found that the combination of full-length barrel, and quality sound suppressor made for a very pleasant shooting experience. 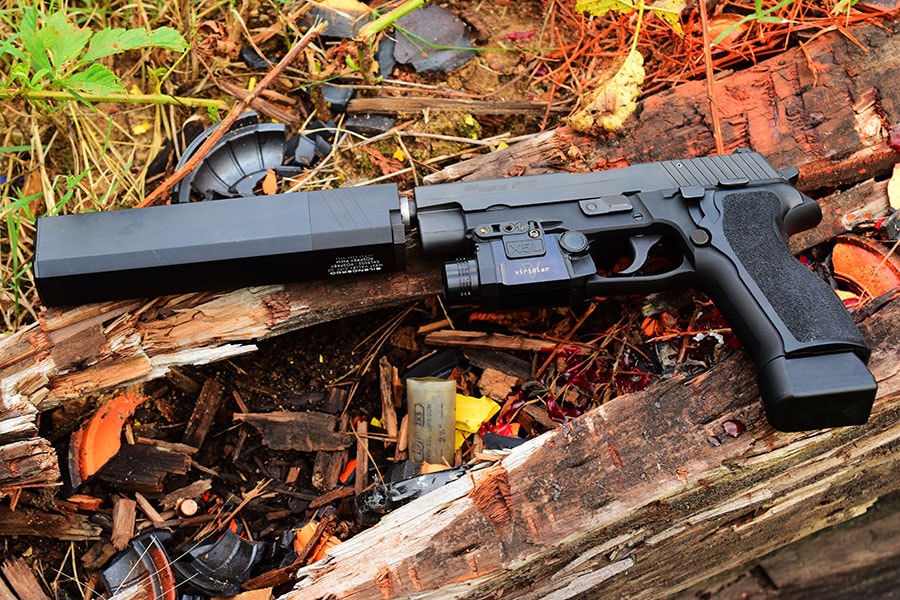 Wanting to try a caliber designed for suppressor use, I got my hands on the Noveske N4 in .300 Blackout that SilencerCo brought out with the Saker. It was extraordinarily quiet for a rifle, not much louder than a suppressed 9mm pistol, which I found to be completely amazing.

I tried to reason with myself, “Yeah it’s quiet with that specialty caliber, but what about battle-rifle calibers like .308?” Without missing a beat, Jones instructed me to mount the can on my Ruger Scout in .308 while he prepared the .300 Winchester Magnum. I checked to make sure he wasn’t screwing with me, and asked him to repeat that gun’s caliber one more time.

When he confirmed it’s the big bad Win Mag, a smile sneaked across my lips as I thought to myself, “Now we’ll see what these silencers can really do.” 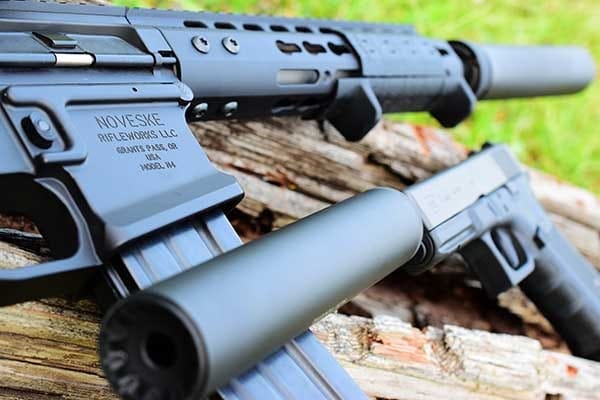 Pictured: two things that made me happy and my wallet sad. (Photo: Jim Grant)

While Jones prepared the world’s quietest anti-dinosaur rifle, I fired off rounds from Ruger’s Scout. As I picked off distant clay pigeons strewn about the 150-yard bern,I noticed a strange, almost melodic noise emanating from above my head. I placed the rifle on safe before glancing up. “Birds!?” I proclaimed, somewhat disappointed.

I thought aloud, “Stupid animals, I’m firing a gun, doesn’t that hurt their ears?” At that point the hunting application of the Saker really hit me. I was able to plink with a.308 caliber rifle from an ear-splitting 18 inch barrel, without disturbing the wildlife. Incredible.

After a few dozen rounds of .308 had found their mark, I finally got my hands on a Weatherby .300 Win Mag with SilencerCo’s new Harvester suppressor. The Harvester features a muzzle brake integrated into its design. For large calibers like .300 Winchester Magnum, this is a God-send.

The last can I had a chance to run, is the Salvo 12, SilencerCo’s shotgun suppressor. It is a truly amazing experience, being able to shoot clay pigeons with multiple shooters, while simultaneously holding a conversation is unreal. Two areas where this can will excel are as a home defense shotgun and hunting gun accessory.

Imagine knowing that if you have to fire your shotgun indoors, it won’t result in permanent hearing damage for you, your wife kids or the family dog. In hunting blinds early in the morning, sometimes shooting companions forget to put their plugs in before shooting that perfect mallard. With a Salvo 12 it won’t matter so long as you don’t get the muzzle too close to them.

After trying out all the various sound suppressor models that SilencerCo offers, I know I must own one. I implore any shooter on the fence about buying their first can either ask a friend with one to give you get some trigger time or visit a range that rents them. I’ll warn you though, once you’ve fired a gun with a suppressor, you’ll never want to go back.