Aside from price, comparing the Judge and the Governor is something like comparing Coke and Pepsi. Taurus reached the market first with their .45 Colt/.410 combination as Smith & Wesson had to play catch-up.

Both companies offer really good warranties and both of these odd revolvers perform basically the same way (Governor and Judge).

While I’m not convinced either of these revolvers are ideal self-defense weapons, I do think both of them make excellent snake guns. So what makes them different?

The Cylinders – While the standard Judge is a five-shot, the Governor holds six cartridges making it infinitesimally larger. (However, Raging Judge Magnum holds six).

The Ammunition – If the Governor has a leg up on the Judge, it is because the Governor is capable of using a third cartridge – .45 ACP. While you do have to use moon-clips to hold the round in place, you can mix .45 ACP, .45 Colt, and 2.5” .410 shot shells all in the same six shot cylinder.

The practical side of this is insignificant. The .45 Colt has a bit more kick, but there are fewer options for bullet shapes. Whereas .45 ACP is available in a multitude of designs and it’s offered by variety of manufacturers.

The Sights – The Governor comes with Tritium Night Sights and they work so very well. The Judge has a fiber optic front sight, which isn’t bad either, but doesn’t glow in the dark. However, both companies are offering laser grips for a slight price increase. 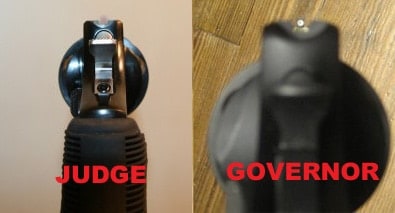 This is a really subjective topic. With a fiber optic front sight, it’s incredibly easy to gain and regain sight alignment especially against the flat black silhouette on a paper target. Not only that, with minimal light it can still be seen. Night sights are really intended for little to no light, so it becomes a matter of place more than purpose.

The Grips – While I don’t mind the soft touch provided by the Judge’s grip ridges, I much prefer the finger grooves on the Governor. I can hold on to the Smith & Wesson more easily.

While Taurus’s ribber grips provide cushion and comfort, the ergonomic finger grooves assist me in attaining a hold I am comfortable with.

In the end, this is going to come down to brand loyalty for most folks. You may consider your perceptions of the two companies. While I like Smith & Wesson, I’m dubious of the Governor’s name. It seems like a blatant attempt to both piggyback on and one-up the Judge.

But maybe that’s it. The Governor one-ups the Judge: one more round in the cylinder and one more choice for ammunition, but one hundred more dollars.

Both Judge and the Governor are mean guns, but Taurus offers many different permutations of the model. You can choose a snub nose or a 6.5” barrel, and many lengths in between. There are polymer frames, and alloy, titanium or steel framed Judge variations.

Short grips. Full sized grips. Two tone. Stainless. Black. Taurus even offers the Judge Magnum that will shoot 3.00” shot shells. The result is an even uglier gun that is just a bit meaner. Even if you don’t buy into the best-self-defense-gun-ever hype, I’d recommend taking either for a test drive.