Gear Review: Be prepared to save lives with a medical “holster” 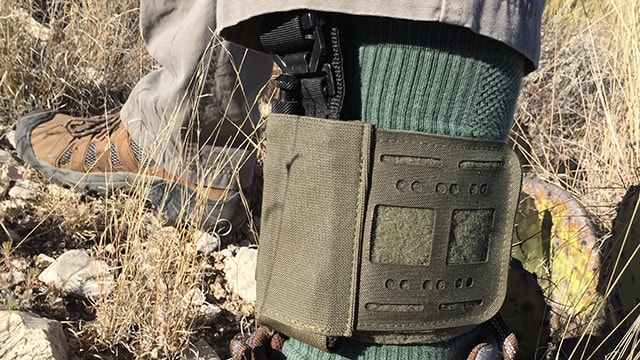 The SFD Responder is comfortable over a sock, a boot, or on bare skin. (Photo: Eve Flanigan)

One very important—and priceless—lesson Americans have learned as a result of sending troops into combat during the last two decades is how to prevent loss of life secondary to bleeding. Tactical Combat Casualty Care, or TCCC, has saved thousands of lives overseas.

TCCC methods, chief among them being tourniquet use, are widely taught to US law enforcement personnel. Many former military personnel now serve in a new uniform stateside, making TCCC skills even more commonplace among police. The results are evident, with life-saving stories becoming commonplace on both sides of the badge, whether it’s an officer saving his or her own life using a tourniquet, or enabling a subject to appear on a court docket rather than an obituary after a necessary shoot.

Now, TCCC skills are percolating into the civilian sector. While it’s easy for most law enforcement or military personal to strap a “blowout kit” onto a MOLLE-equipped vest, the rest of us have to find a way to be prepared.

The concealed carrying public is already adept at concealing firearms. Additional life-saving items make sense to carry as well. Whether a gun-carrying civilian or some other person is severely injured during a crime, stopping blood loss can save a life as or more effectively than the gun. Perhaps trumping the effectiveness of a firearm, the concealed tourniquet (and perhaps a chest seal, fabric cutter, or other gear) can also save lives during non-criminal emergencies that are commonplace in professions like farming, construction, and even during home maintenance tasks like mowing and chainsaw operation. Even people who would never consider carrying a gun, can learn and perform life-saving feats, equipped with a few simple skills and simple tools.

I’ve been carrying a tourniquet in my vehicle and while on the range for a few years. There are some new products on the market that offer options for accessible, and in some cases discreet carry of medical supplies. I recently had the chance to test a couple, and to interview a couple folks who use another. Here are those products, with my thoughts on the advantages and limitations of each. 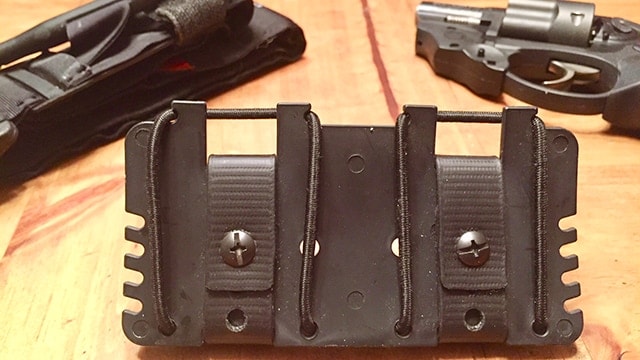 1. Flatpack Tourniquet Carrier
The Flatpack Tourniquet Carrier came my way courtesy of Lucky Gunner, a favorite ammo vendor. When I first unpackaged it, it took some time, turning the 5.0 inches long, 2.5 inches high flexible plastic panel with its notches and shock cord in my hand, to figure out how it worked. But it’s a very simple device in practice. For street wear, just thread a belt through the very flexible (biothane, maybe?) loops on the back. The shock serves as a quick-release attachment for a SOF or CAT type tourniquet. Just like carrying OWB, the tourniquet is “right there,” ready to go.

I’ve found this holster perfect for range carry. Worn between the 3:30 and 5:30 points of a duty belt, which threads easily into the device, it keeps the most important component of my emergency gear within easy reach. Releasing the tourniquet is an easy, albeit fine motor motion of pulling shock cord out of its notched moorings, twice. 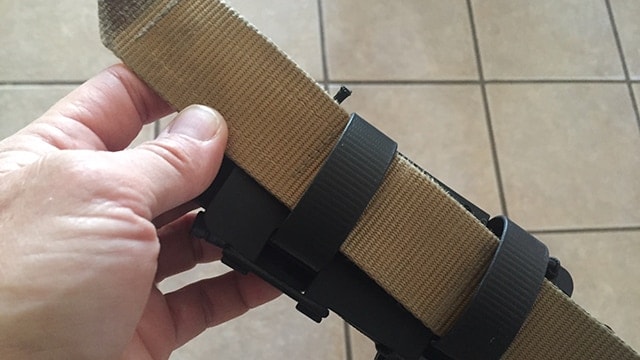 Strapping my belt into the Flatpack for the day’s range work. (Photo: Eve Flanigan)

For professional operators, the Flatpack can be attached to gear using short MALICE clips, Blade-Tech’s MOLLE clips, or remove two plastic, Allen-head screws, and weave the included straps right into MOLLE. Whether worn on a belt or vest, faster access to a tourniquet is hard to imagine. The Flatpack weighs next to nothing but gives inestimable value of quick access to the fix for arterial blood loss. This little device has become a favorite, and comforting, range companion. It’d be equally valuable for hunting. The shock cord isn’t quite long enough to stretch around a battle belt, but it’s flexible enough to fit the duty belt underneath. Worn between 3:00 and 9:00 and carrying a CAT, it does make a bulge that makes it less than ideal for extended periods behind the wheel.

For anyone, this device makes a tourniquet more accessible than pretty much any other method of carry. For me, it makes carrying a quality tourniquet easy and doable—before the Flatpack, I carried only a SWAT, the rubber-strap tourniquet, a less preferable tool. I am pleased to use and recommend the Flatpack, made by Phlster, in Philadelphia. Buyers get a two-year warranty along with the Flatpack for $24.95. Accessories like MALICE clips are available with order. 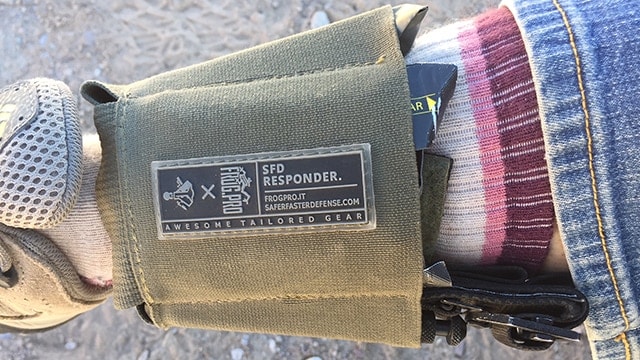 Stuffed with a CAT, chest seal, QuikClot, compression bandage, and a blade, the SFD Responder has room for more. (Photo: Eve Flanigan)

2. SFD Responder
This ankle wrap is made by Frog.Pro of Italy. The sole American distributor is Safer Faster Defense of California. Its several elasticized pockets are capable of carrying a full blowout kit, including one or more tourniquets, chest seals, clotting gauze, compression bandages, a pen light, blade, or other preferred items.
Construction of the SFD is high-tech. The outer closure is made from Lahyco, a tradedmarked fabric that combines 500 denier Cordura and Hypalon, laser cut into a PALS/MOLLE setup that allows for attaching even more stuff. It’s four inches top to bottom.

Against the wearer is a breathable air mesh fabric. It’s soft and pliable enough to be worn directly against the skin. The elasticized fabric between the ankle and pouches is doubled for strength. In yet another nod to comfort, the hook and loop fabric used on the SFD Responder’s attachments is thinner, but still gives solid purchase. There’s no chance of Velcro hook rash with this holster. 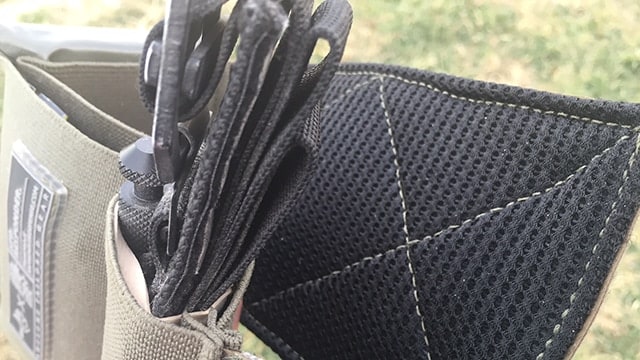 A look at the breathable liner of the SFD Responder. The Combat Application Tourniquet rises above the top, but remains comfortable and discreet. (Photo: Eve Flanigan)

I first became aware of the SFD Responder during a pre-class safety briefing by Rob Pincus on the 2017 Personal Defense Network national tour. He touted its all-day wearability. When I finally got a copy, I was not disappointed. This thing easily packs a CAT, which is taller than the pouch, comfortably. The bottoms of the pouches are also elastic and hug contents tightly, and thus pushed smaller packages (like a standard military compression bandage) all the way to the bottom. Nothing has budged nor threatened to come out. It fits comfortably over athletic shoes or boots, and doesn’t bulge under standard boot cut jeans.

The SFD Responder comes in black, ranger green, coyote tan, and multicam. The price, including US shipping, is $65.45. Delivery times are slow, very slow, think four to six weeks, though the purchase is charged upon order. They’re apparently still a small-batch, made-to-order product. Despite the slow shipping, I feel the SFD Responder is the ideal resource for packing emergency equipment in a concealable, convenient package that you can forget is even there until it’s needed. It’s a major confidence booster for EDC.

Conclusion
The technology of saving lives by stopping blood loss through an injured limb is simple and increasingly well-known. In addition to educating civilians and law enforcement on these techniques, a worthy challenge in the daily carry industry is making it possible to carry emergency gear in a way that’s presentable on the street. The Flatpack and SFD Responder are both superb tools, capable of both law enforcement Class A/B and civilian wear.