The TP9SA is the best budget gun ever made (VIDEO)

Three witches huddle over a boiling cauldron, mirroring the famed scene from Hamlet. They drop a SIG P250 a Walther P99 the trigger from an HK VP9 and a few pinched pennies. Cackling as their story their pot with a railed over-sized aluminum soup spoon. A few choice words in backwards latin are chanted before the concoction erupts, filling the dank night air with thick, foul-smelling fog.

The hags reach in, pulling a 9mm Canik TP9SA from the murky mire.

Why the hocus pocus talk? Because black magic is the only way to explain how a pistol this great costs so little jack. Plus, it’s a great metaphor for the borrowed design elements the TP9SA takes from various popular handguns. 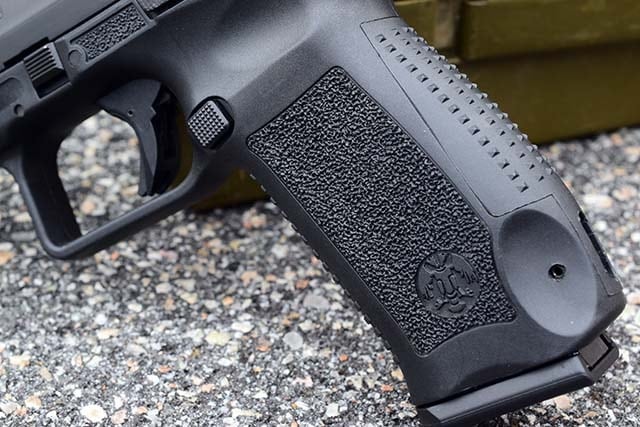 The Canik TP9SA is a polymer-framed, locked-breech semi-automatic single action only pistol chambered in 9mm. It feeds from an 18-round steel-bodied double column magazine made by Mec Gar. It features a Walther-esque grip design that does away with both the HK-style mag release and the odd raised bump grips for aggressively stippled ones. The only external safeties are a push-button decocker and a Glock-style, bladed safety trigger.

Unlike most polymer handguns, the TP9SA isn’t striker fired, or double action. It’s a single-action only pistol with a decocking button atop the slide. The trigger pull is crisp, clean and amazingly light for a stock combat handgun. Additionally, the TP9SA features a railed dust-cover for mounting accessories and an extended, reversible magazine release for faster reloads. 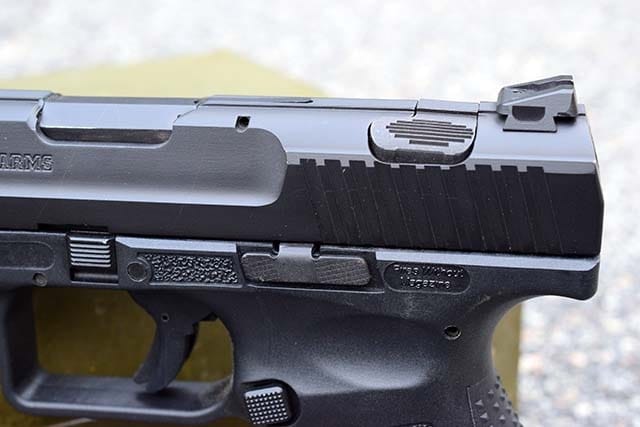 Despite being single action only, the TP9SA features a decocker. (Photo: Jim Grant)

One area where the TP9SA sets itself apart from all the aforementioned pistols, is its grip design. Most double-stack polymer-framed guns have wide-bodied grips that are difficult for smaller shooters to comfortably hold. The TP9SA has a very thin grip especially for a handgun that holds 18+1 rounds of 9mm. If you’re a bear-clawed shooter who needs bigger grips, it includes multiple interchangeable backstraps. If you’re still not impressed, keep in mind it also ships with two magazines, a Serpa-type holster and mag loader.

The TP9SA doesn’t just have an exhaustive list of desirable features, it also performs like a world-class combat weapon. In testing, the TP9SA encountered no malfunctions across 500 rounds of ammunition. This includes +P defensive ammo from Hornady and SIG Sauer as well as plinking ammo from Blazer, Wolf and Tula. Accuracy aside, the two most pleasant rounds to fire are Tula’s 115 grain steel-cased FMJ and HPR Black Ops 85 grain open-tip frangible ammo.

Accuracy is great with the TP9SA grouping an average of 1.5 inches at 20 yards. With HPR Black Ops 9mm grouping under an inch and Blazer Brass grouping three inches . Either of these are more than acceptable for a combat handgun. These was aided by the three dot iron sights the rear one of which is adjustable for windage. 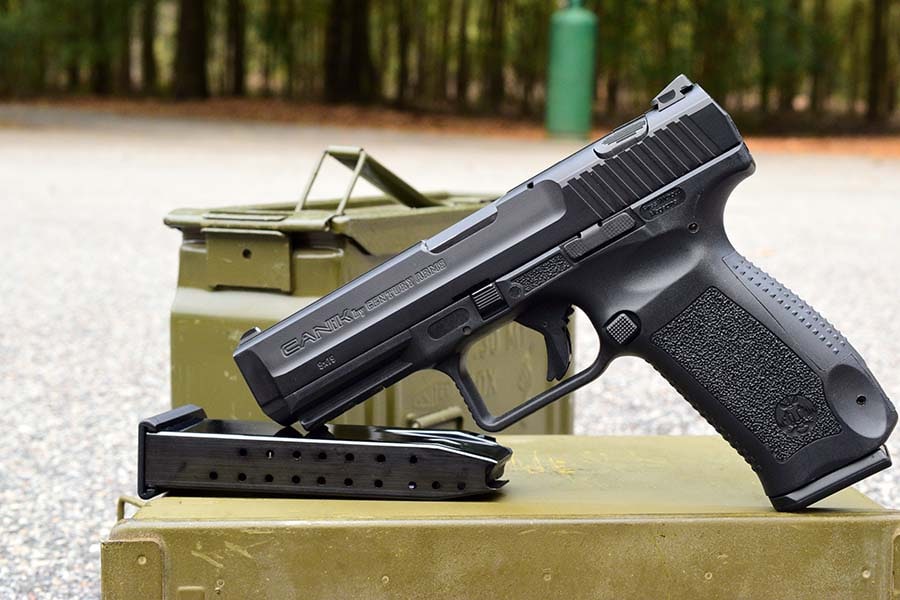 The Canik TP9SA shown with its 18-round magazine. (Photo: Jim Grant)

The ergonomics of the TP9 are excellent for a polymer handgun. Though the stippled grips are a aggressive, aiding shooter’s pistol retention when wet or oily. Even though the stippled surfaces are rough, the weapon is comfortable to shoot even for shooters like myself who white-knuckle their pistols. Good news for small-handed shooters, the grips have a small channel above the magazine release that reduces the distance from the backstrap to the trigger. This channel is on both sides of the pistol and doubles as a thumb rest. 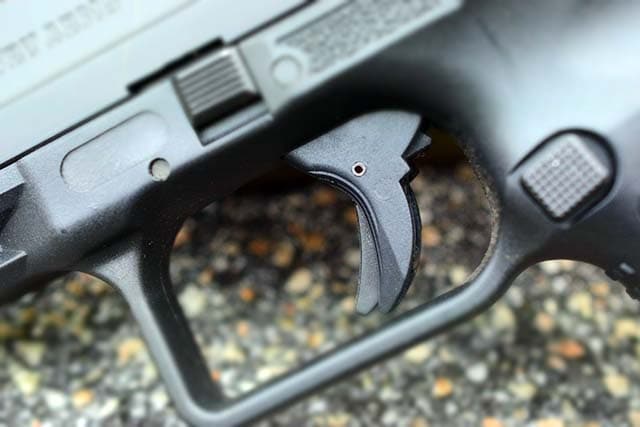 Invariably, any new polymer handgun is compared with the king of plastic pistols, Glock. While a more indepth comparison will surface in a future article, it’s important to note that the Turkish Canik and Austrian Glock are more different than they are alike. Sure, they’re both polymer-framed semi-automatic pistols, but firearms are a mature technology. Excluding oddball weapons like the Gyrojet pistol, all share certain design elements. To this length, the TP9SA is as different from Glock’s pistols as the M1911 is from SIG’s P320.

The TP9SA’s features read like a checklist for a dependable combat pistol with a few creature-comfort options thrown in for good measure. While impressive on its own, the TP9SA is Earth-shattering with it’s low $369 MSRP. Given its low price, remarkable reliability and unique appearance, I might not be long before a larger company buys up the rights to the gun, rebrands it and sells it at a premium.

Think I’m crazy? That’s exactly what Springfield did with the Croatian HS2000 that’s better known as the XD in the United States. Not that I blame them, the XD is a great design that Croatia failed to properly market. If you’re looking for a solid combat handgun in a service cartridge for home defense or concealed carry, buy a TP9SA before it becomes a Colt & Wesson Z18 for $800.