Traditions Mountain Rifle: A factory muzzleloader with a custom feel 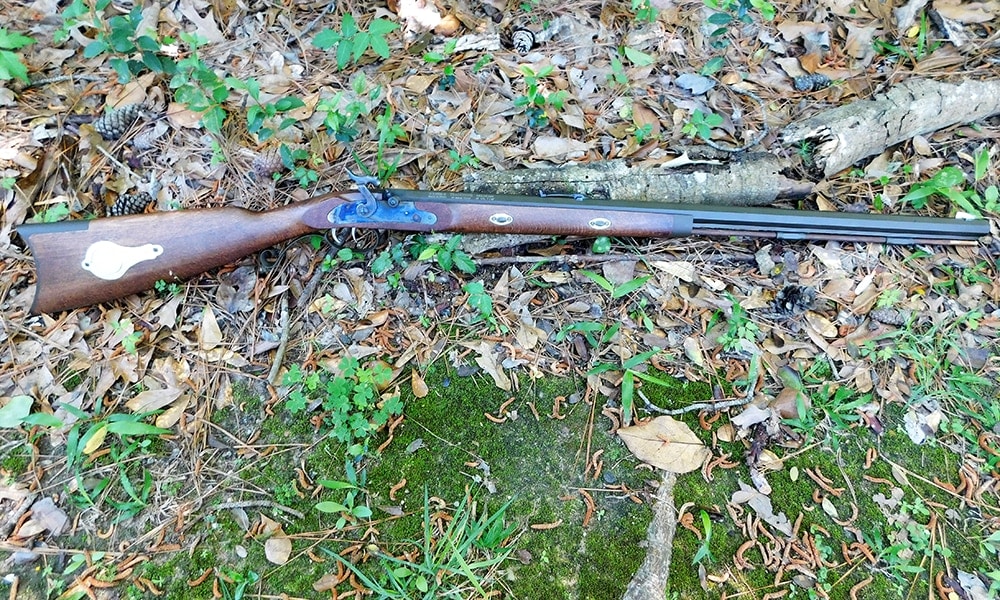 Factory-made traditional muzzleloading rifles fail to impress at times. The rifles available today are less expensive than they have ever been. Their accuracy and reliability when loaded properly should give a modern rifle shooter reason to pause. Unfortunately, these rifles tend to be very generically shaped, resulting in a poor pointing piece and premium period-correct hardware is often lacking in exchange for more cost-effective alternatives. I’m used to a good custom long gun, but every once in a while, there is an off the shelf option that makes me sit up. The Mountain Rifle—by Traditions—is one of those.

Feature-wise, the Mountain Rifle resembles many plains-style rifles that ventured into the Old West before the famous Winchester rifle could tame it. It features a walnut half-stock and a heavy 32-inch octagonal barrel with an underrib that meets the stock and serves to mate the ramrod pipes to the gun. The barrel, triggerguard, buttplate, sideplate, and nosecap are of an all-steel construction and finished with a brown cerakote. Serving in contrast is a part that you can’t do without, a brass patchbox in the buttstock. The rifle’s sights consist of a rear adjustable notch and a brass blade front.

Though the Mountain Rifle is available in both flintlock or percussion ignition, it’s the same double-set trigger system and a 1:48 inch twist rate in the 50 caliber barrel. 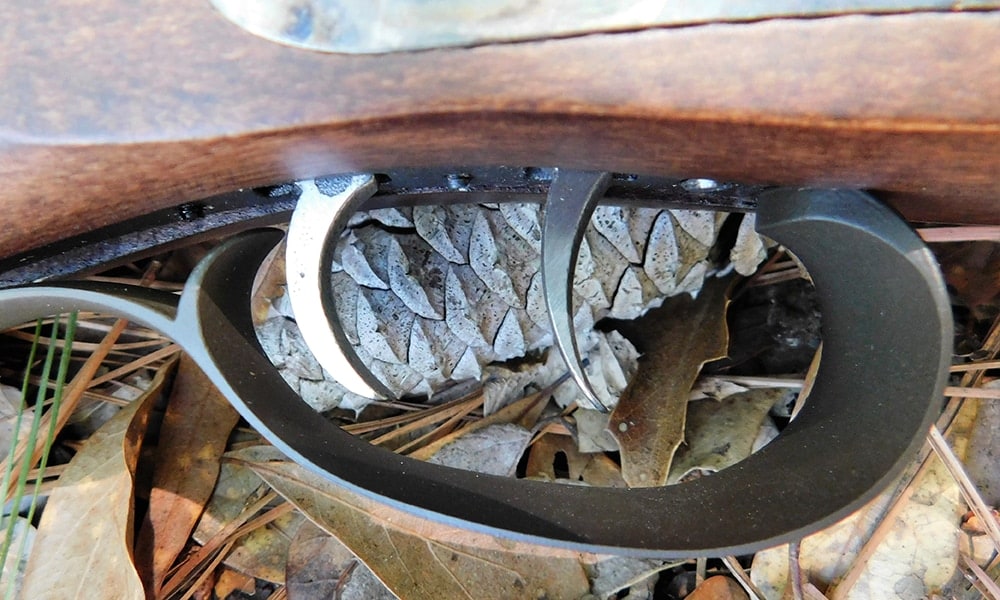 The double set trigger is my favorite feature on this rifle and a must have on those thousand dollar customs. The rear trigger is used to take up the travel of the front trigger, allowing the front hair to go off with just a touch. You can pull the hair on its own with a more conventional trigger weight without being set, should you choose. (Photo: Terril James Herbert/Guns.com)

Off the shelf, the Mountain Rifle looks a little bit like a true custom. If it wasn’t for the “bible” on a visible barrel flat, I could’ve mistaken it for one of those hand-built rifles. The lines and wood to metal fit are refined and there are even a few extras thrown in that you won’t see on a budget rifle—custom or factory. You could say it’s a compromise between those two worlds and this compromise will land you any North American big game, but compromises often have major downsides.

Loading the rifle requires a bit of preparation. The hammer is pulled to its half-cock safety and the nipple primed with a percussion cap, though it is easier to do with the hammer at full-cock—as is the case with many caplock rifles. Fire a few caps to clear away any residual oil from the nipple and chamber. Now you are ready to load.  Put the butt of the gun on the ground and drop a measured charge of black powder or a substitute down the barrel and then seat the projectile behind it with the wooden ramrod housed under the barrel. With the rifle loaded, you are free to prime and shoot. There are two ways to fire off the rifle. With the hammer at full-cock, you can pull the front trigger right away or you can pull the rear trigger until it clicks. This sets the front trigger for a very light and delicate pull for pin-point shooting.

After a brief 25-yard sight in, I benched the rifle with a trail walk load of fifty grains of FFg Grafs black powder and a .490 inch patched ball. Setting the trigger was easy to do without taking my eyes off the target and just the thought of touching the trigger discharged the gun. I was rewarded with a three-shot group that stood at one inch, but lower than my six-o’clock hold on the bullseye. I dialed up the set screw on the rear sight and amped up the load to seventy, then ninety grains with nearly identical results. The groups ultimately made a three inch pattern at one hundred yards between each of those loads. But round ball tells only part of the story. 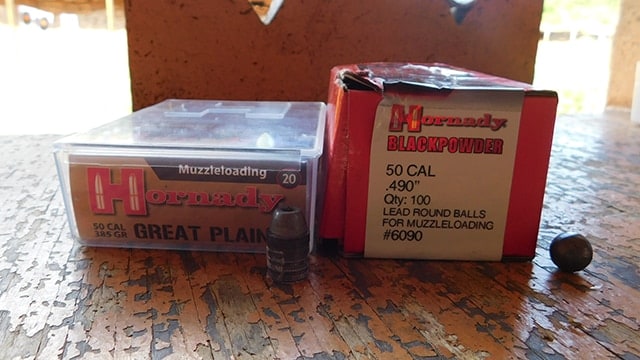 Though I am partial to round ball loadings for traditional muzzleloaders, the Mountain rifle shoots conical rounds like the Hornady Great Plains Bullet very well. (Photo: Terril James Herbert/Guns.com)

You can find 50 caliber conical bullets in most outdoor stores and they are worth talking about here as the 1:48 twist should be fast enough to stabilize these longer, more modern bullets. Conicals are easy to find and their length allows for greater energy and velocity retention at distance compared to the lead ball. For my test, I used Hornady’s Great Plains Bullet, which is weighing in at 325 grains. These require no patch when they are rammed down the barrel but with the same loads I got noticeably more recoil. This should come as no surprise because with the round ball we are throwing a lighter 177 grain projectile. At fifty yards, the conical was less accurate than the round ball and it got out of the muzzle with less velocity. I was a bit fearful that the compromise 1:48 twist would shoot neither the ball nor the conical very well, but at one hundred yards the groups turned up even—a rather consistent three inches. With the conicals I didn’t witness any noticeable drop at that distance, unlike the round ball which dropped three to four inches low.

Traditions’ Mountain Rifle certainly checks the boxes when it comes to performance. Accuracy is great once you get on top of the sights whether you are using kid-friendly fifty grain round ball charges or kicking it up to heavier loads. The rifle was very reliable through my testing once I cleared the oil out of the bore and nipple, I had nary a hang fire or misfire.

Cleaning turned out to be a double-edged sword. This plains style rifle is easy to break apart for cleaning, relying on two keys in the stock that need to be pushed out. Once that is done, the barrel is lifted out of the stock. From there, cleaning is easy, but I had to pay careful attention on the range after repeated firing. I found that after the seventh shot, the gun got increasingly difficult to load. This is alleviated by running a damp patch down the bore every now and then to clear out some residue so that you can resume work. Unfortunately, after a string of ten, the gun got so clogged that I broke the wooden ramrod trying to pull a dirty patch out of the barrel. If you play with black powder long enough, this is bound to happen. 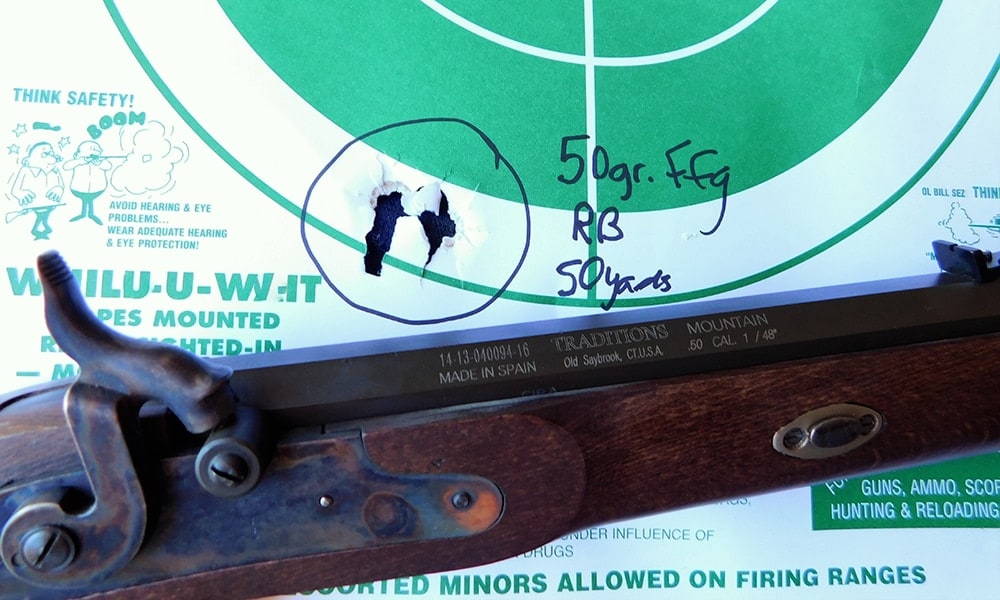 A typical fifty yard group using the hair trigger. These first shots are a little lower than my usual six o’clock hold. You can also see the Traditions logo and other information that blows this rifle’s cover. It is a dead giveaway that this isn’t a custom rifle, but a factory one—a good one, though. (Photo: Terril James Herbert/Guns.com)

Wooden ramrods are the right way to go. They are traditional and economical, but they aren’t unbreakable and require careful, short strokes to use effectively. With a replacement rod from Traditions, I found that swabbing a single patch every four or five shots helped with continuous firing and was not hard on the rod.

The Mountain Rifle went beyond expectations, fit and form is well executed in this package. A medium-sized adult will find the weight and length of pull on the buttstock to be good and the cheek rest natural. I like the inclusion of a double-set trigger in a gun of this price range, but I caution you to be careful using that hair trigger during those gloved weather hunts. Accuracy is great both with and without using the hair trigger while firing normal hunting and plinking loads, though you will ultimately have to decide what load is best for you.