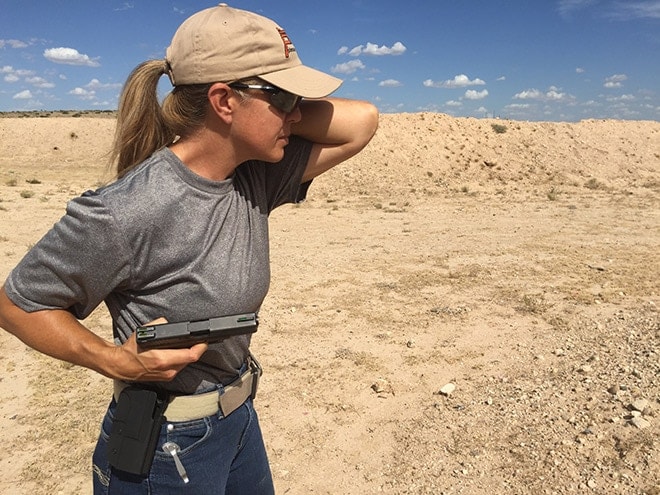 A well-worn statistic says that most interpersonal violence takes place within nine feet or less.  What if the need to use your handgun arises when an attacker is less than arm’s length away? A traditional firing stance would be at best unwise, and at worst impossible. This lesson will demonstrate the retention shooting position, a method of firing your way through an otherwise inescapable assault.

Safety is paramount. If you have been admonished by an instructor regarding keeping your finger off the trigger, please refrain from trying this with a loaded firearm. If your muzzle and finger discipline is not confirmed by practice, do not try this exercise. Guns.com and I bear no responsibility for unintended consequences, e.g. injury and/or death, resulting from inadequate finger or muzzle control or misinterpretation of this exercise.

The purpose of the retention drill is to practice and understand drawing and firing while keeping the gun out of reach of an up-close, violent actor.  You’ll be using your handgun, ammunition, a human-appearing target, and eye/ear protection.

Run this drill at first with an empty gun to be sure you have the steps down and muzzle/finger safety established. Be sure there’s nothing to trip over as you move back. Shooting from retention will be done one-handed — a skill you should already be handy with before trying this.

The support hand should be indexed somewhere rather than just dangling. Conscious placement of the non-shooting hand before the drill begins means you won’t unintentionally shoot through it! 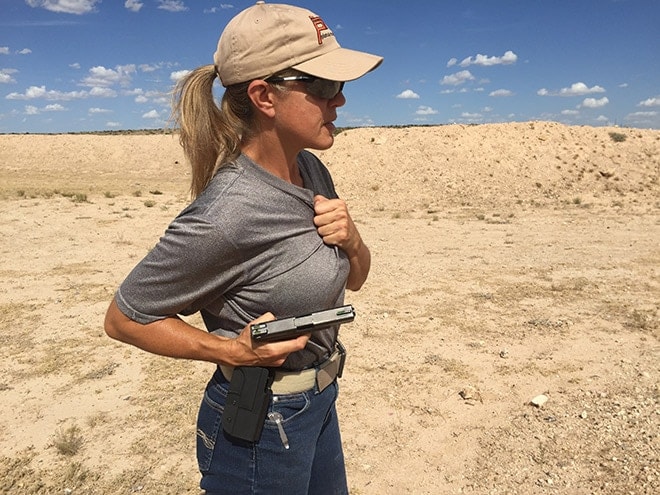 Note how far back my elbow is. (Photo: Eve Flanigan)

One of my mentors advised “grabbing shirt” high on the chest as a good index point for my support hand. It’s become my preferred method.  Not only is it safely out of the way, it enhances balance, is ready to strike if necessary, and offers a bit of protection to vital organs.

Placing the hand inside your waistband, behind your hip, is another method some folks use. It’s my least favorite as it gives up three of the four advantages just cited with the “grab shirt” method.

At Gunsite Academy, we were instructed to place the support hand behind the neck, extending the elbow in the assailant’s direction. Charging into a hard elbow is a sensation few attackers would relish!  Do not use this method if muzzle control is ever in question, as the elbow will be in front of the muzzle plane during firing.

As I advised above, It’s a good idea to run this drill with an unloaded gun the first time.  Even experienced shooters can find this method awkward or intimidating at first. Go slow.

Stage yourself in front of a human-stature target, preferably with a full-size human silhouette or image, so you get an idea of where the shots would land on a real assailant. With the support hand safely out of the way, draw to a retention ready position.  Using a firing grip, finger OFF trigger, push your elbow rearward so the muzzle of your gun is beside or slightly in front of your ribs, aiming forward of course. 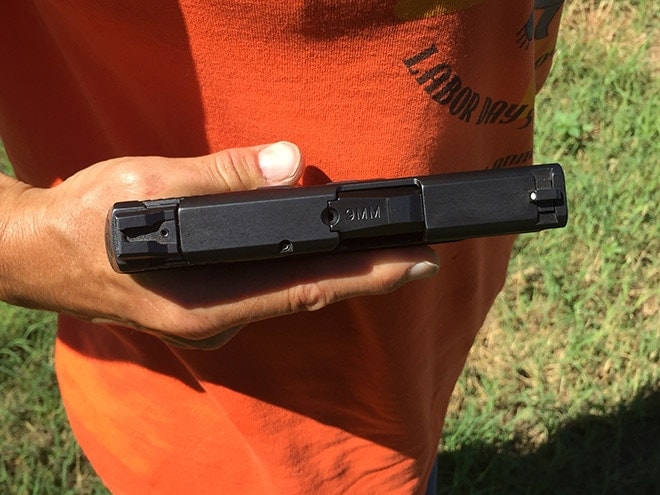 Canting the gun away ensures the slide won’t catch on clothes or flesh. (Photo: Eve Flanigan)

Now, turn your wrist slightly away from your body, tilting the gun outward a bit, so there’s no contact between the gun and clothing.  Stop and look down at the firearm in this position. Picture the slide or cylinder cycling, and be sure that no clothing or flesh will be in the path of moving parts.

Keep the gun in this retention shooting position, and draw a visual line from the muzzle to the target.  Where on the “attacker” will your shot land? Consider the horizontal plane — a shot that goes through his baggy sweatshirt but fails to hit body mass is both ineffective and irresponsible. Move right or left accordingly.  This detail will likely be lost in the rush of a live encounter. But perfect practice is preparation for perfect performance.

Also note in your visual muzzle-to-target line where the shot will land vertically. Most people don’t get the luxury of predicting the height of “their” criminal actor, but a good guideline is to base this on how you measure up in terms of height compared to the average person.

A shot that lands in the pelvic region, where most of mine would go if I were to fire with the barrel horizontal, can be very effective in stopping a threat. But, if you’re preparing for a qualification shoot required for professional licensure, it’s likely your target will have a foul line above that region.  Being shorter than most people, In addition to pushing my elbow back like everyone should during the retention drill, I must also shove mine downward if I’m to ace this aspect of a qualification. That’s another reason I generally shun the support-side elbow-forward method — my muzzle points slightly upward for this drill. Consider your own height and practice accordingly.

Dry firing is recommended before live fire.  When you’re comfortable with drawing to the retention position while your support hand goes to a safe position, it’s time for live fire. 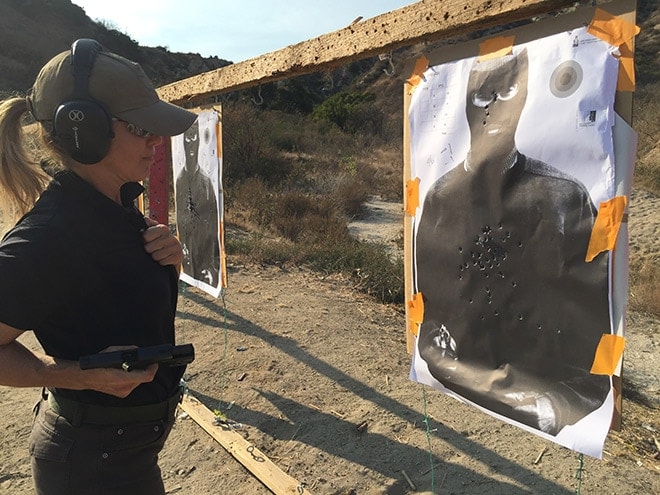 Second shot recoil has moved me back a bit, but my gun and support hand are still in position. (Photo: Eve Flanigan)

Keep your wrist joint rigid as you fire.  It’s critical for safety, accuracy, and for preventing malfunctions in semi-autos.

The most common form of the retention drill uses two rapid shots, followed by a retreat step taken as you establish a two-handed grip, followed quickly by a head shot.  You may want to start with just one retention shot and evaluate before adding the rest.

Ideally, the retreat step is done at an oblique angle away from the target. The headshot should be placed in the small triangular region considered to be an effective handgun-caliber target on a human skull.  Skulls are often effective as handgun bullet deflectors, but that’s a topic for another day.

The oblique backwards step, if it can be done safely both by you and with consideration to the range environment, holds great advantage over a straight-backwards step.  It forces an attacker to re-configure their path, and allows you the benefit of peripheral vision while moving.

What to watch out for

A common error seen in this drill is the shooter placing the gun in front of their belly rather than at their side.  Half the purpose of this exercise is to accomplish shooting without risking having the gun knocked or wrestled away.  Keep it to your side. 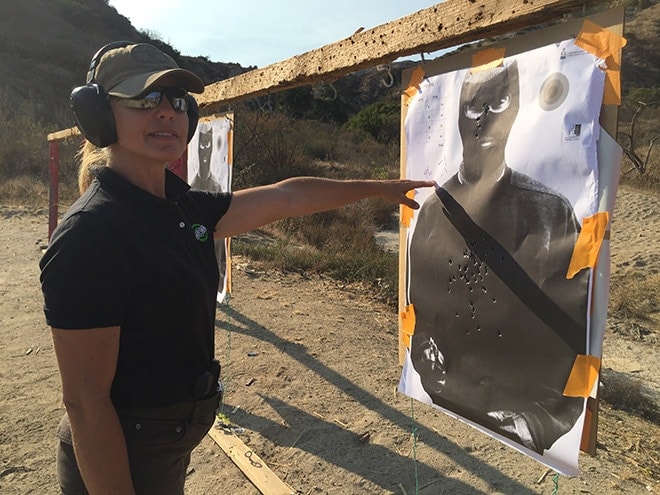 When firing within 36 inches of the target backer, you’ll feel a wave of gas blowback. I think that’s fun!  Don’t be surprised by it, and don’t let it distract you from removing your finger from the trigger, activating the safety or decocker if you have one, and safely reholstering after the drill.

This drill destroys target material in short order. It’s therefore best done at the end of a practice session.