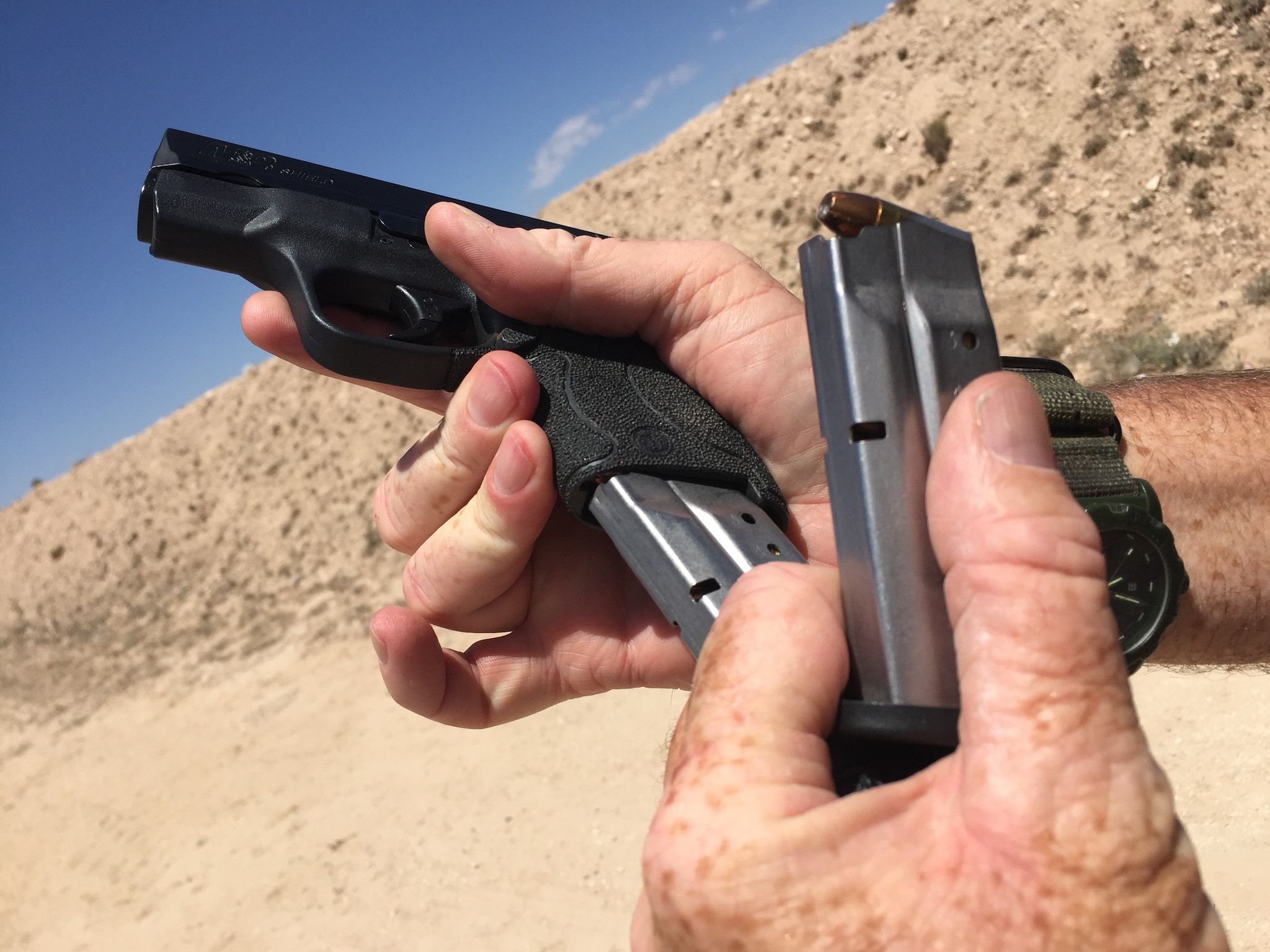 Tactical reloads or Tac loads have come under fire recently from instructors around the globe. Is there reason for this? (Photo: Team HB)

In the past year, a growing number of pistol instructors have been heard railing against the practice of tactical reloads. Always willing to revisit conventional wisdom, I examined their arguments and measured them against my own experience as a shooter, instructor, and range officer.

First, a definition of terms.  Tactical reload refers to the practice of exchanging a partially full magazine, which is in the gun along with a chambered round, for a full magazine.  The partially full mag is placed into the mag pouch, or a pocket.  The firearm can continue to be used, or it can be holstered.

By contrast, the speed or emergency reload is done when the gun has run out of ammunition.  The commonly accepted procedure is to allow the empty magazine to drop from the gun to the ground, while simultaneously inserting a new mag.

With regards to speed reloads, catching and stowing the empty magazine is not a technique taught by respected instructors of defensive or competitive shooting, for good reasons beyond the scope of this article.  Since this is a thing I see most self-taught shooters do, I feel the need to clarify here that it’s not part of the speed reload.

The tactical reload, AKA tac load, has long been taught as a method to ensure the largest possible ammunition supply in the middle of a firefight, when there’s been a break in the action and/or when the actor has the opportunity to spend a moment safely behind cover.

Among the several arguments against the tac load, the most widely repeated one is the dearth of documented cases of it actually being used in a firefight. Therefore, why train it?

Few arguments loom larger than that of real-world application.  It’s a touchstone I use to prioritize my own practice time and choice of continuing education investments. Statistically, the tac load haters are correct: it’s not likely that a shooting will include the luxury of a moment of peace suitable for reloading.

But people who carry a firearm for protection of themselves or the public are also statistically unlikely to have to use a gun.  Countless excellent marksmen in law enforcement have served entire careers without having to fire a shot outside of what’s required to remain certified.  As the saying goes, the gun doesn’t solve most problems. But when it’s needed, it’s the only solution, assuming one has taken victimhood off the options menu. This is doubly true for those who have severe physical frailties.

Statistics can bite you in the butt however they’re used, so let’s move on to other reasons given for not training the tac load.

“It’s slow.” “It’s a fine motor skill.” “People fumble it and drop mags.” “I don’t have a place to put the half-full magazine.”

There’s a reason the speed load is called such. Even with one of those guns that annoyingly requires the operator’s help to finish the job of dumping the empty mag, it’s faster. Of course, I’ll have to fire any number of extra rounds beyond what an exercise calls for to achieve the desired effect of an empty gun, but by gosh, it avoids a tac load.

This is the first symptom of errant thinking.  If your range time is more dependent upon the quantity of rounds fired rather than quality of performance, you’re probably not getting better as a result of range time. If the reasoning sounds more like “I’ll just unload my gun when I’m done shooting, clear the chamber and go home,” that’s great, if what you want is a fairly useless empty firearm.  Hopefully you have a fully loaded gun elsewhere, and close by, if self-protection is your goal.

So, the tac load serves the function of ending training with a loaded firearm that’s ready for unwelcome surprises. Assuming your method of transport or carry, and storage, is safe, this is a valid use of the technique.  It’s far better to top off the gun on the relatively safe practice range than elsewhere, like inside your car or home.

“It’s a fine motor skill.” To some extent, this is true. A speed reload also requires fine motor application.  I agree with choosing gross motor actions over fine when the option exists.  Well-known trainer Travis Haley is fond of scoffing at the all-gross motor skill mentality, arguing that fighter pilots perform a plethora of fine motor actions under extremely stressful conditions.  It’s all in what and how we practice.

“People fumble it and drop mags.” This complaint can be married to the previous one.  People who practice methodically do not fumble the tac load and drop mags, mostly because they use a technique that keeps the magazines secure and avoids dangling the mag from fingertips or between knuckles.  This argument is a reflection of lazy practice and/or ignorance of good technique.

Likewise, finding a place for your not-empty/not full mag is a matter of practice.  From what I can tell, some of the folks complaining about the above have been embarrassed at shooting matches when their planned 30 seconds of glory turned to embarrassment over a fumbled reload. Civilians are not alone in this. Shooters of every background can benefit from the reality check that competition provides regarding performance under stress. That’s true even when the game bears little resemblance to the street.

Enough about what the anti-tac load people say.  Here are some arguments for not adopting willful ignorance of tac loads:

By keeping the foremost of the two sockets of my mag pouch occupied by the fullest magazine, with the second-fullest being in the rear socket, and any empty mags relegated to a pants pocket, I know without having to fiddle or even look down where my next ammunition is coming from.

Exactly one lesson in one of the two accepted tac load techniques, along with a few minutes of practice with an empty gun in the days following that class, helped me commit the procedure to memory.  Today, a couple minutes of dry tac loads about once a month is all I do to maintain competence.

It’s not hard to do. If tac loading alone could cause fumbling, I’d be the first to do it—“klutz” was among my childhood nicknames, one I’ve not completely outgrown.  A little practice has removed all clumsiness from the procedure. If I can do it, virtually anyone can.

Competent gun handling is rewarding, both for practical effect and mastery of the art.  Avoidance of a useful technique because one doesn’t understand it, or worse, because one’s ego is dented by public trial and error, is not something to promote nor be proud of.