Calling All Lefties: Now is the time to get acquainted with the TriStar Viper G2 shotgun (VIDEO)

Is the TriStar Viper G2 a semi-auto steal from the self-proclaimed value experts?  As any gun owner can attest, there can be significant ground between budget and quality. And if you’re in the market for a budget semi-auto shotgun, odds are you expect that gun to be a jack of all trades — that is, a winghunter, clay buster and home defender.  Could the Viper G2 be the gun for you?  All of those questions can be answered as the empties pile up.

A chrome lined chamber and barrel are standard.  The vent rib is nice and wears a fiber-optic front sight. The push-button safety is in the standard location at the rear of the trigger. 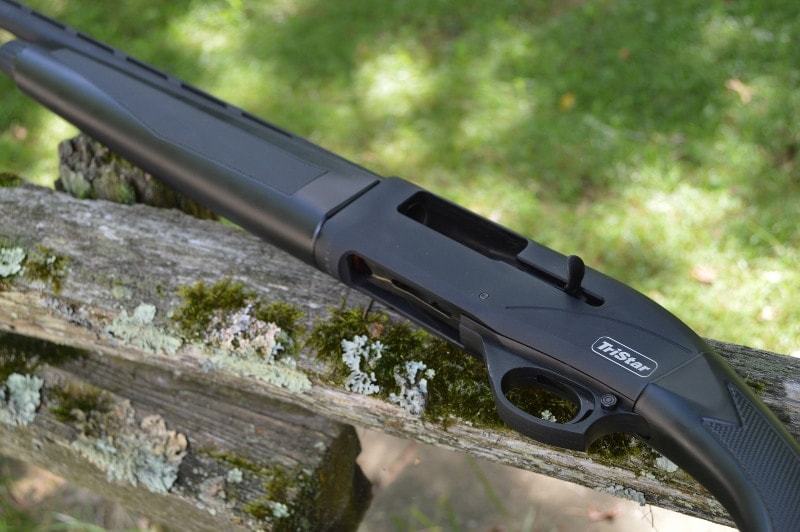 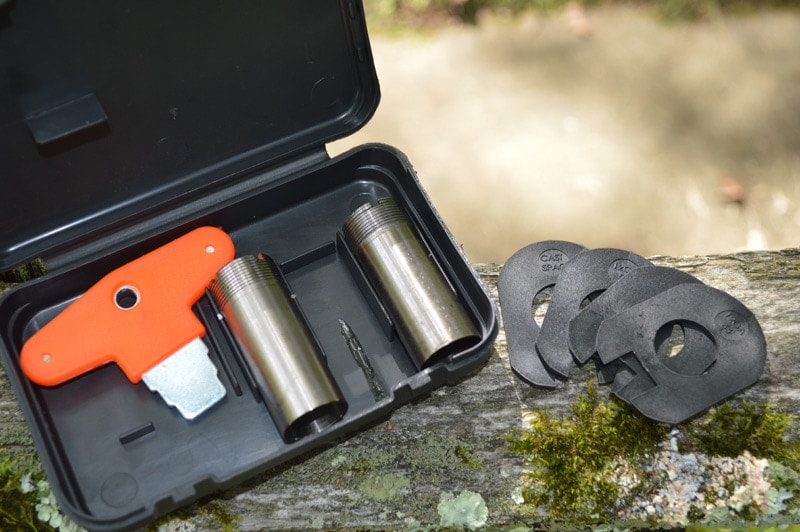 TriStar’s choke tubes are marked only with the European system of notches. The test gun came with a small plastic choke tube box and three flush-mount tubes: improved cylinder, modified and full. (Photo by Kristin Alberts)

TriStar’s choke tubes are marked only with the European system of notches, so you best brush up on the line lingo.  Our test gun came with a small plastic choke tube box and three flush-mount tubes: improved cylinder, modified and full.  I appreciate the fact that TriStar chokes are interchangeable with the Beretta/Benelli system.  Shim kits are also included with all TriStar semi-autos, which will please the longer-armed shooters.

All TriStar sporting arms carry their exclusive five-year, original-owner warranty, which covers function and operation but excludes obvious misuse.  Though the guns are built in Turkey — a country with a long pedigree of gun manufacture — TriStar’s USA hub is Kansas City, Missouri.  Several friends shoot TriStar semi-autos and O/U’s, and while one O/U had to be returned to the factory, the turnaround time was exceptional — just under a week, in fact — and the gun now functions as it should.

When opening the black TriStar box, one can’t help but notice the bright orange sticker announcing instructions to shoot 20 or so magnum rounds through the firearm as a sort of break in period.  We did this with both lead and steel magnums in 2-3/4- and 3-inch shells, and subsequently did not have any problems cycling regular target loads. 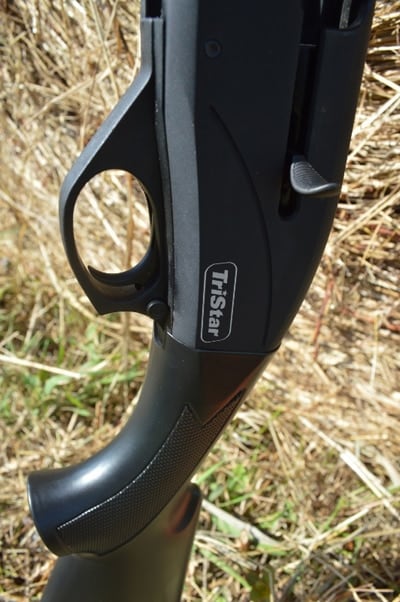 TriStar put a lot of attention into shaping the rear of the trigger guard. Its half-moon curvature fits very comfortably against your hand as the gun is carried. (Photo by Kristin Alberts)

The company’s website acknowledges that new guns come from the factory very tight and need to be loosened up, and they are correct.  The gun is tightly fitted and certainly needs to be disassembled and lubed prior to firing.

Our 3-inch chambered shotgun handled the major 2-3/4-inch light target loads with no problems. I even loaded down to the safe minimum using both Green Dot and Rex II without issue.  However, for reasons unknown, the Viper would not cycle Noble Sport’s Low Recoil rounds.  These were the 1-ounce loads advertised at 1,200 fps and this was the only problem we encountered.  I consider this quite minor because for one, Nobles are not a brand most shooters choose, and secondly, the gun easily cycled both Winchester light target loads and the light 1 ounce handloads.

Aside from the Nobles, we fed the Viper seven other flavors of shells — from reloads to variants of Winchester to Remington to Federal — and it ate them all without complaint, as fast as the shooter can pull the trigger.  We made several trips around the clays course and the gun shoots easily to point-of-aim and swings well with its 28-inch barrel.

The only complaint on clays was the orange fiber optic on orange birds.  This is quite minor and if it’s a genuine issue for shooters, the optic can be swapped out for green.  On the flip side, after spending some time toting the gun around the bird fields, I was pleasantly surprised with the attention TriStar put into shaping the rear of the trigger guard.  Its half-moon curvature fits very comfortably against your hand as the gun is carried.

All of the Viper G2 synthetic models wear a soft-touch finish, which is one of the first things I noticed when lifting the gun from the box.  The grippy surface will be a real boon in duck blinds and other adverse hunting conditions.  While it does not appear to mar easily, I will be curious to see how it holds up through the years. 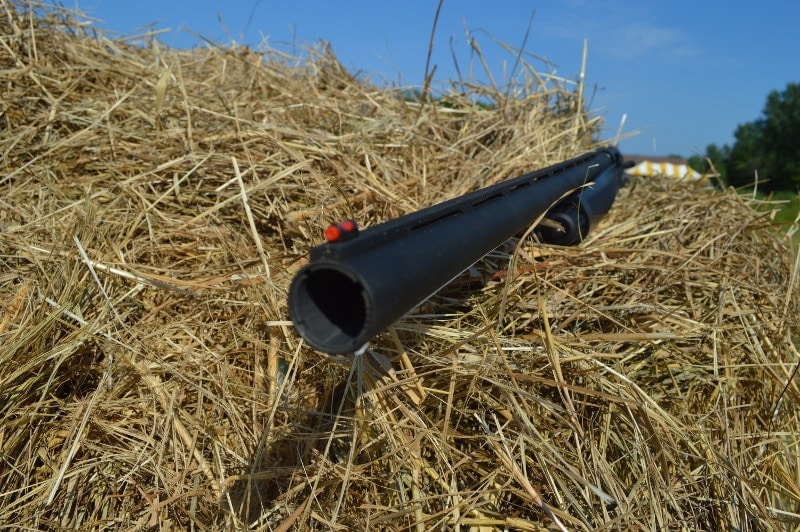 At the end of the 28-inch barrel is a fiber optic front sight, which can be swapped out for whatever color you desire (as long as it’s red or green). (Photo by Kristin Alberts)

As I’m certainly not an ambidextrous shooter, I was a tad perplexed to pull a left-handed semi-auto from the test box. Now I know how lefties feel.  But let me tell you, my left-handed shooting buddies were tickled to death because as all lefties seem to know, there’s some sort of grand shortage of left-handed semi-autos — and guns in general — coming from most manufacturers, especially at an affordable price point.

Weighing in at 6.8 pounds, the G2 initially feels a tad on the light side for handling magnum loads, but the recoil was surprisingly negligible.  I shot several tubes of Remington’s 3-inch HyperVelocity steel 1,700 fps rounds with no problem.  High five to TriStar for their gas system, which — unlike many budget-style manufacturers — is nicely machined of all metal components.

Just for kicks, we dropped a shell on the carrier to simulate a round that doesn’t lock into the tube and the gun fed and fired just dandy.  Likewise, the fit-and-finish is not only much better than I expected, in fact, I couldn’t find any cosmetic issues at all.  Now, let’s get to the best part.  The synthetic G2’s retail for $499, and are available from dealers for significantly less, though left-handed versions retail slightly higher at $549. 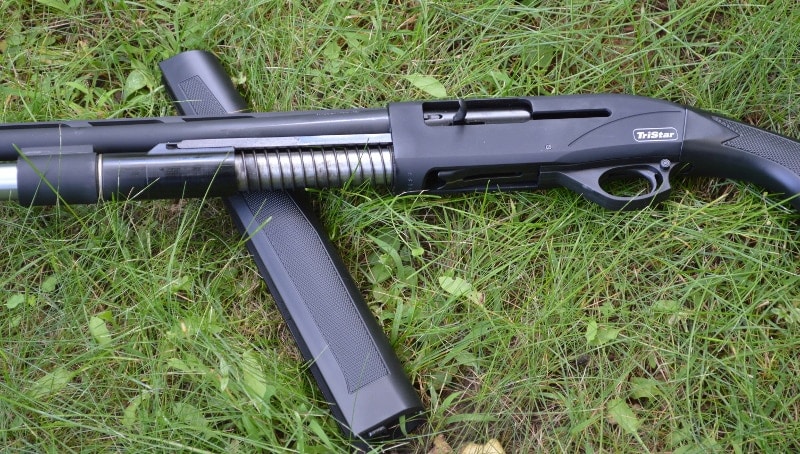 A glimpse of what the TriStar looks like underneath. (Photo by Kristin Alberts)

More reasons to check out TriStar

In addition to semi-auto sporting shotguns like the Viper line, TriStar also offers a great selection of affordable O/U’s, pumps, trap guns, tactical shotguns, an industry specific 3-1/2 inch Mag category and a new line of pistols.  Kudos to TriStar for covering the bases of the shotgun market.  There are plenty of options from wood and nickel to straight synthetic to tactical and turkey.  I most appreciate their efforts to include multiple arms chambered for 20 and 28 gauge — as well as O/U’s in 16 and 28 gauges — not to mention multiple models for both youth and lefties.  Though many shooters are yet unfamiliar with TriStar, now is the time to get acquainted with these guns.

After running upwards of 400 rounds through our test gun, no matter how hard we tried, nobody could come up with any major gripes on either fit or function.  The Viper G2 looks like a sporty steal at its price tag.  How will it hold up after 3,000 or 30,000 rounds?  Only time will tell. But from the looks of the gun inside and out, as well as the attitude of the company and their warranty, I’d be more than willing to lay down my money for a TriStar.  If value is found where price meets performance, then it looks like TriStar has earned their moniker as The Value Experts.